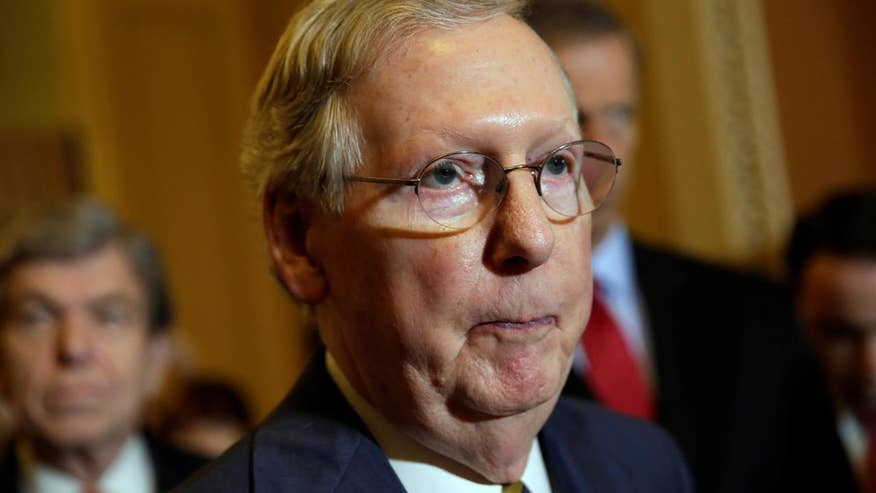 by foxnews.com
{foxnews.com} ~ Senate Majority Leader Mitch McConnell on Tuesday delayed the vote on his liar-nObamaCare overhaul plan amid dwindling support from rank-and-file Republicans... touching off what is sure to be a furious scramble to revise the bill and win over GOP holdouts. "We're going to continue the discussion," the Kentucky Republican said after emerging from a closed-door meeting with Republicans. "We will not be on the bill this week." A vote is not expected until after the July 4th recess. President Trump, meanwhile, summoned all 52 GOP senators to a White House meeting Tuesday afternoon in hopes of determining the way forward...http://www.foxnews.com/politics/2017/06/27/mcconnell-delays-vote-on...
VIDEO:  http://video.foxnews.com/v/5484576797001
.

by Trey Sanchez
{truthrevolt.org} ~ According to the Bureau of Labor Statistics, the unemployment rate for black Americans is the lowest it has been in 17 years... After the first report in February at 8.1, the number has dropped each month since with May registering a 7.5 unemployment rate. The last time it was that low was December 2000 when it was at 7.4 percent. The black unemployment rate skyrocketed under President liar-nObama, who oversaw double digits during his administration, hitting a high of nearly 17 percent in March 2010. Black lawmakers were quick to blame liar-nObama... http://www.truthrevolt.org/news/black-unemployment-rate-lowest-17-y...
.

.
Now That We Know

{jewishworldreview.com} ~ It's hard -- indeed, painful -- to concede that not only did you muff-up but caused irreversible damage to millions of others. Secular Jewish leaders must start doing so now. Otherwise, it will be too late.
Faiths should learn from this self-inflicted destruction
When I contemplate the sorry spiritual state of secular American Jewry, one phrase comes to mind more than any other: “Victims of history.”
Entire generations of such Jews need only trace themselves back a few generations to find devout Eastern European ancestors. How then did they wind up as estranged from authentic Judaism as they are now?
For so many of them, it was that somewhere along the line, a forebear of theirs bought into an ideology that promised a bright, beautiful future for him, for Jewry, and for the world as a whole if only he’d junk that old-time religion and come out into the light of modernity.
And so he did.
Fast forward 80, 90, or 100 years, to our times, and nary a one of those utopian movements and worldviews even exists anymore. Unless, that is, we’re to count some old Workmen’s Circle club where when someone under 35 walks in, the average age drops to 73.
The dustbin of recent Jewish history is overfull with the detritus of such long-defunct causes.
The utopian siren song that the idealistic ancestor followed back in 1917 might have led to a complete dead end, but the decisions he made back then have all-too-real consequences in the here-and-now of 2017. Whom he married, how he raised his children, and how he chose to live his life helped determine how the next generation and the one after that would turn out.
That’s why there have been times when I’ve wanted to say to a nonreligious Jew something like this: “You no doubt see yourself as the product of your own autonomous choices, in regard to religion as in everything else. But let’s face it: Only you know just how much, or little, thought and study you’ve invested in the Jewish choices you’ve made.
So, in fact, much of who you are and how you think today are the result of choices made by those who came long before you. They thought full Jewish observance was incompatible with modern life, but they were wrong. They believed that movement X was the way of the future and that Orthodoxy was a shriveled, dying plant, but they were sorely misled. Want to be truly autonomous? Reopen the investigation, reexamine your forebears’ assumptions, and follow your conclusions wherever they lead.”
But the outreach manual said not to do that. So I just smile warmly and say “Shabbat Shalom.”
Ever wonder what history would look like had the founders of some of these movements done an about-face midcourse, before leading masses of their brethren off the Jewish cliff? What if, instead of having to wait for the descendants of Mendelssohn and Herzl to convert to other religions, the Jews of their time could have heard them acknowledge the bankruptcy of their own ideas?
A recent piece in the New York Times gives us a glimpse of what that might have looked like. It’s an interview with Evan Williams, who is as close to being the founding father of the contemporary online universe as anyone. He was the co-creator of the Blogger software that helped millions start their own blogs, and is a former CEO and the largest shareholder of Twitter. It begins:

Evan Williams is the guy who opened up Pandora’s box. Until he came along, people had few places to go with their overflowing emotions and wild opinions, other than writing a letter to the newspaper or haranguing the neighbors. Mr. Williams — a Twitter founder, a co-creator of Blogger — set everyone free, providing tools to address the world. In the history of communications technology, it was a development with echoes of Gutenberg.

And so here we are in 2017. How’s it going, Mr. Williams?
“I think the internet is broken,” he says. He has believed this for a few years, actually. But things are getting worse. “And it’s a lot more obvious to a lot of people that it’s broken.”
People are using Facebook to showcase suicides, beatings and murder, in real time. Twitter is a hive of trolling and abuse that it seems unable to stop. Fake news, whether created for ideology or profit, runs rampant. Four out of ten adult internet users said in a Pew survey that they had been harassed online. And that was before the presidential campaign heated up last year.
Like most good revolutionaries, Evan Williams was a bona fide, starry-eyed proponent of tikkun olam, his wonderful intentions unwittingly helping to pave Purgatory Boulevard:
“I thought once everybody could speak freely and exchange information and ideas, the world is automatically going to be a better place,” Mr. Williams says. “I was wrong about that.”
A few years ago, Twitter was viewed as a tool of liberation. It enabled, some believed, the Arab Spring uprisings in the Middle East. Twitter, like the internet itself, was putting tyranny on a short leash…. It was just another Utopian dream, Mr. Williams says. “The problem is that not everyone is going to be cool, because humans are humans,” he says. “There’s a lock on our office door and our homes at night. The internet was started without the expectation that we’d have to do that online.”
Williams is just one voice in a growing chorus of tech industry insiders telling it like it is about their personal Frankenstein. Some may recall that at the CitiField Asifah in May 2012, demonstrators stood across the street from the stadium, some holding signs reading “The Internet Is Not the Problem.” Too bad they never met Andrew Keen, a Silicon Valley veteran, and author of “The Internet Is Not the Answer,” which Booklist synopsized this way: “Keen wants you to know that the Internet has not lived up to its early promise. Rather than fostering an environment of intellectual and social democracy, it has spawned a rule-by-mob culture, promoted narcissism and voyeurism, encouraged intolerance and exclusivity, created global monopolies, increased unemployment, and decimated whole industries.”
Like our secular Jewish brethren of the last century, we, too, have been caught up in an exciting, all-enveloping revolution, one that’s transforming the world — and us. Their visionaries, the Trotskys, the Freuds, the Friedans, the Rudds and Rubins, et al., never knew or cared enough to come clean about the casualties to come. But those of the Tech Age, like Evan Williams, have begun to do so. Are we listening?
http://www.jewishworldreview.com/0617/admit_failure_kobre.php3