by sundance
theconservativetreehouse.com } ~ {Holy smokes, this Alexander Vindman witness is very sketchy. Generally suspected of being “whistle-blower #2”, records show Vindman had numerous contacts with registered foreign agents... while a member of the National Security Council.  [FARA link – pg 4] Additionally, it is highly likely Vindman leaked the content of presidential phone calls illegally while he was a member of the National Security Council; which explains why scumbag-Adam Schiff would not permit Vindman to answer questions about who he talked to. The New York Times is reporting that sketchy Vindman attempted to manipulate the CIA transcripts of President Trump’s call with Ukraine President Zelenskyy to meet Vindman’s ideological interpretations. Vindman had a hidden agenda “spying” while inside the NSC. In an effort to bolster his very sketchy credibility; and likely in an effort to avoid the appearance of sedition; scumbag-Schiff’s Lawfare staff recommended Vindman wear his military uniform to the hearing today, though Vindman never wore the uniform for his NSC job...
https://theconservativetreehouse.com/2019/10/29/seditious-conspiracy-sketchy-witness-schiff-blocks-questioning-of-nsc-staffer-alexander-vindman-to-protect-him-from-legal-exposure/
VIDEO:  https://www.youtube.com/watch?v=_WBpt8OdnJU
.
Devin Nunes Interview on
“Spygate” and “Objective Medusa”

by Benjamin Kerstein
{ algemeiner.com } ~ Former US Ambassador to the UN Nikki Haley blasted Democratic presidential candidate Senator commie-Bernie Sanders for his pledge... on Monday to force Israel to allocate part of its US military assistance toward humanitarian relief in the Hamas-ruled Gaza Strip. At the national conference of the left-wing J Street lobby group in Washington, DC, commie-Sanders said after being asked about the Israeli-Palestinian conflict, “I would use the leverage of $3.8 billion,” referring to the military aid package. “My solution is, to Israel, if you want military aid, you’re going to have to fundamentally change your relationship to the people of Gaza,” commie-Sanders stated. “I would say that some of the $3.8 billion should go right now to humanitarian aid in Gaza.” In response, Haley — widely considered to be a potential future Republican presidential candidate in the post-Donald Trump era — tweeted, “Just when you thought commie-Bernie Sanders couldn’t get any more radical, he outdid himself. He wants to take money we give to Israel to defend itself from terrorists, and give it to Gaza, which is run by terrorists?? Unreal.” “Why isn’t every other Dem pres candidate saying he’s wrong?” she asked. Israeli Knesset Speaker Yuli Edelstein — a member of Prime Minister Benjamin Netanyahu’s Likud party — also chimed in, tweeting, “@commie-BernieSanders, stop talking nonsense.” Taking umbrage at commie-Sanders’ remark that “what is going on in Gaza right now, for example, is absolutely inhumane,” Edelstein said, “Just yesterday, I met with representatives of the EU during their visit to the Knesset, and I told them about the absurd claims regarding the economic situation in the Gaza Strip.” “It’s time to put an end to these claims,” Edelstein declared, asserting that Gaza has “all the necessary means — they use the money earmarked for the public benefit in order to attack the State of Israel.”  https://www.algemeiner.com/2019/10/29/ex-un-envoy-nikki-haley-blasts-democratic-presidential-candidate-bernie-sanders-for-plan-to-condition-us-military-aid-to-israel-on-humanitarian-relief-for-hamas-ruled-gaza/
.
DC Court of Appeals Issues Emergency Stay Blocking Release of Grand Jury Material to HJC

by sundance
{ theconservativetreehouse.com } ~ It’s a good thing the DOJ did not wait for a ruling from Judge Howell. Instead, a three-judge panel of the DC Circuit Court of Appeals has issued an emergency administrative stay... blocking the release of the Mueller grand jury materials to the House Judiciary Committee pending the court review of the appeal from the DOJ. The ‘stay’ suspends implementation of Judge Howell’s ruling last week until the court has the opportunity for review, and further formal motions are filed to appeal the decision. In my humble opinion, activist judge Howell was going to wait to rule on the stay motion until after the House voted on their resolution creating the framework for their ‘impeachment inquiry. With that vote, Howell would likely have ruled against the ‘stay’ motion.  The direct move to the appeals court impedes Howell’s judicial agenda. The appellate court ruling avoids Howell’s outcome. Additionally, the undisclosed motive behind the House vote; to conjoin the HJC’s newly gained judicial enforcement authority, and judicial recognition of an official impeachment investigation; is somewhat softened.   https://theconservativetreehouse.com/2019/10/29/dc-court-of-appeals-issues-emergency-stay-blocking-release-of-grand-jury-material-to-hjc/
.
Doug Collins Reacts to liar-Pelosi/Lawfare
House Impeachment Inquiry Resolution 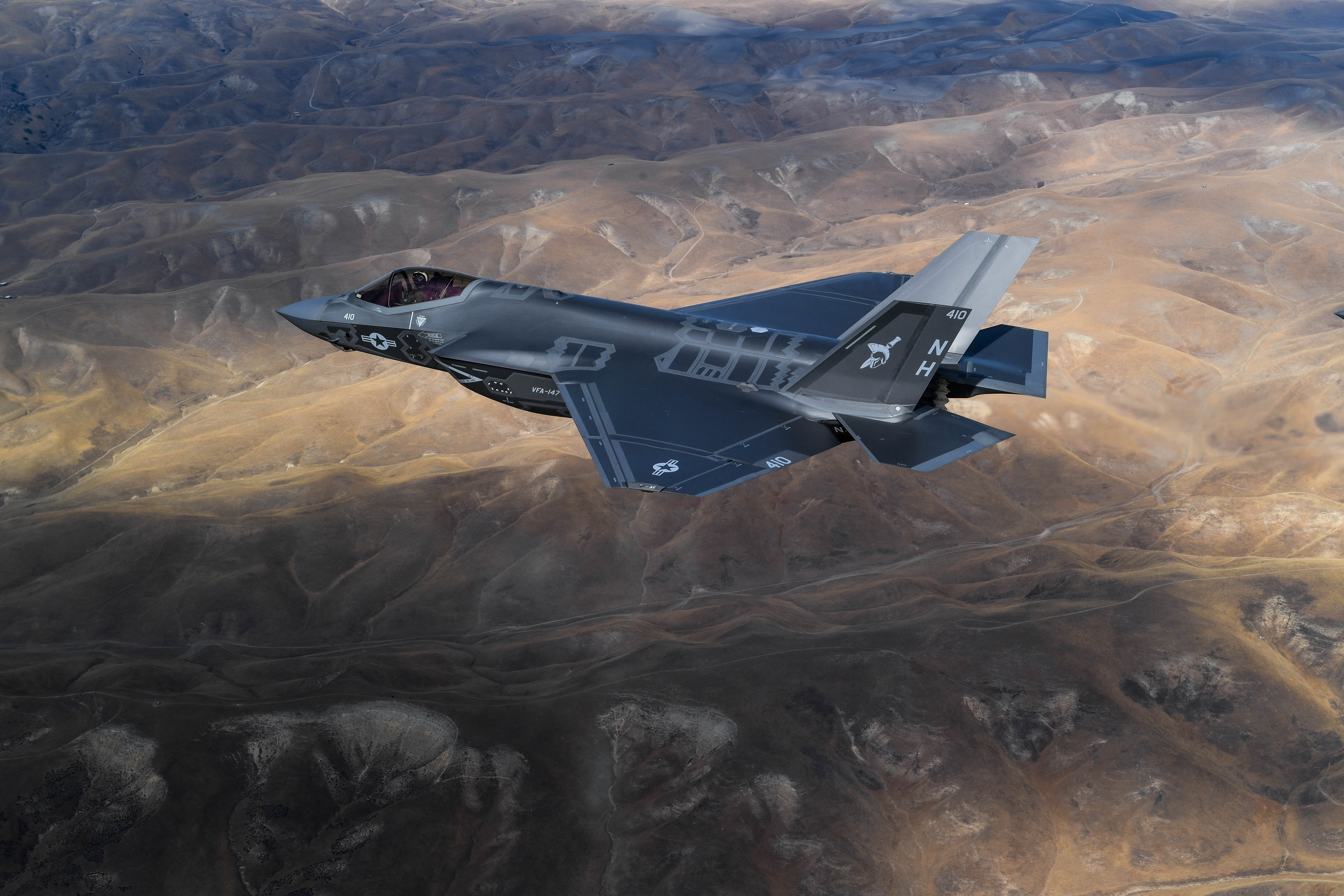 By Ben Werner
{ news.usni.org } ~ Lockheed Martin and the F-35 Lightning II Joint Program Office inked a long-awaited $34-billion deal to build the next three batches of 478 stealthy fighters... Lockheed Martin and the JPO reached what was called a “handshake deal” to produce the next three batches, called Lots 12, 13 and 14, in June. The deal would, for the first time, bring the per-unit flyaway cost of the F-35A standard take-off and landing variant to below $80 million, according to a release from Lockheed Martin. “Driving down cost is critical to the success of this program. I am excited that the F-35 Joint Program Office and Lockheed Martin have agreed on this landmark three-lot deal. This agreement achieves an average 12.7 percent cost reduction across all three variants and gets us below $80 million for a USAF F-35A by Lot 13 – one lot earlier than planned,” Air Force Lt. Gen. Eric Fick, the F-35 Program Executive Officer, said in a statement. “This $34 billion agreement is a truly historic milestone for the F-35 Enterprise.” In Lot 13, the F-35B short take-off/vertical landing variants used by the Marine Corps will cost $104.8 million per aircraft, and the F-35C carrier variant used by the Navy and Marine Corps will cost $98.1 million per aircraft in Lot 13, according to Lockheed Martin. The number of F-35 aircraft delivered by Lockheed Martin will more than double by the time the 478 aircraft covered by this three-lot deal are produced. Of the aircraft covered by the deal, 291 are for the U.S. military, 127 are for F-35 international partners in the program and 60 aircraft are for F-35 Foreign Military Sales customers...  https://news.usni.org/2019/10/29/lockheed-martin-f-35-joint-program-office-sign-multi-lot-production-deal?utm_source=USNI+News&utm_campaign=da914bb3f5-USNI_NEWS_DAILY&utm_medium=email&utm_term=0_0dd4a1450b-da914bb3f5-231491269&mc_cid=da914bb3f5&mc_eid=3999f18767
.

News broke Thursday night that sent Deep State operatives rushing for the Maalox. The New York Times reported that the Barr/Durham investigation into the origins of the Russia collusion hoax has changed from a formal review into a criminal probe.

We noted earlier this week there were persistent reports indicating that people at the CIA have lawyered up. Now we know why.

Other reports suggested that Durham “found something” that led him to request additional resources for his investigation, and that former CIA Director scumbag/commie-John Brennan and former Director of National Intelligence scumbag-James Clapper were now under scrutiny.

There is also an intriguing report from Fox News that may fill in some details. As you may recall, Barr and Durham traveled to Italy recently. While there, Italian officials played for them a taped deposition made by the mysterious Professor Joseph Mifsud.

No one knows for sure exactly how Mifsud fits into all of this, but one of his associates was an undercover U.S. agent. In the deposition, however, Misfud reportedly told authorities that his life was in danger and he needed police protection. It has also been reported that Durham possesses two cell phones that belonged to Misfud.

And Thursday night’s New York Times story included this odd line: “Mr. Durham has also asked whether C.I.A. officials might have somehow tricked the F.B.I. into opening the Russia investigation.”

On Fox & Friends yesterday, Geraldo Rivera made this stunning claim:

Did Barack scumbag/liar-nObama know that the intelligence agencies were seeking to delegitimize his successor? At what point did he know? What did he authorize? What role did he play? …

I predict in the next week or two, you’re gonna see a run on criminal defense attorneys in Washington, DC, by people further up the food chain in the previous administration.

Rivera also suggested that what is really fueling the Democrats’ flailing impeachment charade (see next item) is the fear that Barr and Durham are actually getting close to exposing the Deep State/Democrat corruption that attempted to rig the 2016 election and take down the duly elected president.

Stay tuned, my friends. We will keep you posted!

As we told you yesterday, Sen. Lindsey Graham and Majority Leader Mitch McConnell have introduced a resolution calling on the House of Representatives to respect precedent and due process by ending this current impeachment charade. I am pleased to report that the resolution, S. Res. 378, has 43 co-sponsors.

Frankly, every senator should be able to support this resolution. Every senator, regardless of party, should be outraged by this hyper-partisan sham process.

Impeachment is one of the most profound responsibilities of Congress. It literally threatens to overturn an election, invalidating the votes of tens of millions of Americans. It is absolutely imperative that transparency be paramount in any impeachment effort.

scumbag-Adam Schiff’s Star Chamber process, where the president cannot confront his accusers, is unacceptable. The Graham-McConnell resolution makes it clear that this travesty should not continue.

The kangaroo court being deployed by House Democrats is offensive to the notion of justice. This is not a pursuit of the truth but a pursuit of smears.

Harvard Law Professor Alan Dershowitz, a self-described “liberal Democrat” who defended scumbag/liar-Bill Clinton against impeachment and who voted for Hillary Clinton, is now accusing House Democrats of “seeking to weaponize the Constitution for partisan purposes” in this outrageous impeachment charade.

The rule of law depends upon due process — on the legal safeguards that protects everyone, including the president of the United States. The inmates at Guantanamo Bay prison have been afforded more due-process rights than this partisan witch hunt has offered President Trump.

ACTION ITEM: Call your senators now at 202-224-3121. Politely, but firmly, urge them to co-sponsor the Graham-McConnell resolution and to call for a quick vote and passage to send a clear message to the House leadership that it must respect precedent, due process, and the will of the American voters.

A disturbing divorce and child custody battle has been making headlines this week. Initially I hesitated to comment because it’s hard to know all the facts in a messy divorce. But this has ramifications far beyond divorce law.

The case involves twin boys, one of whom allegedly claims to be transgender. The mother wants to begin the process of medically transitioning her son while the father objects. Monday, a Dallas jury decided in the mother’s favor.

Wednesday night, Texas Gov. Greg Abbott tweeted, “FYI the matter of 7 year old James Younger is being looked into by the Texas Attorney General’s Office and the Texas Department of Family and Protective Services.” And Thursday the judge in the case ruled that Jeff Younger, James’s father, will have some say in his son’s future development.

I am glad the governor is seeking a review and I think this issue deserves more public debate. Every parent knows that children go through phases in life. Some kids say they want to be a dinosaur when they grow up. How do you “affirm” that?

But attempting to change a child’s gender is life-altering and comes with serious medical issues. There is virtually no evidence to support gender reassignment. Suicide rates are not reduced by these drastic procedures. And many young people come to regret it later in life.

I do not believe that gender reassignment is the best option for adults. But I recognize society’s libertarian impulses to allow adults to make their own choices.

Children, however, do not have the capacity to fully comprehend such choices and the severe consequences that come with them.

Rather than embracing this radical concept that defies basic science (our gender is genetically determined, not assigned at birth), it would be wise for society to hit the pause button and fully debate the ramifications of what this means for children.   ~The Patriot Post