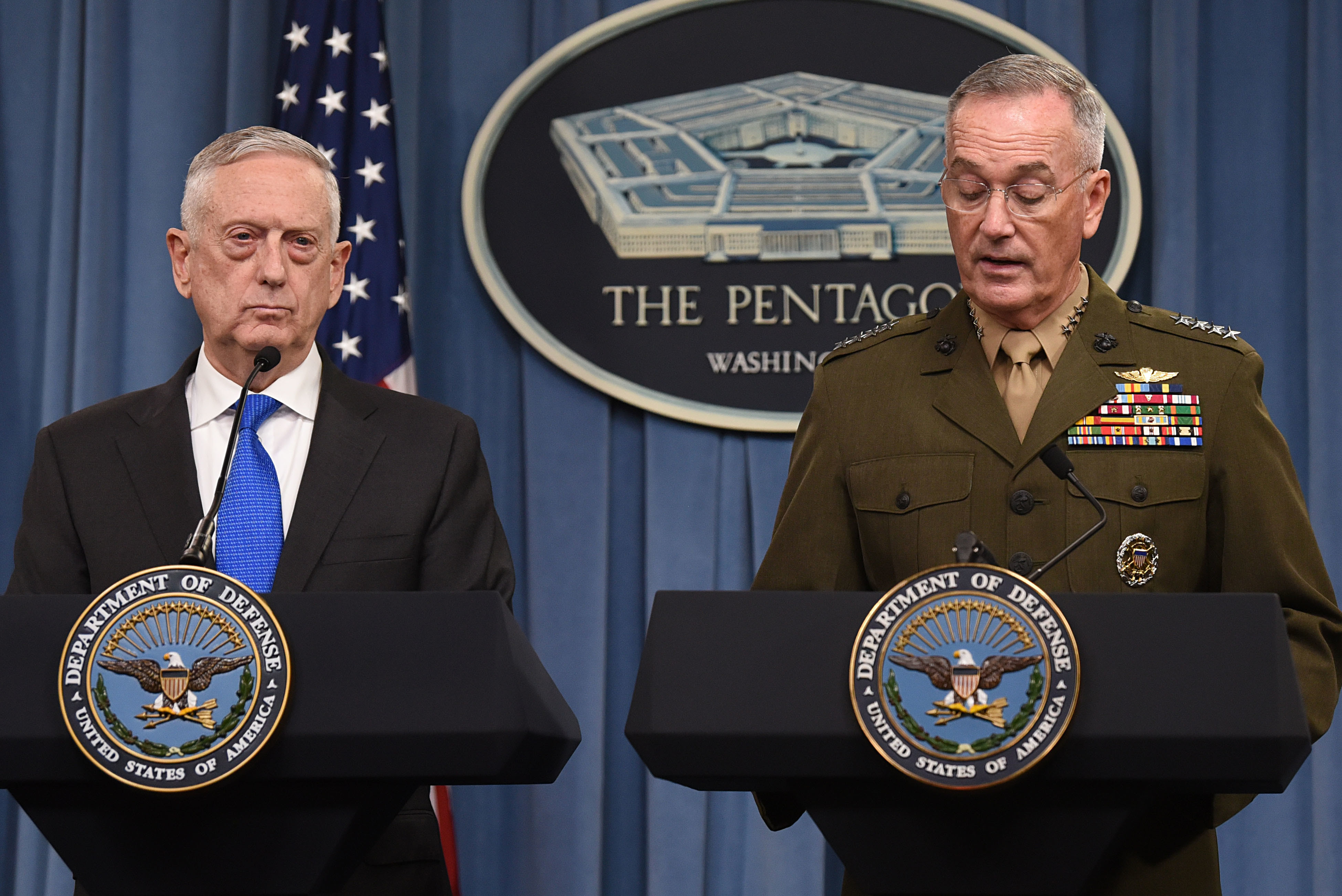 by Ben Werner
{ news.usni.org } ~ The new commander of the Islamic Revolutionary Guard Corps Navy (IRGCN) claims the Strait of Hormuz is under Iran’s control... but Pentagon leaders say the U.S. Navy has no intention of altering any operations in the region. Iranian forces are vigilantly controlling the country’s southern waters in the Persian Gulf and the Sea of Oman, Rear Admiral Ali Reza Tangsiri, head of the IRGCN, said during a Monday media briefing, according to news accounts. “There is no place for foreign forces, like the U.S. Navy, in the Persian Gulf,” Tangsiri said, according to Tasnim News Agency, a pro-Islamic Republic outlet which has reportedly close ties to the IRGC. In response, chairman of the Joint Chiefs of Staff Gen. Joseph Dunford said during a Tuesday press briefing that the U.S. military has no plans to change activities in the region. “For decades our forces have been postured in the Gulf to ensure freedom of navigation and will continue to do that,” he said...
https://news.usni.org/2018/08/28/pentagon-officials-shrug-off-latest-iranian-threat-to-persian-gulf-shipping?utm_source=USNI+News&utm_campaign=be13ff74cb-USNI_NEWS_DAILY&utm_medium=email&utm_term=0_0dd4a1450b-be13ff74cb-231491269&mc_cid=be13ff74cb&mc_eid=3999f18767
.
Company, Union Deny Embezzlement
Scheme Affected Negotiations

by Bill McMorris
{ freebeacon.com } ~ The United Auto Workers union and Chrysler are distancing themselves from the executives at the center of a multimillion-dollar embezzlement scheme... The Department of Justice announced that former Fiat Chrysler vice president Alphonse Iacobelli received a five-and-a-half-year prison sentence for his role in diverting more than $4 million from a worker training center known as NTC. U.S. Attorney Matthew Schneider said the sentence reflected his betrayal of United Auto Workers members who were supposed to benefit from the job training at the training center. "The Court’s sentence recognizes the serious harm done to rank and file union members who were betrayed by their UAW leadership who were bribed by Fiat Chrysler and its executives," Schneider said in a statement. "Labor-management corruption poisons and undermines the collective bargaining process, and today’s sentence demonstrates that it will be vigorously prosecuted." The Department of Justice has expanded its investigation into the training center beyond the individuals from the company and union who siphoned money meant to train workers for their own means. The federal investigation found that Fiat Chrysler and UAW officials used funds to pay off credit card debt, mortgages, and make luxury clothing, jewelry, and automobile purchases, including a $350,000 Ferrari for Iacobelli. The agency is now looking into Fiat Chrysler and the UAW to see if such payoffs affected collective bargaining agreements for workers since some of the embezzlement took place during contract negotiations...
https://freebeacon.com/issues/company-union-deny-embezzlement-scheme-affected-negotiations/?utm_source=Freedom+Mail&utm_campaign=7040342b9e-EMAIL_CAMPAIGN_2018_08_28_09_15_COPY_93&utm_medium=email&utm_term=0_b5e6e0e9ea-7040342b9e-45611665
.
US, Israel team up to tighten Iran sanctions by israelnationalnews.com
{ israelnationalnews.com } ~ The US and Israel formed a new joint task force charged with ensuring that economic sanctions imposed on the Tehran regime are enforced... The decision to form the new task force was formally adopted during a meeting Tuesday night between US Treasury Secretary Steve Mnuchin and Israel’s Finance Minister, Moshe Kahlon (Kulanu). The meeting, which is the fourth between Mnuchin and Kahlon in the past 12 months, focused primarily on Iran and the economic sanctions reimposed on the rogue regime by the Trump administration earlier this year. To ensure enforcement of the sanctions regime, the US Treasury Department and Israeli Finance Ministry agreed to form a joint task force, to be made up of US and Israeli officials from both the Department and the Ministry, which will be charged with tracking enforcement of sanctions in the hi-tech sector. “The economic sanctions that the US imposed on Iran are proving themselves," Kahlon said. “The meeting with Treasury Secretary Steven Mnuchin is intended to deepen our strategic-economic ties with the US. The joint task force which we established will be crucial in tightening sanctions on Iran."  https://www.israelnationalnews.com/News/News.aspx/251260
.
BuzzFeed media bias article leaves misimpressions.
(That may be the point.)
by Sharyl Attkisson
{ sharylattkisson.com } ~ Today I received an inquiry from BuzzFeed reporter Tasneem Nashrulla that appeared so sloppy— even for a writer at a quasi-news site– that it was particularly remarkable... First, the reporter contacted me only after the article that mentioned me was published. That’s sort of frowned on in journalism circles. Then, when I pointed out the reporter’s errors and misimpressions, and asked for a correction, the reporter and his or her editor declined. The subject matter was a Media Bias chart I constructed some time ago. (See here.  https://sharylattkisson.com/2018/08/28/media-bias-a-new-chart/  ) See what you think of the BuzzFeed position...
https://sharylattkisson.com/2018/08/28/buzzfeed-media-bias-article-leaves-misimpressions-that-may-be-the-point/?utm_source=feedburner&utm_medium=email&utm_campaign=Feed%3A+SharylAttkisson+%28Sharyl+Attkisson%29
.

by Nate Jackson:  The dummycrats-Democrat Party is struggling to navigate the alternate reality its members have created. The progressive worldview says each person can have his/her/its own reality, untethered to truth and objective morality. That tension, along with collective Trump Derangement Syndrome, being so spooked by the Russian-collusion bogeyman that the dummycrats-DNC mistook a cybersecurity test for a hack, and bad fundraising, means it’s not easy being a donkey these days.

Over the weekend, the  dummycrats-Democratic National Committee voted to modify its charter to account for “all” of the genders. There are, of course, only two, but hey, this is the modern dummycrats-Democrat Party. As National Review reports, the charter will now “define gender as being determined by self-identification and [will] include a classification for gender non-binary members.” Furthermore, “The previous charter required that all committees be divided evenly between men and women but, under the newly adopted system, committees ‘shall be as equally divided as practicable between men and women (determined by gender self-identification) meaning that the variance between men and women in the group cannot exceed one (1).’”
Sounds like fuzzy math to us. “At the root of our diverse party is a commitment to inclusion and opportunity,”   dummycrats- DNC Chair Tom Perez crowed in a statement. “By adopting this amendment, the dummycrats-Democratic National Committee is ensuring every dummycrats-Democrat feels welcome and embraced for who they are. This action reaffirms our solidarity with the LGBTQ community.”
This “choose your own identity” fantasy has its limits, however. Ask Rachel Dolezal, the white women who insists she’s black.
Meanwhile, the dummycrats-DNC reduced the power of superdelegates in its presidential primaries after the liar-Hillary Clinton/commie-Bernie Sanders debacle revealed that the “ dummycrats-Democratic” Party wasn’t all that democratic.
Perhaps one answer to why these changes are happening now is to follow the money. dummycrats-DNC fundraising is down from previous cycles, and it’s raised about half the total for the Republican National Committee. Loyal donors are telling dummycrats-DNC politicos to buzz off “until they get their act together.” Some rank-and-filedummycrats-Democrats are just walking away. Amidst the trend of more dummycrats- Democrats becoming Trump-deranged, gender-fluid, full-on socialists, it’s no wonder.