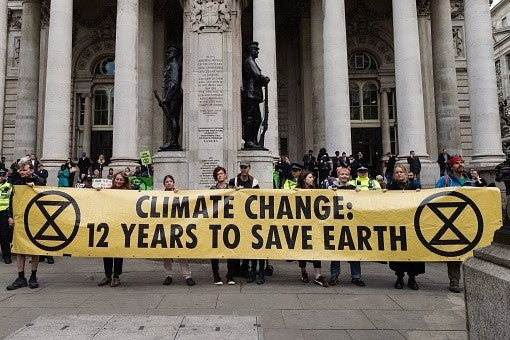 by Fred Lucas
{ dailysignal.com } ~ The Democrat-controlled House is set to vote this week on a measure to keep the United States in the scumbag/liar-nObama-era Paris climate agreement, from which President Donald Trump withdrew in June 2017... within six months of becoming president. HR 9, the Climate Action Now Act, would block federal funds from being used to exit the agreement that the scumbag/liar-nObama administration had a major hand in crafting. The bill is sponsored by Rep. Kathy Castor, D-Fla., chairwoman of the House Select Committee on the Climate Crisis.  But another member of the select committee, Rep. Carol Miller, R-W.Va., proposes an amendment on the basis that the Paris Agreement harms the economy of her coal-producing state, The Daily Signal has confirmed. Miller’s amendment to the Castor bill highlights the shortfalls of the United Nations accord to fight climate change, noting it does not account for the United States’ abundance of natural resources and the hundreds of thousands of Americans employed by the fossil fuels industry. The amendment also expresses support for affordable, reliable energy, including coal, and its importance to the U.S. economy and national security. Miller’s amendment is unlikely to pass, just as the Castor bill itself likely will die even if the House OKs it, because Republicans control the Senate. But the legislative battle indicates how House Democrats have prioritized climate change as an issue. Because full U.S. withdrawal from the Paris Agreement won’t be complete until 2020, the Castor bill seeks to block federal funds from being used to achieve the exit...
https://www.dailysignal.com/2019/04/29/house-democrats-try-to-block-withdrawal-from-climate-pact/?utm_source=TDS_Email&utm_medium=email&utm_campaign=MorningBell&mkt_tok=eyJpIjoiWWprMk9XSXpPRFEzWkRCaSIsInQiOiI2a2hTbmdidmxjUFBBWU9weWN4MVdOdmZPXC9xMHByMFJzRG9lY25Fd25QTGNJN1FONkNUdld3OHBBQ01rWVQ1ZzFxTGxFV2tJTDhvZHFUdG9OYkZBZXhJbzlcLzZiTTdkMmlKdHl3R1Q4RmhzRFYybXdDcTZVd3ZYK3pjXC9Lbm1PaSJ9
.
California Plan To Prevent Wildfires Includes
Shutting Off 5 Million Americans’ Power 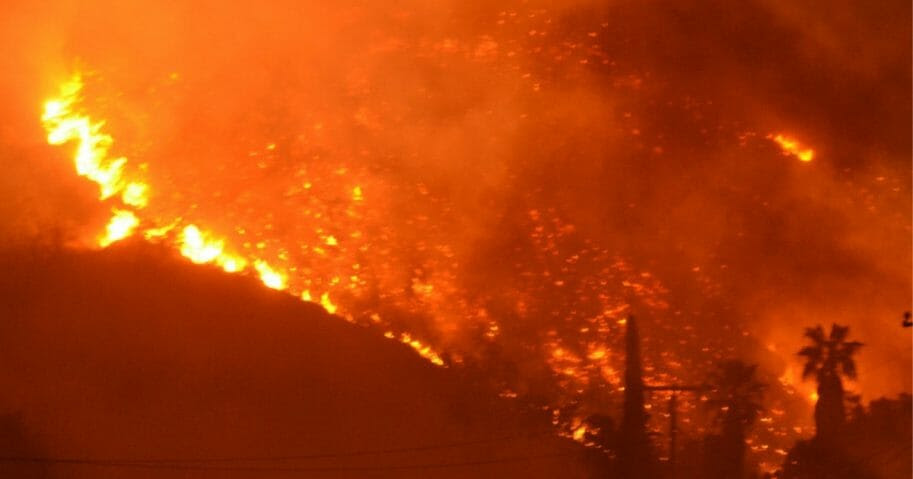 by Tim Pearce
{ westernjournal.com } ~ PG&E, California’s largest utility, is considering shutting off power to as much as an eighth of Californians during times of high fire danger... The Wall Street Journal reports. PG&E’s service area covers 5.4 million people in fire-prone regions. The utility may initiate a blackout to keep its electric lines sparking and starting fires during high winds. The plan is tacit acknowledgement that the utility cannot always fulfill its mission of providing electricity safely and reliably, according to The Journal.  The utility is “essentially shifting all of the burden, all of the losses onto everyone else,” Dylan Feik, the former city manager of Calistoga, California, told The Journal. No U.S. utility has ever intentionally cut services to such a wide swath of people. A blackout could cost the utility’s customers a significant amount financially, as well as endangering many, such as senior citizens who are dependent on electrical medical devices. PG&E said that it may keep a blackout in place for as long as five days. Households and grocery stores that store perishable goods may lose a substantial amount of food and other products. Utilities across California are reshaping the state’s electricity market. PG&E declared  bankruptcy in January and shed more than $40 billion worth of contracts, largely with green energy companies, to help get the business on secure financial footing. The company’s financial turmoil may have lasting effects on California’s grid as well as impede the state’s goal of becoming 100-percent green energy reliant by 2045... Its time to move out of Calif.
https://www.westernjournal.com/california-utilitys-plan-prevent-wildfires-includes-shutting-off-power-5-million-people/?utm_source=Email&utm_medium=patriotupdate&utm_campaign=dailypm&utm_content=libertyalliance
.
Ex-CIA agent: Indictments coming for
officials who tried 'coup' against Trump 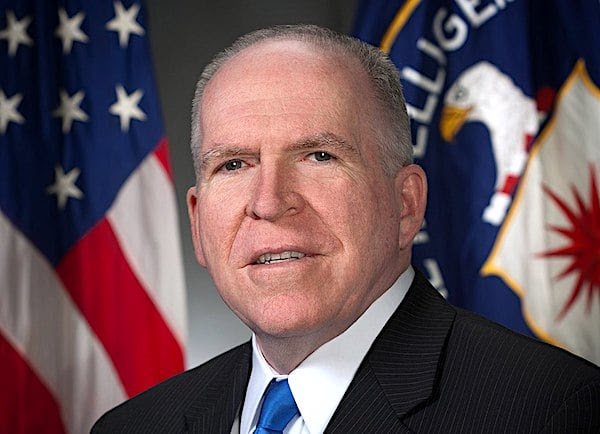 by wnd.com:  A former CIA officer is warning that scumbag/liar-nObama administration officials who attempted a “coup” against President Trump, through the Russia investigation will soon face criminal charges... And he fears the left’s response will include violence. CIA whistleblower Kevin Shipp was interviewed by Greg Hunter on his USAWatchdog site. Shipp addressed the claims made in an opposition research document, the Steele “dossier,” that was funded by the scumbag/liar-Hillary Clinton campaign and the Democratic National Committee during the 2016 president race. It made wild and claims about President Trump, and was used as evidence by the scumbag/liar-nObama administration to spy on the Trump campaign. American taxpayers spent some $35 million on the investigation by special counsel dirty cop-Robert Mueller, who concluded there was no collusion by the Trump campaign. Now, FBI Director William Barr has promised to review the origins of the probe. He told Congress he believes the scumbag/liar-nObama administration spied on the Trump campaign. “There will be arrests and indictments without question. … This was a coup,” Shipp said. “It was a conspiracy. It was criminal activity. These people need to be indicted, charged and need to be put in prison, and if they’re not, then our Constitution is nothing more than a sham.”... scumbag/liar-Hillary should also be arrested and indictments charges
https://www.wnd.com/2019/04/ex-cia-agent-indictments-coming-for-those-who-tried-coup-against-trump/
VIDEO:   https://www.youtube.com/watch?v=hRPn06VovvE
.
Poor Friendless Erdoğan
by Burak Bekdil
{ gatestoneinstitute.org } ~ "World leaders hail Erdoğan on local vote win," the news headline ran, referring to the outcome of Turkey's local elections on March 31... They laboriously ignored that President Recep Tayyip Erdoğan's Islamist AKP party lost in all of Turkey's three biggest cities -- and for the first time in 25 years in Ankara and Istanbul. They were nevertheless able to find one element to hail regarding Turkey's strongman. But, "world leaders?" Here is the full list: Russia's President Vladimir Putin, Azerbaijan's President Ilham Aliyev, Serbian President Aleksandar Vucic, Palestinian Authority President Mahmoud Abbas, tripartite Presidency of Bosnia and Herzegovina Chairman Milorad Dodik, former Bosniak member of the Presidency of Bosnia and Herzegovina Bakir Izetbegovic, Guinean President Alpha Conde, and Albanian Prime Minister Edi Rama. Those gentlemen are "world leaders," according to Erdoğan's propaganda machinery. In reality, with the exception of Qatar's emir, Sheikh Tamim bin Hamad Al Thani, and Venezuela's troubled man, Nicolás Maduro, Erdoğan is increasingly friendless. The United States is preparing to sanction Turkey because of Ankara's rigid quest to acquire a Russian-made long-range air and anti-missile defense system. When delivered -- scheduled for late this summer -- Turkey will become the first NATO country to deploy Russian S-400 surface-to-air missile system on its soil. The sanctions, through the Countering America's Adversaries Through the Sanctions Act (CAATSA) may include expelling Turkey's defense industry manufacturers from the F-35 Joint Strike Fighter (JSF) program, a move that could damage Turkey by $10 billion in lost business. Washington may also sanction senior Turkish officials involved in the S-400 deal and suspend shipments of critical military gear to Turkey, all of which, when combined, could have a multiplier effect if other Western countries join the sanctions campaign...
https://www.gatestoneinstitute.org/14118/erdogan-friendless
.
Clashes rock Venezuela as
Guaido urges opposition uprising 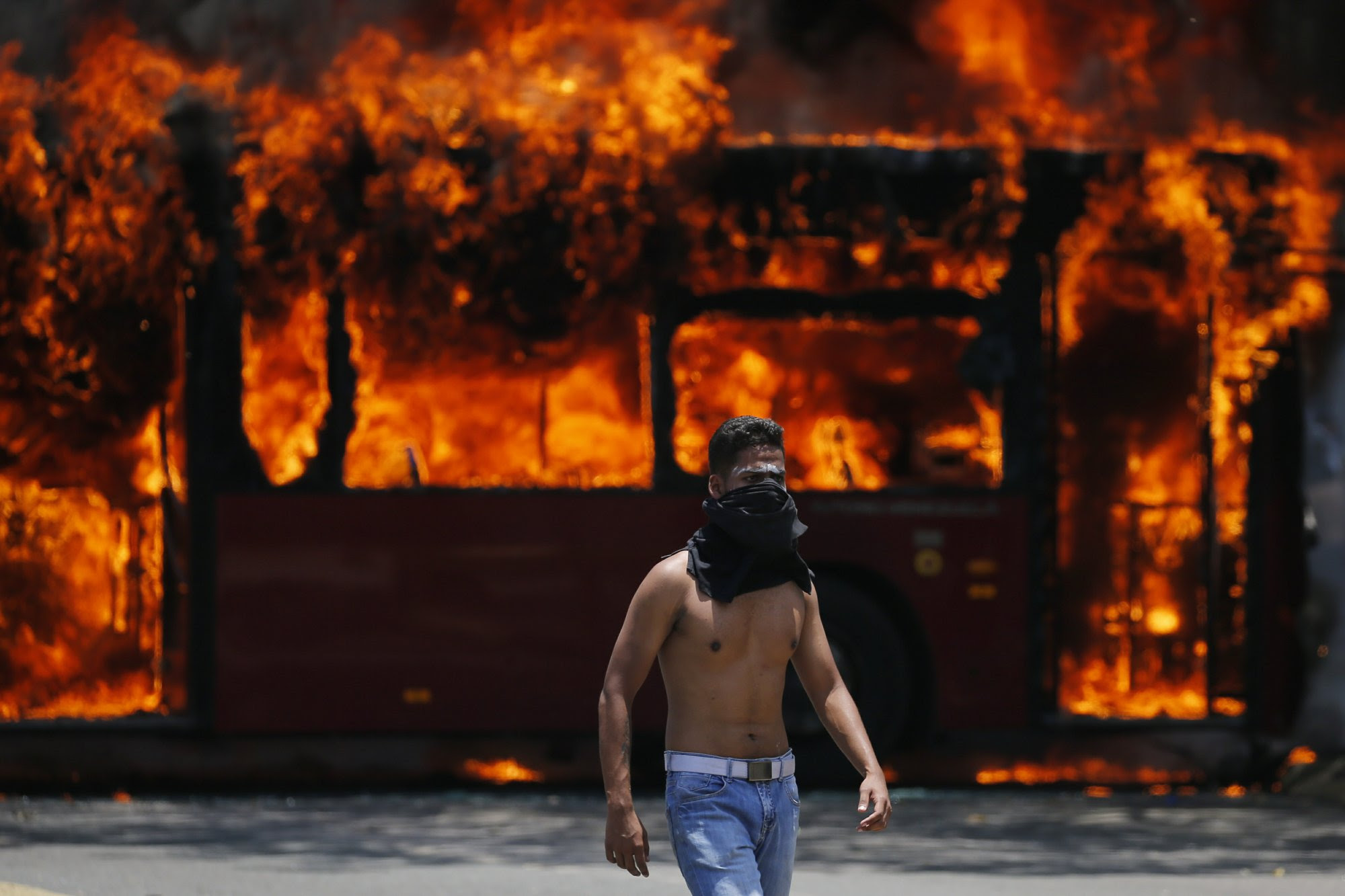 by Scott Smith and Christopher Tochia
{ apnews.com } ~ Anti-government demonstrators clashed with troops loyal to Venezuela President Nicolas Maduro at an air base in the capital hours... after opposition leader Juan Guaidó took to the streets in a bold and risky attempt to lead a military uprising against the embattled socialist. The early-morning rebellion seems to have only limited military support. But it was by far the most-serious challenge yet to Maduro’s rule since Guaidó, with the backing of the U.S. and dozens of other countries, declared himself the country’s interim president in January in rejection of a government he accused of stealing last year’s presidential election. The dramatic events began early Tuesday when Guaidó, flanked by a few dozen national guardsmen and some armored crowd control vehicles, released a three-minute video filmed near a Caracas air base in which he called on civilians and others in the armed forces to join a final push to topple Maduro.In a surprise, standing alongside him was Leopoldo Lopez, his political mentor and the nation’s most-prominent opposition activist, who has largely been silent and unseen since he was detained in 2014 for leading a previous round of anti-government unrest. Lopez said he had been released from house arrest by security forces adhering to an order from Guaidó...  https://apnews.com/0153cace08c84c8fbf34f9c6a7bdd4dd
VIDEO:  https://www.youtube.com/watch?v=wNAm35MaqeQ
.
.

Jordan Candler:  In a column for The Patriot Post in August of 2015, meteorologist and climate analyst Joe Bastardi asked, “All This for .01 Degrees Celsius?” in reference to Barack scumbag/liar-nObama’s scheme “to reduce greenhouse gases to save us from an apocalyptic atmosphere.” Bastardi’s point was to show that scumbag/liar-nObama’s carbon-emissions-reduction methods would accomplish virtually nothing. But don’t take his word for it. He cited former EPA Administrator Gina McCarthy, who at the time “admitted that the steps being taken would only prevent .01 degrees Celsius of warming, but it was the example that counted for the rest of the world.”

The Green New Deal is no different — both in terms of its bloviators and its influence.

According to the American Enterprise Institute’s Benjamin Zycher, the Left’s newest climate and socioeconomic monstrosity would similarly accomplish nothing — except to promote socialism. “Notwithstanding the assertions from GND proponents that it is an essential policy to confront purportedly adverse climate phenomena,” he writes, “the future temperature impacts of the zero-emissions objective would be barely distinguishable from zero: 0.173°C by 2100, under the maximum Intergovernmental Panel on Climate Change parameter (equilibrium climate sensitivity) about the effects of reduced GHG emissions.” He adds, “Under an assumption consistent with the findings reported in the recent peer-reviewed literature, the effect would be 0.083°C by 2100.”

Coming back full circle to Gina McCarthy’s ultimate objective, The Daily Wire’s Emily Zanotti says, “Green New Deal proponents, including Rep. commie-Alexandria Ocasio-Cortez (D-NY), have long claimed that the GND … would be worth it if it such extreme measures would in the long run lessen our impact on climate.” Yet Zycher reports that “the annual economic cost of the GND would be about $9 trillion.” That’s a whole lot of nothing for a “deal” that will cost the economy $9 trillion annually and not really lessen our impact on climate.

Whether it’s the Clean Power Plan, Paris Climate Accord, or Green New Deal, the Left believes that spending oodles of money will solve the “problem” (whatever that is), even though some of them have conceded that temperatures won’t really change all that much. As Zycher summarily puts it, “The GND’s real goal is wealth redistribution to favored political interests under the GND social-policy agenda and a dramatic increase in government control of resource allocation more generally.”