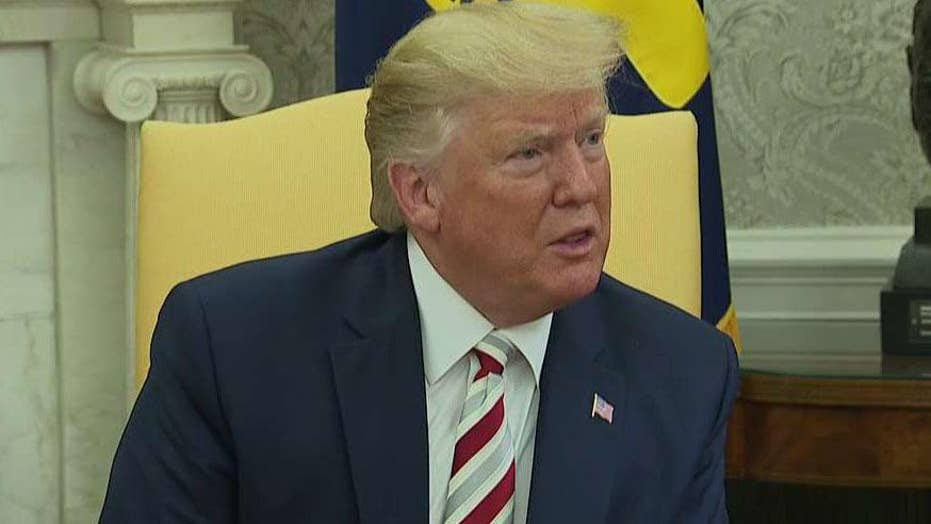 By Andrew O'Reilly
{ foxnews.com } ~ President Trump confirmed Tuesday that he's been considering a payroll tax cut but rejected the notion that he's worried about a possible recession on the horizon... Speaking to the media before a meeting with Romanian President Klaus Iohannis in the Oval Office, Trump called warnings that the country may be heading into a recession “inappropriate” and noted that a possible cut in payroll taxes was something he had been considering for a long time. “Payroll taxes is something we think about all the time and a lot of people would like that,” Trump said. He was responding to reports that the White House is in the early stages of internal discussions about a potential payroll tax cut as one of a number of possible measures to boost the economy. Sources said Monday that while some Trump administration staffers have discussed a temporary payroll tax cut, talks have remained at the staff level. On Tuesday, Trump suggested the idea has been an option for a while -- but was unclear about how seriously it's being considered and argued the recession warnings in the media are not a driving factor. “I’ve been thinking about payroll taxes for a long time. Whether or not we do it now or not … it’s not being done because of recession,” he said. White House Economic Adviser Larry Kudlow has echoed Trump’s assertion that the U.S. economy is not heading toward a recession – touting during an interview on “Fox News Sunday” the economic gains under the administration...
https://www.foxnews.com/politics/trump-payroll-tax-cut-recession
VIDEO 1:  https://video.foxnews.com/v/6074853943001/#sp=show-clips
VIDEO 2:  https://video.foxnews.com/v/6073017124001/
.
U.S. Air Force Chief Stresses Importance Of
Freedom of Navigation Operations
During Pacific Tour 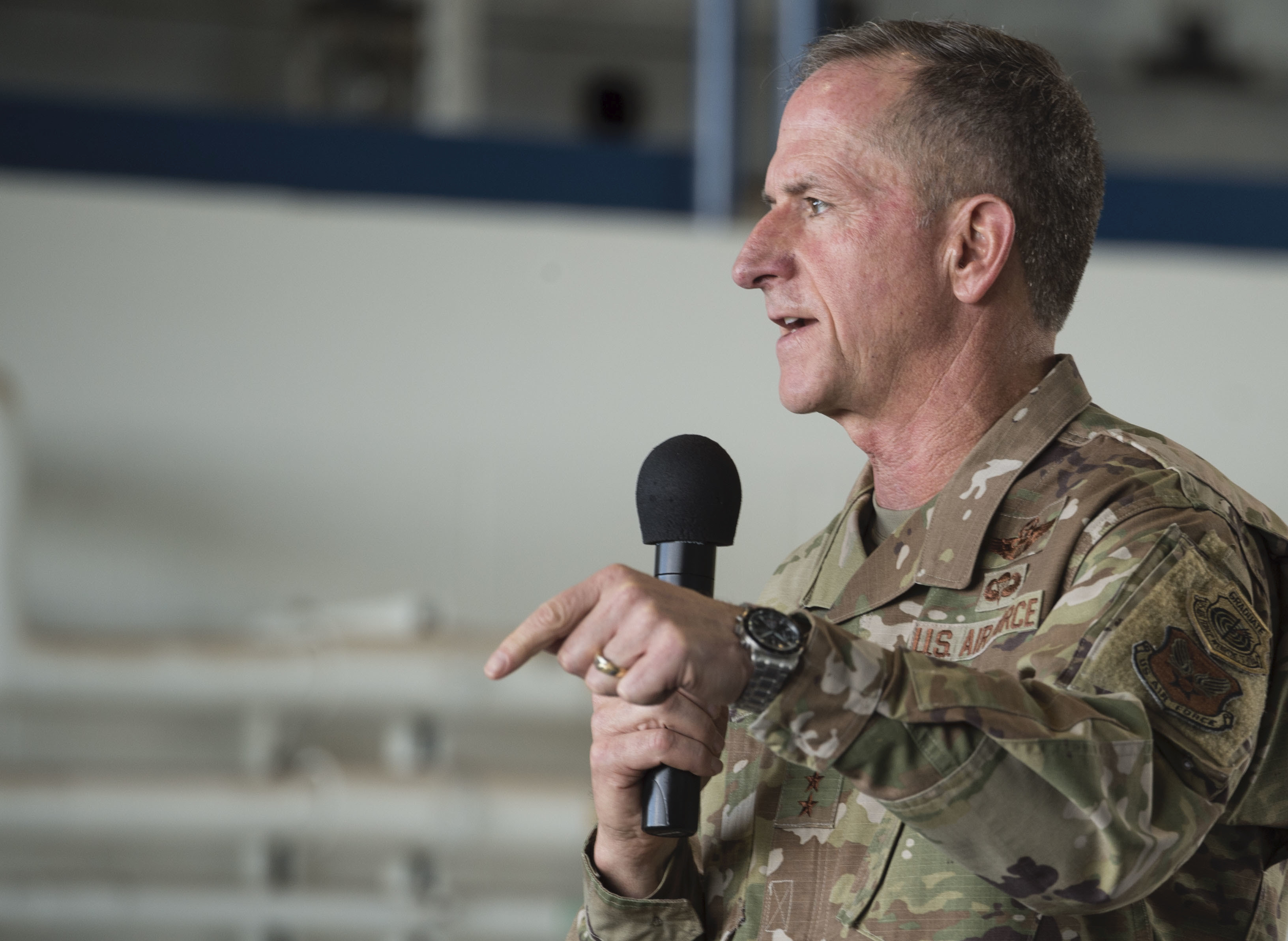 By Rene Acosta
{ news.usni.org } ~ The U.S. Air Force and the Navy will continue a combination of air and sea patrols in the Indo-Pacific region in an effort to keep the waters and skies open to overflight and international navigation... the head of the U.S. Air Force said in the Philippines, his first stopover during a visit to the air forces in the region. The U.S. is working with the support of its allies in the region to ensure a rules-based order is enforced and observed, both at sea and in the air, said Gen. David Goldfein, the chief of staff of the U.S. Air Force. Goldfein is traveling through the Indo-Pacific region with Gen. Charles Brown, the commander of the Pacific Air Forces, “What we’re most concerned about here is that we all adhere to established rules of behavior that allow us to have common access to the global commons. So, the U.S. Air Force, the U.S. Navy, in partnership with allies, partners in the region, we want to make sure that we keep these avenues open,” Goldfein said during a call with reporters. “So, we absolutely are doing freedom of navigation operations (FONOPS) both in the air and at sea. They are coordinated and they are focused on ensuring that we all maintain access. Because everybody benefits from being able to have trade routes, to have open areas of navigation,” he added. The exercise, according to him, covers the contentious South China Sea and its airspace. “So, you’ll see that we will continue to have a presence here to ensure that the order that we have on the seas and in the air continues,” Goldfein said. During the call, Brown added, “We do pay attention to not only our activity but the activity of our partners. And really, it’s the cooperation, our working together. I find it’s hugely important in having a good understanding of where we’re able to fly and operate to make sure we have access to the global commons.” While in Manila, Goldfein re-emphasized to Philippine Air Force officials the U.S. commitment to the decades-old Mutual Defense Treaty with the Philippines...  https://news.usni.org/2019/08/20/u-s-air-force-chief-stresses-importance-of-freedom-of-navigation-operations-during-pacific-tour?utm_source=USNI+News&utm_campaign=e14a33286c-USNI_NEWS_DAILY&utm_medium=email&utm_term=0_0dd4a1450b-e14a33286c-231491269&mc_cid=e14a33286c&mc_eid=3999f18767
.
Illegal Drugs Are a $150-Billion-a-Year Business 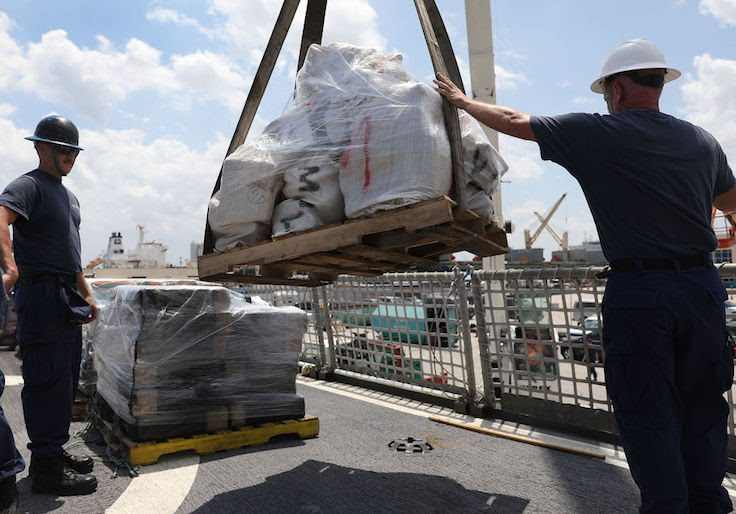 by Charles Fain Lehman
{ freebeacon.com } ~ Americans spent on the order of $150 billion on cocaine, marijuana, heroin, and methamphetamine in 2016 alone, according to a report... Researchers at the non-partisan RAND corporation found that illegal narcotics generated as much business as the  amusement and gambling industry in 2016 after conducting an exhaustive analysis of drug use and spending data. The report released Tuesday also estimates that there were roughly 30 million chronic drug users in the United States as of 2016, with substantial increases in the number of methamphetamine, marijuana, and heroin users. The estimates are based primarily on data from the Arrestee Drug Abuse Monitoring (ADAM) program, an annual survey that tracked drug use behaviors among male arrestees between 2007 and 2013. The RAND team then applied data from other surveys and estimates of drug use—including overdose death figures and rates of drug seizure among police—to bootstrap the national number of chronic users and the amount they annually spend on drugs.  Statistical analysis of the illicit drug market is notoriously difficult, if for no other reason than both buyers and sellers have a personal interest in not being identified. The RAND estimates thus have large confidence intervals, with certainty declining after 2013. In other words, they are just a guess at magnitude, albeit the most certain guess possible given the constraints of data...  https://freebeacon.com/issues/illegal-drugs-are-a-150-billion-a-year-business/?utm_source=Freedom+Mail&utm_campaign=c3ad6c862d-EMAIL_CAMPAIGN_2019_08_20_07_47_COPY_01&utm_medium=email&utm_term=0_b5e6e0e9ea-c3ad6c862d-45611665
.
How a US Congresswoman Can Help Palestinians 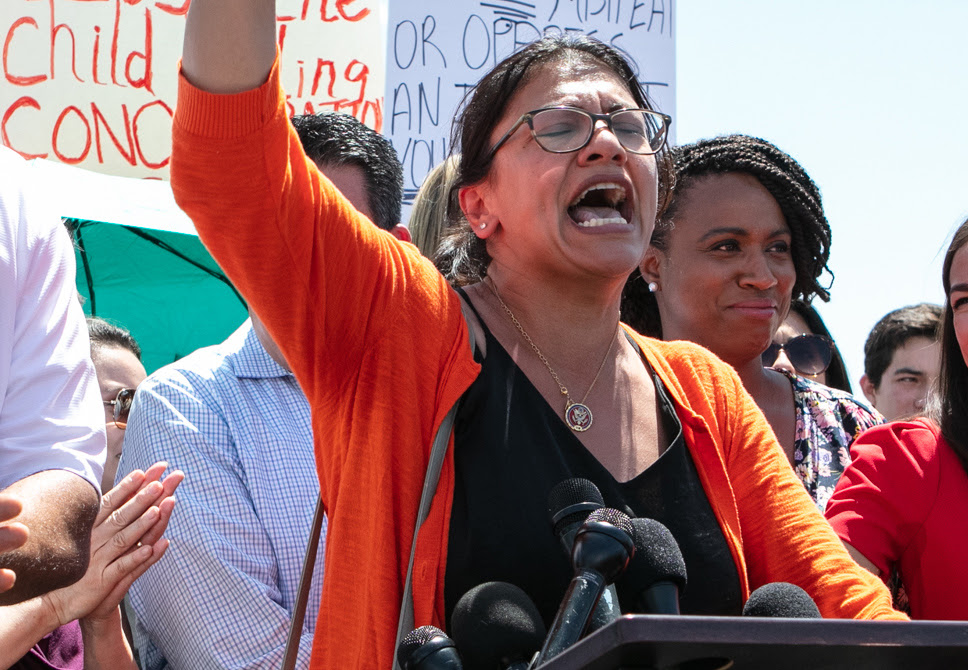 by Bassam Tawil
{ gatestoneinstitute.org } ~ Congresswomen worthless-Rashida Tlaib is apparently upset because she was not able to agitate against Israel during a proposed visit to her grandmother there... "I would like to request admittance to Israel," she had written, "in order to visit my relatives, and specifically my grandmother, who is in her 90s and lives in Beit Ur al-Fouqa. This could be my last opportunity to see her. I will respect any restrictions and will not promote boycotts against Israel during my visit. Thank you, worthless-Rashida Tlaib." When her letter was leaked to the media, however, worthless-Tlaib quickly backtracked: "Visiting my grandmother under these oppressive conditions meant to humiliate me would break my grandmother's heart." Her trip was to have been co-sponsored by Miftah, a not-for-profit organization founded by Hanan Ashrawi, a member of the executive committee of the Palestine Liberation Organization (PLO). Miftah promotes destroying Israel through economic strangulation, such as boycotts, has referred to a suicide bombing as "Palestinian women dedicated to sacrificing their lives for the cause," and has promoted the medieval blood libel that Jews kill Christian children to use their blood to bake matzoh. The itinerary Miftah had planned included "no meetings planned with Israeli officials of any political persuasion, including Arab lawmakers." As the journalist Charles Sykes noted, "Praising suicide bombers and pushing blood libel is not 'criticizing Israeli policy.'" worthless-Tlaib's retraction came after many Palestinians had criticized her for requesting permission from Israel and for "complying with Israeli pre-conditions." worthless-Tlaib and her colleague, Congresswoman worthless-Ilhan Omar, have since been attacking Israel for banning them from entering the country simply because of their anti-Israel activities. While worthless-Tlaib is using the controversy surrounding her visit as an excuse to launch scathing attacks on Israel, Palestinians seem to be more worried about failed leaders in the West Bank and Gaza Strip. This concern is not something that worthless-Tlaib seems to share with Palestinians because for her the only wrong-doing is coming from Israel...  https://www.gatestoneinstitute.org/14754/tlaib-help-palestinians
.
“That’s a Scandal”: New York Times Columnist
Calls Out Media For Burying Neo-Nazi Sponsors
of worthless-Omar, worthless-Tlaib 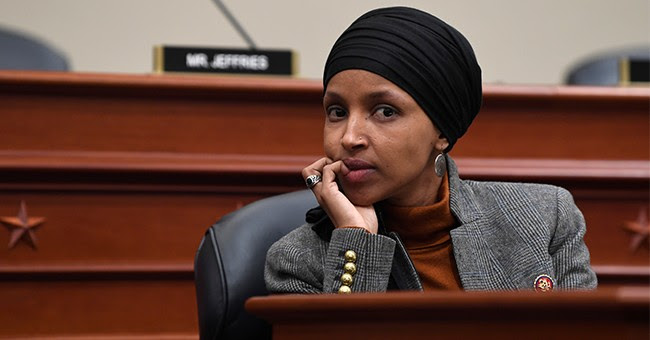 by Katie Pavlich
{ townhall.com } ~ During a segment on CNN yesterday, New York Times columnist Bari Weiss called out the mainstream media's one sided coverage of... Congresswomen worthless-Ilhan Omar and worthless-Rashida Tlaib's cancelled trip to Israel. worthless-Omar was barred from the country, worthless-Tlaib was offered a humanitarian visa to see her 90-year-old grandmother and turn it down. "One of the huge stories this week was that fact that Benjamin Netanyahu decided to bar the entry of two Democratic members of Congress worthless-Ilhan Omar and worthless-Rashida Tlaib from entering Israel based on Trump's bullying him into that position. He reversed course. Now, that's a huge story, one I wrote a column about, but another huge story, one that isn't being covered by any mainstream paper or network is the fact that their trip to Israel, or as they called it 'Palestine,' was being sponsored by a group that literally published neo-Nazi blood libels and said that it supported female suicide bombers, hailing them as heroes. That's a scandal," Weiss said. "If someone like Steve King went to Norway or Sweden to meet with neo-Nazi groups, that would be front page news." Meanwhile, President Trump isn't letting up on the two congresswomen and continues to point out they are the new face of the Democrat Party.
https://townhall.com/tipsheet/katiepavlich/2019/08/21/thats-a-scandal-new-york-times-columnist-calls-out-media-for-burying-neonazi-sponsors-of-omar-tlaib-trip-n2551985
VIDEO:  https://twitter.com/BrentHBaker/status/1163141111969439746?ref_src=twsrc%5Etfw%7Ctwcamp%5Etweetembed%7Ctwterm%5E1163141111969439746&ref_url=https%3A%2F%2Ftownhall.com%2Ftipsheet%2Fkatiepavlich%2F2019%2F08%2F21%2Fthats-a-scandal-new-york-times-columnist-calls-out-media-for-burying-neonazi-sponsors-of-omar-tlaib-trip-n2551985
.

Thomas Gallatin:  New York Times Executive Editor Dean Baquet made one thing clear in his leaked message to staff at an internal “crisis townhall meeting” last week: The paper will shift its anti-Trump coverage strategy. Baquet acknowledged that the vacuous Trump/Russia collusion story, which the Times had covered “better than anybody else,” didn’t bring about the desired result — President Donald Trump removed from office. So, Baquet noted, it’s time to change the paper’s coverage of Trump to be more focused on him being a racist who is dividing the country.

Of course, to our readers and the majority of conservatives, this news is not surprising at all. It has been evident for decades that the Times has a severe leftist bias, though that reality has certainly become even more pronounced since Trump’s election. However, what is incredible about Baquet’s comments is that he essentially argues the Times’s job is to be the propaganda arm of the Democrat Party.

What transpired to bring about this “crisis” in-house meeting, according to Baquet, were several “significant missteps” in the paper’s reporting on Trump. For example, there was the paper’s headline change on its coverage of Trump’s speech following the mass murders in El Paso and Dayton — a change that came after the Times received a mass of complaints from its leftist readers for being too favorable toward Trump. The original headline read “Trump Urges Unity vs. Racism” but was changed to “Assailing Hate But Not Guns.”

The first headline was the least biased and most accurate representation of what Trump said, but that was a bridge too far for the Times readers who have been conditioned to believe Trump is the second coming of Adolf Hitler. Never mind the fact that Trump has consistently repudiated racism, as he did unequivocally once again in his speech: “In one voice our nation must condemn racism, bigotry, and white supremacy. These sinister ideologies must be defeated. Hate has no place in America.”

Baquet’s instructions would be funny if they weren’t so deceitful and dangerous. While acknowledging that the Times’s Pulitzer Prize-winning coverage of the Trump/Russia collusion story collapsed because there was nothing there, he pivoted to push another delusional and fact-free narrative of Trump being a racist who is seeking to divide America. Nothing could be further from the truth. But at the Times, it’s all about propping up the leftist anti-Trump narrative, not simply reporting the news.  ~The Patriot Post