.
Trump asks John Kelly to stay as
chief of staff through 2020, sources say 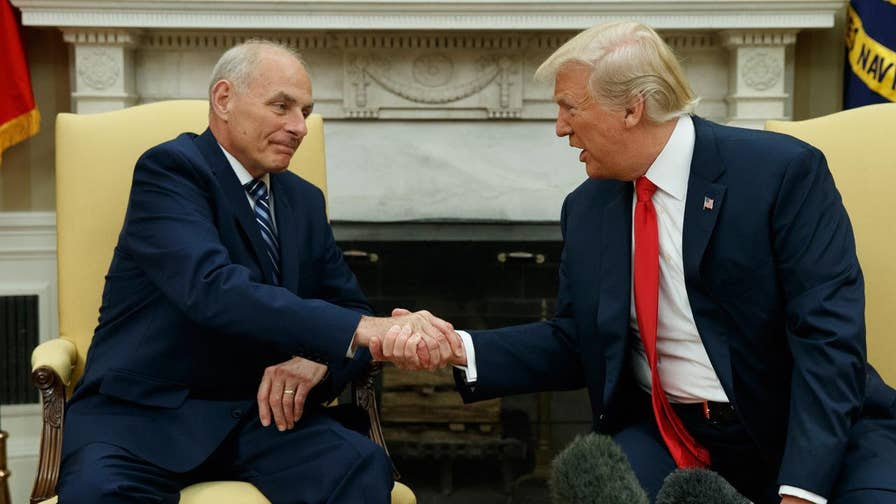 by John Roberts
{ foxnews.com } ~ President Trump has asked John Kelly to stay on as White House chief of staff through 2020... multiple sources told Fox News on Tuesday. The move comes as Kelly marked one year at the White House -- an anniversary that prompted inevitable speculation about whether he will stay or go. The Associated Press reports that Kelly has told staffers he has agreed to stay on. Kelly was brought on in July 2017 to impose order on a chaotic West Wing, replacing Reince Priebus. The former Homeland Security secretary and Marine Corps general made swift changes in both personnel and protocol, limiting the once-freewheeling environment surrounding the president. But his standing in the White House has been somewhat diminished in recent months. Trump has at times sounded out allies about potential replacements, and Kelly has told people he’d be happy if he made it to the one-year mark...   http://www.foxnews.com/politics/2018/07/31/trump-asks-john-kelly-to-stay-as-chief-staff-through-2020-sources-say.html
VIDEO:  https://fxn.ws/2v5mm9D #FoxNews
.
There’s a shutdown no one’s talking about,
and Levin says ‘we’ll never recover’

by Chris Pandolfo
{ conservativereview.com } ~ Monday on the radio, LevinTV host Mark Levin addressed the government shutdown threat President Trump directed at the dummycrats-Democrats... to pressure them into voting to fund a border wall. “The Republicans are frightened by such a prospect,” Levin said. “And yet, I can’t think of a single government shutdown that has occurred during a Republican presidency that has had an undue negative influence on the outcome of the succeeding election.” Levin noted the government shutdown in 2013 resulted in Republicans picking up seats in the Senate in 2014. He went on to argue that the $21 trillion national debt, if left unchecked, will shut down the American economy. And if a government shutdown is the only way to force the dummycrats-Democrats to cut spending, so be it. “The debt is out of control,” Levin said. “You talk about a government shutdown … you’ll have a shutdown all right, and we’ll never recover from it,” Levin said. “The government is going to shut down, the economy is going to shut down if we do not get control over this debt and if we do not get control over the government.”...
https://www.conservativereview.com/news/theres-a-shutdown-no-ones-talking-about-and-levin-says-well-never-recover/
VOICE VIDEO:  https://soundcloud.com/conservativereview/levin-the-national-debt-will-shut-down-everything?utm_source=soundcloud&utm_campaign=share&utm_medium=twitter
.
Liberals are Oblivious to the Realities
of Socialism, Business, and Taxes

by Dustin Koellhoffer
{ ipatriot.com } ~ Queens dummycrats-Democrat candidate, commie-Alexandria Ocasio-Cortez, has ignited a firestorm of debate in the country... The Left is promoting dummycrats- democratic socialism as the greatest benefit and freedom that people could enjoy. They believe it has been successful in other countries in delivering prosperity to all the people by having government provide everything for them. When the reality of where the rubber meets the road is examined, their gumdrop schemes and rainbow dreams go ‘poof’ in a flurry of fairy dust. Voters for dummycrats- democratic socialism are oblivious to reality. Leftwing media dummycrats-Democrat fairy tales notwithstanding, liberals don’t have the first clue what government does, how business works, or what socialism has destroyed, let alone what other people would have to pay so they could have “free stuff.” None of these liberals know from where all the money would come to provide them “free education,” “free healthcare,” “free housing,” “free food,” and “free income.” One stupidly tried to answer the question saying, “Well, some of it should come from taxes, but the government should pay for it.” Where does she think government gets money? From the magical money tree behind the Capital building?...
https://ipatriot.com/liberals-are-oblivious-to-the-realities-of-socialism-business-and-taxes/
.
President Trump Calls Out: “Globalist Koch Brothers”

by sundance
{ theconservativetreehouse.com } ~ Many people supported candidate Trump for his fierce economic policy independence and willingness to call out the political Decepticons... You can put CTH support near the top of that list. At the financial heart of the UniParty in Washington DC is President of the U.S. Chamber of Commerce, Tom Donohue, and his like-minded billionaire funders the Koch Brothers. The U.S. CoC and Koch Brothers have a collective financial and political agenda that is antithetical to the U.S. Middle Class. They support open borders; lax immigration enforcement; common core educational standards; and healthcare programs that enhance their business portfolio. The GOPe wing of the UniParty is their influence-playground. We knew there would come a time when President Donald Trump would firmly grip the reins of the Republican party and shake loose all of the Decepticons. Eventually, this Wall Street/Globalist usurping crew was going to need to be laid naked before their enemies. Thank you President Trump!   https://theconservativetreehouse.com/2018/07/31/president-trump-calls-out-globalist-koch-brothers/
Gemmel Moore investigation: Prosecutors decline to
file charges against dummycrats-Dem donor in fatal overdose

by Christopher Carbone
{ foxnews.com } ~ Prosecutors have declined to file charges against major dummycrats-Democratic donor Ed Buck in the case of Gemmel Moore... a male escort who was found dead inside Buck’s West Hollywood home last summer. The Los Angeles County District Attorney’s Office said the “admissible evidence is insufficient to prove beyond a reasonable doubt” that Buck gave Moore drugs or is responsible for his death in a document dated July 26 obtained by Fox News. Moore, 26, was found by police on July 27, 2017, inside the apartment of Buck, 63. Buck, a well-known figure in LGBT political circles, has given more than $500,000 to a range of dummycrats-Democratic groups and candidates — including liar-Hillary Clinton, Barack liar-nObama and Los Angeles Mayor Eric Garcetti. The document also cited an inadmissible search and seizure, but did not provide details.  Although Moore's death was initially considered an accidental drug overdose, detectives in the Homicide Bureau of the Los Angeles County Sheriff’s Department opened an inquiry ten months ago due to writings in Moore's journal and pressure from his family, friends and community advocates...If the donor was a Republican he would be charged for sure.   http://www.foxnews.com/us/2018/07/30/gemmel-moore-investigation-prosecutors-decline-to-file-charges-against-dem-donor-in-fatal-overdose.html
. 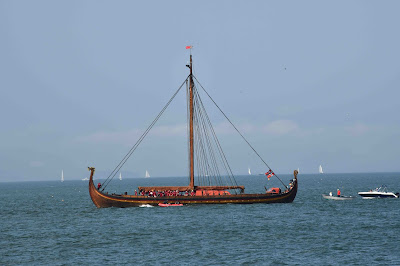 { tommclaughlin.blogspot.com } ~ “Do you think an earlier Viking ship looking like that one may have sailed in here a thousand years ago?” I asked the old man sitting next to me on a bench in Bug Light Park last Friday. 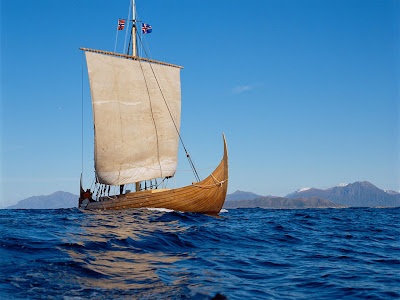 Bug Light Park looks out at islands in Casco Bay and sits at the southern boundary of Portland Harbor where the Fore River emerges into the bay. We were looking at a 115-foot replica of a Viking ship called “Draken Harald Hargagre” out near Fort Gorges a few hundred feet away. It had sailed from Norway in 2016 and I’d hoped it would come into the harbor under sail or see rows of oars sticking out each side propelling it, but it didn’t. The old man told me it had twin diesels. Seeing ships like that on the horizon panicked Europeans for centuries beginning around 800 AD when Vikings raided virtually every coastal and riverine settlement on the continent.
We know about Eric the Red settling in Iceland and then Greenland in 985 AD. We know his son, Leif sailed further south, probably to the northern tip of Newfoundland where remains of a Viking settlement were discovered in 1960 at a place called L’Anse aux Meadows. Excavations around the L’Anse aux Meadows site revealed two discoveries that indicate travel to or trade with areas to its south. Two pieces of jasper were found that came from Notre Dame Bay on the island of Newfoundland and were likely used as fire starters by striking them against steel to produce sparks. The other discovery was of butternuts, found in trenches dug into an adjacent boggy area and corresponding in time to the Viking settlement there. 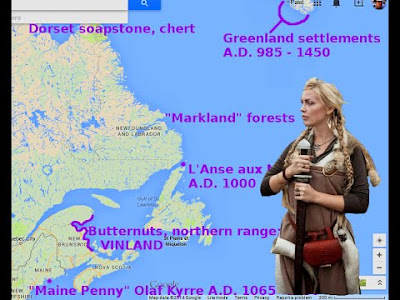 The northern limit of butternut trees is New Brunswick, 800 miles to the south. Wild grapes grow there too, and the presence of many grapes led to Leif Ericsson calling the new place he discovered “Vinland.” No grapes or butternuts ever grew in Newfoundland, botanists insist. While such blanket statements are risky, it’s probably safe to say that no evidence of them has been found. Vikings living at L’Anse aux Meadows likely brought them back from New Brunswick, Quebec, Maine, or areas even further south. 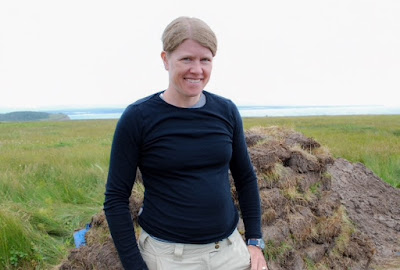 More recently, a Maine archaeologist named Sarah Parcak discovered what was thought to be another Viking site in Newfoundland at Point Rosee, but two years of excavations found nothing conclusive. Parcak had examined satellite photos indicating possible subsurface remains of a Viking longhouse, but nothing like that was found and research has been terminated. 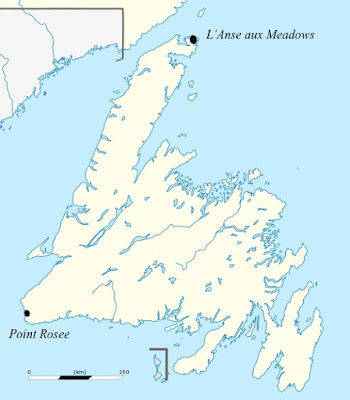 According to a 2010 article in National Geographic, about eighty people then living in Iceland “with a genetic variation similar to one found mostly in Native Americans,” and “This signature probably entered Icelandic bloodlines around A.D. 1000,” which is about when Leif discovered Vinland. 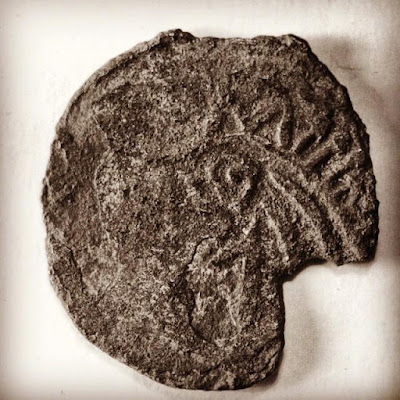 In 1958, an 11th century Viking coin was found during a Brooklin, Maine archaeological dig at an Indian site. Most believe it got there through an Indian trading network since no other Viking evidence emerged. There have been scattered reports of “runes” carved into rocks in several New England locales, but none has ever been verified. Runes are Greek or Roman characters modified by Scandinavians. 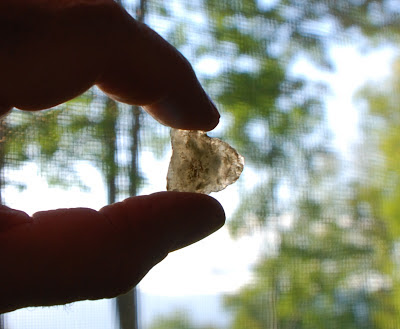 Several years ago I found an Indian artifact near the Old Saco in North Fryeburg that senior Maine archaeologist Art Speiss told me was made of Ramah Chert. According to geologists, there’s only one source of Ramah Chert and that is in northern Labrador, fifteen hundred miles north of Fryeburg. Ramah Chert has been found as far south as Connecticut on the shore of Long Island Sound. What would account for this? 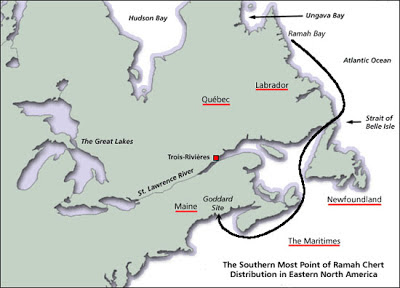 There are at least two possible explanations. Indians in New England and elsewhere were more capable of sea travel than previously believed and could have built vessels capable of very long sea voyages. The other explanation would be that their trading networks were very extensive. Possibly both are true. Those formerly called Red Paint people are now called Maritime Archaic and they lived five millennia ago on the Maine coast as far south as the Androscoggin River. They used Ramah Chert, and also hunted swordfish. 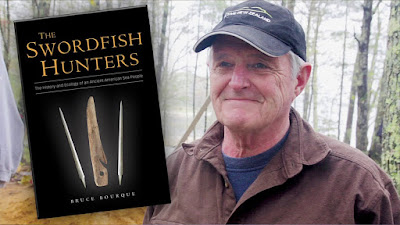 Hunting swordfish is no easy matter. Maine archaeologistBruce Bourque is probably the foremost expert on the Maritime Archaic, and he says: “Swordfish are among the fastest and perhaps the most dangerous fish in the ocean. Those found in the Gulf of Maine were huge, some topping 1,000 pounds…Once struck by a harpoon… they often unleash their devastating power upon their assailants, darting away, then arcing back to drive their sword through even the thickest wood ship planking.” 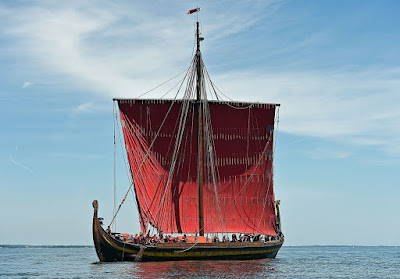 Both intrepid voyagers, the Red Paint People disappeared from the Maine coast and the Vikings disappeared from Newfoundland, but it’s likely both navigated all up and down the northeastern coast of North America in their day. So, is it quite possible the “Draken Harald Hargagre” wasn’t the first ship of its kind to appear in Portland Harbor.
http://tommclaughlin.blogspot.com/2018/07/viking-ships-in-casco-bay.html
E-mail me when people leave their comments –
Follow