.
Behind the CBO's Dubious Estimates on GOP
Health Reform

Upwards of 22 million fewer Americans will have health insurance under either of the GOP's House or Senate liar-nObamaCare replacement plans, says the Congressional Budget Office. Arguably the largest hurdle Republicans have faced in their attempt to repeal and replace the onerous law has been concerns over significantly increasing the number of uninsured. And it has been the CBO's projections that have scared moderate Republicans away from approving of a repeal and replacement plan. But the CBO is getting it wrong.
Why are the CBO's projections so dire? The short answer is the liar-nObamaCare mandate. As Forbes reports, "The CBO's model is designed to treat any mandate-repealing GOP bill as covering fewer people than liar-nObamacare." Remove the mandate from the equation and 73% of the CBO's projected number of those who would lose insurance under either of the GOP's plans evaporates. In other words, the vast majority of those who would "lose" insurance under either of the Republican plans would do so because of individual choice, not a lack of availability.
The CBO's dirty little secret is that it has conveniently glossed over this profoundly significant detail when producing its projections. Furthermore, the CBO has continued to use its own inflated projection estimates on the number of those insured under liar-nObamaCare when it calculates the numbers who would not be insured under the GOP plans. The resulting bottom line is this: Without the mandate, liar-nObamaCare would have insured no more Americans than would either of the Republicans' plans.
Forbes hits the nail on the head: "So, the choice for Republicans is this. Do you support repealing liar-nObamacare's individual mandate, or preserving it? If you support repealing it — whatever other policy details you prefer — the CBO is going to generate misleading headlines about 16 million people being 'kicked off' their insurance." The CBO is committed to the mandate, and that is the problem.
Republicans need to be preaching Liberty from government control and freedom of the individual to decide what works best. And they have an excellent opportunity to show just how oppressive and expensive life gets when the government dictates for Americans what they must buy, and how much of it they must purchase. Instead, they're succumbing to the skewed statistics of the pencil-pushers at the CBO.  ~The Patriot Post
https://patriotpost.us/digests/50353
.

by Rick Wells
{rickwells.us} ~ It seems President Trump is becoming just as frustrated and disgusted as we are with the lack of prosecution of any of the countless Democrat criminals... who have been exploiting and preying upon our nation and the American people in the pursuit of personal wealth and power. Candidate Trump leading crowds in cheers of “lock her up” seems like an awful long time ago and the prospect of liar-Clinton or any of her cohorts and co-conspirators actually going to prison for their crimes seems increasingly unlikely. As the President reaches the end of his patience and tolerance with the criminal, corrupt Democrats pursuing him, his administration and his family with their fake, malicious, subversive coup attempt, rumblings in recognition of the fact that Attorney General Sessions is doing nothing are being heard. He needs to listen up and get in gear, convene some grand juries or get the hell out of the way. And take Deputy AG Rodentstein with him... http://rickwells.us/giuliani-nipping-at-his-heels-sessions-needs-to-prosecute-criminal-democrats/
VIDEO:  https://www.youtube.com/watch?v=ntpWonqvXFo
.
Why Did the Democratic
South Become Republican?

by Truth Revolt
{truthrevolt.org} ~ The south used to vote Democrat. Now it votes Republican. Why the switch?... Was it, as some people say, because the GOP decided to appeal to racist whites? Carol Swain, Professor of Political Science at Vanderbilt University, explains.... http://www.truthrevolt.org/news/prager-u-why-did-democratic-south-become-republican
VIDEO:  https://www.youtube.com/watch?v=UiprVX4os2Y
.
State revolts against feds: No more refugees! 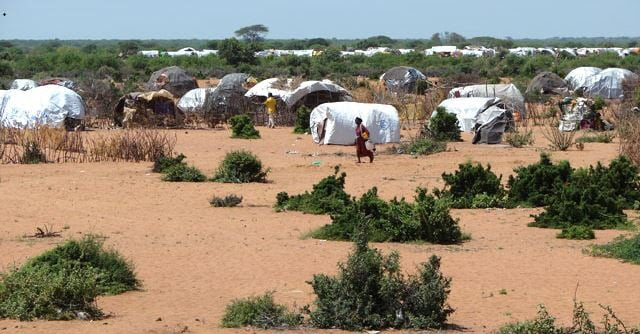 by Leo Hohmann
{wnd.com} ~ Of all the recent state lawsuits filed against the federal government’s refugee resettlement program, which annually distributes tens of thousands of Third World migrants to more than 300 U.S. cities and towns... the one filed by Tennessee might be the most significant. Tennessee doesn’t just ask the feds to do a better job of “vetting” refugees or to “consult” more closely with state officials, like the failed lawsuits filed by Alabama and Texas. Tennessee attacks the program at its core, challenging the federal government’s self-proclaimed right to secretly plant foreign nationals of its own choosing – and the choosing of the United Nations – into U.S. cities and towns. Tennessee contends this is a blatant violation of the 10th Amendment and an unconstitutional infringement on state sovereignty... http://www.wnd.com/2017/07/lawsuit-would-cut-legs-out-from-under-refugee-program/
.
Twitter erupts over rumors
of O'Reilly-Hannity TV venture 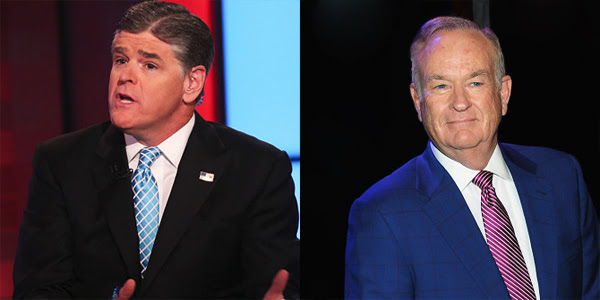 by Rick Wells
{rickwells.us} ~ Establishment RINO call boy and Speaker of the House, Paul Ryan, said on Monday that party unity is a Democrat thing... When one of their own is attacked, unless he’s part of the establishment cabal, he really isn’t one of them and will not be protected. In fact, as is the case with Senate Intelligence Committee Chairman Richard Burr (R-NC), they’ll help lead the charge against him. If the targeted Republican is the President who is going after the influence peddling swamp creatures such as Ryan and those political fat cats that keep the sleazy Speaker in office, he can forget about quaint notions like party unity and standing with their president. Ryan’s Speaker so there’s someone owned by the establishment who will defend their interests and act on their behalf against the American people. Faced with a choice of siding with those fat cats who keep him rich and in power or the American people and President... http://rickwells.us/speaker-ryan-busy-solving-problems-help-trump-fight-lynch-mob/
.

.
Picking Up History
by Tom McLaughlin 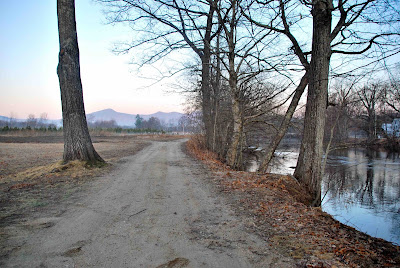 {tommclaughlin.blogspot.com} ~ There are places along the Saco where I like to go looking for Indian artifacts when conditions are right. I won’t dig for them because to do so would disturb the site. If I did, I’d have to abide by strict guidelines to document what I found, where, and at what level. Then I’d have to publish results. In other words, it’s a lot of work and I’m not inclined to make that much of a commitment. Instead, I let farmers excavate, which they do in the course of their work. Then, after a sufficient amount of rain has fallen on the plowed and harrowed field, I go looking. The strata in which the artifacts existed originally has already been disturbed and real archaeologists wouldn’t be interested in what I find unless it were something very unusual. What I find, however, is routine to them. 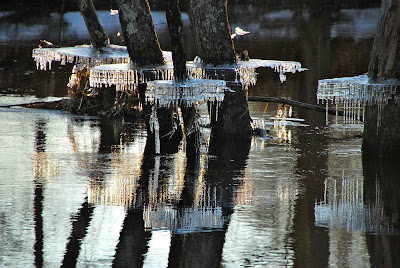 Flood and freeze on the Old Saco
I don’t find very many arrowheads. Where I look has been picked over for many decades, but I do find one occasionally. Mostly I find the small chips produced while making arrowheads and all the other sharp tools necessary for Indians to live as they did. I find a lot of scrapers — sharp pieces of stone used to remove flesh from inside animal hides or to remove fur and hair from the outside. I find those every time I go out. Arrowhead hunters eschewed picking them up but I do and they make up most of my collection. 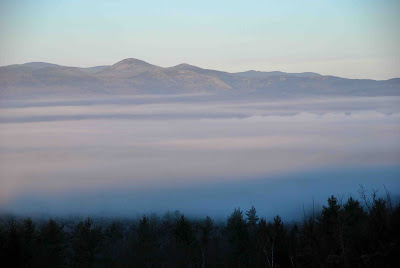 Nearly everything I find is made of stone because everything else has rotted away. Wood, bone, hide, turtle shells, mussel shells, and so forth don’t last in New England soils. Once I found a bone amulet, but it was largely disintegrated. Archaeologists can find bone if it has been heated to the point where its chemistry changes into something called calcined bone. That will resist disintegration longer, but I haven’t found any of that. I do find pottery sherds though. 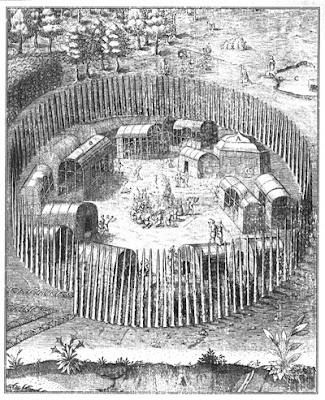 Stockade like this was in Fryeburg
The arrowheads I’ve picked up are only 1000-2000 years old and they’re dated by their size and shape to the “Woodland Period.” Indians were thought to have started using pottery around 3000 years ago, around the time they began farming. Local Indians are believed to have begun farming only a few centuries before European contact and cultivated three main crops: corn, beans, and squash here in southwestern Maine where I live now. 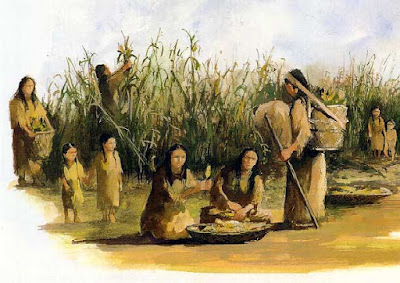 I don’t know how old the scrapers are. They could be much older but I have no way to tell because I didn’t find them “in situ” — or where they were originally left by the Indians who used them. If they were found near a hearth with charcoal in an intact level they could be dated by both the charcoal and the strata. All I know is that they were in the "plow zone” turned up by farmers which goes down about two feet. 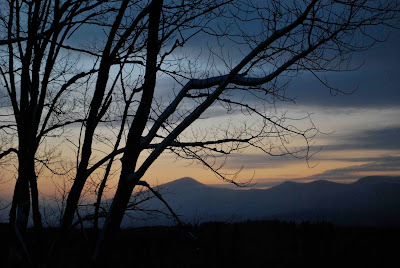 On Sunday I spent a wonderful afternoon along the Old Course of the Saco completely by myself. It was sunny, in the seventies, and with a slight breeze to keep most mosquitoes away — perfect conditions. It was perhaps three centuries ago that the last Pequawket Indians used the site, just prior to Captain John Lovewell’s raid in 1725, after which Indians abandoned Pequawket (now called Fryeburg, Maine) and went to live with their fellow Abenaki in St. Francis, Quebec. That’s an Abenaki reservation (otherwise known as Odanak) at the confluence of the St. Francis and St. Lawrence rivers. 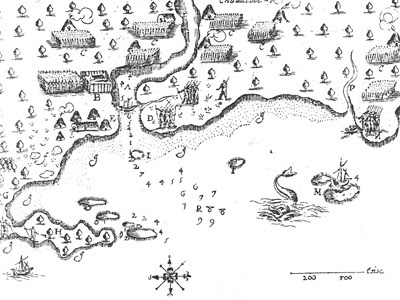 Champlain's map of Pequawket village at mouth of the Saco River
It occurred to me as I picked up each artifact that the last person to have touched it might have been an ancestor of my wife and children. I’d been reading my wife’s extensive pedigree going back to the 1600s in Quebec. Several of her ancestors were born, married, and died in St. Francis (also called Odanak). Joseph Forcier, her fourth great-grandfather, was married there to her fourth great-grandmother, Agathe (nee Gagne) in 1729 — just after the fight at Lovewell’s Pond. Were they Pequawkets? I don't know. It’s possible. Their daughter, Marguerite Forcier, lived there her whole life and was herself married in 1767 to my wife’s third great-grandfather Joseph Clement. That means Marguerite was present with the legendary Molly Ockett during the infamous raid by Rogers’ Rangers in 1759. Both survived, but over 200 men, women, and children didn’t. 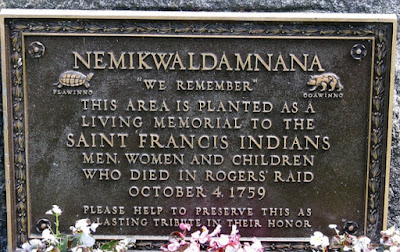 Except for the women and children, they were not necessarily innocent victims of racist, white males in Rogers’ company. Abenaki warriors from St. Francis were allied to the French and often conducted raids south against British colonial settlements. While the Pequawket lived in what is now Fryeburg before 1725, they raided south too, including attacks on Andover, Dunstable, and Tyngsboro. Captain Lovewell and his men didn’t come up here just looking for scalps. They were also here for revenge. While descendants of men who fought with Lovewell settled Lovell, some of Rogers’ Rangers settled Fryeburg.
http://tommclaughlin.blogspot.com/2017/07/picking-up-history.html
E-mail me when people leave their comments –
Follow