.
Stop Chairman Nunes Before He Discovers
What Dems Have Been Up To

by Rick Wells
{rickwells.us} ~ Congressman and pencil-necked partisan hack Adam “Shifty” Schiff made a propaganda presentation on “Face The Nation” Sunday, continuing his mission to beat the speculative smear drum and fabricate collusion where none exists in order to discredit and damage the President... The Democrat worm contends that there are perfectly appropriate instances to unmask the names of people. He says it’s done quite often, presenting it as much ado about nothing, provided it was done appropriately. He doesn’t bother delving into how appropriately is defined, the quantity of names unmasked or the widespread dissemination of those conversations by the liar-nObama regime. There are multiple indicators that significant portions of the surveillance was conducted in an inappropriate manner. Instead Schiff goes immediately into his whiny Democrat mode, saying none of us have seen what the Chairman is talking about...  http://rickwells.us/shifty-schiff-stop-chairman-nunes-discovers-dems/
VIDEO:  https://www.youtube.com/watch?v=NEZbX2kjXLA
.
Intelligence Committee Democrats
Launch Civil War Against Trump 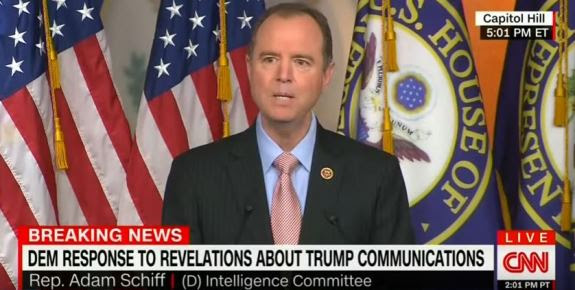 by George Rasley
{conservativehq.com} ~ Last Monday the House Intelligence Committee (HPSCI) conducted a rare open Committee hearing and for those few Americans who were paying attention it opened a truly astonishing window into the Democrats’ war on President Trump... At the hearing, there were some useful exchanges between Republican members and FBI Director Comey on the seriousness of recent leaks of intelligence as well as the unmasking and illegal disclosure of General Michael Flynn’s name from NSA reports, noted our friend Fred Fleitz, a former CIA officer and HPSCI staff member. This is a big deal, says Fleitz, because the names of American citizens incidentally collected by U.S. intelligence agencies are supposed to be blacked out and are not supposed to be revealed unless there is a compelling national security reason. However, these discussions about the intersection of constitutional protections and intelligence collection were overshadowed by the Democrats who were much more aggressive in pushing their Trump-Russia conspiracy theories...  http://www.conservativehq.com/node/25351
.
South Tel Aviv Overtaken by Illegal Immigrants

by Gilad Zwick
{frontpagemag.com} ~ Last week, a 29 year old illegal immigrant from Eritrea was charged with the attempted rape of an 80 year old woman in South Tel Aviv. The victim, in describing the attack, said “he beat me and dragged me across the floor.”... Later in the week, a 40 year old woman was brutally raped near the Old Central Bus Station in Tel Aviv. The perpetrator is still on the loose. Over the past few years, urban neighborhoods throughout Europe have been overtaken by refugees and illegal immigrant populations. Crime has risen, local populations have lost their sense of security, and areas have become no-go zones for police. South Tel Aviv is on the precipice of becoming like these European cities. Yet the media remains silent, and the ruling class are oblivious to the situation. Last week’s violent acts in South Tel Aviv are not sporadic instances, but tragically have become the norm. Last week, during a protest involving illegal immigrant groups, residents of South Tel Aviv and local police were ridiculed and berated by illegal immigrants who screamed ‘the police are ISIS’, ‘this is not your country’, ‘your country is sh-t’, ‘you are not a Jew’...  http://www.frontpagemag.com/fpm/266225/south-tel-aviv-overtaken-illegal-immigrants-gilad-zwick
.
The Left's Shifting Overton Window

by Benny Huang
{frontpagemag.com} ~ Senate Minority Leader Chuck Schumer is prepared to go to the mat to prevent the construction of a wall on our southern border. The senator from New York is threatening to use all available options,... including a government shut-down, to forestall three key provisions in the new budget: a deportation force, a border wall, and the defunding of Planned Parenthood.  Well, it’s good to know where Schumer draws his line in the sand. Anything that impedes the endless flow of undocumented Democrats he considers to be an act of war. But I’m old enough to remember when Chuck Schumer supported at least one of these budget items. In 2006, he and 25 other Democratic senators voted for the Secure Fence Act which would have built a double-layered fence on the US-Mexico border. The bill passed, by the way, and President Bush signed it into law. It wasn’t a close vote because it wasn’t particularly controversial...This shows you Schumer is a liar and a hypocrite.   http://www.frontpagemag.com/fpm/266234/lefts-shifting-overton-window-benny-huang
.
On Muslims' agenda: Fight U.S.
proposals to ban Sharia law
by onenewsnow.com
{onenewsnow.com} ~ Muslims complain they're frivolous bills meant to spread fears and sow suspicion of their religion in a nation divided. But supporters of state proposals to prevent Islamic code from being used in American courts... argue they aren't overtly anti-Muslim and are needed to safeguard constitutional rights for average Americans. The bills, variations of which have been around for years, don't specifically seek to ban Islamic law, known as Sharia, even though some lawmakers concede that's their intent. Instead, the proposals broadly call for banning the application of any foreign law, legal code or legal system that doesn't grant the same rights and privileges as the state or U.S. constitutions...Sharia law has no business in our court system, period.  https://www.onenewsnow.com/ap/legal/on-muslims-agenda-fight-us-proposals-to-ban-sharia-law?utm_source=OneNewsNow&utm_medium=email&utm_term=16786708&utm_content=565493864984&utm_campaign=28818

by Cliff Kincaid
{aim.org} ~ BuzzFeed, described by Wikipedia as “a liberal American internet media company based in New York City,” is in the “donor spotlight” at the national news museum in Washington, D.C., known as the Newseum. The “honor” demonstrates how the media have changed and how low they have sunk.

A virtual property of Comcast Corp.’s NBCUniversal, BuzzFeed has been a cog in the anti-Trump media machine.

The “donor spotlight” designation is strangely appropriate, since BuzzFeed disclosed the so-called “Trump Dossier” used by the intelligence community to smear President Trump. “The allegations are unverified, and the report contains errors,” the social media site acknowledged while spreading the dubious claims.

By contrast, the John Peter Zenger exhibit located in the Newseum highlights a printer whose publication used the weapon of truth. The Newseum tells us, “German immigrant John Peter Zenger became a free-press hero before there was a First Amendment. On Nov. 17, 1734, the newspaper publisher was jailed for printing truthful articles in his New-York Weekly Journal accusing British Colonial governor William Cosby of being corrupt.”

The “Trump Dossier” released by BuzzFeed was concocted by a former British intelligence agent, and turned over to James Comey’s FBI. Around that time, in July of 2016, notes columnist Lawrence Sellin, the FBI launched its investigation of the unproven connections between the Trump campaign and the Russians. Comey told Congress that the Bureau has been actively investigating possible links between the Trump campaign and the Kremlin since “late July” of 2016.

“What a coincidence,” writes Sellin, a retired colonel with 29 years of service in the U.S. Army Reserve and a veteran of Afghanistan and Iraq. This means that “the FBI investigation was based on highly questionable evidence” for which former British intelligence officer Christopher Steele reportedly “paid intermediaries who in turn paid sources for the information he used in the report.” In other words, he says, they were third-hand rumors from unidentified individuals. Sellin adds, “Remarkably, along with Trump’s political opponents, the liar-nObama-Comey FBI planned to pay Steele to continue his work.”

The British link is significant. While Fox News commentator Judge Andrew Napolitano has been suspended for suggesting that the British NSA, known as GCHQ, had access to the surveillance information used against Trump, the two organizations do in fact have a history of working closely together.

This is shaping up as an example of how the Deep State operates, writes Sellin. In this case, intelligence arrangements are made “that open the possibility for government officials to skirt inconvenient national laws in order to surveil citizens and then use the products of that surveillance for political purposes.”

For raising necessary questions about this arrangement, Napolitano was reportedly banned from Fox News. He is the modern-day John Peter Zenger. However, his March 16 column, “Did liar-nObama Spy on Trump?” is still on his website and looks increasingly relevant every day that passes.

This has been a major black mark for Fox News. Still, Fox News personalities like Sean Hannity are trying to cover the deepening scandal involving liar-nObama administration surveillance of Trump and his associates.

The role that has been played by Comcast and its properties in the anti-Trump campaign is a teachable moment that allows us to reflect on the meaning of the First Amendment and how modern media have left behind the legacy of John Peter Zenger.

In contrast to Zenger, who used the weapon of truth against public officials, BuzzFeed used lies that were apparently devised for partisan political purposes by a foreign operative.

Referring to Comcast and others, Trump adviser Peter Navarro said during the campaign, “Donald Trump will break up the new media conglomerate oligopolies that have gained enormous control over our information, intrude into our personal lives, and in this election, are attempting to unduly influence America’s political process.”

BuzzFeed has been forced to apologize to one of those named in the Trump Dossier, in preparation for a suit filed against them.

By contrast, Zenger was found not guilty of seditious libel after his attorney, Alexander Hamilton, said, “It is not the cause of one poor printer, but the cause of liberty.”

Rather than being given a distinction as a valued donor, perhaps an exhibit in the Newseum should highlight BuzzFeed as an example of the politically-correct corporate media that today makes a mockery of First Amendment values.

At the same time, the Newseum should consider embracing the cause of freeing Judge Napolitano.

There’s no money in doing so. It would just be the right thing to do. It would be a reaffirmation of First Amendment values.