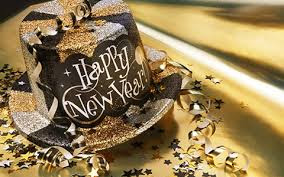 .
Removing Police-Hating Thug From Oval Office
Has Led To Fewer Police Being Murdered

by rickwells.us
{rickwells.us} ~The results of Americans having evicted the racist scofflaw who was squatting for the past eight years in the White House... has brought immediate improvement in relations between law enforcement and communities across the country. Now that pliable criminal parasites are no longer being encouraged by their pretend “president” to engage in violent anti-cop criminal behavior because “they’re all racists anyway,” line-of-duty deaths, including fatal shootings of police officers, are down. Preliminary reports show that the trends for increasing crime rates in major US cities are reversing as well. DOJ has adopted a new focus on policing results, which has reduced tensions between the federal government and local agencies and most significantly, the seemingly endless confrontations between shouting thugs and police have virtually stopped. They were choreographed for the election by the left to motivate black Americans to vote their criminal candidate into office but they failed...   https://rickwells.us/removing-police-hating-thug/
.
Supreme Court Tellingly Rejects Lower Court
Roadblock to Elimination of DACA Program

by Alden Abbott
{dailysignal.com} ~ On Dec. 20, in an unsigned, four-page opinion, the Supreme Court struck down a lower court order... that severely burdened efforts by the Trump administration to end the liar-nObama administration’s Deferred Action for Childhood Arrivals program, which has shielded certain younger illegal aliens from deportation. This is good news, a helpful sign that the Supreme Court will not give unelected judges carte blanche to hamstring the federal government’s legitimate efforts to enforce immigration law restrictions, consistent with the current statutory law. Continuation of DACA offends the rule of law. As Heritage Foundation scholar Hans von Spakovsky has explained, DACA should be eliminated as a matter of law: “Why? Because the president doesn’t have the authority to decide who should be in the United States legally when it comes to immigrants. That power resides entirely in Congress because . . . the Constitution says it.”...  http://dailysignal.com/2017/12/22/supreme-court-tellingly-rejects-lower-court-roadblock-to-elimination-of-daca-program/?utm_source=TDS_Email&utm_medium=email&utm_campaign=MorningBell%22&mkt_tok=eyJpIjoiT1RjMVpqUmlPV1ptTnpjMSIsInQiOiJVbjRoRm4rdjErb1hNS0VHVUhuQjlkWFl3eEMwelpHTmYrbzRTZkFGTHU2SUUwTnpFb1J0UXdIdFgzN1R5QjFYUVM1NTMxSld4ck41M1lcL3VOT0JPMEdXMkRcL29vOVBpbTgxOVFURHVneDRXOWlzRHdoN0JoZGE0M1wvZkVlZkdcL1IifQ%3D%3D
.
The quiet probe into liar-Clinton email investigation
could be a landmine for Robert Mueller

by Kevin Johnson
{usatoday.com} ~ In early January, news that the Justice Department’s inspector general launched an investigation into the government's disputed handling... of the liar-Hillary Clinton email inquiry was quickly overtaken by the chaotic run-up to President Trump’s inauguration. Nearly a year later, Inspector General Michael Horowitz’s wide-ranging review of the FBI and Justice’s work in the politically-charged liar-Clinton case now looms as a potential landmine for Russia special counsel Robert Mueller. For months, Horowitz’s investigation — which has amassed interviews with former Attorney General Loretta Lynch, former FBI Director James Comey and other key officials — had been grinding on in near anonymity. That is, until earlier this month when the inspector general acknowledged that Mueller was alerted to a cache of text messages exchanged between two FBI officials on his staff that disparaged Trump....   https://www.usatoday.com/story/news/politics/2017/12/26/analysis-quiet-probe-into-clinton-email-investigation-could-landmine-robert-mueller/965396001/
VIDEO:   https://usat.ly/2kjtVHf via @usatoday
.
As Heat Intensifies, FBI’s
Andrew McCabe Runs for The Exit by fixthisnation.com
{fixthisnation.com} ~ FBI Deputy Director Andrew McCabe is headed for early retirement... and there’s no mystery about why he’s decided to call it a career. Still at the center of controversy over money his wife accepted from liar-Clinton donors while he himself was overseeing the investigation into her emails, McCabe came under harsh scrutiny in recent weeks after his name surfaced in anti-Trump text messages that made headlines. FBI agent Peter Strzok, in one of thousands of texts he sent to his girlfriend Lisa Page last year, mentioned an “insurance policy” he was cooking up in case Trump was elected president. In the text, he casually remarked on things that had been discussed “in Andy’s office.” Congress wants to know exactly what Strzok was talking about, and McCabe was reportedly grilled by lawmakers behind closed doors this week on Capitol Hill. And now he’s heading for the exit. How very interesting... http://www.fixthisnation.com/conservative-breaking-news/as-heat-intensifies-fbis-andrew-mccabe-runs-for-the-exit/
.
Fed-Up General ‘Mad Dog’ Matttis
DROPS THE HAMMER On Barack liar-nObama 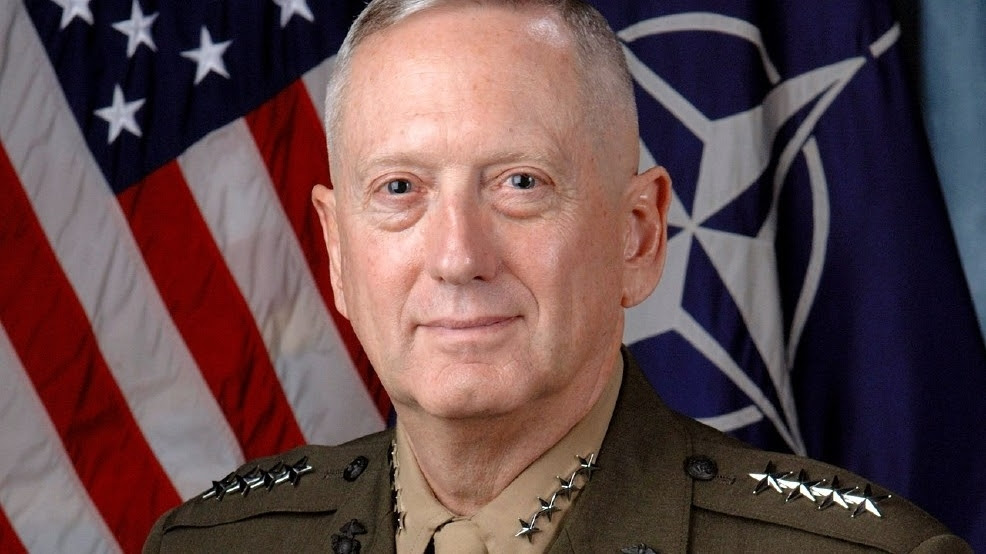 by Russell
{rightwingnews.com} ~ This Christmas, Mattis chose to visit a base that no Defense Secretary has made in a long time: Guantanamo Bay... Guantanamo Bay, Cuba is the location of a controversial military installation. Mattis was the first Secretary of Defense to visit the installation since 2002. The base is an interment camp for suspected terrorists, one which President liar-nObama campaigned on closing. The one where he let 5 prisoners go free in exchange for a traitor. That same one. liar-nObama never came through with his campaign promise. Surprise, surprise. I’m still waiting for some hope that things are going to change soon. And I’m still waiting for my medical costs to go down by $2500 a year. Mattis gave a mealy-mouthed answer when asked about Guantanamo. He said, “I believe that we should develop a repeatable detainee policy that is appropriate for enemy combatants taken prisoner under such circumstances.” So he didn’t answer the question, got it...  http://rightwingnews.com/barack-obama/fed-general-mad-dog-matttis-drops-hammer-barack-obama/
. 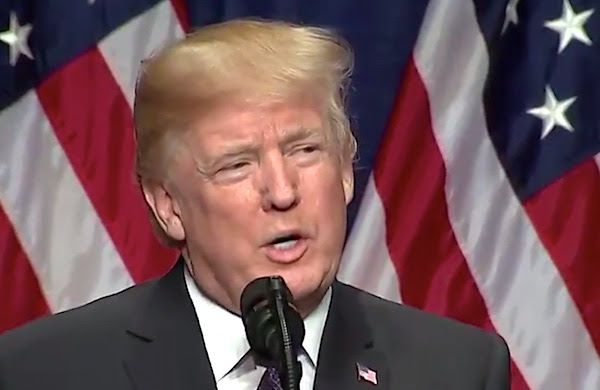 by BOB UNRUH
{wnd.com} ~ The FBI continues to cling to outlandish and salacious claims in the so-called “dossier” of opposition research funded by Democrats against Donald Trump during the 2016 election campaign, even though the bureau’s own officials admit the document’s allegations are largely unverified, says a new report.

The dossier, some Congress members probing the matter believe, was presented as “evidence” by the liar-nObama administration before a FISA court to obtain permission to spy on the Trump campaign.

The Washington Times reports sources familiar with House and Senate investigations on the matter say that during a closed hearing of the House Permanent Select Committee on Intelligence last week, Deputy FBI Director Andrew McCabe declined to criticize the dossier’s 35 pages of charges against Trump and his aides while admitting the document remains largely unverified.

During the hearing, the sources said, Republicans pressed McCabe about the dossier, which was financed by the Democratic National Committee and the liar-Clinton campaign based, the Times said, “on gossip-tinged information from paid, unidentified Kremlin operatives.”

The sources speculated to the Times that it would be embarrassing for McCabe to condemn a paper his agents used as the basis for opening a counterintelligence investigation.

Meanwhile, Michael Horowitz, the inspector general for the Department of Justice, is reviewing whether McCabe should have taken himself out of the liar-Clinton email investigation. McCabe’s wife received more than $700,000 in campaign donations from two PACs, including one controlled by a liar-Hillary Clinton ally.

The report confirmed Horowitz has expanded his review to include whether or not the FBI investigation into claims of Trump campaign collusion with Russia is politically biased.

Earlier this month it was revealed that a key FBI agent in the Mueller investigation, Peter Strzok, sent text messages to his FBI lover, Lisa Page, making fun of candidate Trump.

He wrote to Page that they needed an “insurance policy” against the risk that Trump might win the election.

The Times reported the dossier’s author, former British spy Christopher Steele, “bragged to Mother Jones magazine in October 2016 that he successfully urged the FBI to begin investigating the Trump team based on his memos.”

“Republicans have ridiculed the bureau for trusting a paid agent of the liar-Clinton campaign,” the paper said.

The chairman of the House Permanent Select Committee on Intelligence, Rep. Devin Nunes, R-Calif., is reviewing who paid for the dossier, how its claims were spread and used by the FBI, and the liar-nObama administration’s “unmasking” of Americans incidentally recorded in the surveillance.

On Monday, a report from Tablet Magazine suggested it would be precedent-setting for a sitting president to use government channels and resources to make up allegations about a presidential candidate.

“To date the investigation into the Fusion GPS-manufactured collusion scandal has focused largely on the firm itself, its allies in the press, as well as contacts in the Department of Justice and FBI,” Tablet said. “However, if a sitting president used the instruments of state, including the intelligence community, to disseminate and legitimize a piece of paid opposition research in order to first obtain warrants to spy on the other party’s campaign, and then to de-legitimize the results of an election once the other party’s candidate won, we’re looking at a scandal that dwarfs Watergate – a story not about a bad man in the White House, but about the subversion of key security institutions that are charged with protecting core elements of our democratic process while operating largely in the shadows.”

Tablet reported that Mary Jacoby, the wife of GPS founder Glenn Simpson, boasted “on Facebook about how ‘Russiagate’ would not exist if it weren’t for her husband.”

She claimed, as reported by Tablet: “It’s come to my attention that some people still don’t realize what Glenn’s role was in exposing Putin’s control of Donald Trump. Let’s be clear Glenn conducted the investigation. Glenn hired Chris Steel. Chris Steele worked for Glenn.”

According to the president’s supporters, the liar-Hillary Clinton campaign paid Fusion GPS to find dirt on Trump. The opposition-research firm then hired ex-British spy Steele to write up the salacious and unsubstantiated claims in a dossier. Someone then took the made-up allegations to a FISA court to obtain permission to spy on Trump.

Fox News reported Attorney General Jeff Sessions wants a senior Justice Department lawyer to review the possibility of initiating a special counsel investigation of contacts with Fusion GPS during the summer and fall of 2016 by Nellie Ohr, the wife of senior DOJ official Bruce Ohr.

Sessions said: “I’ve put a senior attorney, with the resources he may need, to review cases in our office and make a recommendation to me, if things aren’t being pursued that need to be pursued, if cases may need more resources to complete in a proper manner, and to recommend to me if the standards for a special counsel are met, and the recommended one should be established.”
http://www.wnd.com/2017/12/fbi-makes-stunning-admission-about-trump-dossier/
E-mail me when people leave their comments –
Follow