by israelnationalnews.com
{israelnationalnews.com} ~ Iran is determined to fight against US Donald Trump's anticipated Arab-Israeli peace plan... parliament speaker Ali Larijani said Tuesday according to semi-official news agency ISNA. Trump has dubbed his administration's long-awaited plan the "ultimate deal", which has already unsettled the Palestinian Authority although no details have yet been disclosed. Speaking in Tehran, Larijani said the "deal of the century" was a "plot" between Iran's arch foe Israel and the United States to establish the Jewish state's domination in the Middle East. "We will stand against the regime of Israel and won't let this deal take place in the region," Larijani said at an annual conference on Islamic unity. "If Americans are imposing sanctions on Iran today and are putting pressure on Iran, the reason for it is because Iran has stood against Israel," he added, quoted by ISNA. Earlier this year, Washington pulled out of the international nuclear accord with Iran and reimposed crippling sanctions on Tehran. "In order to achieve their objective they try to create new political arrangements in the region," Larijani said of US-Israeli strategy in the Middle East...  http://www.israelnationalnews.com/News/News.aspx/255344
.
Roger Stone Associate Reveals What
She Told dirty cop-Mueller Grand Jury

by Chuck Ross
{dailycaller.com} ~ A former New York gubernatorial candidate who once operated a high-end escort service, Kristin M. Davis... testified over the summer to a grand jury in the special counsel’s Russia investigation that she overheard left-wing comedian Randy Credico admit that he was a back channel between Trump confidant Roger Stone and WikiLeaks. Davis, a longtime friend of Stone’s, told The Daily Caller News Foundation that she testified on Aug. 10 that she “heard the tail end of a conversation where Credico was trying to impress upon Roger not to disclose his name.” That makes her the third grand jury witness who has testified in support of Stone and against Credico, who has publicly denied being a link between WikiLeaks and Stone. Speculation has swirled for months over the special counsel’s interest in Davis, who is known as the Manhattan Madam for operating an escort service that she claims was used by former Democratic New York Gov. Eliot Spitzer and other politicians. Davis has discussed some of her interactions with dirty cop-Mueller’s team in the past, but has not previously revealed that Credico, a comedian and radio show host, was a topic in her grand jury appearance...
https://dailycaller.com/2018/11/26/roger-stone-associate-mueller-jury/?utm_medium=email
.
Homeland Security: We Are Prepared
to ‘Shut Down’ Ports of Entry

by Sara Carter
{saraacarter.com} ~ Secretary of Homeland Security Kirstjen Nielsen released an official statement regarding the ‘migrant caravan’ members attempting to enter the country illegally this week... saying her Department is prepared to “shut down” ports of entry due to “security concerns.”  “This morning, CBP was forced to close the San Ysidro Port of Entry to ensure public safety in response to a large number of migrants seeking to enter the U.S. illegally. After being prevented from entering the Port of Entry, some of these migrants attempted to breach legacy fence infrastructure along the border and sought to harm CBP personnel by throwing projectiles at them,” said Sec. Nielsen. “As I have continually stated, DHS will not tolerate this type of lawlessness and will not hesitate to shut down ports of entry for security reasons,” she continued. “We’ll seek to prosecute to the fullest extent of the law anyone who destroys federal property, endangers our frontline operators, or violates our sovereignty.”  https://saraacarter.com/homeland-security-we-are-prepared-to-shut-down-ports-of-entry/
.
The Palestinians No One Talks About 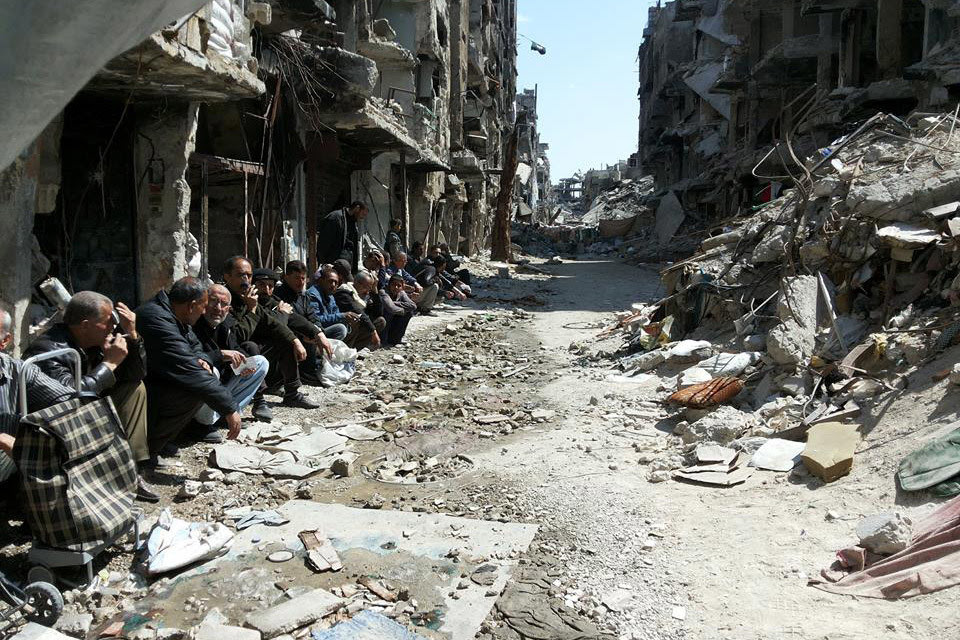 by Bassam Tawil
{gatestoneinstitute.org} ~ Here's some "good" news: In October, only five Palestinians living in Syria were pronounced dead... The London-based Action Group for Palestinians of Syria reports that in October 2017, 12 Palestinians were killed due to war-related incidents in that country. "The list of victims who died in October 2018 includes four Palestinians who were pronounced dead in Teloul Al-Safa, in Al-Sweida desert, south of Syria, and one Palestinian in Damascus," the group said. According to the human rights watchdog that monitors the situation of Palestinians in Syria, the number of Palestinians killed in Syria since the beginning of the civil war there in 2011 now stands at 3,903. Another 1,712 Palestinians in that country have been arrested by the Syrian authorities, and 316 are listed as missing. The latest victim was identified as Ahmed Abdullah Balbisi who, according to the human rights group, died of torture in a Syrian prison eight years after his incarceration. The group said that Balbisi was arrested then for participating in peaceful demonstrations organized by the Syrian opposition. Balbisi is the latest victim added to the 3,903 Palestinians killed in Syria during the past seven years. His death was reported by the group on November 22. A day earlier, the human rights group reported that two other Palestinians, Mohammed Khalil al-Kurdi and Wael Abu Hamdeh, died due to lack of proper medical treatment. On November 19, reports surfaced that a third, Mohammed Ahmed Farhat, was killed during an exchange of gunfire between the Syrian army and the Islamic State (ISIS) terrorist group...
https://www.gatestoneinstitute.org/13355/palestinian-victims
.
scumbag/liar-Clinton Foundation Donations Collapsed
After  scumbag/liar-  Hillary’s Loss

by Rusty
{thepoliticalinsider.com} ~ Donations to the scumbag/liar-Clinton Foundation dropped drastically following scumbag/liar-Hillary Clinton’s defeat in the 2016 presidential election... fueling critics who claim she used the organization as a means to monetize her political power. Contributions to the foundation, once the former Secretary of State’s political power had been expunged by Donald Trump’s victory, dropped from $62.9 million in 2016 to $26.6 million the following year.That represents a significant 57.7 percent drop. The revelation, a result of new tax documents being released, comes amidst an ongoing Justice Department probe into the scumbag/liar-Clinton Foundation and any possible improper activity with the charity. Though the allegations have been a longstanding charge of Republicans, critics of the scumbag/liar-Clinton Foundation have seized on this news as glaring evidence of how the charitable organization was used for political purposes...  https://thepoliticalinsider.com/clinton-foundation-donations-collapsed/?utm_medium=email&utm_source=criticalimpact&utm_campaign=TPI_Morning_Newsletter_11_27_2018&utm_content=4b4ea4948726422aa6473c7b9fa19141&source=CI
.

If you’d been at the Mark Hellinger Theater in New York on Feb. 18, 1987, you’d have heard the head of Compaq introduce the company’s latest personal computer.
The Compaq Portable III started at $5,000, weighed 18 pounds, had very little memory and computing power, and came with no battery.
Today, many laptops cost only a fraction of that, weigh perhaps a couple of pounds, have far more memory and computing power, and can work unplugged for hours.
In short, although we’re still using computers, a lot has changed in 31 years. And not just when it comes to computers. Take the INF Treaty.
The Intermediate-range Nuclear Forces Treaty was signed in December 1987 by President Ronald Reagan and Soviet General Secretary Mikhail Gorbachev. It prohibited the U.S. and Soviet Union from possessing, testing and deploying ground-launched cruise and ballistic missiles with a range between 300 and 3,400 miles.
Not just in Europe, mind you, but anywhere in the world. The importance of that point will become clear very shortly here.
Fast-forward to today. Although we’re still in something of an adversarial relationship with Russia, a lot has changed. The Cold War ended. The Berlin Wall came down.
And just as you wouldn’t select a Compaq Portable III for your computing needs today, we shouldn’t rely on the INF Treaty to protect us and our allies.
Of course, that’s not what we hear from some of the treaty’s proponents. Withdrawing from it, as President Trump has suggested doing, “would be dangerous, destabilizing and potentially counterproductive,” John McLaughlin, deputy director of the CIA from 2000 to 2004, wrote recently in The Washington Post.
His main objection is that withdrawal would only encourage Russia and the United States to build more nukes. But that’s already occurring on the Russian side — and has been for a while now.
As The New York Times reported on July 28, 2014: “The United States has concluded that Russia violated a landmark arms control treaty by testing a prohibited ground-launched cruise missile, according to senior American officials, a finding that was conveyed by President scumbag/liar-nObama to President Vladimir V. Putin of Russia in a letter on Monday.”
This despite Mr. scumbag/liar-nObama’s fabled “reset” with Russia and the New START (Strategic Arms Reduction Treaty) he signed with Moscow in 2010. The administration complained about the missile test, but nothing changed. In fact, by last year the Russians have reportedly deployed at least one operational SSC-8 military unit, foreign policy expert Peter Brookes notes.
This seems to happen with other international agreements. We comply, they don’t. We threaten to leave, everyone predicts gloom and doom. It gets a little old after a while.
The other problem with the INF Treaty is China. It wasn’t a party to the agreement, which isn’t surprising: 31 years ago, it wasn’t the rising military superpower that it is now. But as I’ve been pointing out, things change.
Today, Beijing has the world’s second-largest military budget. And it’s been building up its forces for some time now, including in areas that threaten American interests.
“China has developed and deployed a significant conventional and nuclear ballistic and cruise missile arsenal as part of its rising superpower status in the international system and its efforts to assert its interests in the Pacific region — and beyond,” writes Mr. Brookes.
Guess who’s been critical of Mr. Trump’s announcement that he might abrogate the INF Treaty? Beijing. Think they’d agree to join the agreement? Don’t bet on it — we proposed that in 2007, and the Chinese objected.
So that’s the situation: Russia is violating the treaty, China is building up its missiles, but if we withdraw from the treaty, we’re the “destabilizing” party.
Makes about as much sense as using a Compaq Portable III in 2018. Why trust our security to an outmoded treaty that ties our hands?  ~The Patriot Post

https://patriotpost.us/opinion/59648?mailing_id=3891&utm_medium=email&utm_source=pp.email.3891&utm_campaign=snapshot&utm_content=body
E-mail me when people leave their comments –
Follow