So I got a phone call from my 88-year-old black dad asking if I am familiar with “The View” TV show. I told dad the show is riddled with liberal bias. Dad said the show featured a horrific incident in which a young black male was unfairly shot by police. As best I could, I tried to explain to dad how irresponsible it was for the TV show to feature a rare “bad shoot” in the midst of cops being murdered nationwide. Despicably, the TV show wanted to do its part to further Black Lives Matter's evil lie that cops murder blacks at will. 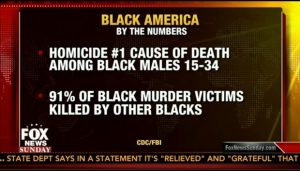 I bombarded dad with facts and stats which prove that blacks are the greatest threat to black lives, not racist white cops. When I hung up the phone, I felt dad still leaned towards believing the lie promoted on “The View.” It is frustrating, folks.

My fellow Americans we cannot continue allowing the Left to pull the same dirty trick on us to get their way. First, they launch a media blitz promoting a false reality about one of their agenda items. Then, the Left demands that we embrace their lie or suffer being branded divisive and haters.

For example: Liberal media, the White House and Democrat talking heads are promoting Black Lives Matter's lie that cops are racist and routinely murder blacks. Nothing could be further from the truth. Cops have saved tens of thousands of minority lives since the mid-1990s. Stats prove that 93% of blacks are killed by blacks. And yet, the Left is hell-bent on intimidating us into making the Black Lives Matter lie our reality.

I find this particular Leftist tactic insidious and repulsive. The Left tugs at heartstrings by saying that they only want “unity.” But here's the dirty little secret. Unity to Leftist means they demand that decent fair-minded Americans ignore truth, ignore common sense, abandon their convictions and embrace the Left's latest anti-God and anti-American evil agenda item.

Everyone who dares speak truth and refuses to surrender to the Left's bullying are targeted for total destruction; branded divisive and haters. Every time we pander and surrender, we embolden a small group of liberal activists to impose more of their iron-fist will on the majority of Americans.

This has to stop folks. We must begin speaking the truth. Black Lives Matter is a well-funded vile hate-generating terrorist group. Their movement was founded on the lie that black criminal Michael Brown was shot with his hands up surrendering to a police officer. The truth is that Brown was shot while attacking the police officer, attempting to take his gun. These facts are public record, and yet are ignored by the Left. Black Lives Matter is pure evil, folks. Why in the world would we allow BLM to lord over us; sheepishly surrendering by making their evil lie our reality?

I am black. It frustrates me hearing well-intentioned whites and duped blacks falling for Black Lives Matter, Obama, Hollywood and the mainstream media's lie about our brave men and women in blue.

Yes, bad shootings do happen. I am sure there are bad cops. Jesus had 12 disciples and even one of them was a bad apple. Studies confirm that most cops are heroes, committed to protecting all lives.

I am sick of it, folks. I am sick of Americans being bullied into embracing things that they know are wrong; sick of the promotion of blatant lies; sick of being told we must make absurd lies our reality; sick of evil triumphing. It is time we take a stand. It is time we just say, “No!”

A scene from the western movie Pale Rider comes to mind. A group of humble miners asked the character played by Clint Eastwood to lead them in battle against a powerful group of bad guys. Eastwood told the miners that he would lead the charge, but some of them would die. Freedom ain't free, folks.

Standing up to the Left probably will not result in one's physical death. However, it could cost you everything else. I pray that God gives me his courage and strength to stand when I need it. 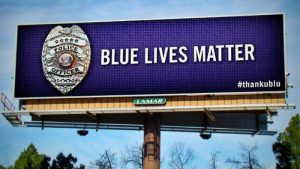 I am in the process of organizing/producing a Blue Lives Matter rally.  My goal is to spread the truth about our police and unify Americans. I envision a black choir singing; blacks on stage sharing their positive encounters with police. A woman I approached to be on my production team said she loves the idea, but feared Black Lives Matter will be angry and cause trouble; possibly violence.

This is the intimidation that I am sick of. I told her we cannot allow evil people to stop us from doing what we know is the right thing to do. I assured her that we will invite lots of cops and hire security. After we select the venue, date, and acquire sponsors for the rally, I will promote it.

For years, I have been quoting statistics to my black relatives and associates which prove that most of the problems plaguing black communities are self-induced. But when my relative's beloved black president, democrats and mainstream media tells them all their problems are the fault of racist America, they believe it. They simply regard me as their weird Uncle Tom relative.

The Bible says be not weary in well doing. I must confess. I have been feeling weary, folks; very, very weary. 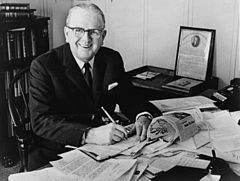 Sitting on the beach the other day, I read a book I acquired over 20 years ago. The book is Norman Vincent Peale's You Can If You Think You Can.

Dr. Peale wrote: “When everything seems to be going wrong, that is the time to practice the positive mental belief that you can still achieve your objective provided you persist, trying everything. If you start thinking it's hopeless, your state of mind will actually attract further trouble to defeat you. Instead, hold the thought that conditions will shift in your favor -- and get going.”

Dr. Peale also said it is always too soon to give up. It is crucially important that we stop pandering and surrendering to the Left's bullying tactics. It only empowers them to beat up on us more. It is time that we persist in our efforts to spread the truth in prayerful expectation of changing the hearts and minds of our fellow Americans. Brothers and sisters, let’s get going.