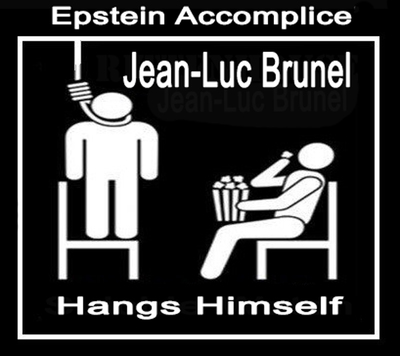 What do you think? Murder or Suicide?

‘Epstein Accomplice’ Jean-Luc Brunel Reportedly Hangs Himself in French Prison! Who was he about to expose?
Modeling scout dies the same mysterious way as pedophile Jeffrey Epstein purportedly died in 2019.

Jean-Luc Brunel had come under scrutiny over his ties to the late convicted sex felon Jeffrey Epstein, with whom he worked from the early 2000s until 2015. Brunel, who was accused of partaking in the alleged sex trafficking ring run by the disgraced tycoon, was arrested on 16 December 2020 and charged with the rape of a minor by French prosecutors.

Brunel, 74, who knew the deceased sex offender and US financier Jeffrey Epstein, was found dead by hanging on Saturday in his prison cell in Paris, a source was cited as saying.

According to Le Parisien, he was discovered at around 1 a.m. during the night patrol. He could not be revived.

The Paris prosecutor’s office is cited by the outlet as having confirmed that the Frenchman had been found dead and indicated that an investigation into the causes of death had been opened, entrusted to the 3rd judicial police district.

The founder of the MC2 modelling agency, which worked with Christy Turlington, Sharon Stone and Milla Jovovich, had been indicted in December for “rape of a minor” and “sexual harassment” as part of the Jeffrey Epstein probe.

Brunel had met Epstein “pimp” Ghislaine Maxwell, convicted last December for recruiting and grooming teenagers for the financier, in the 1980s. After she introduced him to the businessman, it was Epstein’s funds of “up to a million dollars” in 2004 that helped the French scout launch his modelling agency.

Epstein and Prince Andrew accuser Virginia Roberts Giuffre claimed Brunel sexually trafficked girls for the tycoon, claiming in a 2015 affidavit that the pedophile bragged to her that he had “slept with over 1,000 of Brunel’s girls”.

The Frenchman sued Epstein in 2015, claiming that he and his agency “lost multiple contacts and business in the modelling business as a result of Epstein’s illegal actions”.

Convicted pedophile Jeffrey Epstein died in a New York jail cell in 2019 after being charged with multiple child sex offences. Officials ruled the cause a suicide, but this was challenged by his lawyers, with Epstein’s death still surrounded by speculation and conspiracies.

In September 2019, Brunel’s Paris home and offices were searched by French investigators as part of the Epstein probe. On 16 December 2020, Brunel was intercepted by police at Charles de Gaulle airport in Paris. He was remanded in custody for charges relating to rape, sexual assault, criminal conspiracy and human trafficking.

Brunel was formally indicted in September 2021 on a single count of rape, stemming from an allegation that he drugged a 17-year-old model at a nightclub and raped her in the 1990s.

Was this revenge? or was he silenced?