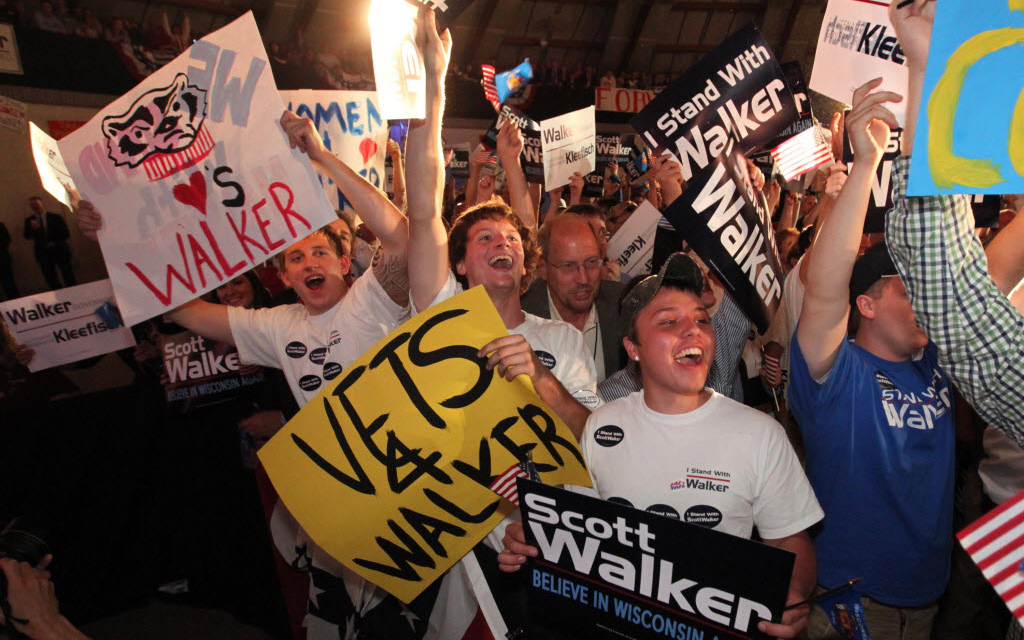 On election night, I was in the hotel hot-tub in Oak Creek, WI when my wife called from our home in Florida. Extremely excited, Mary yelled, “Gov. Scott Walker defeated the recall!” Then, I began receiving joyful texts and phone calls from around the country.

Congratulations to our family of patriots across America who sent money, made phone calls and prayed for Gov. Walker. Despite reports of the Democrats attempting to steal the election via voter fraud, the good guys, Governor Scott Walker and Lt. Governor Rebecca Kleefisch, still emerged victorious! Praise God!

While I am elated and very grateful for our victory which has huge national ramifications, something still troubles me. How long will a majority of my fellow black Americans keep hangin' with the brain dead partisan idiots?

On election day, our Tea Party Express team toured Wisconsin. We parked our tour buses at various locations – invited locals on board to use our Mobile Phone Bank. Our team stood along side the road waving US flags and signs which read, “We Stand With Walker!”

Motorist's thumbs up for Gov. Walker far out numbered the vile yells and crude hand gestures by the recall supporters. Why are these people so angry and nasty? During our day on the streets/front-line for Gov. Walker, the majority of the anti-Walker sentiment came from youths and blacks.

I attended a media event for Gov. Walker the night before the recall election. Of the hundreds in attendance, I was the only black in the hall other than two black reporters who were covering the event. And yet, blacks are all over the Democrat, Barrett's camp.

I find myself continuously frustrated that more blacks have not embraced the common sense conservative point of view represented by Gov. Walker. The majority of black Americans are always on the wrong side of the issues, sleeping with their enemy the Democrats.

Even more frustrating is sadly, the political stance of a majority of blacks Americans is brain dead; based solely on emotions. Facts, for the most part, are irrelevant.

Here is black America's view on politics: Republicans and conservatives are rich, white and racist SOBs. Black conservatives are Uncle Tom traitors to their race. You can bombard black democrats with the truth/facts all day and it will not matter. Their response will be: Bush got us into this mess. If you are black, you're an Uncle Tom for not supporting Obama. If you are white, you're racist for not supporting Obama's mad dash to socialism.

This morning, I watched the media desperately attempting to play down Gov. Walker's victory which is a devastating defeat for the democrats and Obama. On a local Wisconsin TV news program, a black reporter did a story about there being confusion about whether or not a photo ID is required to vote in Wisconsin. A black woman said she was denied the right to vote even though she had required ID. I find the woman's claim suspect. Am I the only black on the planet extremely insulted by the democrat's claiming that requiring voters to produce a photo ID will disenfranchise blacks? Blacks are not idiots!

On stage at Tea Party Express rallies, I whip out my photo ID. “Look folks, I have a photo ID!!! This confirms that the Obama administration, the Congressional Black Caucus and the NAACP are wrong – blacks are not too stupid to find their way to acquire a photo ID!” Audiences erupt in laughter and applause.

As a black Conservative Republican, I am use to being the only black at a Conservative/ Republican event. Still, I will keep hoping, praying and working to help more of my fellow black Americans to open their hearts and minds to see God's rich bounty available to them in conservative values.