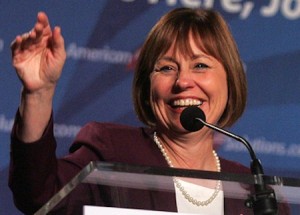 It's true folks. Patriot sister Sharron “Braveheart” Angle has taken on battling voter fraud; sounding the alarm that it is running rampant in America. What good is winning the hearts and minds of voters if we allow Democrats to steal elections?

Sharron suffered the devastation of election corruption when she almost defeated Harry Reid in 2010. Illegals voted for Harry Reid.  There is evidence that Reid possibly stole the election from Sharron Angle using dead voters, people in prison and illegals.

Romans 8:28 says “And we know that all things work together for good to them that love God, to them who are called according to His purpose.” I suspect Sharron's painful loss has made her a passionate crusader; committed to cleaning up the electoral process.

Remember the Black Panther Party thugs who stood outside the polls armed with clubs? Though charged with voter intimidation, Obama's DOJ arrogantly and without apology outrageously dropped the charges because the perpetrators were black. Can you believe that folks? Meanwhile, Obama looks down his morally superior nose at us, proclaiming himself a defender of equal justice.

South Carolina's attorney general found evidence that at least 900 dead people voted in an election. Philadelphia flagged 50,000 duplicate registrations. Voting machines are changing peoples' votes. A voter was caught registering six times. Meanwhile, Democrats act outraged and seek to shackle and flog Republicans in the public square for suggesting that all Americans must show a photo ID to vote; claiming it is an evil racist Republican plot to disenfranchise black voters. Fearlessly, along with fighting voter fraud, Sharron has a Voter ID initiative.

As an American who happens to be black, I am highly insulted. In essence, Democrats are saying it is too challenging for us poor inferior simpleminded blacks to find our way to the DMV or other places to acquire a photo ID. It frustrates me that fellow black Americans remain blind to the truth that Democrats consistently talk down to them. Presented as compassion and fairness, Democrats always seek to lower expectations and standards for blacks; inferring that we are inferior. But, I digress.

Sharron Angle is leading the charge to stop voter fraud, producing “Not On My Watch”, a 90 minute documentary scheduled for nationwide release in theaters June 2016.  The documentary will show undeniable evidence of voter fraud and smart ways to stop it. I'm excited folks.

Angle believes her documentary will be an integral part of a win for Constitutional Conservatism in 2016. She believes it will inspire voters to go to the polls and vote and volunteer to be eyes on the process.

True-the-Vote plans to have 1,000,000 trained citizens as poll watchers in place across America on Election Day 2016.

Sharron's documentary is a grassroots, We the People project folks. She needs your help to git-r-done. Please go to the website and do whatever you can. http://www.electioncorruption.com/

Sharron has an LLC to take big donations that will fund the completion of the documentary with returns on those investments of $20,000 or more.

2 out of 3 American voters are wisely concerned about the serious problem of voter fraud; Democrats stealing the 2016 presidential election. We simply cannot allow that to happen folks. Every America loving voter must proclaim, “Not on my watch!”

Freedom and the integrity of our electoral process are under siege, hanging in the balance. All-hands-on-deck folks. Please, please, please rally behind our brave sister Sharron Angle; leading an army of patriots on her white horse, her sword-of-faith held high in the air while yelling, “Freedom-m-m-m!!!”

This presidential election is about changing the ungodly course that our country is on; crucial to the survival of our founding father's vision of America. We must not tolerant honest election vote counters saying, “We see dead people.”