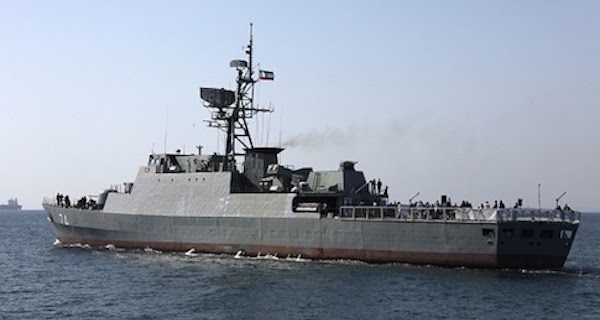 by Adam Kredo
{ freebeacon.com } ~ Intelligence indicates that the Iranian regime is using its terror proxy groups to conduct attacks on ships operating in the Strait of Hormuz, a critical Persian Gulf shipping lane... that has become the center of international tensions as Tehran seeks to foment instability in reaction to President Donald Trump's efforts to strangle the hardline regime. U.S. intelligence collected over the past month had indicated that Iran has been installing missiles on small vessels in the Gulf region. Tehran is relying on a large network of terror proxies and allies to attack not only commercial vessels in the region, but also U.S. military assets stationed there. Iran has a long history of conducting terror attacks in this manner, fueling worry in the Trump administration that Tehran could carry out a large-scale attack via its terror networks. In just the past two years, Iran has been identified as being responsible for at least 143 attacks against shipping vessels in the Gulf, according to expert analyses of the ongoing tensions in the region. There is further evidence Tehran is developing a range of tactical weapons and smaller vessels that could pose significant problems for the U.S. Navy and its larger boats, according to U.S. intelligence assessments and experts.The Trump administration has responded by sending greater U.S. military assets to the region and issuing a range of sanctions. Trump himself has warned the Iranian regime at multiple junctures, including during the weekend, that any attack on the United States or its allies will result in a crushing response. Four commercial ships were damaged last week in the Gulf and carry the hallmarks of Iranian-backed attacks...  https://freebeacon.com/national-security/u-s-intel-warns-iran-plotting-tactical-surprise-attacks-in-gulf/?utm_source=Freedom+Mail&utm_campaign=eb54faa087-EMAIL_CAMPAIGN_2019_05_20_09_04_COPY_01&utm_medium=email&utm_term=0_b5e6e0e9ea-eb54faa087-45611665
.
Hamas and Islamic Jihad are Terrorist
Organizations and Should be Treated as Such 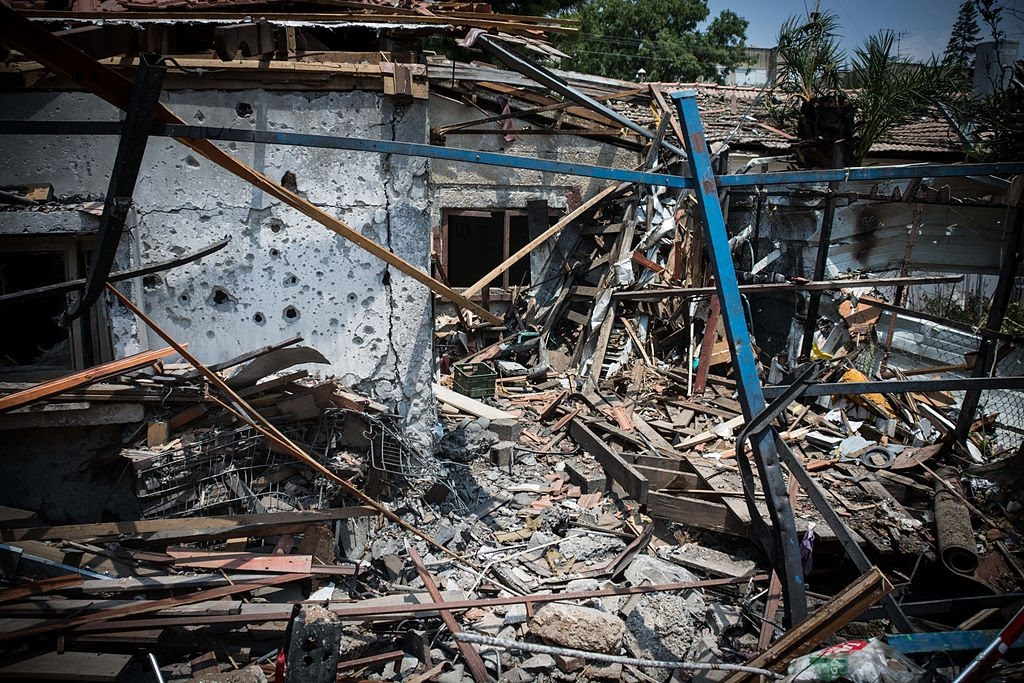 by Guy Millière
{ gatestoneinstitute.org } ~ On May 5 and 6, 700 rockets were fired from Gaza into Israeli territory in less than 48 hours. It was the most intensive rocket offensive on Israel to date... Four people were killed: three Israelis and one Palestinian Arab worker. One of the Israelis was hit in his car by an anti-tank missile. The Israeli military retaliated and resumed targeted killings. One was to a Hamas member, Hamed al-Khoudary, considered responsible for the transfer of Iranian funds to the armed factions in Gaza. On May 6, a spokesman from Islamic Jihad and Hamas  announced a ceasefire and said they had got "what they wanted". Israeli Prime Minister Benjamin Netanyahu issued a short statement: "We struck a powerful blow against Hamas and Islamic Jihad. The campaign is not finished, and it will require patience and careful judgment. We're prepared for its continuation". Various Israeli politicians, including members of the parties negotiating to be in the new governing coalition Netanyahu is building, said that the reprisals had been insufficient. "The ceasefire, in the circumstances it was reached under, has no gains for Israel", noted Likud MK Gideon Saar. "The time between each round of violent attacks against Israel and its citizens is shrinking, and terror organizations in Gaza are strengthening. The fighting hasn't been ended, just pushed off." Television interviews broadcast by the Israeli news channels show that the population of the south of the country is upset and would apparently like more drastic action. The Israeli left accused Netanyahu of sparing Hamas in order to keep Palestinians divided, weaken the Palestinian Authority (PA) and prevent the resumption of talks that could lead to the creation of a "Palestinian state". Yoram Yuval, a professor at the University of Haifa, wrote in the daily Yedioth Aharonoth  that Netanyahu was keen to continue, "claiming that there is no one on the Palestinian side to talk to, thereby avoiding any peace arrangement that would require the return of territories and the evacuation of settlements"...
https://www.gatestoneinstitute.org/14247/hamas-islamic-jihad-terrorist-organizations
.
Hawley to Propose ‘Do Not Call’
List for Internet Tracking 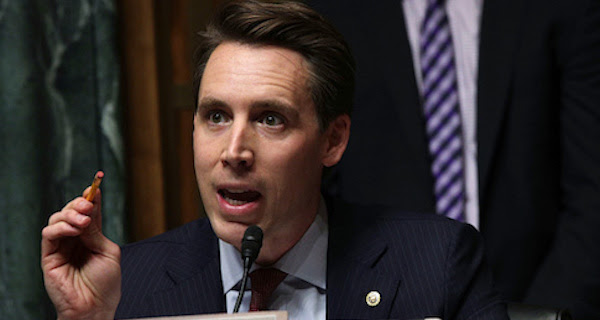 by Brent Scher
{ freebeacon.com } ~ A new bill from Sen. Josh Hawley (R., Mo.) would give Americans the ability to easily block internet companies such as Google and Facebook from collecting any data beyond what is necessary... for the specific online services offered. Hawley, who has focused a considerable amount of attention on data collection in his first months as a lawmaker, wants to give individuals the ability to join a "Do Not Track" list with a single click in their browser’s settings. He says companies have gotten "incredibly rich" off collecting data from individuals who haven't consented. "Big tech companies collect incredible amounts of deeply personal, private data from people without giving them the option to meaningfully consent," Hawley said. "They have gotten incredibly rich by employing creepy surveillance tactics on their users, but too often the extent of this data extraction is only known after a tech company irresponsibly handles the data and leaks it all over the internet," he said. "The American people didn't sign up for this, so I'm introducing this legislation to finally give them control over their personal information online."Hawley's office says existing options given by companies to individuals who don't want to be tracked have proven inadequate. It points to Google's admission to Hawley that it tracks a user's location throughout the day even when "location history" is off, and to Facebook admitting it collects data on people who don't even have an account as reasons why additional safeguards are necessary. It compares the proposed list to the existing "Do Not Call" list, which blocks companies from making marketing calls to members. It would prohibit companies from using data to profile anyone who activates the Do Not Track option and impose "strict penalties" on any company caught violating the terms. The bill would also force them to disclose the option to users and ban them from discriminating against users who choose not to be tracked...
https://freebeacon.com/issues/hawley-to-propose-do-not-call-list-for-internet-tracking/?utm_source=Freedom+Mail&utm_campaign=eb54faa087-EMAIL_CAMPAIGN_2019_05_20_09_04_COPY_01&utm_medium=email&utm_term=0_b5e6e0e9ea-eb54faa087-45611665
.
scumbag-Comey Was a Commie? 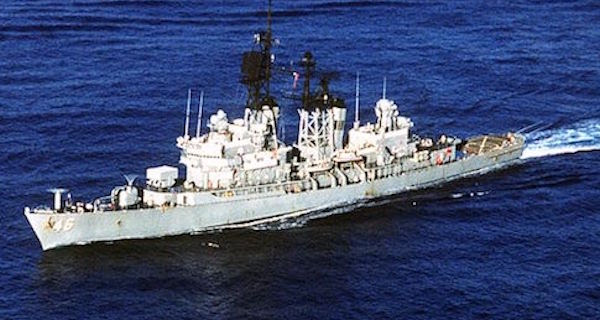 by Bill Gertz
{ freebeacon.com } ~ For the second time this month, a Navy warship conducted a freedom of navigation operation in the South China Sea designed to push back against expansive Chinese maritime claims to the waterway... The guided-missile destroyer USS Preble sailed within 12 nautical miles of the disputed Scarborough Reef on Monday, said Lt. Cmdr. Tim Gorman, spokesman for the U.S. Pacific Fleet. China denounced the latest action and said its military forces were dispatched to identify the ship and warn the destroyer to leave the area. Gorman said the Preble's passage was designed "to challenge excessive maritime claims and preserve access to the waterways as governed by international law." "U.S. Forces operate in the Indo-Pacific region on a daily basis, including in the South China Sea," Gorman said in a statement. "All operations are designed in accordance with international law and demonstrate that the United States will fly, sail and operate wherever international law allows. That is true in the South China Sea as in other places around the globe." The spokesman said such freedom of navigation operations "are not about any one country, nor are they about making political statements." However, the latest ship passage appears to be part of stepped-up military operations designed to counter China's expansive and illegal claims to own disputed islands throughout the sea...   https://freebeacon.com/national-security/navy-again-sends-warship-to-disputed-s-china-sea/?utm_source=Freedom+Mail&utm_campaign=eb54faa087-EMAIL_CAMPAIGN_2019_05_20_09_04_COPY_01&utm_medium=email&utm_term=0_b5e6e0e9ea-eb54faa087-45611665
.

.
The 'More Equal Than Others' Act

Nate Jackson:  House Democrats passed their so-called “Equality Act” today by a vote of 236-to-173 — eight Republicans inexplicably succumbed to the Demo siren song. Speaker Nancy Pulosi claims it will bring America “closer to equal liberty and justice for all,” but the truth is just the opposite. As Mark Alexander wrote last week, “This Orwellian legislation dictates that our individual and corporate views must comport with those of the Left, under penalty of law.” In fact, he adds, “This is not about equality, and all is most certainly not equal.”

House Minority Leader Kevin McCarthy also decried the bill, saying, “The Democrats’ latest piece of legislation is another mirage, packaged with a deceiving title, that ultimately chips away at our religious freedoms, would jeopardize Title IX sports programs, and puts our children at risk by eliminating parental consent in life-altering medical procedures.”

What does the Equality Act do? It updates the 1964 Civil Rights Act to include “sexual orientation” and “gender identity” to the list of protected characteristics. But McCarthy is exactly right about its effects.

Religious liberty would suffer greatly. The Heritage Foundation’s Ryan Anderson lists several ways this would happen. For example, “The Equality Act would force employers to pay for sex ‘reassignment’ procedures in their health insurance plans, and require medical professionals to perform them.” That goes for the military, too. Anderson adds that it would “force all schools and businesses to open their women’s bathrooms, locker rooms, showers, and sports teams to boys who ‘identify as’ girls and to men who ‘identify as’ women.” Faith-based adoption agencies would be forced to place children in homes they deem unfit. The alternative will be to shut down entirely.

As for women’s sports programs, they’re already in jeopardy because of the participation of biological males. And we’ve documented numerous tragic cases of child abuse over supposed gender dysphoria. Instead of getting help, these children are being subjected to life-altering hormone manipulation and even physical mutilation — and then given “reality” TV shows, to boot. The Equality Act could end up taking away the rights of parents who want to stop this insanity. Think that won’t happen? Look to Canada.

On a final note, amidst the nationwide fight over state abortion laws, the Equality Act would aim to trump them all. It does this by adding “pregnancy, childbirth, or a related medical condition” to the aforementioned list of protected characteristics. Thus, the Family Research Council’s Tony Perkins warns, “The Equality Act doesn’t just torch religious freedom and the First Amendment, it guts every pro-life protection ever passed into law.”

The good news is that the Equality Act won’t get a vote in the Senate and President Donald Trump has indicated he would veto it in any case. The bad news is that Democrats will campaign on it for years to come in their ongoing bid to dupe more women voters with appeals to emotion.