by Jerry McCormick
{patriotnewsalerts.com} ~ Fox News is apparently turning to the dark side. Farrell and his organization have gone to great lengths to expose political corruption... In doing so, Farrell has established some rather significant contacts throughout the world. Apparently, some of those contacts are members of the Guatemalan government. While appearing with Lou Dobbs, Farrell claimed that there has been “criminal involvement on the part of these leftist mobs” in regard to the migrant caravan headed for the U.S. southern border. He further stated: “It’s a highly organized, very elaborate sophisticated operation. I have that from the highest levels of the Guatemalan government. Farrell also stated that some of the people involved in the organization of the caravan “are getting money from the scumbag-Soros-occupied State Department.” While Farrell clearly does not work for Fox News, his appearances on the network are great for promoting Judicial Watch. The fact that Fox News executives were so upset over his comments is indeed disturbing. They are, in essence, trying to silence one of the largest and most respected political watchdogs in existence...  https://www.patriotnewsalerts.com/fox-business-drops-judicial/?utm_source=boomtrain&utm_medium=manual&utm_campaign=pna1&utm_source=boomtrain&utm_medium=manual&utm_campaign=pna1
VIDEO:  https://twitter.com/joshtpm/status/1056324117329297409?ref_src=twsrc%5Etfw%7Ctwcamp%5Etweetembed%7Ctwterm%5E1056324117329297409&ref_url=https%3A%2F%2Fwww.patriotnewsalerts.com%2Ffox-business-drops-judicial%2F
.
Lindsey Graham Does It Again: Crowd Explodes When
He Tells Leftists, “You Can Kiss My A–” 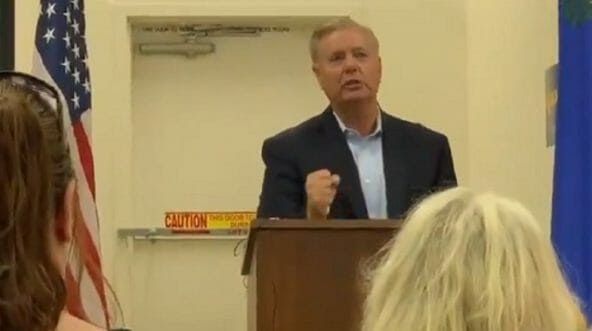 by CILLIAN ZEAL
{westernjournal.com} ~ Lindsey Graham 2.0 may be the greatest upgrade since Windows 95. The first version of the South Carolina Republican senator... which was out so long that we figured software support had ended — was a rather buggy app indeed. It wasn’t particularly useful to Republicans — the audience it was being pitched at — but it seemed to help dummycrats-Democrats by giving an example of the type of lukewarm RINO they’ll vaguely tolerate. Version 2.0 has been an entirely different animal, however. Witness its deployment during the Kavanaugh hearings, where it managed to delete opposition in record time, all the while generating great quotes each and every day. Well, if you were fearing that Graham might downgrade himself to version 1.x, you needn’t worry. Graham has kept on being conservative woke, giving us one awesome soundbite after another. For example, take his speech at a Get Out the Vote event on Friday in which he savaged radical liberals. Graham was in Las Vegas, where he was campaigning for GOP Sen. Dean Heller of Nevada. Heller is in a tight race with dummycrats-Democrat Rep. Jacky Rosen in an election that the dummycrats-Democrats likely need to win if they’re to regain control of the upper chamber...
https://www.westernjournal.com/ct/lindsey-graham-crowd-explodes-tells-leftists-can-kiss/?utm_source=Email&utm_medium=usjf&utm_campaign=dailyam&utm_content=usjf
VIDEO:  https://twitter.com/hollandcourtney/status/1056083616197828608?ref_src=twsrc%5Etfw%7Ctwcamp%5Etweetembed%7Ctwterm%5E1056083616197828608&ref_url=https%3A%2F%2Fwww.westernjournal.com%2Fct%2Flindsey-graham-crowd-explodes-tells-leftists-can-kiss%2F
.
DeSantis: Andrew Gillum Will Turn Florida into
a Petri Dish for scumbag-Soros 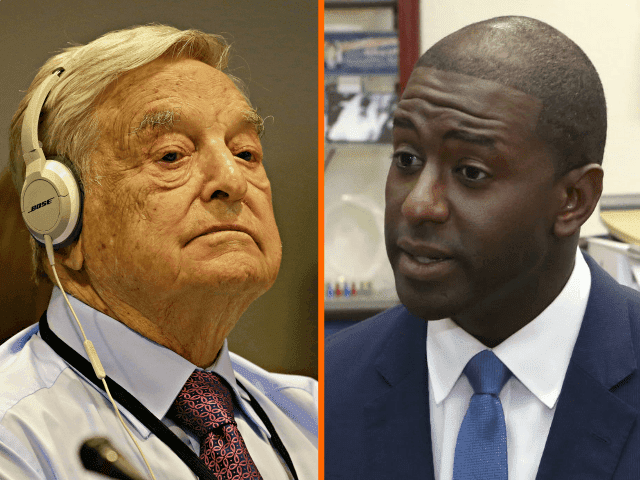 by Aaron Klein
{breitbart.com} ~ Florida gubernatorial candidate Ron DeSantis is warning that if dummycrats-Democratic opponent Andrew Gillum is victorious... then his state will “become a petri dish for people like scumbsag-George Soros and Tom Steyer,” referring to the activist billionaires. “And I think that that will have a really negative effect,” continued DeSantis, speaking to Breitbart News in an exclusive interview. “socialist-Gillum is in the pocket of people like Tom Steyer and  scumbsag-George Soros. So if he is able to win in a state like Florida I think you are going to see a conflagration across the country of these hard left candidates emerging and they can do a lot of damage if they could get into office.”DeSantis was responding to a question about the national importance of his race beyond the ramifications for Florida...
https://www.breitbart.com/midterm-election/2018/10/29/exclusive-ron-desantis-andrew-gillum-will-turn-florida-into-a-petri-dish-for-george-soros/
.
Second migrant caravan defies heavy
police presence, enters Mexico 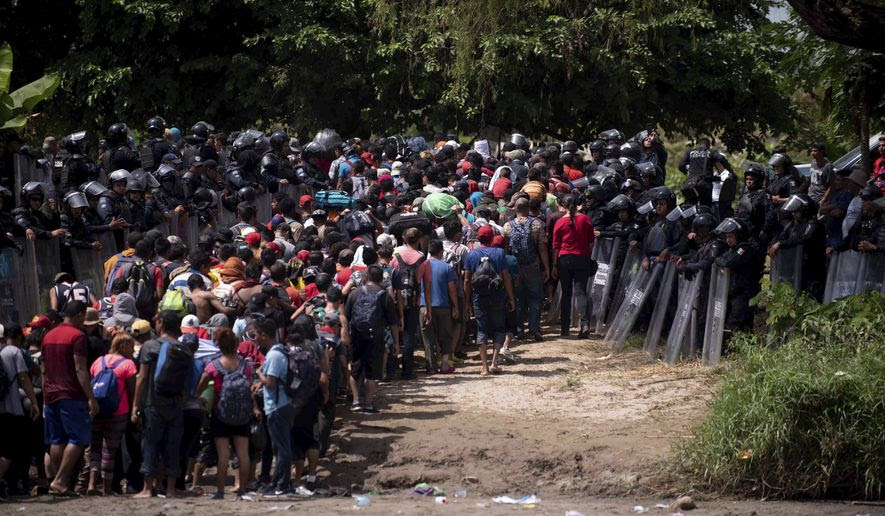 by Santiago Billy and Christopher Sherman
{washingtontimes.com} ~ Hundreds of Central Americans following in the footsteps of a thousands-strong migrant caravan making its way toward the U.S. border... crossed a river from Guatemala into Mexico on Monday, defying a heavy Federal Police presence deployed to patrol that country’s southern frontier. A low-flying police helicopter hovered overhead as the migrants waded in large groups through the Suchiate River’s murky waters, apparently trying to use the downdraft from its rotors to discourage them. Guatemala’s Noti7 channel reported that one man drowned and aired video of a man dragging a seemingly lifeless body from the river. Once on the Mexican side the migrants were surrounded and escorted by dark-uniformed officers as sirens wailed. The standoff at the riverbank followed a more violent confrontation that occurred on the bridge over the river Sunday night, when migrants threw rocks and used sticks against Mexico police. One migrant died from a head wound during the clash, but the cause was unclear. Hundreds of miles up the road in southern Mexico, the first caravan of some 4,000 migrants resumed its advance, still at least 1,000 miles or farther from their goal of reaching the United States as the Pentagon announced it would send 5,200 active-duty troops to “harden” the U.S.-Mexico border. There are already more than 2,000 National Guard troops providing assistance at the border...
https://www.washingtontimes.com/news/2018/oct/29/second-migrant-caravan-enters-mexico-despite-heavy/?utm_source=Boomtrain&utm_medium=manual&utm_campaign=20180326&utm_term=newsalert&utm_content=newsalert&bt_ee=eSzGHypJCh%2Fi2rw1VDxb4hnJ47qEo3BZYZ8MLMsBIGYNeDRkNcESVsAtPYMd21J0&bt_ts=1540860299389
.
Whitey Bulger, infamous Boston mob boss, killed i
n prison, multiple reports say 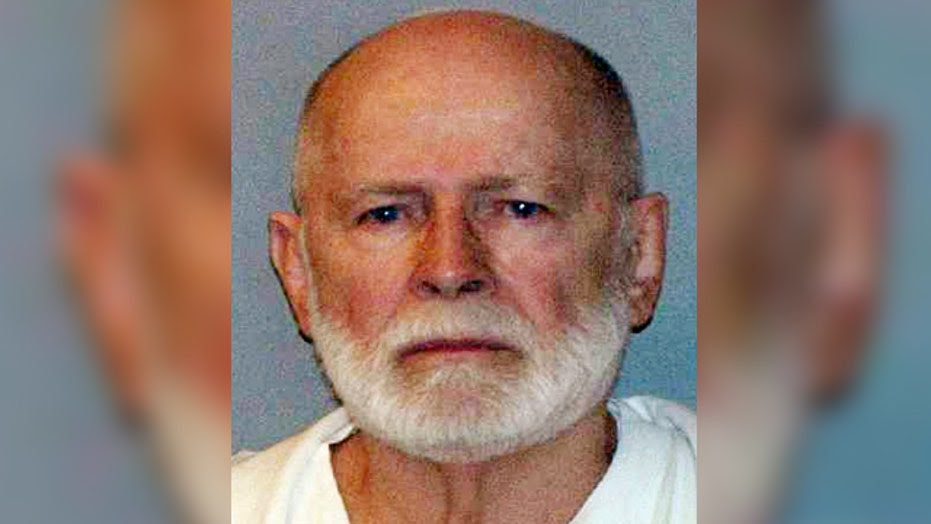 by Ryan Gaydos
{foxnews.com} ~ Infamous Boston mob boss James "Whitey" Bulger – who was a fugitive for 16 years, was sentenced to life in prison in 2013... and was portrayed in film by Johnny Depp – was killed at a West Virginia prison on Tuesday, the day he arrived at the facility, multiple reports say. He was 89. Bulger was killed at a West Virginia prison, according to the Boston Globe. He was transferred to USP Hazelton on Tuesday morning in Bruceton Mills. He was recently moved from a prison in Florida and had a stop in Oklahoma City before arriving in West Virginia. A union official for correctional officers at the high-security prison told WV News there was a homicide at the facility, but couldn’t say whether it was Bulger. Hank Brennan, Bulger’s attorney, told BuzzFeed News, he couldn’t “confirm or deny it at this point.” Bureau of Prisons officials and Bulger's attorney declined last week to comment on why he was being moved. A person familiar with his move told the Boston Globe that Bulger’s health was deteriorating. Bulger was convicted of racketeering, and other crimes, including extortion, conspiracy, money-laundering and drug dealing in August 2013. The jury believed he took part in 11 of 19 killings...
https://www.foxnews.com/us/whitey-bulger-infamous-boston-mob-boss-killed-in-prison
VIDEO:  https://video.foxnews.com/v/4377436815001/
.

by Thomas Gallatin:  The oldest justice on the Supreme Court has made a habit of publicly airing her political opinions, and Ruth Bader Ginsburg is at it again. Alluding to the recent partisan fight in the Senate to confirm Justice Brett Kavanaugh, Ginsburg lamented the polarization of the judicial confirmation process, assigning the blame to Congress. “To me,” she said, “the obvious culprit is Congress.” Well, as the saying goes, when you point one finger at others, there are three pointing back at you. Or, as Jesus said, “You hypocrite! First pull the log out of your own eye, and then you will see clearly to remove the speck out of your brother’s eye.” (Matt 7:5)

It’s true that the Senate bears much responsibility for the partisan circus that is judicial nominations. But Ginsburg misses two huge points. For one thing, it was dummycrats-Democrats in the 1987 Robert Bork hearings who so outrageously character assassinated Bork that his last name became a verb to describe such vicious personal attacks. In 1992, Clarence Thomas suffered what he called a “high-tech lynching.” dummycrats-Democrats merely continued that “heritage” with their vile assault on Kavanaugh.
But the primary reason the judicial confirmation process has become such a polarizing issue is because of activist judges on the courts. Activist judges — like Ginsburg — are the very judicial despots Thomas Jefferson warned about. They see their role as a means to further their own political agenda rather than to be informed by and limited in their judgements to the text of Constitution and the law. In other words, Ginsburg assigns blame solely to Congress, which by constitutional design is to be the most partisan branch of government, while ignoring her own outsized role in helping to foster an increasingly politicized Supreme Court.
Even at the advanced age of 85, Ginsburg has yet to learn the wisdom of when to be silent. By expressing her political opinions in both public comments and rulings, she has done more to cause Americans to question the nature of the Supreme Court’s supposedly apolitical standard than the words of President Donald Trump or any member of Congress ever will.