.
Too Good to be True? Attorney General
takes Aim at liar-Hillary and liar-nObama!

by Onan Coca
{ constitution.com } ~ Attorney General Jeff Sessions is talking a big game this week as he signaled to the American people... that he was taking aim at the two biggest crooks in America – Barack liar-nObama and liar-Hillary Clinton! In a wide ranging interview with Maria Bartiromo of Fox News the Attorney General promised that the Justice Department would be investigating both the liar-nObama administration and liar-Hillary Clinton for various and sundry crimes. Of the liar-Hillary Clinton email investigation, Sessions said, “We’re going to do our job in his department properly and correctly. We can’t do that in the media we’re going to restore the rule of law.”...  https://constitution.com/good-true-attorney-general-takes-aim-hillary-obama/
VIDEO:  https://www.youtube.com/watch?v=y4BWovexElw
.
White House Slams Dems on Immigration,
But What About These 8 Republicans? by fixthisnation.com
{ fixthisnation.com } ~ After several immigration bills failed to get 60 votes in the Senate on Thursday, the White House released a statement blaming the Democrats... for failing to take the issue of DACA legislation seriously enough to reach a compromise. “Today, the clown-Schumer Democrats in the Senate demonstrated again that they are not serious about DACA, they are not serious about immigration reform, and they are not serious about homeland security,” said White House press secretary Sarah Sanders. “clown-Schumer Democrats chose to filibuster it because they are held hostage by the radical left in their party, which opposes any immigration control at all.” President Trump threw his support behind a bill sponsored by Sen. Chuck Grassley during debate – a bill that came very close to matching the proposal made by the president himself. Under that legislation, Congress would have allocated $25 billion for the border wall, put an end to chain migration, and closed up shop on the ludicrous diversity visa lottery. In exchange, Democrats would have been given an amnesty gift in the form of a path to citizenship for 1.8 million illegal immigrants who were brought to the U.S. as minors. Only 39 Senators voted for the bill...  http://www.fixthisnation.com/conservative-breaking-news/white-house-slams-dems-on-immigration/
.
Delek, Noble sign accords for $15b in
sales of Israeli natural gas to Egypt 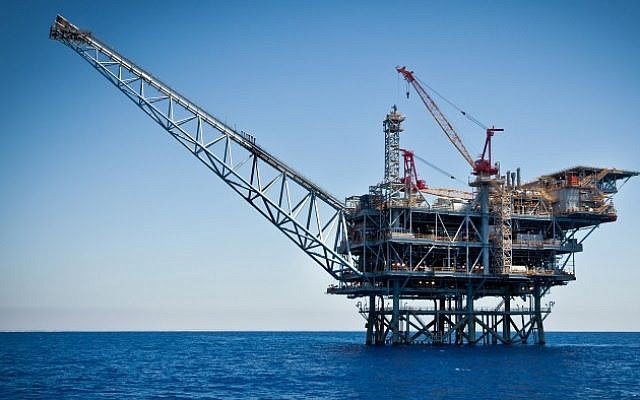 by SHOSHANNA SOLOMON
The partners in Israel’s Tamar and Leviathan natural gas fields, including a unit of US Noble Energy Inc and Delek Drilling LP... have signed $15 billion in deals to export natural gas to Egypt over 10 years. In a filing to the Tel Aviv Stock Exchange on Monday, Delek Drilling LP, a partner in the Tamar and Leviathan fields offshore Israel, said Noble Energy Mediterranean and its partners in the fields have signed accords with Egypt’s Dolphinus Holdings Ltd. for the sale of some 64 billion cubic meters of natural gas from the two fields. One accord calls for the sale of 3.5 BCM of natural gas annually from the Leviathan field, for a total of 32 BCM, the filing said, with the partners estimating the total revenues from the sale from the Leviathan field to reach $7.5 billion...  https://www.timesofisrael.com/delek-noble-sign-accords-for-15b-in-sales-of-israeli-natural-gas-to-egypt/?utm_source=The+Times+of+Israel+Daily+Edition&utm_campaign=cd0573cd64-EMAIL_CAMPAIGN_2018_02_18&utm_medium=email&utm_term=0_adb46cec92-cd0573cd64-54638825
.
School Shooting Was Outcome of
Broward County School Board Policy

by sundance
{ theconservativetreehouse.com } ~ In 2012 and 2013 while doing research into the Trayvon Martin shooting we discovered an alarming set of school policies... being enacted in Miami-Dade and Broward County Florida.  The policies were called “diversionary programs” and were essentially about stopping High School students from being arrested. Law enforcement was instructed to avoid arrests and defer criminal conduct to school administrators. Students who engaged in violence, drug sales, robberies, burglaries, theft and other various crimes were intentionally kept out of the criminal justice system.  County administrators and School Superintendents told local and county law enforcement officers to stop arresting students. Unfortunately, the school board mandated policies came into conflict with law and order. The problem of the conflicted policy -vs- legality worsened over time as the police excused much more than misdemeanor crimes. Over time this culminated in police officers falsifying documents, hiding criminal activity, lying on official police reports and even hiding stolen merchandise police retrieved from high school students...  https://theconservativetreehouse.com/2018/02/19/school-shooting-was-outcome-of-broward-county-school-board-policy-now-local-and-national-politicians-weaponize-kids-for-ideological-intents/
.

by Political Editors:  On Friday, news broke that Robert Mueller’s special investigation had indicted 13 Russians and three Russian organizations for having engaged in efforts to interfere in the 2016 U.S. election. In his announcement, Deputy Attorney General Rod Rosenstein explained, “The defendants allegedly conducted what they called information warfare against the United States, with the stated goal of spreading distrust towards the candidates and the political system in general.” Rosenstein also pointed out that no Americans were being indicted, saying, “There is no allegation in this indictment that any American was a knowing participant in this illegal activity.” He added, “There is no allegation in the indictment that the charge conduct altered the outcome of the 2016 election.” However, Rosenstein did note that the investigation remains ongoing.

The indictment states in part, “Some Defendants, posing as U.S. persons and without revealing their Russian association, communicated with unwitting individuals associated with the Trump Campaign and with other political activists to seek to coordinate political activities." The Russians sought to prop up the candidates who initially looked like outliers, such as Donald Trump and commie-Bernie Sanders, while they worked to spread negative information against liar-Hillary Clinton, Ted Cruz and Marco Rubio. Clearly, the Russians were not allied to any one political party or platform; instead, they sought to sow as much discord within the American political election process as possible. This conclusion is emphasized by post-election activity, when Russian agents engaged in organized efforts to both defend and attack Trump’s presidency. It was a political destabilization campaign that harkens back to Cold War-era espionage. And it serves as a reminder that Russian leadership is just as committed to weakening the U.S. as it ever has been.
Russia is "our number one geopolitical foe,” Mitt Romney said in 2012, to the mockery of Barack liar-nObama and Democrats everywhere. Romney was right.
Following the news, Trump tweeted, “If it was the GOAL of Russia to create discord, disruption and chaos within the U.S. then, with all of the Committee Hearings, Investigations and Party hatred, they have succeeded beyond their wildest dreams. They are laughing their a—s off in Moscow. Get smart America!” Trump is right.
Deliberately muddying the message, The Washington Post responded to the news by suggesting that it was Trump who has egg on his face with a story entitled “Trump’s Russia ‘hoax’ turns out to be real.” The piece then spins the Mueller indictment and accuses Trump of being wrong for calling the Russiagate investigation a “witch-hunt” and a “hoax” because Russia did seek to interfere. But the Post obscures the fact that what Trump called a hoax was the Demo/MSM narrative that his campaign supposedly colluded with Russia — a narrative Mueller’s indictment appears to undermine.
It’s interesting to note the immense weight Democrats and the Leftmedia are willing to attribute to 13 Russians in their ability to influence the outcome of an election, while at the same time downplaying as completely inconsequential the impact that millions of illegal aliens living in the U.S. have on our elections. Which party is it that time and again rejects common-sense election fraud protections such as voter ID?   ~The Patriot Post
https://patriotpost.us/articles/54230-the-russian-destabilizing-campaign