TheFrontPageCover
~ Featuring ~
Behind the Glare of Impeachment,
Secretary DeVos Shines 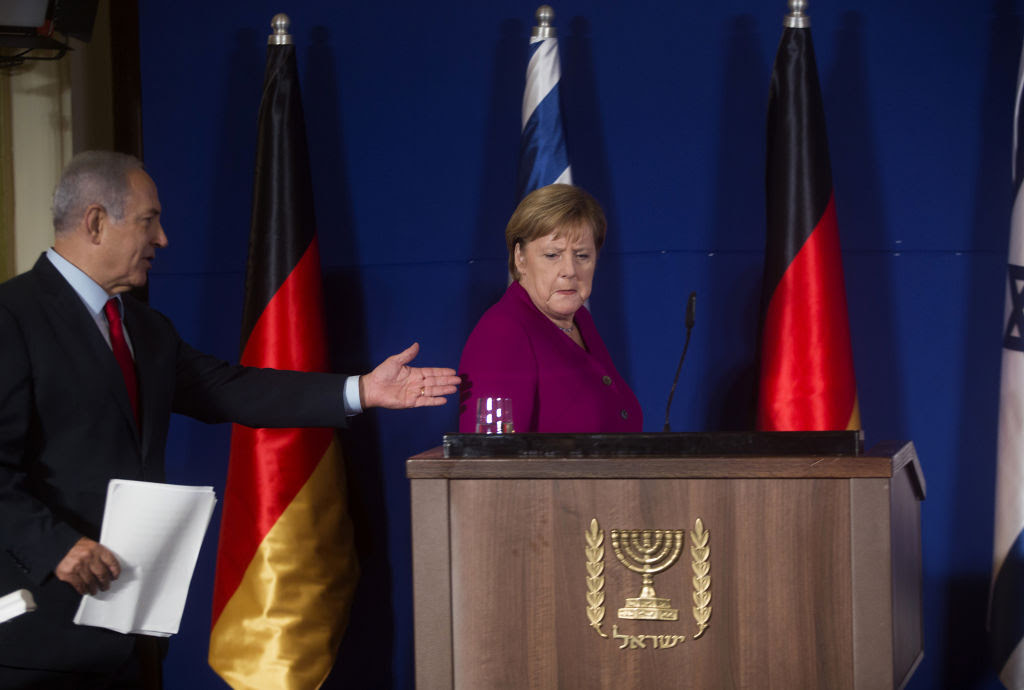 by Alain Destexhe
{ gatestoneinstitute.org } ~ The European Union has, over the years, become increasingly hostile towards Israel. That attitude was confirmed in early November... when the Court of Justice of the European Union ruled that food products made in the so-called settlements of East Jerusalem, the West Bank and the Golan Heights must be labeled as such and may not carry the generic label "Made in Israel." As rightly argued by the strategic studies expert Soeren Kern, there are many territorial conflicts all over the world, but the European Court singles out only Israel. Examples of the EU's bias against Israel are numerous, particularly compared to the United States. The EU seems deliberately not to recognize that Israel, a sovereign state, is regularly under threat -- even extreme continuous rocket fire from Gaza and Syria -- and, for that reason alone deserves its full support. No country in the world, especially one roughly the size of Vancouver Island, undergoes military attacks as perpetually as Israel does. On November 12 and 13, in under 48 hours, more than 450 rockets and mortars were fired from the Gaza Strip at Israeli towns. Rockets fired from Gaza caused countless damage, injuring at least 63 persons, and reached as far as the Tel Aviv area. Four hundred and fifty rockets in under 48 hours is not a skirmish or a minor attack; it is a large-scale military attack. Any similar attack on France or Germany -- if they received even a single missile -- would have sparked a major crisis. The official EU response was, to say the least, underwhelming: "This morning, Israel conducted an operation inside Gaza targeting a senior leader of the Palestinian Islamic Jihad. In response, rockets were fired from Gaza on southern and central Israel. The firing of rockets on civilian populations is totally unacceptable and must immediately stop. A rapid and complete de-escalation is now necessary to safeguard the lives and security of Palestinian and Israeli civilians. As the EU has consistently reiterated, only a political solution can put an end to these continuing cycles of violence".The statement is revealing for many reasons. It fails to mention that Israel had killed a terrorist belonging to an extremist group about to launch another attack. The statement also fails to mention the number of rockets fired on the country, or the right of Israel to defend itself. There are no words about the consequences for the civilian population of Israel. There is no mention of who launched the rockets, or who is fueling this supposed "continuing cycle of violence", and there is no empathy whatsoever for the bombarded people of Israel...
https://www.gatestoneinstitute.org/15264/europe-hostility-israel
.
IG Report – Continued, Specific,
FISA Date Redactions

by sundance
{ theconservativetreehouse.com } ~ Amid the predictive discussions by those who have followed the three-year background of the potential DOJ & FBI FISA issues, there was one very specific aspect CTH was looking for... Would the IG report redact the dates of the Carter Page FISA application and renewals? We got that answer today, and that answer, unfortunately, is yes: Ask yourself what is the national security value in hiding those dates? Why does the DOJ need to hide them?  Unfortunately the answer highlights an institutional decision. On its face the dates seem like an overly granular question; perhaps even a small detail that few would notice.  However, for CTH readers that little detail exposes so much. In 2018 Main Justice made a very specific decision, a very specific lie, that once told would forever set them on a path – from which there is no return. It was during a time between July and December 2018 that CTH realized the DOJ had handcuffed themselves to a cover story; and that cover story foretold future conduct. When Senate Intelligence Committee Vice-Chairman Mark Warner requested a copy of the FISA application back in early spring 2017, the Jeff Sessions’ DOJ produced a copy for review, date stamped by the FISC on March 17th, 2017. That copy was seeded with a false date of origination. The reason for the false date was the FBI leak taskforce initiated by Sessions. The false date was a leak trap. Investigators provided the FISA application to SSCI Vice-Chairman Warner with a false date and then they looked to see if media reports of that FISA application would surface. If reports started surfacing, any report that used the false date would be attributable to the application given to the SSCI. The source of the leak would be identified. That’s exactly what happened...  https://theconservativetreehouse.com/2019/12/09/ig-report-continued-specific-fisa-date-redactions/
.
Lindsey Graham Press Conference – Three Key
FISA Moments Highlight Gross FBI Misconduct

by sundance
{ theconservativetreehouse.com } ~ Earlier this afternoon Senate Judiciary Committee Lindsey Graham held a press availability to discuss concerns with the Inspector General report... Senator Graham outlines three key FBI moments for him within the IG report, that highlight demonstrable and intentional misconduct... January 2017 the FBI contacted the Steele Dossier sub-source and was informed the dossier was remarkably unreliable, out of context, and full of “bar talk”...January 2017 the FBI lied. Telling the FISA Court the sub-source validated the dossier as evidence in order to get a renewal; a claim they repeated in April...June 2017 the CIA told FBI Lawyer Kevin Clinesmith that Carter Page was working for them; and then Clinesmith changed that notification so he could submit the last renewal.   https://theconservativetreehouse.com/2019/12/09/lindsey-graham-press-conference-three-key-fisa-moments-highlight-gross-fbi-misconduct/
VIDEO:  https://www.youtube.com/watch?v=l-aUws90xyo&feature=emb_title
.
Judiciary Hearing Devolves As Democrats
Reuse Their Witness To Question
Other Witnesses

by AMBER ATHEY
{ dailycaller.com } ~ The House Judiciary Committee’s second impeachment hearing got testy Monday when Democrats allowed a lawyer who had already served as a witness... to return to the bench and cross-examine other witnesses. Lawyer Barry Berke, who was selected to be the Judiciary Democrats’ counsel, started the hearing by presenting his opinion as a witness as to why President Donald Trump should be impeached. After serving as a witness, Berke was then assigned to question and cross-examine other witnesses at the hearing. As Berke started questioning  the Republican counsel, Steve Castor, Republican Texas Rep. Louie Gohmert interrupted to clarify if a witness could also serve as a questioner under House rules. Judiciary Chairman scumbag liar-Jerry Nadler refused to acknowledge Gohmert’s point of order. “There is no rule or precedent for anybody being a witness and then getting to come up and question, so — the point of order is he’s inappropriate to be up here asking questions,” Gohmert asked.  “How much money do you have to give to get to do that?” Gohmert added, presumably referencing the fact that Berke has donated over $100,000 to Democrats. scumbag liar-Nadler responded by urging Gohmert not to “cast aspersions” on members of the committee. Several journalists questioned the arrangement on Twitter, indicating that allowing someone to serve as both a witness and a questioner was unprecedented.  https://dailycaller.com/2019/12/09/judiciary-democrats-witness-berke-impeachment-gohmert/?utm_source=&utm_medium=email&utm_campaign=11221
VIDEO:  https://www.youtube.com/watch?v=NtAFeap22-k&feature=emb_title
.
Fox News Announces Bill Hemmer
Will Replace Shepard Smith

by thepoliticalinsider.com ~ Bill Hemmer currently anchors the network’s three-hour daytime block, “America’s Newsroom,” with Sandra Smith. He’s been a fixture at the network since 2005... The 3 p.m. weekday hour will now be branded “Bill Hemmer Reports” beginning January 20, according to the statement. Said Hemmer in a statement, “As a journalist, I am extremely grateful for this opportunity. Leading our breaking news division with a signature hour has enormous value to me, personally, and to our audience. We’ve got a fantastic team here and I am excited to get to work.”
https://thepoliticalinsider.com/shepard-smiths-replacement-at-fox-news-is-named/?utm_campaign=TPI12092019afternoon&utm_source=criticalimpact&utm_medium=email&utm_content=4b4ea4948726422aa6473c7b9fa19141&source=TPICI
.

.
Behind the Glare of Impeachment,
Secretary DeVos Shines

Removing Donald Trump from office before he can get re-elected is the only thing in Washington that Democrats and the national media really care about.

But while Thelma liar-Pelosi and Louise scumbag liar-Nadler speed down their constitutionally crooked backroad to impeachment, the Trump administration has been quietly tackling issues like education that are actually important for Americans.

Covered by the constant media glare of impeachment, for instance,Trump’s Secretary of Education Betsy DeVos is doing a great job of fixing our broken public education system.

She’s doing her best to get the federal government out of public education, where it never belonged.

Described on her department’s web site as “an unrelenting champion for America’s students, educators and taxpayers,” DeVos plans to do major structural things like combining the Department of Education and the Department of Labor and spinning off a new independent agency that would handle the federal government’s $1.5 trillion student-loan portfolio.

She already has a list of smaller accomplishments too long to detail.

She’s overhauled the management of her department, implemented a pro-taxpayer budget, cut staff by 10 per cent, transferred duties to other federal agencies, thrown out 29 major regulations and done her best to do what she promised she’d do from Day One — work herself out of a job.

She’s restoring local and state control of education by ending the failed Common Core program and implementing the Every Student Succeeds Act.

She’s expanded school choice opportunities in Washington, D.C. and rescinded Obama-era guidance on school discipline that tied the hands of teachers and principals.

DeVos has introduced Education Freedom Scholarships, which the department web site boasts is “the most transformative K-12 policy ever” and would provide families with up to $5 billion in scholarships to help them get the best education option possible.

Meanwhile, in higher education she’s also stuck up for free speech and religious freedom on campuses and drafted new regulations on sexual misconduct that protect survivors, hold schools accountable and ensure due process for alleged perpetrators.

It will take all of these large and small reforms, and many more, to fix our failing public schools, return genuine local control to our classrooms.

We have a long way to go to provide maximum school choice for parents — and the Democrats, unions and education industrial complex hate everything DeVos is doing.

But too bad for them.

Before Jimmy Carter invented the Department of Education in 1979, our public schools were the envy of the world. Today, 75 percent of our black and brown kids are unable to read or do math at grade level.

The federal bureaucracy in D.C. accounts for about only 9 percent of the $700 billion-plus that we spend each year on public education. But in 40 years it has managed to spend nearly a trillion bucks and done immense damage to our education system.

If I had young kids today, I wouldn’t put them in public education if all they took was recess.

I’d either homeschool them or send them to a good private school. Millions of parents would do the same if they had the choice or could afford it.

DeVos wants every kid in America to have the chance to get the same high-quality schooling hers had.

The best way to attain that goal is to get rid of the Department of Education, which is something my father said in 1979 he would do if he were elected in 1980.

Unfortunately, he was never able to fulfill that promise as president, and until Trump and DeVos came along to drain D.C.‘s swamps, Carter’s gift to the teachers unions survived and grew as it slowly ruined our public schools.

It’s not hard to see why Democrats would love to impeach DeVos, too.   ~The Patriot Post