by rickwells.us
{ rickwells.us } ~ Former secretary of state hanoi-John Kerry said on Sunday that the country has to move away from the constant efforts to “destroy” the presidency, no matter who the president is... “We have got to get away from this constant effort to destroy a presidency, whoever’s it is. It is tearing our country apart, and I think it is very, very dangerous for our democracy,” hanoi-Kerry said on CBS’s “Face the Nation.” hanoi-Kerry was talking about the potential threat that cyber attacks pose to the country and the growing problem of politicizing these threats. “This is an ongoing challenge to our country. It is not a dummycrayts-Democrat or Republican problem. It has been building for a long period of time under President Bush. Prior to that, ever since we have had an internet there have been escalating series of cyber attacks against corporations and against government entities,” hanoi-Kerry said. “And so this is a problem for all of us as Americans and we have got to depoliticize it.”...  https://rickwells.us/kerry-obama-russian-meddling/
VIDEO:  https://www.youtube.com/watch?v=q2tbHBtG8D4
.
Senator Rand Paul Discusses Effort to Remove
Security Clearances From Former Intelligence Officials 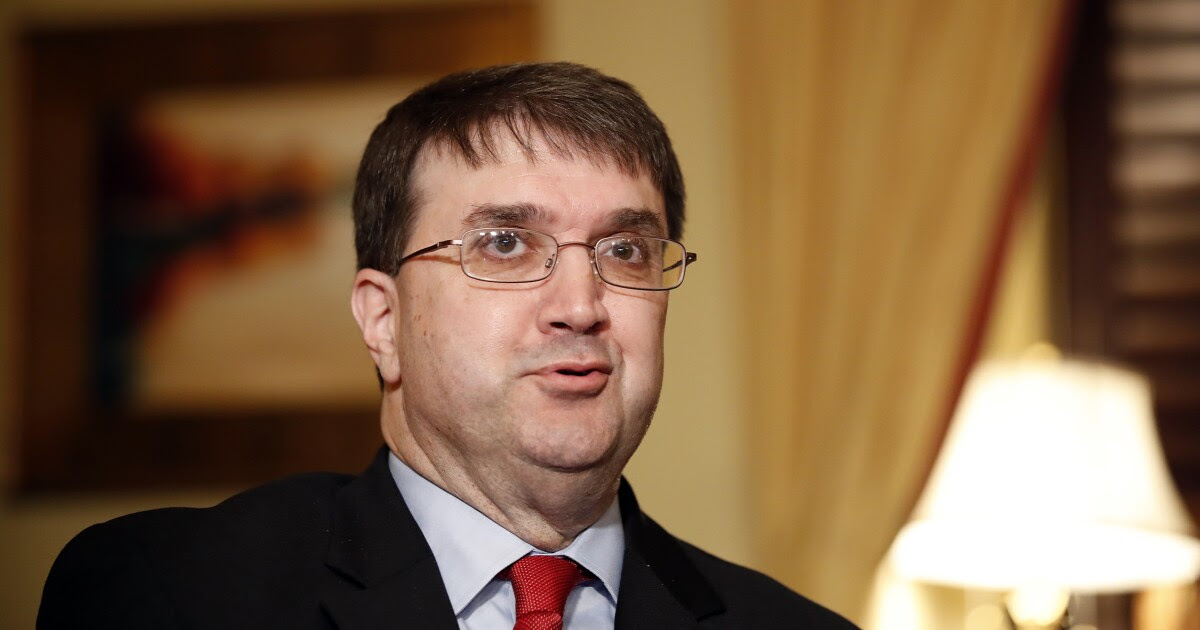 by Kimberly Leonard
{ washingtonexaminer.com } ~ Robert Wilkie has been confirmed as the next secretary to lead the Department of Veterans Affairs... becoming the first nominee for the job to face any opposing votes in the Senate. Wilkie was confirmed by an 86-9 vote. Sen. commie-Bernie Sanders, I-Vt., voted against Wilkie, saying that he believed the Trump administration would seek to "privatize" the VA, a move he and dummycrats-Democrats oppose. commie-Sanders was joined in his opposition by eight dummycrats-Democratic senators, including Sens. Kirsten Gillibrand and scumbag-Cory Booker of New York, Sens. Kamala Harris and Diane Fein-stein of California, Elizabeth dinky-Warren and Ed Markey of Massachusetts, and Jeff Merkley and scumbag-Ron Wyden of Oregon. This is the first time in the 30-year history of the post that senators have voted against a president's nominee...
https://www.washingtonexaminer.com/policy/healthcare/senate-confirms-robert-wilkie-trumps-pick-to-lead-the-va?utm_source=WEX_Breaking%20News%20Alert_07/23/2018&utm_medium=email&utm_campaign=WEX_Breaking%20News
.
Did the FBI Lie to the FISA Court?

by DANIEL J. FLYNN
{ spectator.org } ~ Consider the source. The FBI did not allow the Foreign Intelligence Surveillance Court to do just that... Instead, the heavily-redacted application for a warrant to surveil U.S. citizen Carter Page obscures the source. It never says, at least in the unredacted portions, that the liar-Hillary Clinton campaign and the dummycrats-Democratic National Committee paid operatives to dig dirt on Donald Trump. This allows the warrant to talk of “research” and not “opposition research.” The warrant application shields the partisan origins of the “dossier” and talks of a “law firm” hiring the investigators. In reality, liar-Hillary Clinton’s campaign and the dummycrats-DNC paid the law firm, which paid Fusion GPS, which paid Christopher Steele and, given the reference to a “U.S. person” in the warrant, perhaps others — unless that “U.S. person” was, in fact, a U.K. person, which complicates the narrative of foreign interference to conduct opposition research. By using intermediaries to effectively launder dirty money clean, the liar-Clinton campaign kept its name off of a story it generated — and dodged the whole intent of campaign finance laws in the process. The FBI, not wanting to undermine its case to the FISA court, similarly omitted that the material it presented to the court came from a political operative paid by the opponent of “Candidate #1.” It now omits the name of the agent bringing the application forth to the court. Judging by what we know about the various FBI employees involved in the investigation, the agent’s identity may prove similarly damning. Why redact the investigating agent’s name and not the subject of his or her investigation?...   https://spectator.org/did-the-fbi-lie-to-the-fisa-court/?utm_source=American+Spectator+Emails&utm_campaign=dc2362a163-EMAIL_CAMPAIGN_2018_07_23_07_49&utm_medium=email&utm_term=0_797a38d487-dc2362a163-104608113
.
Here’s Proof the FBI Lied to Spy on President Trump

by Matt
{ thepoliticalinsider.com } ~ The FISA application that the FBI submitted to spy on President Donald Trump associate Carter Page has been released to the public... thanks to a Freedom of Information Act request, and it contains all the dirty details that the “Nunes Memo” said it would. As you’ll remember, Page was targeted by liar-nObama’s FBI, which submitted a FISA warrant to spy on Page in July 2016, which was then renewed three consecutive times. In total, Page was surveilled for about a year. While this was supposedly over concerns that Page was colluding with the Russians, that was just cover to get an “in” to spy on the Trump campaign. While filing a FISA in an attempt to spy directly on Trump himself would leave an obvious paper trail, surveilling Page is a way to launder that surveillance. Since the FBI will also indirectly surveil every single person Page speaks to because they’re listening to his phone conversations. Even CNN admitted in the case of the FBI’s spying on Paul Manafort, that “It’s unclear whether Trump himself was picked up on the surveillance.” Translation: Trump himself was picked up on the surveillance...
https://thepoliticalinsider.com/fbi-lied-trump-spying/?utm_medium=email&utm_source=criticalimpact&utm_campaign=TPI_breaking_newsletter2_7_23_2018&utm_content=4b4ea4948726422aa6473c7b9fa19141&source=CI
.
The Mueller Indictment

by Media Editors:   What’s going on with Robert Mueller’s latest indictment? Scott Ott has actually read it and it seems a bit underwhelming.
VIDEO:  https://www.youtube.com/watch?time_continue=3&v=ewx6OJbPnco
~The Patriot Post
https://patriotpost.us/articles/57255?mailing_id=3645&utm_medium=email&utm_source=pp.email.3645&utm_campaign=snapshot&utm_content=body
.