.
The Deadly History of Socialism

by Dennis Behreandt
{ thenewamerican.com } ~ Many Americans, especially young people, want to get rid of capitalism — because of its inequality — and install socialism as a replacement... But such a plan has been tried all over the world, with disastrous results. Today, if you are a young adult, finishing high school or making your way through college, or maybe even just entering the workforce, you have been made keenly aware of inequality by your teachers, your guidance counselors, and by nearly everything you see and hear in the media. You have been told, repeatedly, and may even believe, some of the following: The one-percent exploit everyone else; white people have an unfair advantage over everyone else; workers are exploited by business owners; the justice system only works for the rich; conservatives and/or Republicans are Nazis; freedom of speech is a cover for intolerance and hate; it’s unfair that some people have more wealth than others, and they got that wealth by cheating, lying, and deceiving others, or by using their unearned “white privilege.” If you believe these things, and others like them, then you likely believe that there is only one valid solution to the problem. And that is, we must get rid of capitalism, overthrow any whiff of privilege, and institute a fair system of socialism that takes care of the underprivileged and takes away any unfair  advantages that others seem to enjoy. If this were attempted, would it work? Would such a system actually result in a better society, one that offered greater but more-evenly distributed prosperity? Well, there is no need to guess or speculate. In fact, over the last 10 to 12 decades there have been many nations that have tried to implement just the type of socialist system that is now so widely recommended for America. How did those efforts turn out? The short answer is: not very well. Let’s examine some of the outcomes...
https://www.thenewamerican.com/print-magazine/item/33174-the-deadly-history-of-socialism
.
Flynn Lawyer Response to Threats and Targeted Harassment by Chairman scumbag-Adam Schiff

by sundance
{ theconservativetreehouse.com } ~ Michael Flynn’s lawyer, Sidney Powell, responds to the threats and harassment from HPSCI Chairman scumbag-Adam Schiff and his retained political Lawfare subcontractors... Not enough people understand the role of the Lawfare group in the corruption and political weaponization of the DOJ, FBI and larger intelligence community. What Media Matters is to corrupt left-wing media, the Lawfare group is to the corrupt DOJ and FBI. All of the headline names around the seditious conspiracy against Donald Trump assemble within the network of the Lawfare group. Three days after the October 21st, 2016, FISA warrant was obtained, Benjamin Wittes outlined the insurance policy approach. FBI Director scumbag-James Comey, FBI Legal Counsel James Baker, scumbag-Comey memo recepient Daniel Richman, Deputy AG liar-Sally Yates, scumbag-Comey friend Benjamin Wittes, FBI lead agent Peter Strzok, FBI counsel Lisa Page, Mueller lead Andrew Weissmann and the Mueller team of lawyers, all of them -and more- are connected to the Lawfare group; and this network provides the sounding board for all of the weaponized approaches, including the various new legal theories as outlined within the Weissmann-Mueller Report. The Lawfare continuum is very simple. The corrupt 2015 scumbag/liar-Clinton exoneration; which became the corrupt 2016 DOJ/FBI Trump investigation; which became the corrupt 2017 DOJ/FBI Mueller probe; is currently the 2019 “impeachment” plan. Weissmann and Mueller delivering their report evolved the plan from corrupt legal theory into corrupt political targeting. Every phase within the continuum holds the same goal...
https://theconservativetreehouse.com/2019/09/09/flynn-lawyer-response-to-threats-and-targeted-harassment-by-chairman-adam-schiff/
VIDEO:  https://www.youtube.com/watch?v=udRqsEa2N9E
.
Odds-makers Contradict Polls,
Pick dinky-Warren to Face Trump in 2020 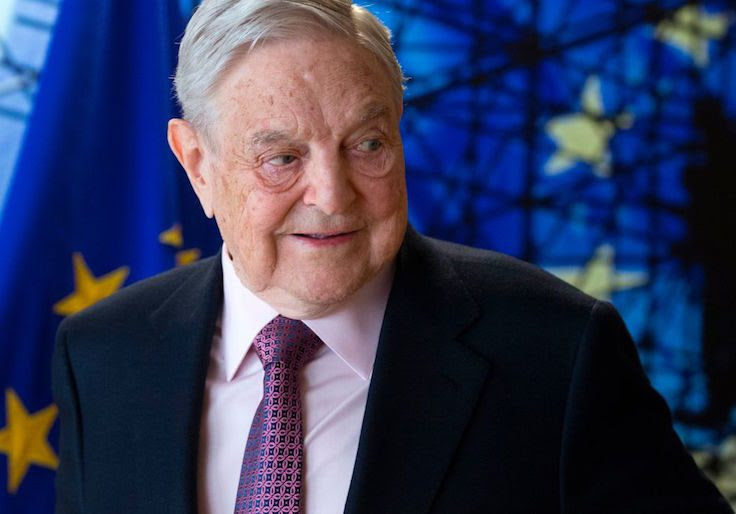 by Joe Schoffstall
{ freebeacon.com } ~ A "dark money" group that was established to push back against the judicial nominations of President Donald Trump... and which was at the forefront of the battle against Justice Brett Kavanaugh and continues to go after him to this day, was heavily financed by liberal billionaire scumbag-George Soros around the time of its inception, grants show. Demand Justice, a left-wing advocacy group, was established in 2018 and is led by Brian Fallon, the former press secretary for scumbag/liar-Hillary Clinton's failed 2016 campaign. The group does not disclose its donors and is a project of the Sixteen Thirty Fund, which falls under the umbrella of Arabella Advisors—an intricate dark money network containing dozens of liberal groups and projects. The network is used as a "pass through" entity for Democratic donors and has facilitated $1.6 billion in funds to liberal entities in recent years. Due to Demand Justice's arrangement with the Sixteen Thirty Fund, which acts as its fiscal sponsor, it does not have to file annual tax forms to the Internal Revenue Service. Those who contribute to groups housed at the Sixteen Thirty Fund can also mark the money to the fund's name, where it is passed to the intended groups while ultimately masking the destination. However, the Open Society Policy Center, scumbag-Soros's 501(c)(4) D.C.-based advocacy group, outright marked that it had sent $2.5 million to Demand Justice for general support between April 1 and June 30, 2018, according to a review of its grants. scumbag-Soros's group sent  $87,000 more to Fallon's group between Oct. 1 and Dec. 31 to "support advocacy on judicial nominations." The initial grant from scumbag-Soros's policy center, which is an affiliated entity to the Open Society Foundations, was given to Fallon's group around the time that the former scumbag/liar-Clinton henchman appeared at a secretive gathering of the Democracy Alliance, the left's largest donor club that was co-founded by scumbag-Soros, in Atlanta. The  Washington Free Beacon was present at the gathering and spotted Fallon at the bar. The Free Beacon also obtained documents showing that Fallon was there on behalf of Demand Justice, which was not publicly launched at the time...
https://freebeacon.com/politics/soros-fuels-dark-money-judicial-group-that-fights-kavanaugh-trump-nominations/
.
City In Arkansas’ Solution For Homeless
Problem, Could This Work In California?

by Daphne Moon
{ thepatriotchronicles.com } ~ No doubt some US city has major homeless issues. California is practically swimming in the trash and human excrement caused by their homeless issues caused by their liberal leadership... But what’s the solution? A Democrat in Arkansas doesn’t want to see his city become the next filthy haven to fall behind California and proposed paying the homeless to clean the streets. The idea is that by giving the homeless a living wage the city would kill two birds with one stone-clean the streets and hopefully get some of their homeless off of them. According to Fox Business, the city of Little Rock, Arkansas, has come up with a unique way to address issues with both its homeless community as well as trash in its streets, and the results have been successful. The Bridge to Work program, which began in April, pays members of the homeless community $9.25 an hour to clean up litter from its city streets. That’s more than the federal minimum wage of $7.25. The program was initially supposed to last only six months, but Mayor Frank Scott Jr. said last month he would push to extend it through the end of September 2020. The City of Little Rock spent $80,000 on the program’s first six months, 12 News Now reports. The program has been run by Canvas Community Church. Although the past five months have boasted many high points, there is still a need for volunteers to spend time with the homeless participants in an effort to have them feel a part of something they may not have felt in a while: a sense of community...
https://thepatriotchronicles.com/news-for-you/city-in-arkansas-solution-for-homeless-problem-could-this-work-in-california-video/
VIDEO:  https://www.youtube.com/watch?v=IhTmJfkBjd0
.

Michael Swartz:  On Wednesday night, CNN took the extraordinary step of devoting seven hours of airtime to a town hall meeting on a single issue. Yet it wasn’t an issue foremost on Americans’ minds — like healthcare, immigration, or even the coarsening of national dialogue. Nope, they spent all that time talking to Democrat presidential candidates about “the climate crisis.” Clearly, the struggling cable news network is still upset about President Donald Trump pulling out of the Paris climate scam.

But even though the Democrat candidates seem to be in lockstep regarding the need to radically regulate the economy by way of some variant of their Green New Deal, one fissure among them is whether to reduce our carbon-based fuel dependency by increasing our use of nuclear power — a carbon-free source that already provides about one-fifth of our electricity despite a dearth of new nuclear facilities coming online in recent years. According to the industry advocacy group NEI, nuclear power produces 55 percent of America’s carbon-free power, blowing away the wind and solar alternatives producing much of the rest.

The debate comes at an important time for both the wind and solar communities, which have traditionally depended on government subsidies and carve-outs to artificially boost their market share. Unfortunately, these sources just aren’t as clean and green as their proponents would have us believe. Solar panels are chock full of highly toxic cadmium and other heavy metals that can leach out over time and present a threat to water supplies, while the decommissioning of wind turbines that have reached the end of their 20-year lifespan presents the problem of what to do with their massive 15-ton fiberglass rotor blades. They’re currently causing havoc for at least one landfill. (One suggestion: stand them in the ground as border fencing.)

Still, Democrats believe that solar and wind are the way to go despite their flaws — flaws that include a deep dependence on the government subsidies we’ve criticized over the years. As for nuclear, Democrat opinions range from wary to downright hostile. At Wednesday night’s town hall, top-tier contender Elizabeth Warren vowed to prevent the building of new nuclear plants and shut down those remaining in operation by 2035.

(Irony alert: Democrats laud the Paris climate agreement, but France currently derives 75% of its electricity from nuclear power — albeit with government policy set to reduce that to 50% by 2035.)

Even farther to the left is commie-Bernie Sanders: “We know that the toxic waste byproducts of nuclear plants are not worth the risks of the technology’s benefit, especially in light of lessons learned from the Fukushima meltdown and the Chernobyl disaster,” as Miranda Green notes at The Hill.

“To get to our goal of 100 percent sustainable energy,” says commie-Sanders, “we will not rely on any false solutions like nuclear, geoengineering, carbon capture and sequestration, or trash incinerators.”

Green also points out the problem of nuclear waste, which makes advocacy for nuclear power a non-starter in the early primary state of Nevada, which is home to the shuttered Yucca Mountain nuclear disposal facility. Despite its flaws, though, even the most radical environmentalists grudgingly admit that nuclear power is a better option for them than opening new natural gas power-generation plants. “If the current situation continues, more nuclear power plants will likely close and be replaced primarily by natural gas, causing emissions to rise,” wrote the leftist Union of Concerned Scientists in a 2018 report. Their answer, however, as echoed by the Democrat presidential field? More taxes and regulations on ratepayers and utilities.

The question that should be asked of all these presidential hopefuls, though, is just what their plans would do to our nation’s economy. Fossil fuels have been an economic boon, given that they’re reliable, plentiful, and inexpensive, and given that the U.S. is now the top oil and natural gas producer in the world. Why mess with success?   ~The Patriot Post