.
If liar-Pelosi Could Pause the Impeachment, Congress Could Pass the USMCA

by sundance
{ theconservativetreehouse.com } ~ White House trade and manufacturing policy advisor Peter Navarro appears on Fox News to discuss two key economic and trade issues... (1) the current status of U.S-China trade discussions “round one”; and (2) the status of USMCA ratification liar-Pelosi’s delay. Nothing in the China trade discussion is solid, until everything in the China trade discussion is settled; this is one of the key aspects to President Trump’s directive to USTR Robert Lighthizer. No deal is a more favorable outcome than the construct of a trade deal that cannot be enforced. On the USMCA ratification, again it all falls upon the politics of liar-Pelosi. The agreement would pass tomorrow if it were put up to a vote; there is no controversy. Speaker liar-Pelosi is holding back the ratification vote for pure political purposes. USMCA ratification is the first domino in long-chain of ‘America First’ economic benefits. As soon as USMCA passes a wave of North American investment will surge. The downstream consequences includes leverage for U.S-China, U.S-Europe, U.S-India and U.S-U.K trade agreements.  https://theconservativetreehouse.com/2019/11/17/peter-navarro-if-pelosi-could-pause-the-impeachment-congress-could-pass-the-usmca/
VIDEO:  https://www.youtube.com/watch?v=uES5qYrSLuU&feature=emb_title
.
John Ratcliffe: “The Inspector General is going
to have to find that there were things
that were done wrong”

by sundance
{ theconservativetreehouse.com/ } ~  As a reminder John Ratcliffe is one of only four members of congress who has reviewed all of the classified documents that surrounds the current background for the Inspector General report on FISA abuse... That said, the quoted comment from Ratcliffe, while it will be overlooked by most, is the first visible sign reconciling a fundamental challenge previously highlighted.  In the 2018 IG report on FBI conduct in the 2016 election, the IG stated there was no evidence of any FBI activity being taken for political intents. Yes, there was a tremendous amount of politically motivated evidence noted within the report; but the top-line statement by Horowitz was counter to the underlying evidence. A year ago that led us to ask: how could the IG outline political motives in the FISA investigation, if he previously stated there was no politically motivated action by the FBI? The statement today by Rep. John Ratcliffe seems to speak to this issue. The implication within the words is that the evidence is so overwhelming the IG has few options.
https://theconservativetreehouse.com/2019/11/17/sunday-talks-john-ratcliffe-the-inspector-general-is-going-to-have-to-find-that-there-were-things-that-were-done-wrong/
VIDEO:  https://www.youtube.com/watch?v=BohA_HUVNSE&feature=emb_title
.
Jim Jordan -vs- Margaret Brennan – Important
Note: Media Given Leaked Sealed Transcripts
from Friday Depositions

by sundance
theconservativetreehouse.com } ~ Representative Jim Jordan appears on CBS Face The Nation to discuss the ongoing impeachment fiasco. Ms. Brennan struggles to define a new journalistic concept for “first-hand” information as she claims David Holmes... who claims to have overheard half of a phone conversation that two other people were having, is a “first-hand” witness. Jordan points out that Ms. Brennan is quoting from a seal transcript given to her by scumbag/liar-Adam Schiff that has not been released. Transcript Below...  https://theconservativetreehouse.com/2019/11/17/sunday-talks-jim-jordan-vs-margaret-brennan-important-note-media-given-leaked-sealed-transcripts-from-friday-depositions/
VIDEO:  https://www.youtube.com/watch?v=RCuTPtTMZfA&feature=emb_title
.
Former Ambassador Marie Yovanovitch Appears
To Contradict Herself During Testimony
On loose lips liar-Bidens, Burisma 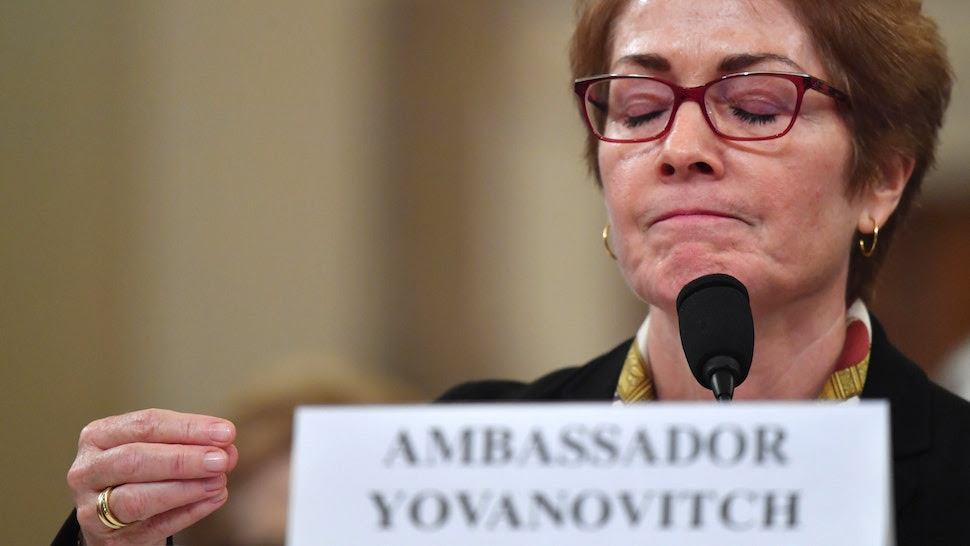 By  Ryan Saavedra
{ dailywire.com } ~ Former United States Ambassador to Ukraine Marie Yovanovitch appeared to contradict herself on Friday during Democrats’ impeachment inquiry hearing... stating that the scumbag/liar-nObama administration never raised the issue of Hunter Biden and Ukrainian gas company Burisma but then later stating that the scumbag/liar-nObama administration prepped her on that exact issue.  Here is an exchange between Yovanovitch and Rep. Elise Stefanik (R-NY): Stefanik: The first time that you personally became aware of Burisma was actually when you were being prepared by the scumbag/liar-nObama State Department for your Senate confirmation hearings and this was in the form of practice questions and answers. This was your deposition. And you testified that in this particular practice Q&A with the scumbag/liar-nObama State Department, it wasn’t just generally about Burisma and corruption, it was specifically about Hunter Biden and Burisma. Is that correct? Yovanovitch: Yes, it is. Stefanik: And the exact quote from your testimony is, “The way the question was phrased in this model Q&A was, ‘what can you tell us about Hunter Biden being named to the board of Burisma?'” So for the millions of Americans watching, President scumbag/liar-nObama’s own State Department was so concerned about potential conflicts of interest from Hunter Biden’s role at Burisma that they raised it themselves while prepping this wonderful ambassador nominee before her confirmation and yet our Democratic colleagues and the Chairman of this committee cry foul when we dare ask that same question that the scumbag/liar-nObama State Department was so concerned about. Yet, earlier during the hearing Yovanovitch gave what appeared to be contradictory remarks...
https://www.dailywire.com/news/former-ambassador-marie-yovanovitch-appears-to-contradict-herself-during-testimony-on-bidens-burisma?utm_source=facebook&utm_medium=social&utm_campaign=benshapiro
VIDEO 1:  https://twitter.com/TCPigott/status/1195417332853723138?ref_src=twsrc%5Etfw%7Ctwcamp%5Etweetembed%7Ctwterm%5E1195417332853723138&ref_url=https%3A%2F%2Fwww.dailywire.com%2Fnews%2Fformer-ambassador-marie-yovanovitch-appears-to-contradict-herself-during-testimony-on-bidens-burisma%3Futm_source%3Dfacebook%26utm_medium%3Dsocial%26utm_campaign%3Dbenshapiro
VIDEO 2:  https://twitter.com/TCPigott/status/1195417528492810245?ref_src=twsrc%5Etfw%7Ctwcamp%5Etweetembed%7Ctwterm%5E1195417528492810245&ref_url=https%3A%2F%2Fwww.dailywire.com%2Fnews%2Fformer-ambassador-marie-yovanovitch-appears-to-contradict-herself-during-testimony-on-bidens-burisma%3Futm_source%3Dfacebook%26utm_medium%3Dsocial%26utm_campaign%3Dbenshapiro
VIDEO 3:  https://twitter.com/SteveGuest/status/1195428954905219073?ref_src=twsrc%5Etfw%7Ctwcamp%5Etweetembed%7Ctwterm%5E1195428954905219073&ref_url=https%3A%2F%2Fwww.dailywire.com%2Fnews%2Fformer-ambassador-marie-yovanovitch-appears-to-contradict-herself-during-testimony-on-bidens-burisma%3Futm_source%3Dfacebook%26utm_medium%3Dsocial%26utm_campaign%3Dbenshapiro
.
California Dems Flood Colorado With Cash
Ahead of National Popular Vote Referendum 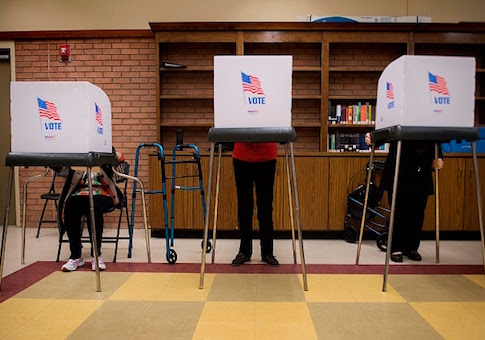 by Todd Shepherd
{ freebeacon.com } ~ California Democrats have been cutting six-figure checks to promote the National Popular Vote Interstate Compact (NPV) in Colorado... ahead of a referendum vote in the state next November. The NPV would change how the Electoral College operates without amending the Constitution. It pledges a state's Electoral College votes to the candidate receiving the most votes nationwide in a presidential election. The Colorado political committee Yes on National Popular Vote has collected just under $750,000 since its creation in late July. Over 98 percent of that money is from California donors, most of which is courtesy of a $500,000 donation from Stephen Silberstein, a board member of the National Popular Vote nonprofit that has driven the movement for more than a decade. Craig Barratt, a technology executive and longtime Democratic donor, gave $100,000. John Koza, chair of the National Popular Vote, contributed an additional $55,000.  Democratic calls for changes to the Electoral College gained traction following the 2000 presidential contest in which George W. Bush narrowly won the Electoral College but received fewer votes nationally than his opponent scumbag-Al Gore. Enthusiasm surged again in 2016 after Donald Trump also won the Electoral College without garnering the most votes nationwide. Democratic presidential candidates such as Massachusetts senator Elizabeth dinky/liar-Warren and Vermont senator commie-Bernie Sanders (I.) have advocated for eliminating the Electoral College. Opponents of the NPV argue that less populated states like Colorado will lose some of their clout in presidential years, and heavily populated coastal areas will dominate the outcome... Why waste your donation when your homeless and streets need cleaning up.
https://freebeacon.com/politics/california-dems-flood-colorado-with-cash-ahead-of-national-popular-vote-referendum/?utm_source=Freedom+Mail&utm_campaign=dc41f9a531-EMAIL_CAMPAIGN_2019_11_17_09_04_COPY_01&utm_medium=email&utm_term=0_b5e6e0e9ea-dc41f9a531-45611665
.
Netanyahu: Government backed by
Joint List an existential threat to Israel 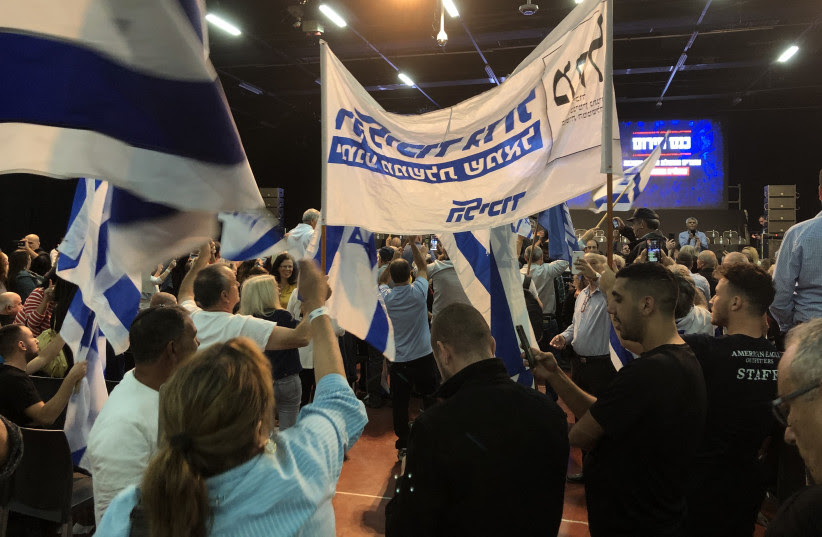 By LAHAV HARKOV
{ jpost.com } ~ Prime Minister Benjamin Netanyahu railed against the possibility that Blue and White may form a minority government supported by the Joint List... saying that it would endanger Israel’s security. A third election in one years “would be bad for Israel...but there’s something much worse,” Netanyahu said, “a dangerous minority government dependent on Joint List MKs Ayman Odeh and Ahmed Tibi. It would be an existential threat to Israel.”  Netanyahu pointed out that lawmakers in the Joint List have expressed support for terrorist groups that attack Israel and, just last week, called IDF soldiers murderers. “They want IDF soldiers on trial as war criminals,” he said, then addressed remarks to Blue and White leader Benny Gantz, a former IDF chief of staff: “They want you on trial as a war criminal. What are you thinking?” "The citizens of the south were not honored with an "emergency meeting," not even the sick who were thrown in the halls in the hospitals, not the elderly and not the disabled," said Blue and White in response to the event. "As usual, Netanyahu only looks out for Netanyahu."
https://www.jpost.com/Israel-News/In-Likud-emergency-event-banners-welcome-third-elections-round-608123
.

Culture Beat:  That’s a nice charity ya got there. It’d be a shame if anything happened to it.

If anyone still doubts that the Rainbow Mafia is fundamentally opposed to Christianity, here’s yet another story to dispel such uncertainty. British pop singer Ellie Goulding, who was scheduled to perform the halftime show at the Dallas Cowboys’ Thanksgiving Day football game, recently threatened to cancel her show if the Salvation Army, an age-old Christian charity, didn’t publicly pledge support for the “LGBTQ community.”

What instigated this attack on one of the world’s oldest and most well-known Christian charities? A social-media message. Earlier this week, Goulding wrote on social media, “Ok this is going to be LIT (can I say that when I’m 32) I’m excited to announce I’ll be kicking off the @salvationarmyus Red Kettle Campaign at the @dallascowboys halftime show this Thanksgiving! I can also confirm that @thekearnal86 will hereby be launching his acting career. Tune in to CBS for the game and join us this holiday season in the #FightForGood.”

She followed that message: “Ok so maybe hairnet not my strongest look but thank you @salvationarmyus for having us in New York. As you know, I have spent a lot of time in shelters in London, and this was my first time in NYC… The Salvation Army annually helps more than 23 million Americans overcome poverty, addiction and economic hardships through a range of social services. By providing food for the hungry, emergency relief for disaster survivors, rehabilitation for those suffering from drug and alcohol abuse, and clothing and shelter for people in need. I sat and spoke to several people who had come in from the bitter cold for some food (they serve to over 150 per day here), warmth and perhaps a chat with one of the volunteers.”

So far, so good, right? But then Goulding was inundated with messages from her leftist fans telling her that the Salvation Army was “extremely homo/transphobic,” a cancel-culture attack that Chick-fil-A is all too familiar with. Naturally, the singer quickly changed her tune, demanding that the Salvation Army demonstrate its fealty by making a “solid, committed pledge or donation to the LGBTQ community.”

The Salvation Army’s response was graceful and dignified: “With an organization of our size and history, myths can perpetuate. An individual’s sexual or gender identity, religion, or lifestyle has no bearing on our willingness to provide service. We stand firmly behind our mission to meet human needs in His name without discrimination.” In fact, the Salvation Army’s own website notes, “Almost one-third of transgender people have been rejected from an emergency shelter. The Salvation Army created a dorm in Las Vegas to offer safety and shelter to this group, which is statistically more vulnerable to assault. … LGBTQ youth contemplate suicide at almost three times the rate of heterosexual youth. With a presence in every zip code in the nation, we’re committed to providing spiritual and emotional care to those in need regardless of race, gender, ethnicity, sexual orientation or gender identity.”

Was this merely a publicity stunt for the singer? Goulding has since confirmed that she’ll perform as planned. As for the Rainbow Mafia’s smear of the Salvation Army, we hope fair-minded people of all stripes will begin to reject these toxic tactics.   ~The Patriot Post