0
TheFrontPageCover
~ Featuring ~
Is Being Poor a Good Reason for Asylum?

by sundance
{ theconservativetreehouse.com } ~ This was rumored earlier today New York Times and Axios. Now Confirmed. President Trump has announced via Twitter that Director of National Intelligence Dan Coats is departing... He will be leaving office on August 15th, 2019.  President Trump has announced the nomination of Representative John Ratcliffe to be the next head of the Office of Director of National Intelligence. Representative John Ratcliffe is a member of the House Judici} ~ary Committee and House Intelligence Committee. Ratcliffe is one of only a few people who has seen all of the unredacted DOJ and FBI evidence within the documents congress has previously asked the President to declassify. Representative John Ratcliffe currently holds a top-level security clearance. John Ratcliffe is very even tempered albeit direct by natural disposition. Ratcliffe’s nomination, and confirmation should beunremarkable. However, due to the information that Ratcliffe already holds about the overall intelligence community operation in 2015 through 2019, we can expect the deepest part of the Deep State to immediately begin a process to impede any confirmation effort. Ratcliffe is a risk, and he will likely be controversialized in a political effort to block his nomination. Earlier today Ratcliffe spoke to Maria Bartiromo about ongoing concerns around the DOJ, CIA, and FBI operations in 2016.
https://theconservativetreehouse.com/2019/07/28/breaking-odni-dan-coats-gone-president-trump-nominates-john-ratcliffe-as-replacement/
VIDEO:  https://www.youtube.com/watch?v=il6QX9vqOl8
.
Mick Mulvaney -vs- Margaret Brennan
by sundance
{ theconservativetreehouse.com } ~ You know Paul Ryan is pushing Fox News to jump the shark when…. After a few minutes of insufferable UniParty propaganda, even CBS is less fake news... Margaret Brennan clutches her pearls at the outrage of Trump tweets and then settles in to the typical DC UniParty narrative:  ‘We are spending too much, but lets spend more on the Central American migrants.’ Mamet was correct: to retain positions that are inherently hypocritical, leftists have to disconnect their hypothalamus, sever their hippo campus, and pretend not to know things: aka Cognitive Dissonance.
https://theconservativetreehouse.com/2019/07/28/muh-uniparty-sunday-talks-mick-mulvaney-vs-margaret-brennan/
VIDEO:  https://www.youtube.com/watch?v=dwmHBowIzjg
.
George Papadopoulos Discusses Mueller’s
FARA Set-up With Maria Bartiromo
by sundance
{ theconservativetreehouse.com } ~ On the positive side George Papadopoulos appears to have a solid understanding of the motive behind the $10,000 given to him by intelligence asset Charles Tawil in Israel... Mr. Papadopoulos correctly identifies the purpose of the $10k as a FARA set-up designed by the DOJ-NSD ‘small group’ which evolved into the special counsel team. #1) Papadopoulos was lured to Israel and paid in Israel to give the outline of a FARA premise ie. Papadopoulos is an agent of Israel. #2) Bringing $10,000 or more in cash into the U.S., without reporting, is a violation of U.S. treasury laws. Add into that aspect the FARA violation and the money can be compounded into #3) laundering charges. A “laundering” charge applies if the money is illegally obtained. The FARA violation would be the *illegal* aspect making the treasury charges heavier. Note: the use of the airport baggage-check avoids the need for a search warrant the agents didn’t have one. Andrew Weissmann and Brandon Van Grack special counsel 951/FARA expert were  conducting an entrapment scheme that would have ended up with three violations of law: (1) Treasury violation; (2) FARA violation; (3) Money laundering…. All they needed was Papadopoulos to carry the undeclared cash into the U.S.  https://theconservativetreehouse.com/2019/07/28/george-papadopoulos-discusses-muellers-fara-set-up-with-maria-bartiromo/
VIDEO:   https://www.youtube.com/watch?v=LGgFFr7xdFc
.
CIA has 'come clean' but scumbag/commie-John Brennan remains a concern 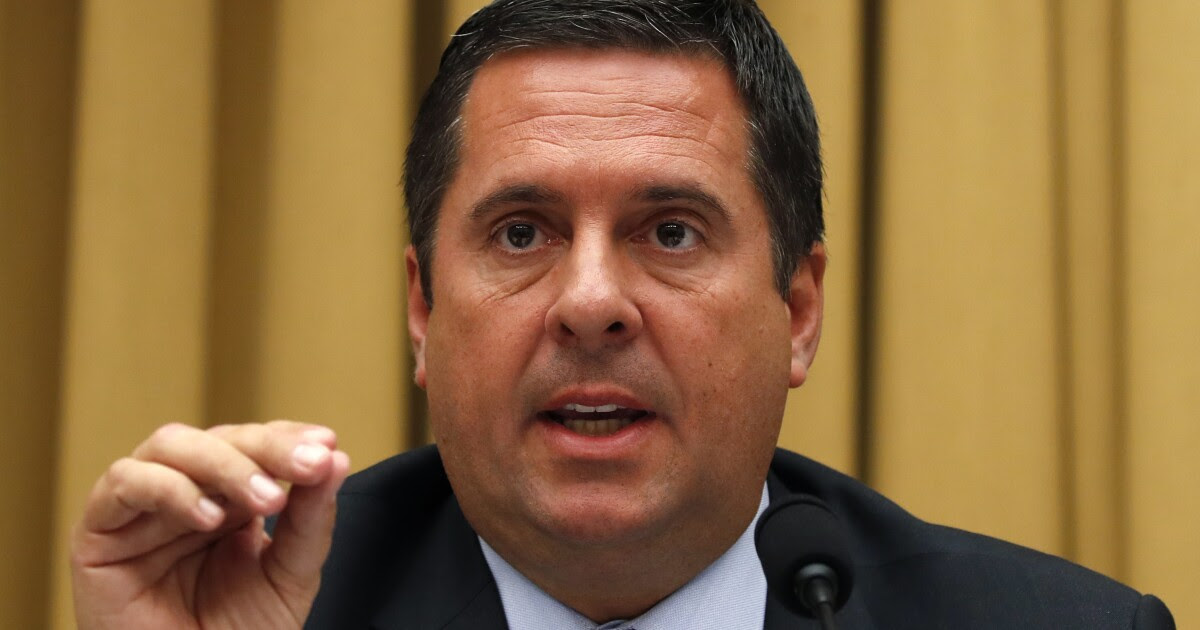 by Daniel Chaitin & Jerry Dunleavy
{ washingtonexaminer.com } ~ Rep. Devin Nunes, the top Republican on the House Intelligence Committee, said the CIA has "come clean" for his review of the early stages of the Trump-Russia investigation... But during a Fox News interview Sunday, he said former CIA Director scumbag/commie-John Brennan still needs to answer questions. Host Maria Bartiromo asked the California congressman which agency, the FBI or CIA, was more likely to have lined up confidential sources to make contact with members of the Trump campaign, under} ~ suspicion for ties to Russia. “Well, as you know, we have jurisdiction over both FBI and CIA and what they do overseas," Nunes said on Sunday Morning Futures. "We have lots of information about FBI people going overseas and doing things, we don’t really have any information from CIA." He added, "So far, they’ve really come clean. I would say the only one who has questions to answer is scumbag/commie-John Brennan, because we now know that scumbag/commie-John Brennan briefed Harry dinky-Reid on the dossier in August 2016. At the same time he never briefed me or Paul Ryan who was the speaker of the House at the time.” Nunes was chairman of the House Intelligence Committee at the time...
https://www.washingtonexaminer.com/news/devin-nunes-cia-has-come-clean-but-john-brennan-remains-a-concern?utm_source=WEX_Breaking%20News%20Alert_07/28/2019&utm_medium=email&utm_campaign=WEX_Breaking%20News&rid=5261
VIDEO:   https://www.youtube.com/watch?v=wr-3ImMFMS4
.
scumbag-Schiff: Mueller testimony about
Russian interference was 'chilling' 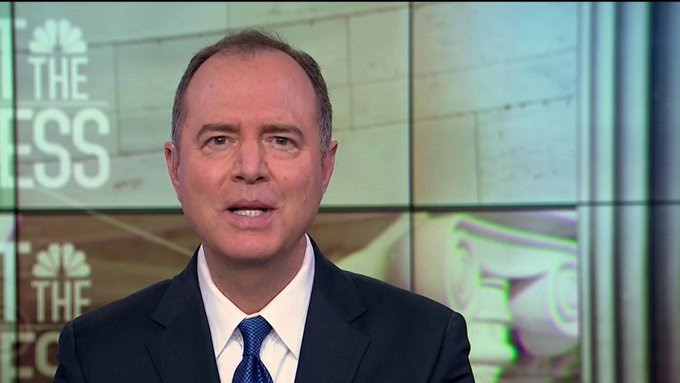 By REBECCA KLAR
{ thehill.com } ~ House Intelligence Committee Chairman scumbag-Adam Schiff (D-Calif.) said the most "chilling" portion of former special counsel Robert Mueller's testimony was his confirmation that Russia... never stopped interfering in U.S. politics. "I also found ... most chilling the fact that the special counsel confirmed the Russians have never stopped their interference. They're at it again," scumbag-Schiff said Sunday on NBC's "Meet the Press." "And he is desperately concerned, as I am as well, that the acceptance of foreign help, the willingness to receive it, may become a new normal under this president. And that, as the special counsel said, ought to alarm every American. "Mueller testified last week in front of the House Intelligence and Judiciary committees on the findings outlined in his 448-page report. "The special counsel made it very clear that the Trump campaign welcomed Russian help, built it into their campaign plan, never reported it, made full use of it and then lied about it and that there were multiple acts by the president that constitute obstruction of justice," scumbag-Schiff said. "Essentially, this was a campaign and a presidential candidate characterized by disloyalty to country, by greed and by lies." scumbag-Schiff has not come forward to call for impeachment inquiries to begin. Although he admitted to NBC's Chuck Todd that he is worried about the precedent it may set, he said he's equally worried "about the message of taking an impeachment case to trial, losing that case, having the president acquitted and then having an adjudication that this conduct is not impeachable."... scumbag-Schiff is feeding the American people a lie and he knows it.
https://thehill.com/homenews/house/455054-schiff-mueller-confirmed-russia-is-at-it-again
VIDEO:   https://twitter.com/MeetThePress/status/1155467035213815808?ref_src=twsrc%5Etfw%7Ctwcamp%5Etweetembed%7Ctwterm%5E1155467035213815808&ref_url=https%3A%2F%2Fthehill.com%2Fhomenews%2Fhouse%2F455054-schiff-mueller-confirmed-russia-is-at-it-again
.

.
Is Being Poor a Good Reason for Asylum?

Michael Swartz:  It’s become routine along our southern border — a “family” enters the United States declaring the need for the protection of asylum in our country. And while the normal definition of asylum comes from fleeing one nation’s war and strife to take refuge in another nation deemed to be more safe, these asylum seekers mostly aren’t fleeing a nation actively at war. Not only that, migrants are eschewing what would be considered a safe haven of Mexico in their quest to reach the United States.

For those who remember Guatemala as one of those Central American “banana republics” you learned about in school, it should be noted that its main export nowadays isn’t agricultural. Instead, it is — perhaps intentionally — exporting its population at an increasing rate. It’s reached the point that pockets of the nation — specifically, the medium-sized city of Joyubaj (population 100,000 and declining) — have laid claim to being the hometown of the second-largest number of U.S. deportees back to Guatemala, barely trailing the much larger national capital of Guatemala City.

But the lure toward “El Norte” is easy money from available work. Those who reach the United States send back remittances, and that source of funds now makes up 1/8 of the Guatemalan GDP. It’s made possible by wage rates in America where it takes a laborer, even one making minimum wage, a week to make what may take a month or more to earn back home. “The United States helped me more than the Guatemala government ever did,” said one 40-year-old worker, who despite being deported saved enough money in three years of working in the U.S. while awaiting deportation to return and build a palatial three-story home in his hometown of Todos Santos. He and his wife live in Guatemala, while their two teenage children now live with relatives in the United States.

Yet the traditional idea behind asylum wasn’t that of wanting to build a large house back in the homeland. While Central American nations have a reputation for instability, a recent survey claimed less than 1% leave Guatemala due to violence. But getting just one family member into America provides the golden ticket to relative prosperity, with younger members of the family pouring across our border, working for a few years, then returning home once the deportation orders become final to enjoy their newfound status.

This international American Dream has been made possible on the U.S. end by a lack of motivation to address the problem through tighter border security and stricter verification of the legal status of unskilled and semi-skilled workers who frequent the construction sites, restaurants, landscape companies, and poultry-processing plants around our nation. One party likes the potential pool of dependent voters, while a sector of the other loves the cheap labor that “does jobs Americans won’t do.”

And the clash between those interests and the Trump administration has led to the heated rhetoric about “concentration camps” along the border, not to mention the tragic drowning deaths of a father and daughter trying to circumvent the standard asylum process for purely economic reasons. Trump has also been stung by a string of judicial defeats, most recently as he tried to address the asylum question by the commonsense method of requiring these Guatemalan migrants to first seek asylum in Mexico (or another third country) rather than the United States, only receiving asylum here if they were turned down elsewhere. “This rule will decrease forum shopping by economic migrants and those who seek to exploit our asylum system to obtain entry to the United States,” said Attorney General William Barr when the rules were announced earlier this month.

But in a different sort of forum shopping, the ink was barely dry on the new regulations when a judge appointed by Trump’s most recent predecessor stepped in to thwart the process. So the asylum games continue and the so-called “concentration camps” are stretched even further beyond capacity.

All this is the unfortunate byproduct of making immigration a political issue rather than a Rule of Law priority. Within the last decade, both political parties had control of both the White House and Congress, yet neither made any significant progress on addressing the issue. While it’s a really good thing the American economy is strong enough to indirectly help such far-flung locations as Joyubaj and Todos Santos, it could work a lot better if we had an orderly system to allow the laborers we need and the diplomacy to work with the nations in our hemisphere to improve their own conditions so they wouldn’t feel the need to export their people just to keep their rickety economic ships of state afloat. One shouldn’t need to come to America to make a Guatemalan Dream of home ownership and status come true.  ~The Patriot Post