by sundance
{ theconservativetreehouse.com } ~ Boy howdy, Maria Bartiromo has the big picture of the 2015/2016 political weaponization of the intelligence apparatus exactly right. In this interesting interview with Senate Judiciary Chairman Lindsey Graham... both Bartriromo and Graham discuss the scale and scope of the 2015/2016 effort to stop Trump. Interestingly, in a shift of tone, Senator Graham outlines what this surveillance operation means when contrast against the structures of our constitutional government. Traditionally Lindsey Graham would bury any issue adverse to the institutions of the DC administrative state. So there’s two possibilities here: (A) Graham has fundamentally changed his outlook toward the dangers of the institutions within government; or, (B) Graham is doing a full ‘Castellanos‘ and embracing the controversy in order to control the risk to the administrative state with intent to protect it. The latter is tradition. The best way for DC to protect itself from the mob’s approach is to lead it themselves. The modern GOPe club has used this defense sending agents to the front of the grassroots anger in order to control the outcome. [Fast-n-Furious, IRS targeting, Benghazi, etc.]...
https://theconservativetreehouse.com/2019/05/12/senator-lindsey-graham-discusses-2016-spygate-with-maria-bartiromo/
VIDEO:  https://www.youtube.com/watch?v=7WwO-5sqO5o
.
rino-Richard Burr's subpoena of Donald
Trump Jr. 'can only lead to mischief' 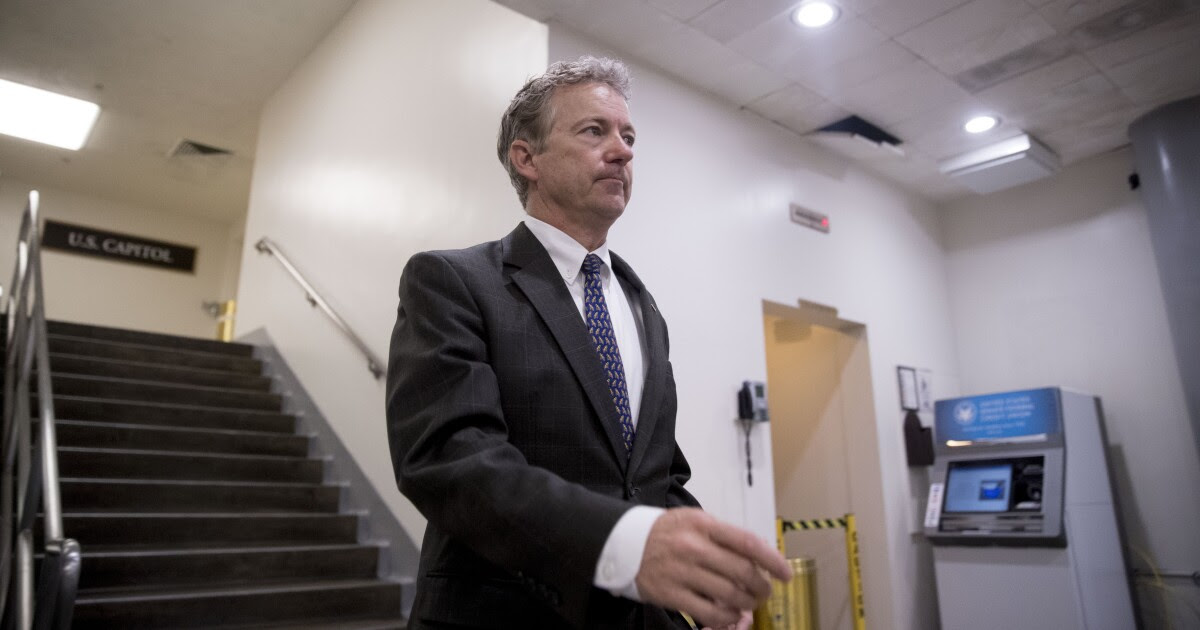 by Anna Giaritelli
{ washingtonexaminer.com } ~ Sen. Rand Paul, R-Ky., on Sunday accused Senate Intelligence Chairman rino-Richard Burr, R-N.C., of working with Democrats to lay a trap for Donald Trump Jr... by subpoenaing him to testify before the committee despite the federal investigation having concluded. “I think it’s a real travesty of justice. I think it’s very unfair to the president and the president‘s family on this. dirty cop-Mueller spent $35 million and two years, and the president was cleared," Paul told John Catsimatidis, radio host for AM 970 in New York, Sunday morning. Paul said he doesn't see any positive reason the Republican chairman could have brought in Trump Jr. “It can only lead to mischief ... This is not a friendly maneuver. This is an adversarial maneuver to bring him in under oath. And the Democrats will try to trip him up and get him to make some kind of mistake," Paul said. Paul said he expects Democratic senators to use dino-Burr's subpoena to "go after the Trump family" and "trick" President Trump's eldest son into saying something that contradicts his previous statements. Then, lawmakers could go after prosecuting Trump Jr. The Senate Intelligence Committee is nearing completion in its own investigation into the Trump campaign's relationship with the Russian government during the 2016 election. rino-Burr issued a subpoena for Trump Jr. weeks ago, but the action was first reported last week...
https://www.washingtonexaminer.com/news/rand-paul-richard-burrs-subpoena-of-donald-trump-jr-can-only-lead-to-mischief?utm_source=WEX_Breaking%20News%20Alert_05/12/2019&utm_medium=email&utm_campaign=WEX_Breaking%20News&rid=5261
.
Chinese officials warn Christianity
is 'enormous harm' to society 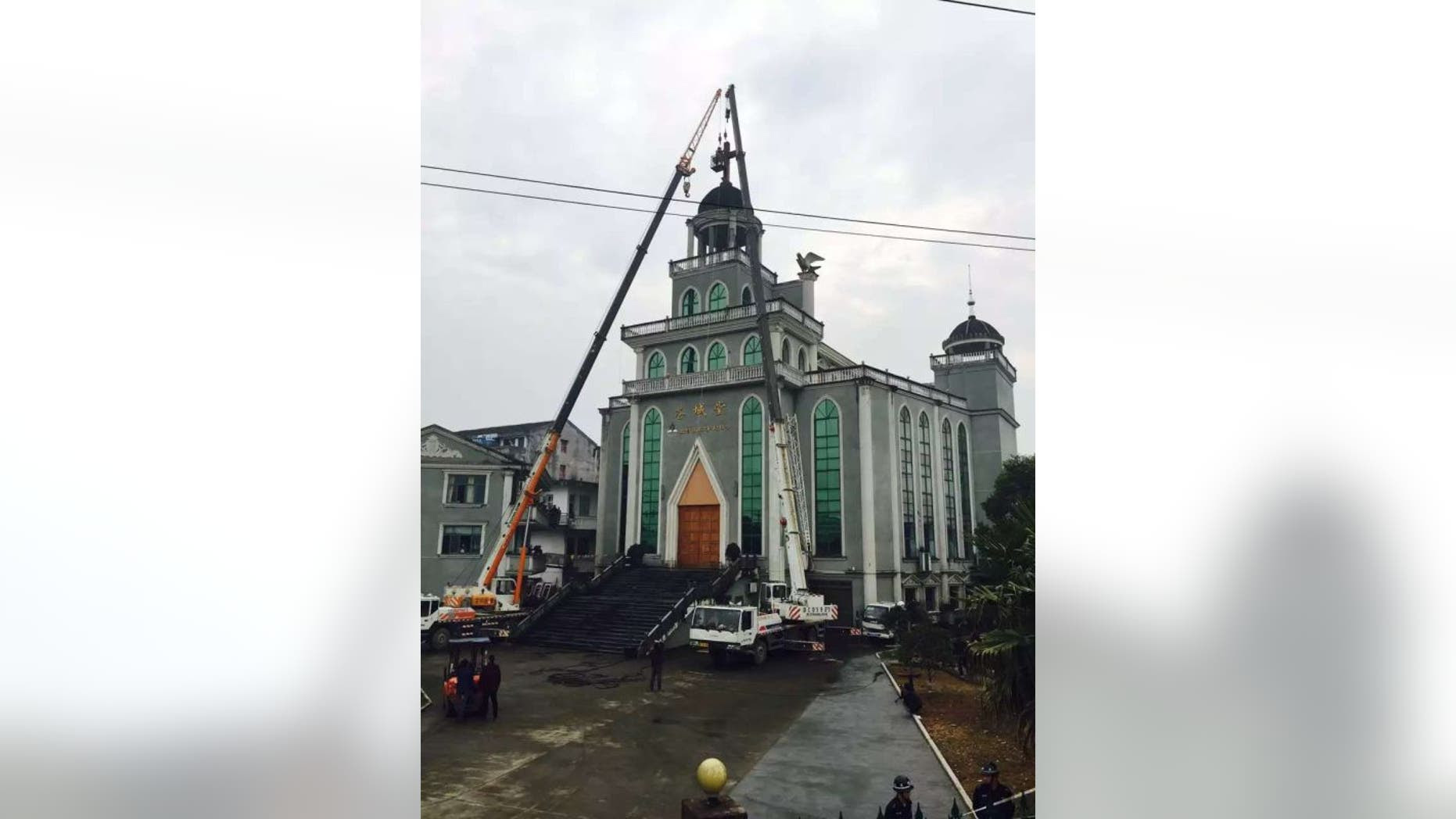 by Caleb Parke
{ foxnews.com } ~ Communist Party members in a central Chinese province were told Christianity is harmful to their country during a recent seminar... Religious experts see it as a sign the government is continuing its crackdown on Christianity and other religious minorities, with Christian persecution at historic highs around the world. The Hebi Municipal Radio Administrative Bureau gave a presentation titled "Christianity’s Enormous Harm on China’s Security," to party members in the city of Hebi in China's Henan province, reported ChinaAid, a Christian human rights organization that promotes religious freedom and rule of law in China. “The Chinese government often views religions, including Christianity, as foreign attempts to undermine its rule, even though there is no evidential basis for such a claim,” the ChinaAid report states. “As a result, they often try to suppress religious adherents, and they openly forbid Communist Party members from practicing a religion.” The telecommunications agency allegedly encouraged the communist party members to maintain "correct views" about religion and avoid being persuaded by its ideology. Hebi Municipal Radio Administrative Bureau in Henan publicly admitted to holding the seminar on its WeChat page before deleting it two days later, the Union of Catholic Asian News (UCAN) reported...   https://www.foxnews.com/world/chinese-warn-christianity-enormous-harm-communist-society?fbclid=IwAR2itAFN6E6EArW37gKkvbhkJ4QEUgDWL7A376z4xhny0x4DbBDe5kAWLSE
.
Chaos in Sudan and the rest
of North Africa threatens all of us 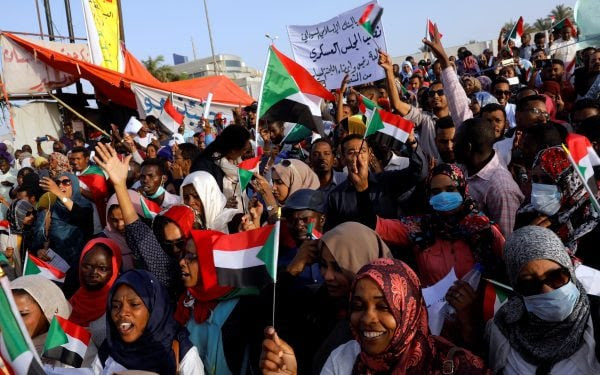 by Emily Estelle
{ latimes.com } ~ Two African dictators, who between them ruled 85 million people, were ousted from office last month. This was no coincidence... The popular unrest that dislodged Sudanese President Omar Hassan Ahmed Bashir and Algerian President Abdelaziz Bouteflika is part of a wave of conflict engulfing northern Africa and posing grave risks to stability in the region and beyond. The discord is likely to produce major new refugee flows and increase the potential for a dramatic expansion of Islamic State and Al Qaeda in northern Africa. It’s not that this region hasn’t known conflict before. But even during the Arab Spring, which rocked states large and small, only small states experienced the kind of total collapse that can usher in major transnational threats. There was the 2011 revolution in Libya, for example, which removed the government and spawned a civil war that continues today. But Libya’s total population is just 6.5 million. Libya’s destabilization contributed to a rebellion and coup in neighboring Mali population 19.7 million. Combined with the long-term crisis afflicting Somalia population 15.6 million, that sounds like a full-blown regional crisis. But these three states together are barely the size of one of the two states now in danger of collapsing, Algeria and Sudan. Six weeks of massive demonstrations in Algeria population 42.7 million forced the longtime president to step down on April 2. Protesters are now seeking to dismantle the country’s entire corrupt system. The protests have been peaceful so far, but the situation is fraught—the army may take control, and many potential trajectories are violent. A turbulent Algeria would be hard-pressed to remain the bulwark it has been against chaos from neighboring Libya and Mali. Change has also reached Sudan population 42.5 million, where the army deposed the longtime president on April 11 after four months of protests and crackdowns. This military coup is likely the preamble to internal conflict and continued unrest. Sudan, though known for its history of conflict, has been stable in recent years compared to several of its neighbors and has made some progress on counter-terrorism. These gains will reverse if it dissolves into chaos...
https://www.latimes.com/opinion/op-ed/la-oe-estelle-north-africa-sudan-algeria-conflict-20190510-story.html?mkt_tok=eyJpIjoiTm1SaU5URTBZV00yWWpBeSIsInQiOiI0OWxRWGo1ZHpINHVkWHFIemVGUzRjXC9kZFE0YU0xS2dDYXBqOGxOcWhEbWFoaGtVUlJ3SDN3WU9UeCtIWHhnV21uc04wTWYyME4xVzlORFhXSEtlN1VydGwwQ0wzbG9aQ1FZc3M3YkY0a3RMOXpvWjRJRVRCK3RFb2tkQnlDMVYifQ%3D%3D
.
FBI Raids Alabama Terror Camp
Connected To Son Of RADICAL Imam by Kerry Picket
{ kerrypicket.com } ~ The FBI uncovered a homegrown terror training camp in Alabama Friday owned by a group of terrorists headed up by the son of Siraj Ibn Wahhaj... an Imam who once caused a stir at the 2012  Democratic National Convention in Charlotte. This is the second domestic terror training camp in two years that the younger Wahhaj has been connected to. According to Sinclair Broadcasting, the FBI field office in Mobile described the rundown plot of land in Macon County as a “makeshift military-style obstacle course,” on property owned by a small group of jihadists and Wahhaj. “Just because you’re in a small town or a small state does not mean you might not potentially have individuals engaged in the types of activities that would call into question threats to national security,” Tim Fuhrman, Former Special Agent with the FBI field office in Mobile, said. The land reportedly appears similar to the terror compound found in New Mexico last year, where federal prosecutors say Wahhaj and four other suspects were teaching children how to carry out terror attacks on American soil. The remains of a child were found on the New Mexico property along with 11 malnourished children. Wahhaj’s father distanced himself from his son when the New Mexico compound case came to light, claiming he previously cut ties with his son...   https://kerrypicket.com/fbi-raids-alabama-terror-camp-connected-son-radical-imam/
VIDEO:  https://twitter.com/PorterMedium/status/1127311934162915331?ref_src=twsrc%5Etfw%7Ctwcamp%5Etweetembed%7Ctwterm%5E1127311934162915331&ref_url=https%3A%2F%2Fkerrypicket.com%2Ffbi-raids-alabama-terror-camp-connected-son-radical-imam%2F
.
.

The U.S. unemployment rate fell to its lowest level in 50 years, and more than a quarter million jobs were added in the month of April alone.

As Susan Ferrechio writes at the Washington Examiner, “Friday’s report on job gains is just another in a series of indicators that show the economy under President Trump is booming. Republicans and the president credit policies they put in place to reduce government regulations and taxes. The party’s signature achievement, a comprehensive tax reform law, lowered taxes not only for individuals but small businesses and corporations.”

But Democrats simply can’t begrudge Donald Trump (or any Republican president) any credit for what is unequivocally good news for all Americans. Consequently, when the economy roars under Republican leadership, Democrats drum up a lot of deceptive ways to either distract us from the good news or to simply give themselves credit.

For example, Democrat Sens. Amy Klobuchar and scumbag-Cory Booker, both 2020 presidential candidates, argue that former President Barack scumbag/liar-nObama really started the economic recovery we’re enjoying today. They’re referring to the same scumbag/liar-nObama who said America’s lost jobs would never come back, who referred to 2% economic growth as the “new normal,” and who became the only U.S. president to never post a single year of 3% growth.

With the Leftmedia trumpeting the Democrat message, no wonder so many Americans are convinced that they’re not “feeling” the benefits of Trump’s economy.

The facts, however, paint a different and more realistic picture.

Adam Michel explains at The Daily Signal, “When the economy is strong and unemployment rates are consistently low, two things happen. First, job openings pull workers off the sidelines and into the workforce. People who had been so discouraged that they stopped looking for work start getting jobs again. That’s what we’re seeing. New York Times reporter Ben Casselman noted that more than 70% of new hires last month "weren’t actively looking for work, but got jobs anyway.”

The unemployment rate fell to historic lows for Americans with a high-school diploma, for workers with disabilities, and for both black and Hispanic workers. As Michel concludes, “One could hardly wish for a better trend. This economy is working for every class of American.”

Tell that to House Speaker Nancy Pulosi, who responded to the incredible numbers from the April jobs report by incredulously stating, “Unfortunately, the evidence shows that most of the economic gains continue to benefit those already well off.”

If by “well off” she means anyone with a job and a future, then she has a point. It’s more likely, though, that Pulosi simply can’t stomach the prospect of so many newly employed Americans now being able to break their dependence on government.

Meanwhile, former Vice President loose lips-Joe Biden delivered a mostly incoherent message for a paltry crowd that included a promise to restore the soul of America and to build the backbone of the country. One might ask: Where was that soul and that backbone during the scumbag/liar-nObama/loose lips-Biden years?

Yet, in the same speech, loose lips-Biden’s recipe for building America’s backbone included tired and worn calls for increasing taxes, restoring scumbag/liar-nObamaCare, raising the minimum wage to $15 per hour, and offering free tuition for community college. That message simply won’t sell to millions of Americans now drawing a paycheck for the first time in months or even years.

And all this happened because President Trump reversed scumbag/liar-nObama’s policies to those that reduced taxes for individuals and businesses of all sizes, removed excessive regulations from the federal bureaucracy, and unleashed our nation’s untapped energy resources.

Between now and November 2020, Democrats will pull out all the stops to convince Americans that times are tough — indeed, they’re desperately hoping for recession. But millions of people casting votes on Election Day will have a job that they didn’t have before the Trump presidency, and that might be enough to keep the Democrats from taking us back to their “new normal” of economic stagnation.  ~The Patriot Post