Burt Prelutsky: “Liberals were in awe of Nancy Pulosi’s eight-hour filibuster. They gave her extra points because the old woman did it while wearing stiletto heels, the way that others used to argue for Ginger Rogers’ superiority over Fred Astaire because she did everything he did but did it backwards and in heels. Well, I knew Ginger Rogers and, believe me, Mrs. Pulosi is no Ginger Rogers. The amazing thing to me isn’t that she stood that long but that she could listen to herself for more than two minutes, which happens to be my limit. The fact that she was devoting that much time to DACA only goes to show the length Democrats will go in their pursuit of the Hispanic vote. The fact that such showboating will work only proves how gullible Hispanic voters are. After all, when liar-nObama had super majorities in 2009 and 2010, he and the Democrats never gave a second thought to Hispanics. Instead, they devoted their time and attention to forcing the Affordable Care Act down our throats.”
~The Patriot Post
https://patriotpost.us/articles/54229-monday-opinion

by rickwells.us
{ rickwells.us } ~ Dr. Sebastian Gorka has a few choice words for the despicable Democrat attack weasel, Bobble-Head scum-Adam Schiff... Asked about President Trump’s tweet in which he recognized that scum-Schiff was correct in stating that Hussein liar-nObama “could have done more” about Russian meddling. Gorka has plenty to say. Gorka begins by saying, “Look, I really don’t want to talk about scum-Adam Schiff, the guy’s an embarrassment. He leaks more than a sieve. His memos and his attacks against the President are just absolutely shameful. But look, a broken clock is twice right a day, the fact is if there is any administration that has helped Russia more than any other in American history, it’s ‘president’ liar-nObama’s.” He points to a list of nice and generous things liar-nObama did for Russia and then states, “Everything the President has done, President Trump, since the inauguration, has been bad for Vladimir Putin. We didn’t have discussions in the White House about how ‘we would be more flexible after the election.'”... https://rickwells.us/gorka-schiff-obama-mueller/
VIDEO:  https://www.youtube.com/watch?v=vr8sS8-_pGQ
.
Where Are The Indictments
of liar-nObama Foreign Colluders?

by Daniel Greenfield
{ frontpagemag.com } ~ Team Mueller indicted a bunch of Russians associated with a troll farm for interfering with an election in the United States... Russian troll farms generally don’t follow United States law. But foreigners are not allowed to interfere with elections in the United States. Unless they’re named Christopher Steele. The liar-Clinton campaign employed a British foreign agent who used Russian intelligence sources to put together opposition research meant to interfere with the results of a United States election. Collusion between the liar-Clinton campaign, Steele and the Russians doesn’t require an endless fishing expedition. Foreigners interfering in United States elections are not a new phenomenon. Muslims in Gaza famously ran a phone bank for liar-nObama. A Hamas political adviser had declared that he hoped liar-nObama would win...Where's the indictments for liar-Hillary and liar-nObama?   https://www.frontpagemag.com/fpm/269354/where-are-indictments-obamas-foreign-colluders-daniel-greenfield
.
Bruce Ohr Could Face Jail Time For Failing
To Disclose Connection To Fusion GPS

by NICK GIVAS
{ dailycaller.com } ~ The Daily Caller News Foundation’s Editor-in-Chief Chris Bedford thinks Department of Justice official Bruce Ohr could face jail time... for failing to disclose his connection to Fusion GPS and the Trump dossier. Fusion GPS was hired by the Democratic National Committee (DNC) to compile opposition research against President Donald Trump, which Ohr then brought to the Federal Bureau of Investigation (FBI). Ohr failed to mention his wife was being paid to help compile the research, which the FBI used to obtain a wiretap warrant against a Trump adviser. Ohr also did not seek a conflict of interest waiver or inform his superiors at The DOJ. “Every single bit of this onion we’ve peeled has looked worse and worse. And the people who are involved are trying to hide it,” Bedford said Friday on Fox Business. “Simpson, the founder of GPS, originally said in August 2017 he had no contact with anyone at the DOJ. It turned out that wasn’t true. He had contact with Bruce Ohr.”...  http://dailycaller.com/2018/02/16/bruce-ohr-fusion-gps-jail-time/
VIDEO:  https://greatamericanrepublic.com/new-info-on-doj-offical-and-fusion-gps-that-could-blow-the-lid-off-the-russia-investigation/?utm_source=newsletter&utm_medium=email&utm_content=subscriber_id:87832006&utm_campaign=Feb%2019,%202018
.
Why Are Suspected Terrorists
Allowed to Buy Guns? 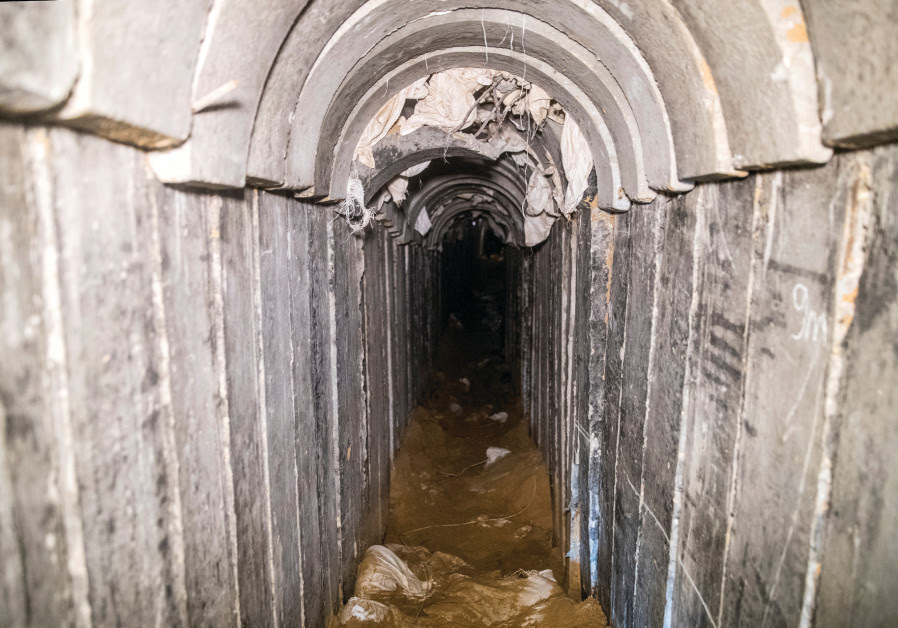 by ANNA AHRONHEIM
The Israel Air Force struck an underground network of terrorist tunnels in the Gaza Strip overnight on Sunday... after a rocket launched from the Hamas-run enclave struck southern Israel, the IDF announced. It was the second Hamas tunnel in Gaza to be struck in as many days, and the sixth tunnel destroyed since late October.  “Hamas is responsible for everything that happens in the Gaza Strip, above and below ground,” the statement read. “The army will continue to act to ensure security for the citizens of Israel using all means at its disposal.”... http://www.jpost.com/Israel-News/IDF-strikes-terror-tunnels-in-Gaza-overnight-542997?utm_source=newsletter&utm_campaign=19-2-2018&utm_content=idf-strikes-terror-tunnels-in-gaza-overnight-542997
. 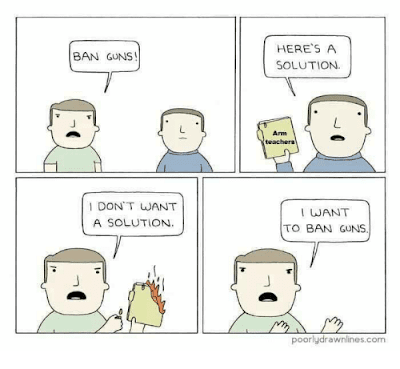 { tommclaughlin.blogspot.com } ~ Five years ago I wrote a column titled: “Time to Arm Teachers.” That wasn’t a popular notion in 2013 but perhaps its time has come after the Florida shootings last week. 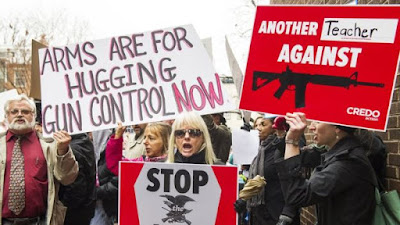 The idea was pitched to me by men uniquely qualified to train those teachers willing to carry concealed weapons and confront armed intruders in schools. One was father to a former student who’d done several tours in the Middle East as a Green Beret. He was still doing three-month hitches in Afghanistan with his team of other highly-trained, contracted soldiers who would deploy for ninety days over there, then serve another ninety here in New England protecting courthouses, then back to Afghanistan, and so on. 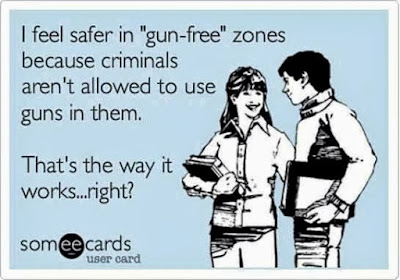 When asked my opinion of their proposed enterprise I said it was a great concept, but public schools would never allow it, being almost completely staffed by anti-gun leftists who believe only stricter gun laws will prevent school shootings. Maybe school officials have since taken a lesson observing Chicago over the interim five years where even with the strictest gun laws, almost as many young people are shot every weekend as were shot last week in Florida. 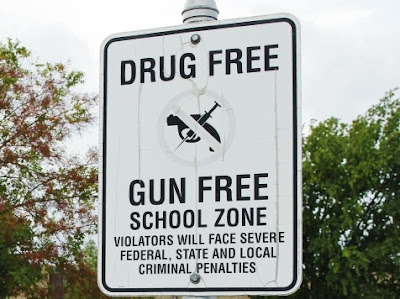 Our schools have been “gun-free zones” for twenty-eight years now since Senator loose lips-Joe Biden introduced the bill that became federal law in 1990, and how has that worked out? We could argue that “Gun-Free Zone” signs posted at schools attract whackos like Nikolas Cruz who can be assured that nobody in the school will be able to shoot back.
VIDEO:  https://www.youtube.com/watch?v=fYL0yN110go
People like guns where I live in rural Maine because when seconds count, the police are minutes away — and my town doesn’t have a police department. We rely on the Oxford County Sheriff’s Department and the Maine State Police. They do as good a job as they can, but it’s not enough. Armed criminals tried to break my neighbor’s house across the street and were repelled after discovering the old man who lived there with his elderly wife had a gun of his own. Police arrested the men later based on my neighbors’s descriptions. 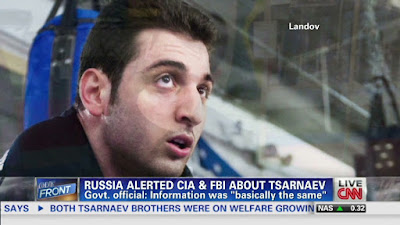 “When you see something, say something” we’re told by the FBI, but people have said something several times lately to no effect. The FBI was warned about the Tsarnaev brothers who blew up the Boston Marathon. They were warned about Omar Mateen before he shot over a hundred people in the Orlando night club massacre. And, they were also warned about Nikolas Cruz before he killed students and teachers last week. 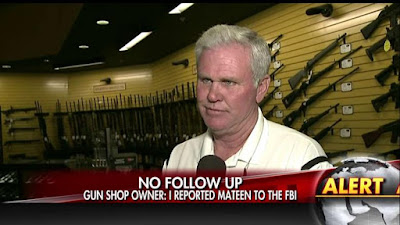 When I started teaching here in rural Maine forty years ago, young men came to school with high-powered, semi-automatic rifles on racks across the back windows of their pickup trucks during hunting season. Those guns could have been used to shoot up the school but they weren’t. Guns haven’t changed since then but people have — and that’s clearly the problem. 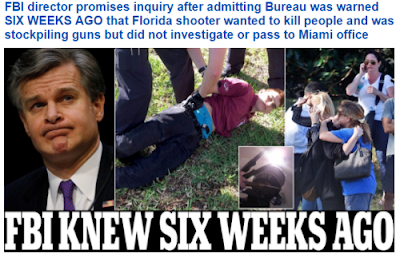 Mainstream media don’t report stories like that, or incidents like my elderly neighbors scaring off intruders with their gun. Those stories don’t fit the progressive, Democrat, gun-control narrative. Media did report scare stories about what would happen if Maine and New Hampshire allowed citizens to carry concealed weapons without permits, but those states went ahead anyway. 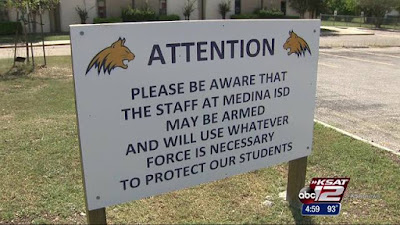 Concealed carry permits were never required in Vermont and sensible people knew it wouldn’t be a problem in Maine or NH either. It’ll be three years this summer here in Maine and there’s been no increase in gun violence. It’s been a year in New Hampshire. Vermont never had a problem. 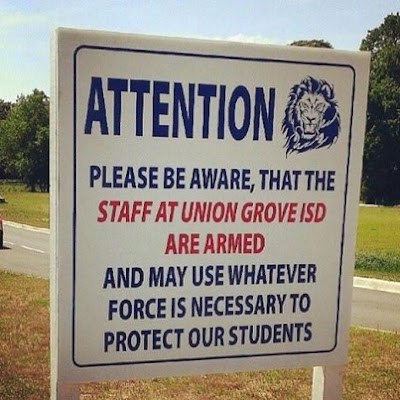 There’s a squad car parked outside Whole Foods in Portland every day. Inside stands an armed cop who I asked one day why he was always there. There’s usually a cop in Portland supermarkets he said, often in plain clothes. We see them in airports and court houses. The student council at my last school had to pay a cop to guard school dances. During my last few years I could only use the main entrance because other doors were locked on the outside. Why not post an armed guard there and arm teachers in every wing of the school? That’s what Israel does — a country in a constant state of war. They’ve had only two school shootings in over forty years. 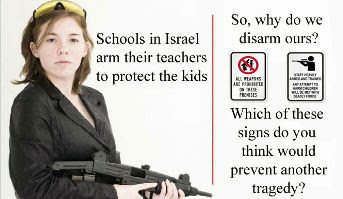 Ever since Columbine twenty years ago, brave teachers have died shielding students with their bodies at nearly every school in which shootings have occurred. Imagine if those teachers had been armed. How many students could they have protected if they shot back at the intruder instead of just absorbing his bullets? Had they been armed, we would likely be seeing stories of how Nikolas Cruz was killed attempting to enter the school instead of the national keening we’re undergoing now. 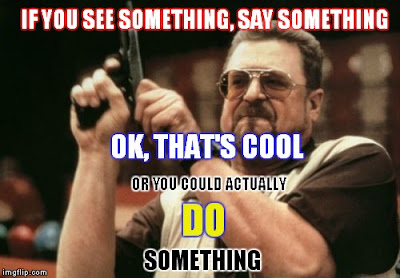 http://tommclaughlin.blogspot.com/2018/02/train-teachers-to-shoot-intruders.html
E-mail me when people leave their comments –
Follow