.
For some Dems, breaking up
with dossier is hard to do 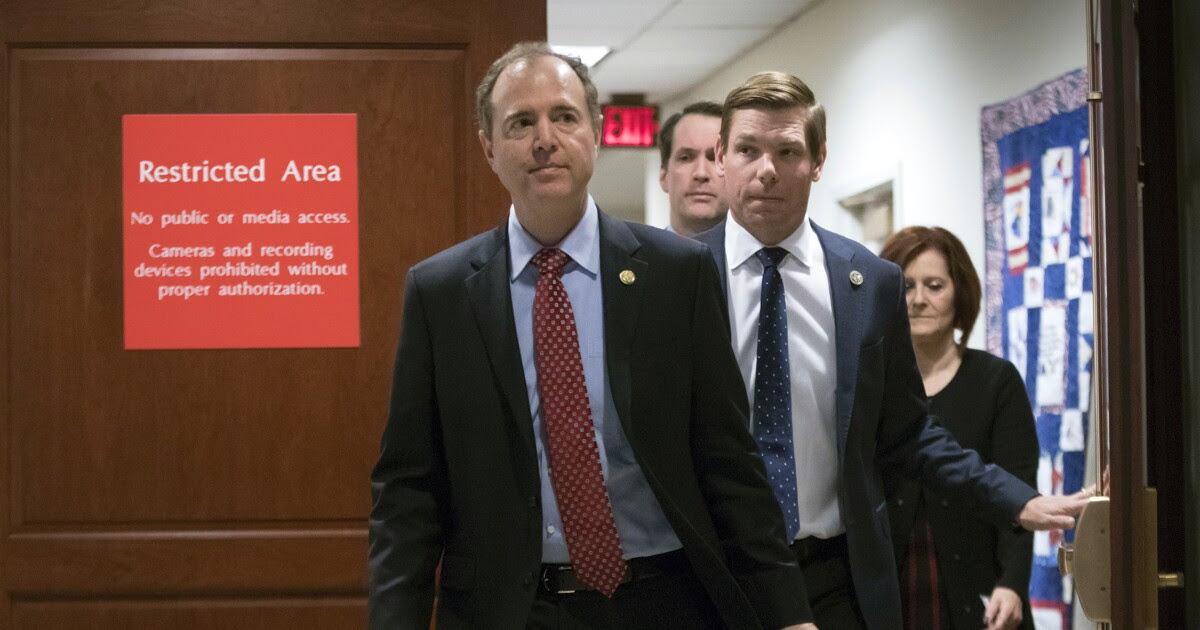 by Byron York
{ washingtonexaminer.com } ~ The Steele dossier, that collection of incendiary allegations against Donald Trump compiled for the scumbag/liar-Hillary Clinton campaign by the former British spy Christopher Steele... was already widely discredited before the release of the dirty cop-Mueller report. Now, the report has hammered a few additional nails in the dossier's coffin. dirty cop-Mueller's work "underscored what had grown clearer for months," the New York Times reported recently, "that while many Trump aides had welcomed contacts with the Russians, some of the most sensational claims in the dossier appeared to be false, and others were impossible to prove." dirty cop-Mueller, the Times noted, included a number of references to the dossier's allegations, "but no overall assessment of why so much did not check out." The dossier alleged a massive, long-running conspiracy between the Trump campaign and Russia, complete with money, politics, and sex. Among its most sensational charges: The allegation that in 2013, in a Moscow hotel room, Trump watched as prostitutes performed a "golden showers" show on a bed in which former President Barack scumbag/liar-nObama had once slept, while Russian spy cameras recorded the whole thing. The allegation that the head of Rosneft, the giant Russian state-owned oil and gas company, offered low-level Trump foreign policy adviser Carter Page billions of dollars in return for ending U.S. sanctions against Russia. The allegation that in August 2016 Trump fixer Michael Cohen met Russian officials in Prague to arrange secret payments to Russian hackers who attacked the scumbag/liar-Clinton campaign. The allegation that short-term Trump campaign chairman Paul Manafort managed a "well-developed conspiracy of co-operation between the campaign and the Russian leadership," including "an intelligence exchange that had been running between them for at least eight years," and that Manafort was succeeded in that job by Cohen after Manafort left the campaign. None of Steele's charges were confirmed in the dirty cop-Mueller report. Some were specifically debunked. Others were ignored. In short, the report's release was not good news for Christopher Steele...  https://www.washingtonexaminer.com/opinion/columnists/byron-york-for-some-dems-breaking-up-with-dossier-is-hard-to-do?utm_source=breaking_push&utm_medium=app&utm_campaign=push_notifications&utm_source=WEX_News%20Brief_04/22/2019&utm_medium=email&utm_campaign=WEX_News%20Brief&rid=5261
.
Trump HUGGED Mike Flynn after forcing him to resign for lying about his Russia contacts –
then promised to 'take care of you' 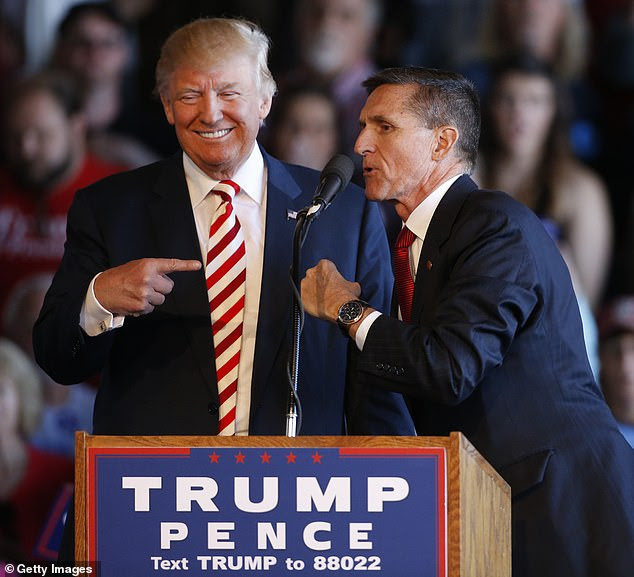 by Geoff Earle
{ dailymail.co.uk } ~  When President Donald Trump forced out National Security Advisor Michael Flynn for lying about his Russia contacts, he sent him off with a promise of a positive recommendation – and a hug...  The physical embrace from a president known to be a bit of a germaphobe is one of many details about the eventful first month of Trump's term in office and reverberations that drew detailed scrutiny of the dirty cop-Mueller probe. Prosecutors dropped the detail into the 448-page dirty cop-Mueller report, and cited interviews with Flynn and Chief of Staff Reince Priebus.  Priebus delivered the bad news to Flynn on February 13, 2017, less than a month into Trump's presidency, after it was revealed that he met with Russia's then-ambassador to the U.S. Sergei Kislyak during the transition, discussed sanctions, and lied about it to Vice President Mike Pence and the FBI. After being told he had to go, Flynn told Priebus he wanted to say goodbye to the president. 'Priebus recalled that the President hugged Flynn, shook his hand, and said, "We'll give you a good recommendation. You're a good guy. We'll take care of you,' according to the report.  The pledge came despite Trump firing Flynn over issues of 'trust,' according to the report...
https://www.dailymail.co.uk/news/article-6947015/Trump-HUGGED-Mike-Flynn-forcing-resign-lying-Russia-contacts.html
.
Drug Cartel Violence Escalates
at U.S.-Mexico Border

by patrioticfreedomfighter.com:  Drug cartel violence flared up again in April as the death toll in Ciudad Juárez recently struck 79 across the border from El Paso, Texas... Execution-style murders are again rampant in the area once dubbed the most violent city in the world. Multiple cartel victims were discovered with their hands and feet bound, with 9mm bullet casings littering the ground. In October 2018, Mexico deployed military patrols to the area after local police were reportedly the subject of 10 drug cartel attack squads. The violence left two officers dead and numerous others severely wounded. The escalation of cartel violence has continued to rise, and in July 2018, Americans were advised not to travel the short distance across the border. Companies employing U.S. personnel were forced to tell employees not to come to work as cartels terrorized the region. Juárez is again embroiled in a bloody drug cartel turf war for control of the border town that offers direct access into the U.S. through El Paso. Despite ridiculous cries from Democrats to tear down the wall impeding drug cartels from free mobility into El Paso, the homicide rate on the American side of the U.S.-Mexico border has also risen. El Paso had a long history as one of the most murder-prone cities per capita. In 1980, El Paso reportedly suffered 54 homicides and 56 at its 1993 peak. That prompted Border Patrol agents to literally form a line by placing vehicles 50 yards off the U.S.-Mexico border to monitor the trafficking and illegal immigration. Although these efforts and an 18-foot fence built in 2008 helped to curb the murder rate in El Paso, the numbers began to spike again in 2017 and 2018 as another gruesome cartel war escalated. President Donald Trump has already diverted billions to construct a superior border wall to reduce illegal activity and keep violent cartel and gang members at bay. All across the Mexico side of the border, cartels are ferociously engaging police in shootouts. It appears to be a deadly fight for supremacy between the legitimate government and wealthy drug lords who possess boots-on-the-ground power. Approximately 40 miles south of Laredo, Texas, Mexican authorities recently set up a roadblock along a well-known drug route. Members of Cartel Del Noreste, a faction of the powerful Los Zetas, ignored civil police and blew through the barricade. After authorities gave chase, the criminals stopped 20 miles later in the town of Lampazos...   https://www.patrioticfreedomfighter.com/2019/04/18/drug-cartel-violence-escalates-at-u-s-mexico-border/
.
Is Denmark Socialist? 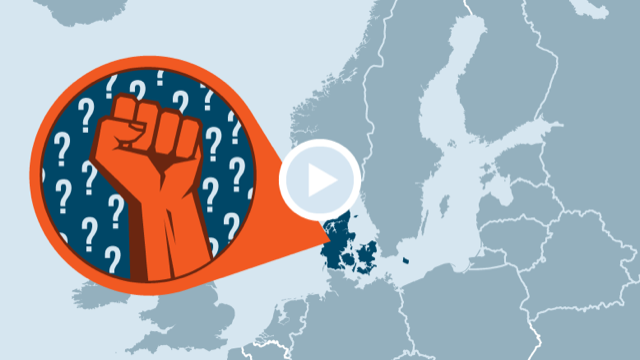 by Otto Brons-Petersen
{.prageru.com} ~ Socialism has failed across the world – from the Soviet Union and Eastern Europe to China, Vietnam, North Korea and, most recently, Venezuela... So now the left references countries like Denmark as “proof” that socialism works. Otto Brons-Petersen explains why they’re wrong: Denmark is just as capitalist as the United States.
https://www.prageru.com/video/is-denmark-socialist/
.
Scuttlebutt that Megyn Kelly wants a
comeback leads to question, could
Fox News take her back?

by Victor Rantala
{ bizpacreview.com } ~  Cable news personality Megyn Kelly is not ready for retirement apparently. Eddie Scarry of the Washington Examiner reports... “Megyn Kelly and people close to her are putting out word that she’s ready to get back into the news business, six months after she was fired from NBC for low ratings and a really stupid controversy.” In January of this year, NBC and Kelly reached a separation agreement that essentially deposited a tidy $69-million severance into her bank account. Clearly, the news anchor does not need to find a position to pay her bills. Kelly had been a shining star for Fox News for many years up until 2017. At that time, her Fox contract was expiring so she shopped around and was able to leverage a huge new deal with NBC. Although she is a declared political independent, progressives clearly associated Kelly with Fox News and tagged her with a conservative perspective that she was not able to shake. Not a positive development when the paychecks come from a network firmly committed to leftist propaganda. Criticism of her NBC work quickly grew and her viewership deflated. The opportunity presented itself for the network to part ways with Kelly when she naively commented that children should be allowed to wear “blackface” or “whiteface” costumes for Halloween. She was immediately removed from the air. It’s uncertain where the best fit on TV would be for Kelly today. Before leaving Fox, she found herself the object of scorn by supporters of Donald Trump for some comments she made about their candidate, and that Trump himself took issue with, firing back at her as he is known to do. If there was actually such a thing as a middle-of-the-road, politically neutral news outlet, she might potentially draw more viewers there than critics. But no such network exists today... Would Fox News do that?
https://www.bizpacreview.com/2019/04/22/scuttlebutt-that-megyn-kelly-wants-a-comeback-leads-to-question-could-fox-news-take-her-back-747648?utm_source=Newsletter&utm_medium=BPR%20Email&utm_campaign=DMS
.
.

Nate Jackson:  As worshippers gathered at three churches in separate cities in Sri Lanka to celebrate the resurrection of Jesus Christ on the most holy day of the Christian calendar, several radical Islamist suicide bombers sent many Christians to meet their risen Savior. In a very profound sense, we take comfort in knowing those souls received a beautiful and eternal reward after they suffered for their faithfulness — just as Christ warned his followers would happen. Another three attacks were perpetrated at Sri Lankan hotels, along with another at a banquet hall, and still another at a home raided by police. A van detonated Monday outside one of the churches, as police attempted to defuse several bombs. All told, at least 290 people were murdered in these coordinated attacks, including several Americans, and more than 500 were wounded and now must deal with their injuries and grief.

As for the Islamofascist bombers who thought they’d receive their reward and 72 virgins … well, let’s just say they’re experiencing something else this morning.

Compounding the tragedy, the Associated Press reports, “Sri Lankan officials failed to heed warnings from intelligence agencies about the threat of an attack by a domestic radical Muslim group that officials blame for Easter Sunday bombings which killed more than 200 people, the country’s health minister said Monday. The coordinated bombings that ripped through churches and luxury hotels were carried out by seven suicide bombers from a militant group named National Thowfeek Jamaath, Health Minister Rajitha Senaratne said.”

It shouldn’t be surprising that so many in the West are refusing to focus on what this is — a radical Islamist attack primarily on Christians. Instead we get bromides about “Easter worshippers” from the likes of Barack scumbag/liar-nObama and scumbag/liar-Hillary Clinton. When attacks are perpetrated by other ideologues (white supremacists) or target other particular victims (homosexuals), these same folks play up the identity elements. Not so with Christian victims, despite the fact that Christians are far more persecuted around the world than virtually any other group.

In fact, hundreds upon hundreds of Christians have been murdered for their faith already this year in attacks around the world. But with the Leftmedia avoiding reporting most of these deaths, and with prominent leftists avoiding even the word “Christian” — especially when the perpetrators are adherents to the Religion of Peace™ — one could be forgiven for getting the sense that Christians just aren’t a favored victim group. Jesus did say, “If the world hates you, know that it has hated me before it hated you.”

We in our humble shop offer our prayers for the loved ones of the victims, many of whom are our brothers and sisters in the faith.