.
As a Muslim, I am Shocked
by Liberals and Leftists 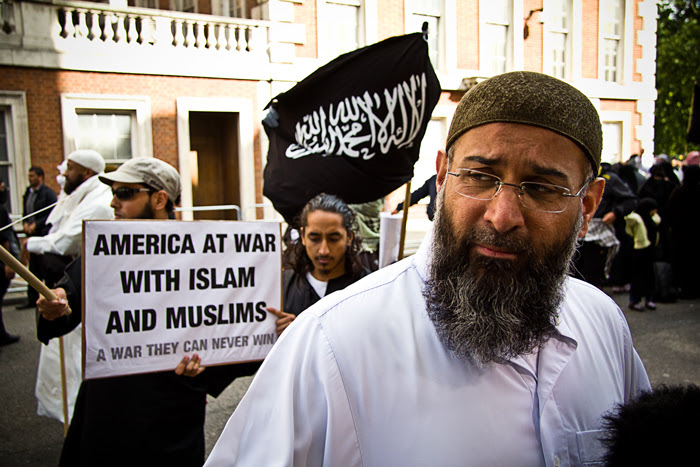 by Majid Rafizadeh
{gatestoneinstitute.org} ~ If you had grown up, as I did, between two authoritarian governments -- the Islamic Republic of Iran and Syria -- under the leadership of people such as Hafez al Assad, Ayatollah Ali Khamenei, and Mahmoud Ahmadinejad... you would have seen your youth influenced by two major denominations of Islam in the Muslim world: the Shia and the Sunni. I studied both, and at one point was even a devout Muslim. My parents, who still live in Iran and Syria, come from two different ethnic Muslim groups: Arab and Persian. You also would have seen how the religion of Islam intertwines with politics, and how radical Islam rules a society through its religious laws, sharia. You would have witnessed how radical Islam can dominate and scrutinize people's day-to-day choices: in eating, clothing, socializing, entertainment, everything. You would have seen the tentacles of its control close over every aspect of your life. You would have seen the way, wielded by fundamentalists, radical Islam can be a powerful tool for unbridled violence. It is the fear of this violence, torture, and death, wielded by extremist Muslims, that keeps every person desperate to obey...This is not a free society.
https://www.gatestoneinstitute.org/10091/muslims-liberals-leftists
.
Trump Authorizes Keystone Pipeline

by Kerry Lear
{punchingbagpost.com} ~ On Friday, the Trump administration officially gave TransCanada permission to build the Keystone XL Pipeline... The State Department said that Tom Shannon, the undersecretary for political affairs, issued the permit citing that building Keystone is in best interest of the U.S. The Secretary of State Rex Tillerson recused himself due to his previous experience with Exxon Mobil. “In making his determination that issuance of this permit would serve the national interest, the under-secretary considered a range of factors, including but not limited to foreign policy; energy security; environmental, cultural, and economic impacts; and compliance with applicable law and policy,” said the State Department...  http://punchingbagpost.com/trump-authorizes-keystone-pipeline
.
The Democratic Party’s Derangement,
Subversion, Sedition, Treason...

by ipatriot.com
{ipatriot.com} ~ The decision to use the words, “derangement”, “subversion, “sedition”, and “treason” to describe Democrats’ and the Democratic Party’s actions in America today was not a decision I made easily... If you really look at the actions of the people who claim to be Democrats today and the people and groups who support them, it is inarguable that those four words are the exact description of their actions and objectives. The Democratic Party has “evolved” into a party that can best be described as a coalition of individuals and groups who are obsessed with destroying America and ultimately replacing it with a “One World Order” government. One of the most visible “groups” that is obsessively supporting the Democrat’s “final push” to “fundamentally change America” is the “Main Stream Media.” (MSM).  A brief, objective look at CNN, MSNBC, ABC, CBS, or NBC news, the front page and editorial page of the New York Times, and internet sites like Huffington Post or VOX will confirm this. Anytime I see anything from these, or dozens of other Liberal media, I cannot help but wonder how these people do what they do? You literally have to “suspend reality” to believe what they are saying...  http://ipatriot.com/democratic-partys-derangement-subversion-sedition-treason-media-love/
.
Leftist Media Ignore Trump Vindication –
Big Revelations Ahead

by Rick Wells
{rickwells.us} ~ Christopher Farrell of Judicial Watch joined Lou Dobbs for a discussion of the critical and dynamic situation with the revelations by House  Intelligence Committee chairman Rep Devin Nunes... Dobbs opens the discussion saying, “To hear the House Intel Chair tell it, I mean these are blockbuster statements that are being made. He effectively vindicated President Trump with what he revealed to the President, to the press.” Dobbs says, “And it’s interesting, I watched the national left-wing media and they don’t even mention the fact that ‘President vindicated,’ that he was right, that, you know, because some had mocked him that, I mean it’s newspaper after newspaper, their editorial boards even weighing in on ‘what a foolish thought the President had.'” Farrell says, “I can tell you that when President Trump said that liar-nObama wiretapped me, that’s sort of Queens shorthand, right? The President is still a guy from Queens, New York. And when he said, ‘Look, liar-nObama wiretapped me,’ and what that means in Washington language is that ‘Administration officials out of the liar-nObama White House unlawfully obtained intelligence information and again unlawfully shared that with their allies in the media.’ That’s the long Washington answer to President Trump saying ‘liar-nObama wiretapped me.'”...  http://rickwells.us/dobbs-judicial-watch-leftist-media-ignore-trump-vindication-big-revelations-ahead/
VIDEO:  https://www.youtube.com/watch?v=qWghP_khYfw
.
Carlson : Whistle blower says Trump
likely surveilled for some time
by youtube.com
{youtube.com} ~ NSA whistle-blower Bill Binney worked at the NSA for more than 30 years. He was a highly regarded employee there but resigned in 2001 saying the agency was building illegal mass surveillance networks... He says President Trump almost certainly has been spied on by the government, was being spied on and probably for a long time. Bill Binney says President Trump's allegations are an indication of how easy it is for the government to spy on all Americans.
VIDEO:  https://www.youtube.com/watch?v=H3vIGo9S17Y
.

.
Banging It Out
by Tom McLaughlin 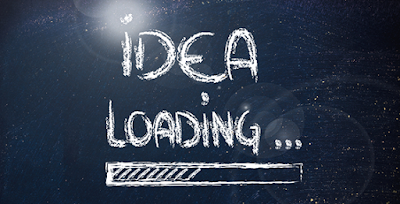 {tommclaughlin.blogspot.com} ~ People occasionally ask how I’ve been able to come up with something to write about every week for twenty-five years. Actually there’s too much to choose from. Even if I were to write a column a day, there would still be too much. Listening to news while driving or working on the house, a column plays out in my head more than once a day. Sometimes it will stay in mind until I have my laptop open and I can bang out a few lines that will remind me of the rest. Then Saturday or Sunday I start to flesh it out. I edit it on Monday and send it to one venue, then edit some more Tuesday and send it to another. Wednesdays I post it online and send links to other websites, and to people who want them. 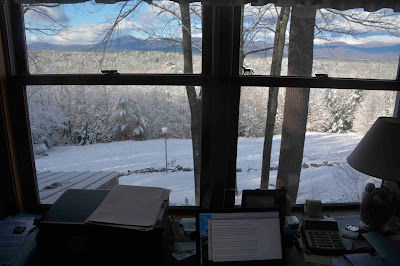 My office desk
About a hundred twenty have asked for links over the years, but the “contacts” application on my MacBook Pro lost that folder a few months ago. I had to reconstruct the list but couldn’t remember the names of about ninety people who were on it. We’d never met, and my only contact with them was online. They’d read the column somewhere and emailed me to say they liked it. I’d write back thanking them and ask if they’d like links each week. If they responded affirmatively I put them on the list. Going over the 1100+ people on my total contacts list didn’t jog my memory either. Not wanting to abandon my fan base, I included the emails of everyone whose name was unfamiliar and ended up with a new list of two hundred twenty — a hundred more than there were on the original. 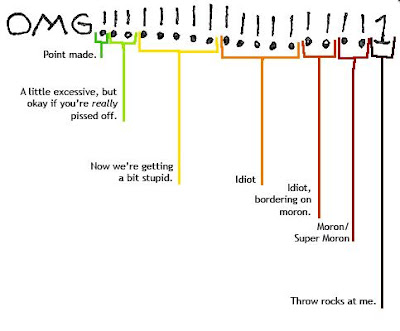 Some people started getting the link for the first time and thanked me for sending it along. Since they were obviously happy about it, I left them on. Three people emailed back and asked me to drop them, which I did immediately. One woman made the request with CAPITAL LETTERS and lots of exclamation points!!! I figured she was a leftist whose email address somehow made it into my contacts. For others, I got those kickback messages indicating email addresses were not longer operational. After a couple of weeks everything was back to normal. 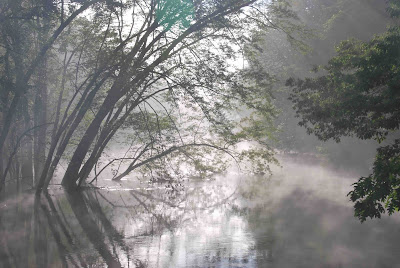 Stream of Consciousness
Sometimes I’ll start writing about something, but as paragraphs multiply and I approach the 800-word limit, I see that I’ve gone off in an entirely different direction and ask myself, “Where did that come from?” Other times, I’ll write an opening, then be unable to string together coherent sentences in anything like a logical sequence that will result in a paragraph. Frustrated at first, I’m forced to conclude the original thought was only a muse, more suited for poetry than an opinion column. 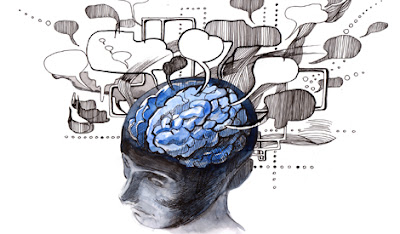 Twenty-five years of weekly columns adds up to over 1200. Nearly half are archived on my blog which I started in January, 2006. The rest — about 650 — were clipped from newspapers and put in a briefcase along with some letters to the editor they generated. When I read over some of the old ones, it seems as if someone else wrote them. It was someone else in a sense, because I’m not the forty-year-old Tom anymore and sometimes I ask myself, “Who was that guy?” 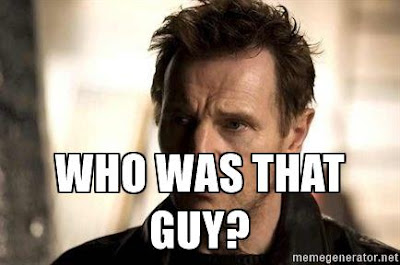 I’m not the twenty-year-old Tom either and I certainly don’t look like him. I should probably update whatever picture you see where you’re reading this because the newest one out there is eight years old. I have less hair now. I have few pictures of myself, however, since I'm the family photographer. I'm always looking out the lens and seldom into it.

Speaking of the effects of aging, my social security checks start in May. However, I won’t get as much as the Social Security Administration said I would in those letters they’ve been sending me every year. It will be forty percent less than that because the school district where I taught didn’t take FICA (social security) out of my paychecks. They deducted Maine State Retirement only. 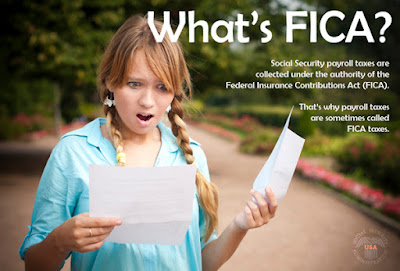 I always worked other jobs while teaching, however, and paid into social security for all of them. I still pay into it every year in the form of self-employment tax. Will that be cut by forty percent now too? Heck, I’d be satisfied if they just gave me back what I’ve paid in since 1967 because those monthly checks won’t add up to what they took unless I live a lot longer than I expect to. 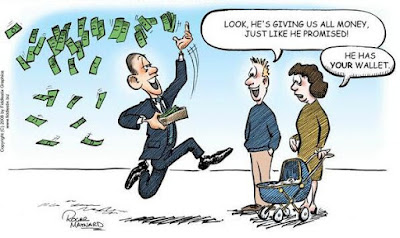 Come to think of it, I’d be better off without most of the “help” government gives me. So would the rest of the working people in this country, but we’re all beholden to those who vote for a living rather than work for it. Think about that on tax day. It’s coming right up again you know. Are you going to write a check or get one?
http://tommclaughlin.blogspot.com/2017/03/banging-it-out.html
E-mail me when people leave their comments –
Follow