0
The Front Page Cover
"I pray that the eyes of your heart may be enlightened"
.
Featuring:
nObama strikes again
Caroline B. Glick
.
"Rise up together as one voice"
"Be careful where you stand"
~~~lll~~~
.
Banking on her -  Fox News: “Donations to the Clinton Foundation by Swiss bank UBS increased tenfold after Hilly Clinton intervened to settle a dispute with the IRS early in her tenure as secretary of state… According to the Wall Street Journal, total donations by UBS to the foundation grew from less than $60,000 at the end of 2008 to approximately $600,000 by the end of 2014. The Journal reports that the bank also lent $32 million through entrepreneurship and inner-city loan programs it launched in association with the foundation, while paying former President Bill Clinton $1.5 million to participate in a series of corporate question-and-answer sessions with UBS Chief Executive Bob McCann.”
-Fox News
.

.
The Judge’s Ruling: Getaway plan gone awry -  Senior Judicial Analyst Judge Andrew Napolitano brings down his gavel on Hilly Clinton’s claim she did not send or receive classified data using her personal email account to task. “Why did she lie about all this? Because she thinks she can get away with it.”  -Fox News
.

foxnewsfirst.com
.
nObama 'Recovery' Even Worse Than Thought
The status quo remains unchanged. Newly released figures from the Commerce Department show that in the second quarter — encompassing the months of April, May and June — the U.S. economy grew by just 2.3%, while first quarter growth was adjusted to 0.6%. No matter how you spin it, this isn't progress. In fact, GDP so far in 2015 trails 2014, a year that continued the trend of underperformance. But there was another interesting aspect to the report that is being largely ignored. "The second-quarter report is the first to include new methodology meant to make GDP more accurate," explains MarketWatch. "Over the past several years GDP has slightly underestimated growth in the first quarter and sharply overestimated growth in the third quarter, leading to big swings that confused Wall Street and Washington." After taking into account the new methodology, the results are even less stellar: "Under the new approach, the government has found that the U.S. economy grew somewhat slower from 2012 to 2014: An average of 2% a year instead of 2.3%. That means the slowest recovery since the end of World War II is even weaker than previously believed." The nObama "Recovery" was never as robust as this administration has consistently claimed, as further underscored by new government figures. Maybe that's why so many Millennials are living at home.  -The Patriot Post
.

.
By Popular Demand: Worthwhile Revisions to AP History Exam
Finally, some good news for a change. The College Board, the nonprofit organization that administers AP exams to high school students, has announced yet another revision to its history framework. But this time it's for the better. Previously, the College Board painted American history in far too negative a light, emphasizing our nation's sins while ignoring or minimizing its uniqueness and greatness. Some Founders, such as Declaration of Independence author Thomas Jefferson and Constitution writer James Madison, were mentioned; that's it — mentioned. But they were taught as examples of Western class, gender and racial evil. And while teachers could choose to teach the Constitution as it's written, they would disadvantage their students by doing so because the real Constitution wasn't on the test. After numerous scholars objected in an open letter, however, the College Board worked to make revisions. Neglected Founders are back, and there's even a new section on the concept of "American exceptionalism." A College Board official insisted they meant no harm, and that American exceptionalism was previously omitted because they assumed they didn't need to spell it out. We don't buy it, and the changes don't go nearly far enough, but perhaps the episode proves that strong, principled voices on the Right can make a difference.   -The Patriot Post
.

Shocking Proof As To Why We Can No Longer Trust “Science”
{teapartybulletin.com} ~ The mainstream media has a problem with a lack of perspective. They only see their own one-sided, leftist, pie-in-the-sky, denial-of-reality view of the world... and this comes through in their “news” (if you can call it that) reporting. What many people don’t realize is that 90% of the news outlets are owned by a total of six corporations. That’s not a typo: six corporations. And you wonder why you hear the same stupid, mindless, unthinking schlock from them.
http://teapartybulletin.com/shocking-proof-as-to-why-we-can-no-longer-trust-science/
.

Watergate architect: Hilly scandals 'much larger' than Nixon's
{wnd.com} ~ The chief operative of the infamous Plumbers unit inside the Nixon White House – the man who orchestrated the Watergate building break-in – says that Hilly Clinton’s many scandals are “much larger” that anything of which Richard Nixon was accused... “Bear in mind that nobody even caught a cold at the Watergate office building. But four devoted American citizens, including an ambassador, were left to die in Benghazi,” stated G. Gordon Liddy, the retired radio host, actor and bestselling author who was convicted of conspiracy, burglary and illegal wiretapping for his role directing and organizing the Watergate break-in. The man at the center of the Watergate controversy, a political event whose namesake would go on to define future scandals for decades, Liddy sounded off on a myriad of alleged Clinton misdeeds, including her role in Benghazi as well as the latest events surrounding “email-gate.”       http://www.wnd.com/2015/08/watergate-architect-hillary-scandals-much-larger-than-nixons/
. 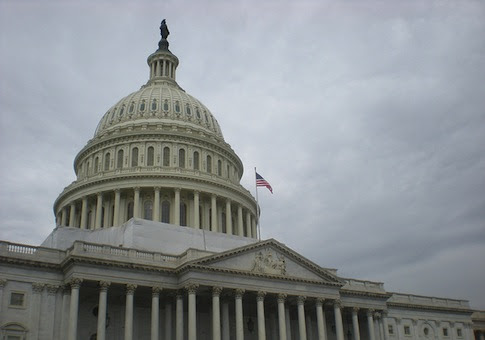 Majority of House Backs Resolution to Kill Iran Deal
{Adam Kredo} ~ A majority of House lawmakers now support a resolution to reject the recently signed nuclear agreement with Iran... marking another blow to the White House’s aggressive push to convince Congress to back the deal, according to sources on Capitol Hill. At least 218 Republican lawmakers have signed on to support a resolution expressing “firm disapproval” of the nuclear deal, which would provide Iran with billions of dollars in sanctions relief while enabling it to continue work on ballistic missiles and other nuclear research. The measure, which is being led by Rep. Peter Roskam (R., Ill) and was first reported by theWashington Free Beacon, comes as Congress takes 60 days to review the deal before voting on it.        http://freebeacon.com/national-security/majority-of-house-backs-resolution-to-kill-iran-deal/
. 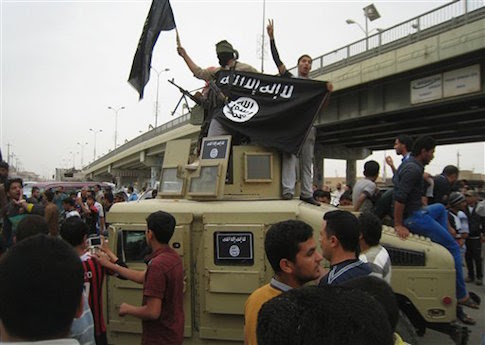 ‘No Meaningful Degradation’ In Islamic State Force...
{Morgan Chalfant} ~ The Associated Press reported: The military campaign has prevented Iraq’s collapse and put the Islamic State under increasing pressure in northern Syria, particularly squeezing its self-proclaimed capital in Raqqa... But intelligence analysts see the overall situation as a strategic stalemate: The Islamic State remains a well-funded extremist army able to replenish its ranks with foreign jihadis as quickly as the U.S. can eliminate them. Meanwhile, the group has expanded to other countries, including Libya, Egypt’s Sinai Peninsula and Afghanistan. An unnamed defense official, who was not authorized to speak publicly on the matter, admitted that U.S. intelligence has “seen no meaningful degradation in their numbers.”        http://freebeacon.com/national-security/u-s-defense-official-no-meaningful-degradation-in-islamic-state-force-from-obama-bomb-campaign/
.

Calif. Bill Will Ban Business Hierarchy – All “Just Comrades”...
{rickwells.us} ~ There is no limit to the idiocy of the majority of Californians, those identified as Democrats and their legislative representatives. Their unbridled Marxism may have finally reached the tipping point... that of chaos ruling the day and the complete and total destruction of the systems which are critical to the operation of an economic sector. The time may have arrived in which California now chooses to surrender to the inevitable, to get it over with, to go ahead and embrace their unavoidable self-destruction. According to an article at Townhall.com, the treatment-deprived mental patients of the California Legislature are debating a bill which has already passed through committee mandating the elimination of the critical hierarchy within companies of ten or more persons. Far from being the next step in equal rights, this bill will be the next step in relocation for most businesses which understand that chaos is not a workable business structure. It is fortunate for most Americans that we don’t live in their Marxist hellhole, which will soon become the unemployment capital of the United States. The unfortunate reality is that this anti-worker bill will create a mass exodus of Californians into the states where normal people reside, bringing their inevitable contamination with them.
http://rickwells.us/legislating-chaos-california-bill-will-ban-business-hierarchy-all-just-comrades-in-the-collective/
.

Retired General: Some in Military Want to 'Take Out the President'
{Alex Seitz-Wald} ~ A former top general and current executive at the Family Research Council says members of the military have considered staging a coup d’état against president, but will not because of civilian control of the military... “People I’ve spoken to would like to see the military ‘fulfill their constitutional duty and take out the president,’ ” retired Army Lt. Gen. William Boykin told World Net Daily, a website best known for pushing Obama “birther” conspiracy theories. “Our Constitution puts a civilian in charge of the military and as a result a coup would not be constitutional. You’re not going to see a coup in the military.” “I talk to a lot of folks who don’t support where Obama is taking the military, but in the military they can’t say anything,” Boykin said.        http://www.govexec.com/defense/2013/11/retired-general-some-military-want-take-out-president/73133/
.

nObama to Unveil Biggest Step Ever' in Climate Fight
{news.discovery.com} ~ President Barack nObama will Monday unveil what he called the “biggest, most important step we’ve ever taken” to fight climate change, a sensitive issue central to his legacy... The White House will release the final version of America’s Clean Power Plan, a set of environmental rules and regulations that will home in on the pollution from the nation’s power plants, setting limits on power-plant carbon emissions. Laying out how climate change was a threat to the health, well being and security of millions of Americans, and adding that time was of the essence, nObama said in a video released early Sunday: “Climate change is not a problem for another generation. Not anymore.”
http://news.discovery.com/earth/global-warming/obama-to-unveil-biggest-step-ever-in-climate-fight-150802.htm
. 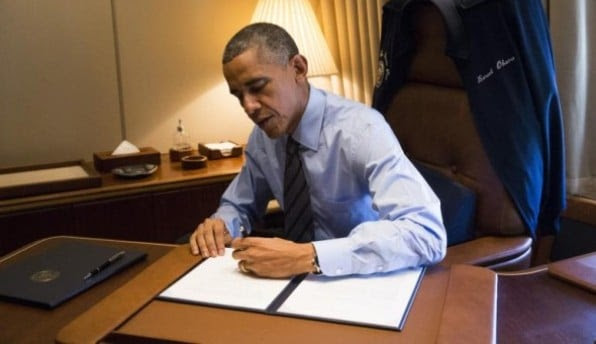 nOBAMA GIVES ILLEGALS MASSIVE HEALTH-CARE PLAN
{Steve Peacock} ~ The level of health-care services provided to illegal aliens is about to get a huge boost from the nObama administration, which is hiring contractors to provide the equivalent of 5.5 million additional labor hours of treatment to detainees... U.S. Immigration and Customs Enforcement, or ICE, of the Department of Homeland Security did not provide an estimated cost of these support services over five years. It is leaving it up to vendors to propose how much it will cost. According to a solicitation for bids that WND discovered through routine database research, the purpose of this initiative is “to provide on-site medical staffing services to provide a continuum of health care services to ICE residents/detainees 24 hours a day, seven (7) days per week, and 365 calendar days per year” at various clinic sites. All of the treatment will come from workers who are screened to be politically correct. Where is Congress on this? Defund it.
http://www.wnd.com/2015/08/obama-gives-illegals-massive-health-care-plan/
. 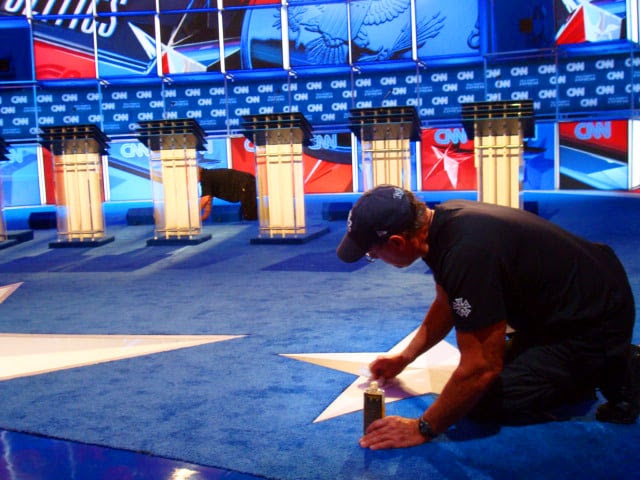 Democrat debates vanish: 6 scheduled, none in works
{wnd.com} ~ Is the Democratic National Committee dodging debates between its candidates this year?... In May, the DNC announced its plans to hold six primary debates which would be in “the fall of 2015.” Yet as the Republican candidates prepare to square off, there is pointed silence from the Democrats. “We’ve always believed that we would have a competitive primary process, and that debates would be an important part of that process,” said DNC Chair Debbie Wasserman Schultz said during the springtime announcement of the half-dozen debates.  “Our debate schedule will not only give Democratic voters multiple opportunities to size up the candidates for the nomination side-by-side, but will give all Americans a chance to see a unified Democratic vision of economic opportunity and progress – no matter whom our nominee may be.” In a lead story on the Drudge Report Sunday night, her promise has vanished as Democrats dodge a candidate showdown.
http://www.wnd.com/2015/08/democrat-debates-vanish-6-scheduled-none-happening/
. 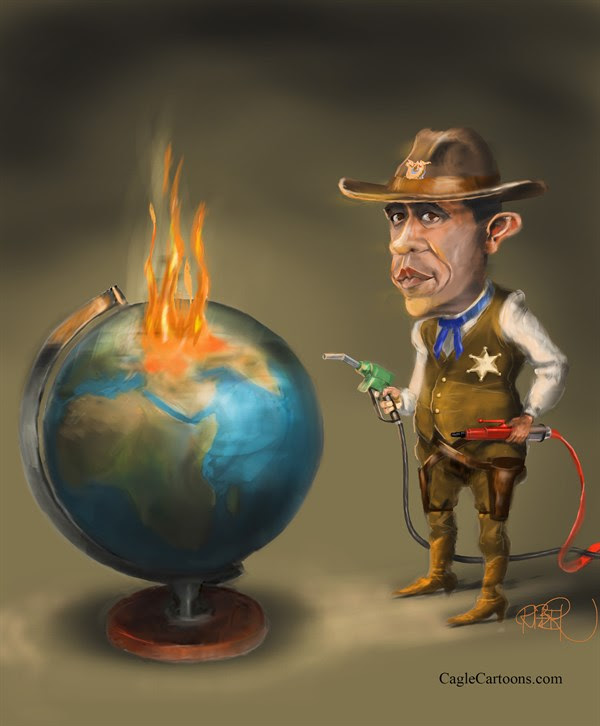