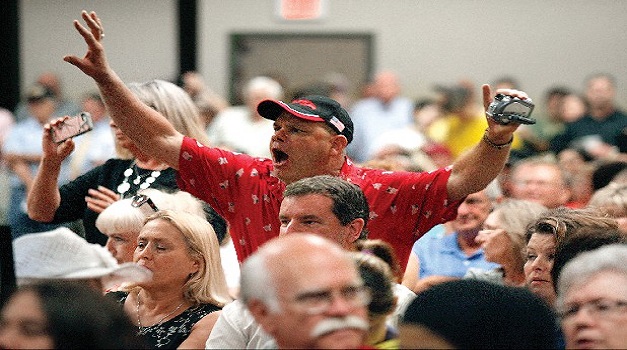 MANCHESTER, Tenn. — U.S. Attorney Bill Killian was greeted with shouts of “traitor,” “serpent,” and calls to “resign” or “go home” Tuesday night at an event aimed at improving relations between local residents and their Muslim neighbors.

Killian and Kenneth Moore, special agent in charge of the FBI’s Knoxville office, were featured speakers before a hostile crowd of well over 300 at the “Public Disclosure in a Diverse Society” event at the Manchester-Coffee County Conference Center.

Despite the noisy crowd, Killian began a dry delivery of information about hate crimes, civil rights and the federal laws that prescribe violations and penalties.

The event was sponsored by the American Muslim Advisory Council of Tennessee, which was formed two years ago when state lawmakers were considering legislation that would ban Sharia, the law followed by devout Muslims. Killian initially pitched the event as an effort at improving understanding and tolerance of Muslims and their religious beliefs.

See the video of the event and