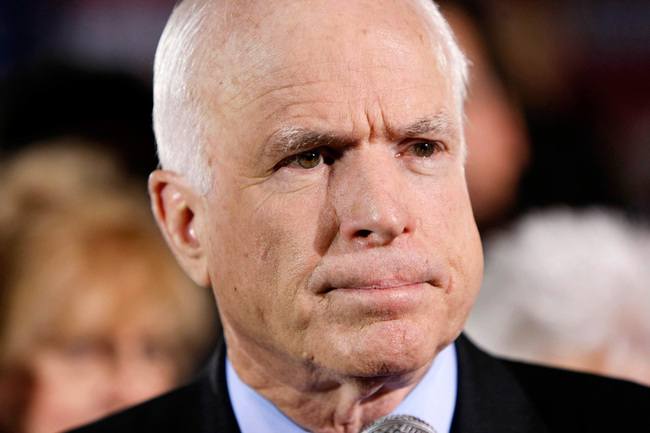 “They were elected, nobody believes that there was a corrupt election, anything else…But I also think that when, you know, it’s always the wacko birds on right and left that get the media megaphone,” said McCain.

When pressed for clarification on who the wackos are, McCain responded “Rand Paul, Cruz, Amash, whoever.”

It seems like just yesterday that McCain was relishing his role as maverick, while using the megaphone provided him by the media to gain the 2008 GOP presidential nomination.

Some Republicans, led by McCain and Senator Lindsey Graham (R, SC), worry that the filibuster, which focused lots of positive attention on Paul, might end up reflecting poorly on the party.

Might these be the same Republicans who nominated Gerald Ford in 1976, sought to nominate John Connally or George H.W. Bush while opposing Ronald Reagan in 1980, nominated Bob Dole, John McCain and Mitt Romney?

Clearly, the most successful nominee in that bunch was the most Conservative: Reagan.  That the GOP continues to cling to the notion that presidential electoral success hinges on nominating the most moderate candidate largely explains their lack of recent success.

To his credit, Republican National Committee Chairman Reince Priebus, who may prove to fit into the Conservative new blood category, described the filibuster as “completely awesome.”

Paul continued by saying he respects both McCain’s military service and his legislative record, but stressed that McCain’s experience does not mean he is always right: “I treat Senator McCain with respect. I don’t think I always get the same in return.”

Americans on both sides of the aisle honor McCain for his service.  However, McCain must realize that it is time to pass the torch of leadership to a new generation of Conservative leaders demonstrably capable of filling his seemingly vacated role as maverick while leading Republicans to electoral victory.