by David Catron
{ spectator.org } ~ In the final scene of Thelma and Louise, when Detective Hal Slocumb realizes that those wacky chicks are about to drive that ’66 Thunderbird over the edge of the Grand Canyon... he runs after them in a futile attempt to prevent their senseless descent toward self-destruction. Slocumb, played by Harvey Keitel, does a good job of conveying the impotent despair that moderate Democrats like scumbag-Steny Hoyer must feel while watching Reps. scumbag liar-Jerrold Nadler and scumbag-Adam Schiff accelerate toward the electoral abyss that awaits their party if they insist on relitigating Russiagate and rummaging through the President’s tax and business records. If they continue to mine the dirty cop-Mueller report for presidential malfeasance and conduct multiple investigations into Trump’s business and tax matters, the effect on Democratic electoral prospects will be comparable to the damage done to that dusty T-Bird after Louise stomps on the gas. The electorate has had enough of collusion conspiracy theorists and Trump truthers. This is reflected in the latest public opinion polls as well as the ratings of cable networks that continue to push the most implausible narratives of White House skull duggery. CNN, for example, managed to lose more than a quarter of its viewers in April. The Hill reports:  CNN’s prime-time ratings dropped a whopping 26 percent in April compared to last year, according to Nielsen Media Research.… The sharp decrease for CNN marked its lowest-rated month in total viewers since October 2015.… In the 25- to 54-year-old demographic that advertisers covet most, it was the network’s least-watched month since Aug. 2015. Nonetheless, the antics of the Democrats on the Senate Judiciary Committee during Wednesday’s testimony by Attorney General Barr augured worse behavior had he decided to appear before its House counterpart on Thursday. Wednesday’s Senate hearing included the usual disingenuous Democratic stunts, but Committee Chairman Lindsey Graham kept the proceedings under control. Sadly, the Chairman of the House Judiciary Committee is scumbag liar-Jerrold Nadler, who is already engaging in irresponsible antics himself, including a threat to have members of the Trump administration  arrested if they don’t comply with committee requests...   https://spectator.org/thelma-nadler-and-louise-schiff/?utm_source=American%20Spectator%20Emails&utm_campaign=578774d6bd-EMAIL_CAMPAIGN_2019_05_02_03_55&utm_medium=email&utm_term=0_797a38d487-578774d6bd-104608113
.
Medicare for All

by Dov Fischer
{ spectator.org } ~ Medical coverage for all — guaranteed. Income for all — guaranteed. Six months’ paid vacation for all — guaranteed. Ph.D. degrees conferred on all — guaranteed.... Lifelong annuities of one million dollars per year for all — guaranteed. Couture clothes for all — guaranteed. Kids who behave for all — guaranteed. Everything for all — guaranteed. And — at that rate — America bankrupt in less than six months — also guaranteed. Likewise, with an America brought to her knees: (i) Chinese ascendancy — guaranteed; (ii) Rise of Arab terror caliphates — guaranteed; (iii) Putin impacting elections — guaranteed; and (iv) The end of American freedom as we have known it for more than two centuries — guaranteed. Reality imposes limits. Ever since we were kids, we all hated limits. Parents imposed limits. We could not have more than twelve milkshakes daily or more than eight twelve-ounce glasses of whipped cream with dinner. Never could understand why. The chocolate milk had to have some milk in it, too. Cholesterol? What’s that? Sugar? Diabetes? But, Mom — it tastes good! Teachers imposed limits. When class was boring, we could not “go to the bathroom” every ten minutes. We had to raise our hands first. Limits, limits. A world of limits dictated by a world of reality where there are no big rock candy mountains. There is no question that our medical system needs improvement. If a person employed at Job 1 enjoys health coverage but contracts a severe chronic illness during the years working there, it is wrong and economically inefficient for a great capitalist enterprise like the United States that she thereupon must resist changing employment to a accept a better job elsewhere because the great health coverage at Job 2 will not cover her pre-existing condition. That is wrong and just-plain inefficient, causing skilled workers to contribute less productivity and to earn less than they can contribute and earn, and then they truly are motivated to contribute and earn...  https://spectator.org/medicare-for-all/?utm_source=American%20Spectator%20Emails&utm_campaign=578774d6bd-EMAIL_CAMPAIGN_2019_05_02_03_55&utm_medium=email&utm_term=0_797a38d487-578774d6bd-104608113
.
Nellie Ohr Has Been Referred
to DOJ for Criminal Prosecution

by sundance
{ theconservativetreehouse.com } ~ Earlier today John Solomon wrote an article noting how congressional investigators were reviewing Nellie Ohr testimony against last month’s release of FOIA documents... There are significant differences between Mrs. Ohr’s testimony about her communication and contacts with DOJ and FBI officials, and the scale of contact within the FOIA release. According to an interview with Representative Jim Jordan, Rep Mark Meadows was considering a criminal referral. This evening, John Solomon is following up and affirming Nellie Ohr has now been referred to the DOJ for criminal prosecution. This doesn’t come as a surprise following the release of transcripts and the ability to contrast testimony from 2018 with recent discoveries and evidence. As a point of fact, Ms. Ohr also lied in her testimony about the timing of her Ham Radio license and use. Not coincidentally, Fusion-GPS owner Glenn Simpson is also being reviewed for lying to investigators about his contacts and activity in connection to the dossier. Nellie Ohr worked for Fusion-GPS and it would appear Fusion was at the center of the effort to construct evidence to support the 2016 election operation against Donald Trump...
https://theconservativetreehouse.com/2019/05/01/solomon-nellie-ohr-has-been-referred-to-doj-for-criminal-prosecution/
VIDEO:  https://twitter.com/esaagar/status/1123703852207833088/video/1
.
European Elections: "The
Battle for Europe has Begun" 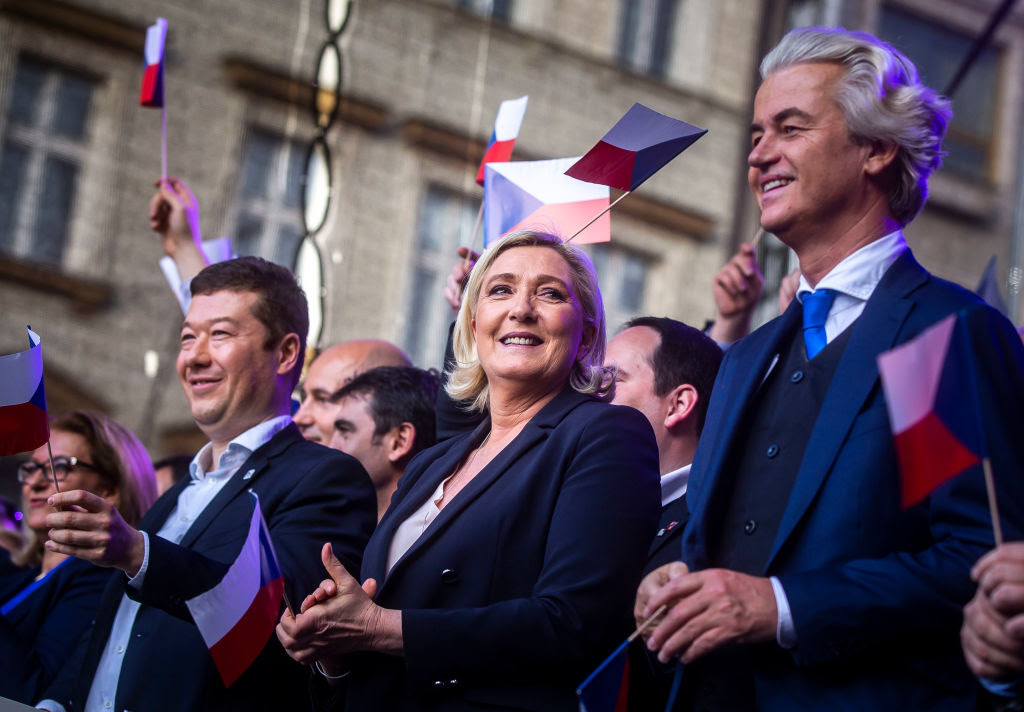 by Soeren Kern
{ gatestoneinstitute.org } ~ The leaders of several European nationalist parties campaigned in Prague on April 25, ahead of the European Parliament elections set for May 23-26... The rally was sponsored by the Movement for a Europe of Nations and Freedom (MENF), a pan-European alliance of nine nationalist parties dedicated to stopping mass migration and recovering national sovereignty from the European Union. The Prague event was organized by the president of the Czech Freedom and Direct Democracy Party (SPD), Tomio Okamura, who was joined by Dutch Freedom Party (PVV) leader Geert Wilders, French National Rally (RN) leader Marine Le Pen, the President of Movement for a Europe of Nations and Freedom (MENF), Gerolf Annemans, and British MEP Janice Atkinson, who is also Vice Chair of the Europe of Nations and Freedom (ENF) political group in the European Parliament. Italian Interior Minister Matteo Salvini, leader of the anti-mass migration League party, sent a video message. They spoke to a crowd in Prague's downtown Wenceslas Square. Following are some excerpts of the keynote speeches: Tomio Okamura, "Dear friends, dear guests, dear Marine, dear Geert, dear colleagues, I warmly welcome you here in the historical center of the Czech capital. We stand here symbolically at the statue of St. Wenceslas. Under the banner of St. Wenceslas, our ancestors fought more than a thousand years of hard struggle for the freedom and sovereignty of the Czech crown countries....   https://www.gatestoneinstitute.org/14168/european-elections-prague
.
commie-Bernie Sanders Pushed False Flag Conspiracy Theory About Domestic Bombings

by Peter Hasson
{ dailycaller.com } ~ Democratic presidential candidate commie-Bernie Sanders once floated a conspiracy theory about the U.S. government orchestrating domestic bombings for political purposes... commie-Sanders launched his 1976 campaign for Vermont governor by suggesting that government agencies were behind a string of attempted bombings across the country. commie-Sanders ran on the Liberty Union ticket — a Vermont political party he co-founded — alongside lieutenant governor candidate John Franco, who also lent credence to the conspiracy theory. commie-Sanders and Franco “coupled the announcement with a disavowal of terrorist bombings and a charge that many such incidents may be instigated by government agencies to undermine legitimate efforts to bring about change,” the Bennington Banner, a Vermont newspaper, reported at the time. Two days prior to commie-Sanders’s announcement, eight letter bombs were sent to seven corporations and a business executive across four different cities. Authorities arrested  two men, Leon Cordell Horton and Ardis Odell Reed, in 1981 for sending the bombs in what prosecutors said was an attempt to extort money from corporations. Both men were later found guilty. The Banner’s story made clear the letter bombs and similar domestic attacks were the attacks to which commie-Sanders and Franco reportedly referred as potentially orchestrated by the U.S. government. Time Magazine noted in 2016 that “protest bombings in America were commonplace” during the 1970s...
https://dailycaller.com/2019/05/01/bernie-sanders-false-flag-domestic-bombings/?utm_medium=email
.
.

Thomas Gallatin:  Following months of gridlock, Venezuelans, encouraged by the rightfully elected and U.S.-backed interim president Juan Guaido and his call for the military to rise up against socialist dictator Nicolas Maduro, heeded his Operacion Liebertad and took to the streets on Tuesday. U.S. Secretary of State Mike Pompeo encouraged the action, stating, “The U.S. Government fully supports the Venezuelan people in their quest for freedom and democracy. Democracy cannot be defeated.”

Thus far the Russian-backed strongman Maduro has refused to budge and instead sent military troops still loyal to his regime to forcefully quell the uprising. This resulted in another Tiananmen Square moment, as shocking video footage surfaced of military vehicles intentionally running over unarmed protesters.

While several dozen troops joined Guaido and clashed with other troops still loyal to Maduro, the conflict has not yet escalated into a forced takeover by Guaido. In fact, he is not in a position to do so — not without gaining majority support from the military. It’s a bold yet risky move by Guaido. Should he fail, it would almost definitely lead to his arrest or worse.

According to Pompeo, the only reason Maduro is still able to cling to power is due to Russian and Cuban support. “It’s been a long time since anyone has seen Maduro. He had an airplane on the tarmac. He was ready to leave this morning as we understand it and the Russians indicated he should stay,” Pompeo said. He added, “We’ve made clear all along … that Maduro is surrounded by Cubans and has been supported by Russians there in Venezuela. And we’ve told the Russians and we’ve told the Cubans, ‘That’s unacceptable.’ It’s unacceptable to starve people. It’s unacceptable to not allow sick children to get their medicine.”

The situation is shaping up like a Cold War-era proxy war, and President Donald Trump will have to decide to what degree the U.S. will involve itself in this political conflict beyond offering verbal and humanitarian support. With the Russians, Chinese, and Cubans all backing Maduro, there is much more at stake than merely ousting a socialist dictator.