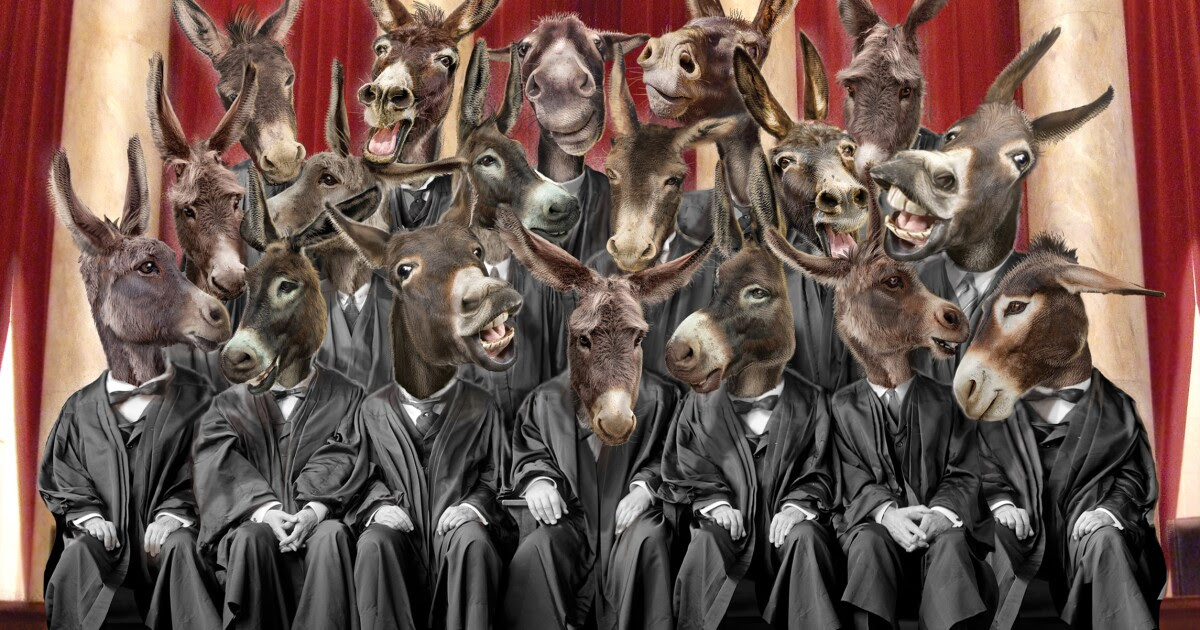 by Ilya Shapiro
{ washingtonexaminer.com } ~ Democrats have finally decided to make judicial nominations an election issue, after essentially ceding the ground to Republicans for decades... scumbag/liar-Hillary Clinton barely mentioned Merrick Garland or the Supreme Court vacancy on the stump; this time around Democrats are going all in. But forget the conventional play of highlighting policy areas where “Trump judges” differ from those a Democratic president would appoint: issues such as abortion, guns, affirmative action, voting rights, and campaign finance. This time, the Supreme Court itself is the target. With their eyes on 2020, Democrats are calling for the court to be fundamentally restructured: adding justices, changing the way they’re picked, and limiting how long they serve. After all, the “illegitimate” conservative majority — Neil Gorsuch “stole” Garland’s seat, while Brett Kavanaugh “is” a serial rapist who hid his work on George W. Bush’s torture program — is also relatively young. Its oldest member, Clarence Thomas, is 70, while scumbag/liar-Clinton-appointed Justices Ruth Bader Ginsburg and Stephen Breyer are 86 and 80, respectively. Solution: Pack the Court! Don’t take that description from me, listen to the Democrats’ own presidential contenders. In a series of interviews, Sens.lowlife- Kamala Harris of California, Elizabeth dinky-Warren of Massachusetts, and Kristen Gillibrand of New York came out swinging for court-packing and more. Gillibrand echoed the common refrain that Gorsuch’s place on the court is illegitimate. dinky-Warren said that it’s “not just about expansion, it’s about depoliticizing the Supreme Court,” and also suggested bringing circuit judges onto Supreme Court cases, either in addition to permanent justices or once the current ones are gone as a rotating platoon. “We are on the verge of a crisis of confidence in the Supreme Court,” lowlife-Harris explained, “and everything is on the table to do that.”...   https://www.washingtonexaminer.com/opinion/democrats-are-courting-disaster?utm_source=WEX_News%20Brief_04/11/2019&utm_medium=email&utm_campaign=WEX_News%20Brief&rid=5261
.
The Intellectual Dishonesty of the
Campaign Against the Electoral College 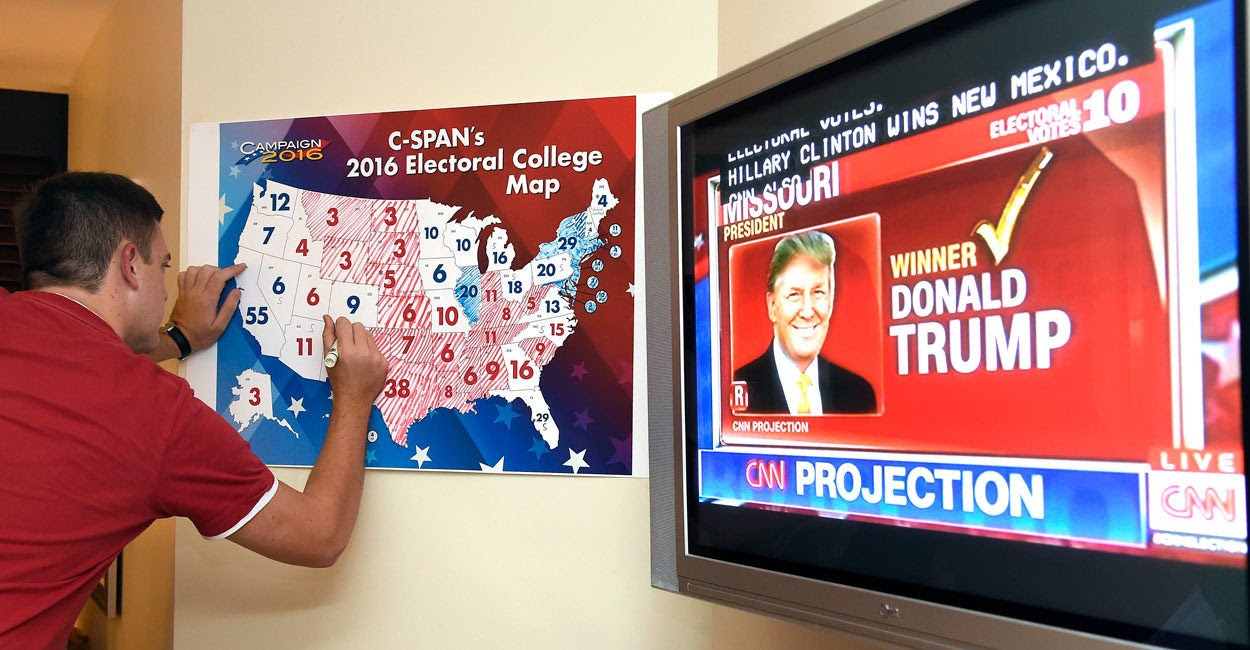 by Jarrett Stepman
{dailysignal.com} ~ A full-blown war is raging against the Electoral College. But as activist groups become more desperate to overturn our way of electing presidents before voters go the polls in November 2020... their arguments become more absurd and hyperbolic. CNN recently ran a preposterous segment suggesting that James Madison called the Electoral College “evil,” a shameful distortion and an absurdity given that the man known as the Father of the Constitution had a direct hand in creating the institution. Others have made more serious but ultimately absurd indictments of the Electoral College. Among the biggest stretches made by critics of the Electoral College is that the institution was created simply to benefit slavery. Left-wing pundits, politicians, and even a few scholars have made this a popular argument. However, it isn’t true and is clearly a smear, a desperate ploy by sophists who want to tarnish the institution because they think it stands in the way of progressive electoral dominance...   https://www.dailysignal.com/2019/04/10/the-intellectual-dishonesty-of-the-campaign-against-the-electoral-college/?utm_source=TDS_Email&utm_medium=email&utm_campaign=MorningBell&mkt_tok=eyJpIjoiT1dGaU4yVTFNR1JoTURWbSIsInQiOiJlRU5hNVpzMUprXC9VOVVBc25sOUZucmVpak4xS1liREE1UkE2XC9XQVJzaFYwMlVJQ2Z6Skp5eUM5d1BhYkxGSTQ2MVhmNWEyZ0JsVDY2Q0dVQ1FreVBDNlNzMFg4emprdWpudmtJclRcLzZEekVLMDc3dExuMzNJXC9pRlNkdU4rMTEifQ%3D%3D
.
U.S. Blocks BDS Co-Founder
Barghouti from Entering the Country

by Steven Emerson
{ investigativeproject.org } ~ Omar Barghouti, a co-founder of the movement to boycott and sanction Israel, a movement which many backers hope will lead to Israel's elimination... was supposed to arrive in Washington, D.C. yesterday to give two lectures and to meet with members of Congress. Instead, he's back at his home in Israel. The Arab American Institute, one of Barghouti's hosts, announced Thursday morning that Barghouti, "prominent Palestinian human rights activist, was denied entry into the United States at Ben Gurion Airport despite having valid travel documents. We at AAI invited him to DC to participate in a number of speaking engagements and educational programs." The announcement came less than a half an hour before the first of those engagements started. Arab American Institute founder and President James Zogby promised to litigate the issue. "Our regressive, discriminatory discrimination laws are an impediment to free speech," he said. But Barghouti is not being silenced. He appeared via computer link and engaged in the same question and answer session with journalist Peter Beinart that would have happened had he been allowed into the country...
https://www.investigativeproject.org/7891/us-blocks-bds-co-founder-barghouti-from-entering
.
Watch the Beresheet Spacecraft
Land on the Moon 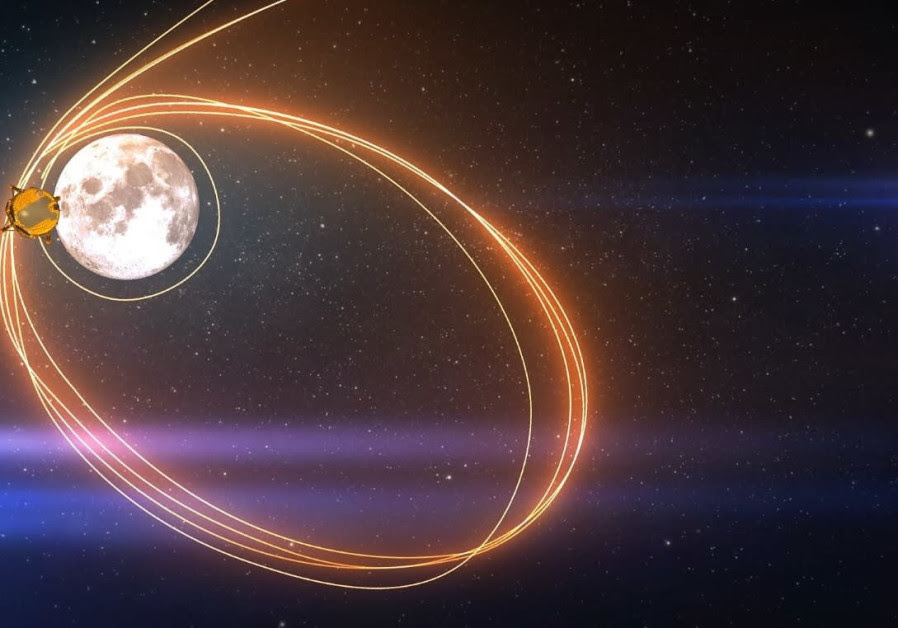 by Marcy Oster/JTA
{jpost.com} ~ The country has Beresheet mania. Tens of thousands of Israelis had stayed up until the wee hours of the morning to watch the lunar lander’s launch... from Cape Canaveral in Florida on Feb. 21 aboard a SpaceX Falcon 9 rocket. This time the hour will be more civilized, with Beresheet expected to touch down in the northeastern part of the Sea of Serenity, a flat area on the moon’s surface, sometime between 10 and 11 p.m. in Israel. A successful landing will make Israel the fourth country — after the Soviet Union, the U.S. and China — to land a spacecraft on the moon. Other touch-down events also sponsored by the Israel Space Agency are planned for Kiryat Shemona in the north, Mitzpeh Ramon in the south, Givatayim a suburb of Tel Aviv and Jerusalem. Lectures and public viewings are scheduled in at least 15 other locations throughout the country. Last week, SpaceIL broadcast directly from its control room in Yehud, Israel, as Beresheet successfully entered the moon’s orbit in its last major step before the moon landing, making Israel the seventh country to enter the moon’s orbit... Update the Beresheet landing failed.   https://www.jpost.com/Israel-News/How-to-watch-the-Beresheet-spacecraft-land-on-the-moon-586454
VIDEO:  https://www.youtube.com/watch?v=HMdUcchBYRA
.
KEN STARR: scumbag/liar-Hillary
WAS Behind Vince Foster’s Death

by  Ben Sellers
{ .libertyheadlines.com } ~ Former independent counsel Kenneth Starr—the one-time nemesis of the scumbag/liar-Clinton family—has now revealed that scumbag/liar-Hillary Clinton was behind the death of Deputy White House Counsel Vince Foster... But contrary to the many conspiracy theories that have survived a quarter of a century later, Starr—whose investigation determined no evidence of foul play—still maintains that scumbag/liar-Hillary didn’t pull the trigger. Instead, Starr acknowledged recently that the then-first lady berated and humiliated Foster, driving him to suicide, according to the Daily Mail. Foster’s 1993 shooting death in a public park on the outskirts of Washington D.C. unleashed a wave of controversy that marked the arrival of the scumbag/liar-Clintons on the national stage, less than six months into scumbag/liar-Bill Clinton’s first presidential term.As some questioned the forensic reports about where and how he was shot, Foster became one of the earliest entries on an ever-expanding list of scumbag/liar-Clinton associates who met their demise under suspicious circumstances. There was speculation that Foster—a friend and colleague of then-First Lady scumbag/liar-Hillary Clinton from the Rose Law Firm in Little Rock, Arkansas—might have to testify against her as investigators probed the Whitewater real-estate scandal. Starr’s was the last of several investigations, all of which ruled suicide, determining there was insufficient evidence to call it a murder. On his team was a young future Supreme Court justice, Brett Kavanaugh...
https://www.libertyheadlines.com/starr-hillary-vince-foster-death/
VIDEO:   https://mol.im/a/6903755#v-3490351229546706528
.

.
Pollaganda: Why Americans Don't Think They
Got a Tax Cut

Nate Jackson:  Just yesterday, we rebutted the continuing Leftmedia narrative about tax refunds. Yes, refunds may be a bit smaller so far in 2019, but that’s because the vast majority of taxpayers paid lower taxes throughout 2018.

NBC News says nothing at all to correct the record for an obviously misinformed public. At least The Wall Street Journal does tell readers “the reality”: “For 2019, 48% of households are getting a tax cut greater than $500. … Just 5.5% of households face tax increases greater than $100” [emphasis added].

And yet most Americans don’t think they got a tax cut. Why? Democrat propaganda churned by the Leftmedia. This latest entry is pollaganda, reflecting that Americans can accurately repeat what they were told for the last year.

Leftist Vox editor Matt Yglesias claimed a big win: “Nobody likes to give themselves credit for this kind of messaging success, but progressive groups did a really good job of convincing people that Trump raised their taxes when the facts say a clear majority got a tax cut.” That’s what we call dezinformatsiya in a nutshell. ~The Patriot Post