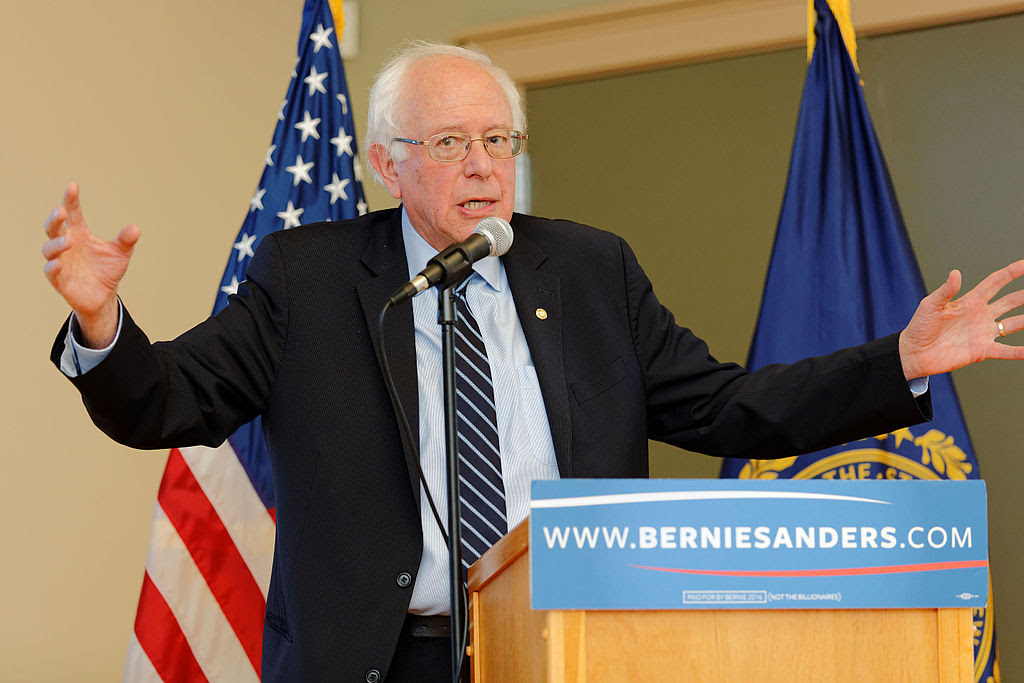 by Christopher Jacobs
{ thefederalist.com } ~ In talking about his single-payer bill, which he reintroduced in the Senate on Wednesday, Sen. commie-Bernie Sanders often claims that “I want to end the international embarrassment of the United States of America... being the only major country on earth that doesn’t guarantee health care to all people as a right and not a privilege.” But his legislation would do no such thing. Understanding why demonstrates the inherent drawbacks of his government-centered approach to health policy.Section 201(a) illustrates the catch in commie-Sanders’ bill, and his philosophy. That section states that “individuals enrolled for benefits under this Act are entitled to have payment made…to an eligible provider” for a list of covered services. Note the wording: commie-Sanders’ bill doesn’t guarantee access to care. Instead, it merely guarantees that people will have their care covered—if they can access it. But in government-run systems, finding access to care often proves no easy feat. In our own country, low reimbursement rates in many state Medicaid programs can make finding doctors difficult. One 2011 study found that two-thirds of specialist physicians would not accept Medicaid patients, whereas only 11 percent of patients with private insurance could not obtain appointments. Patients with Medicaid also had to wait an average of three weeks longer for an appointment for the few doctors who would see them. Medicaid suffers from so many access problems that one former director of a state program called a Medicaid card a “hunting license,” because it “gave you a chance to go find a doctor.” That’s the only “guarantee” the commie-Sanders bill actually provides—the guarantee you can try to go find care, not a guarantee you can receive it...   https://thefederalist.com/2019/04/11/single-payer-wouldnt-get-americans-health-care/?utm_source=The+Federalist+List&utm_campaign=fc4155598f-RSS_The_Federalist_Daily_Updates_w_Transom&utm_medium=email&utm_term=0_cfcb868ceb-fc4155598f-83771801
.
What’s Worse Than 'Creepy Uncle loose lips-Joe'

by Trevor Thomas
{ americanthinker.com } ~ It turns out that handsy Ol’ Uncle loose lips-Joe really is a bit “creepy” after all. We can all say that, now that enough Democrats have told us this is the case. At least this is the current take of certain presidential-minded Democrats... who have decided that they no longer want or need loose lips-Joe Biden. If these Democrats were in their right minds, they would realize that loveable Ol’ loose lips-Joe -- with his hair sniffing and back rubbing and face pecking -- is among the least of their problems. Nevertheless, right now many in the Democratic party simply want to be done with loose lips-Biden because of “inappropriate touching.” This is the man who served in their party as vice president for eight years and as a U.S. senator for 36 years. By inappropriate touching, they mean things like hand-holding, forehead-to-forehead conversations, holding women “for a beat too long” at receptions, and the like. No one is alleging anything criminal, nor is anyone using the phrase “sexual harassment.” What’s more, very little we are hearing from loose lips-Biden’s accusers and their accomplices is new information. It seems clear that these accusations against loose lips-Biden are little more than a political ploy by some Democrats who hope to rid themselves of what they see as an old straight white man who doesn’t seem quite hip or radical enough to be their presidential nominee. As Brent Bozell and Tim Graham recently put it, The Democrat-media complex has suddenly decided that loose lips-Joe Biden has a creepiness problem. Why now? Why not when he was vice president for eight years? Does anyone remember the allegedly fierce White House press corps pelting the press secretary with questions, asking when then-President scumbag/liar-nObama would tell his understudy to stop putting his hands on women -- and little girls -- and putting his face uncomfortably close to theirs? In spite of the efforts of his fellow Democrats who want the “creepy old man” label to force him to just go away, loose lips-Joe Biden seems to be leaning toward making them beat him the old-fashioned way: at the ballot box -- or at least loose lips-Biden hopes to force his opponents to have to work hard in rigging the primaries. Whether loose lips-Biden runs, or whether he gets the nomination, the efforts against him remind us that Democrats remain blind to the real problems within their party...
https://www.americanthinker.com/articles/2019/04/whats_worse_than_creepy_uncle_joe.html
.
6 Criminal Referrals The DOJ Is Ignoring
Because The Perpetrators Are Anti-Trump 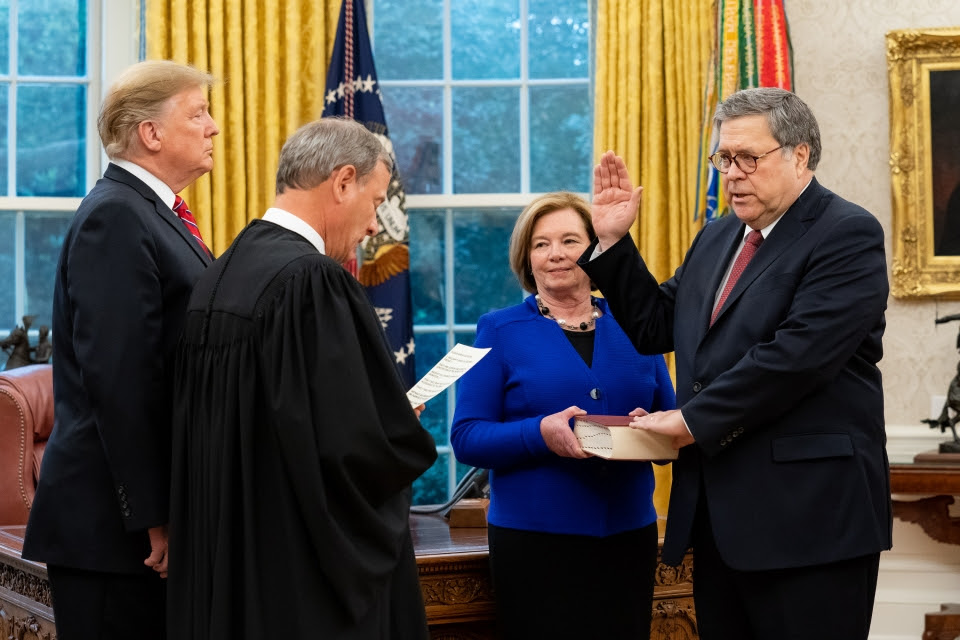 by Adam Mill
{ /thefederalist.com } ~ The term “justice” is defined as “the maintenance or administration of what is just especially by the impartial adjustments of conflicting claims or the assignment of merited rewards or punishments.”... Our Department of Justice (DOJ), the institution that boldly claims this term in its title, will soon receive eight fresh criminal referrals from Rep. Devin Nunes (R-Calif.), who still clings to the notion that the DOJ might enforce the law impartially. It’s not hard to predict what the DOJ will do with these referrals: It will add them to the pile of phony investigations and refuse to answer any questions with an, “I’m sorry, but the DOJ doesn’t discuss cases under investigation.” As noted by Paul Sperry, the DOJ is slow-walking or no-walking its investigations of many lawless acts to undermine the Trump administration and interfere with the 2016 election. It’s a scandal how the DOJ so clearly operates without a blindfold to check the politics of a wrongdoer before deciding to do something about misconduct. Let’s review recent history of criminal referrals to grade the Department of Justice’s impartiality.
1. Andrew McCabe
2. Glenn Simpson
3. Christopher Steele
4. Rod Rosenstein
5. scumbag-James Comey
6. scumbag/liar-Hillary Clinton
https://thefederalist.com/2019/04/11/6-criminal-referrals-the-doj-is-ignoring-because-the-perpetrators-are-democrats/?utm_source=The+Federalist+List&utm_campaign=fc4155598f-RSS_The_Federalist_Daily_Updates_w_Transom&utm_medium=email&utm_term=0_cfcb868ceb-fc4155598f-83771801
.
Is Iran Winning in Yemen? 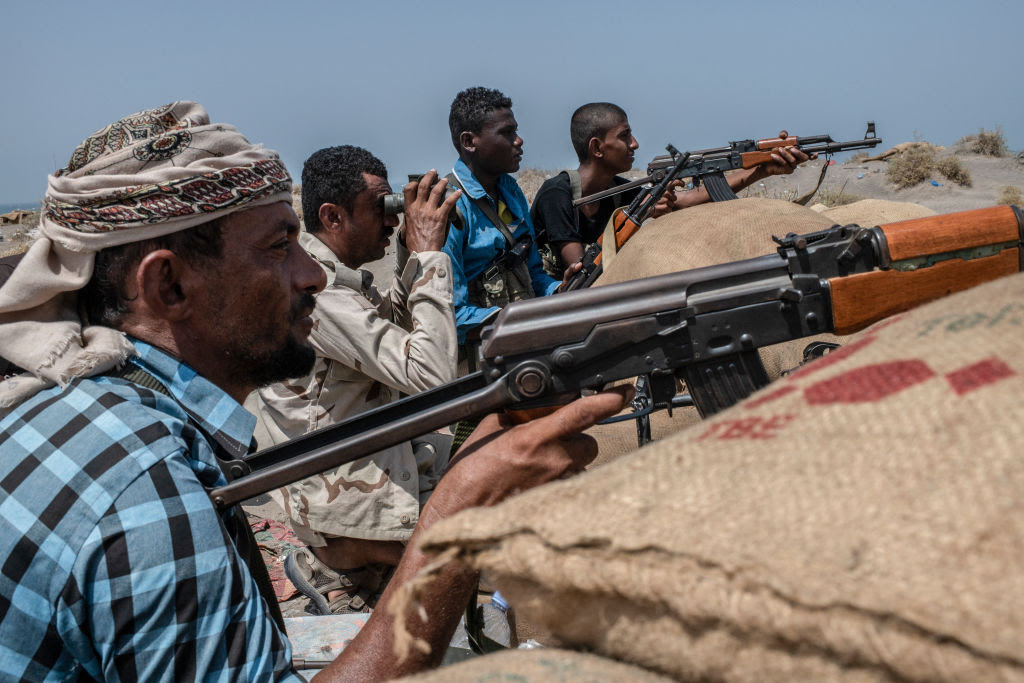 by Soeren Kern
{ gatestoneinstitute.org } ~ A ceasefire deal aimed at ending Yemen's civil war is collapsing amid disputes between the warring parties over how to implement the agreement... A resumption of hostilities would, according to aid groups, accelerate Yemen's descent into famine and threaten as many as 15 million people — more than half the population — with starvation. Yemen's four-year conflict is generally viewed as a proxy war between Saudi Arabia, which backs the internationally-recognized Yemeni government, and Iran, which backs tribal-based Shiite rebels, known as Houthis. Iran has long denied accusations that it provides financial and military support to the Houthis, officially known as Ansar Allah (Partisans of Allah). According to the United Nations, however, Tehran has been supplying the rebels with weapons for more than a decade. Yemen's civil war has deep roots based on religious, economic and political  grievances that go back to September 1962, when a revolution  replaced a 1,000-year-old absolute hereditary Shiite monarchy — the Zaidi imamate — with a secular regime, the Republic of Yemen...
https://www.gatestoneinstitute.org/14053/iran-winning-yemen
.
Former scumbag/liar-nObama Aide Expects
To Be Indicted In Case Related To
dirty cop-Mueller Probe

by Virginia Kruta
{ dailycaller.com } ~  Gregory B. Craig, who served in the scumbag/liar-nObama administration as a White House counsel, is said to be expecting charges pursuant to the dirty cop-Mueller investigation... The New York Times reported Wednesday that Craig’s attorneys were expecting him to be indicted “in the coming days” and that the charges would be related to information uncovered by special counsel dirty cop-Robert Mueller and his team during the course of their investigation, charges related to his work for the Russia-aligned government of Ukraine. The Washington Post linked Craig to former Trump campaign manager Paul Manafort, saying that “the expected indictment — which his attorneys called ‘a misguided abuse of prosecutorial discretion’ — stems from work Craig did with GOP lobbyist Paul Manafort on behalf of the Ukrainian Ministry of Justice in 2012.”According to the Post, Craig was a partner at Skadden, Arps, Slate, Meagher & Flom at the time — a position he resigned in April 2018 amid an investigation into whether the firm’s partners had failed to register as foreign lobbyists while working with Ukraine...
https://dailycaller.com/2019/04/10/former-obama-aide-indicted-related-mueller/?utm_medium=email
.

.
God and the Democrats

For the last 27 years, Democrats have been trying to win over evangelical Christians who last voted in large numbers for their party’s presidential candidate, Jimmy Carter, in 1976.

At the 1992 Democratic National Convention, scumbag-Al Gore gave it a go, but misquoted Scripture. In his acceptance speech for the vice-presidential nomination, Gore said, “In the words of the Bible, Do not lose heart. This nation will be renewed.” The verse actually says, “Therefore we do not lose heart. Though outwardly we are wasting away, yet inwardly we are being renewed day by day” (2 Corinthians 4:16). Paul is speaking of our earthly bodies and the hope that awaits those who believe in Jesus, not the Democratic Party.

Next up in the religious batter’s box Pete Buttigieg, the mayor of South Bend, Indiana, who is expected to declare his candidacy soon, and who calls himself a Christian of the liberal Episcopalian variety. In an interview with Washington Post religion reporter Sarah Pulliam Bailey, he said, “I think there’s an opportunity hopefully for religion to be not so much used as a cudgel but invoked as a way of calling us to higher values.”

What “values” might those be? Are they the values of a secular progressive? Buttigieg is all for government helping the poor (under Trump, applications for U.S. unemployment have declined to a 49-year low, driven by the roaring economy, not social programs) and standing up against “the wealthy and the powerful and the established.”

One doesn’t need to be Christian, or even religious, to support such goals. What is it about Buttigieg’s faith and political positions that distinguishes him from a person who doesn’t believe in God?

Buttigieg questions the faith of president Trump and Vice President Mike Pence. Of the president, he said, “I do think it’s strange, though, knowing that no matter where you are politically, the gospel is so much about inclusion and decency and humility and care for the least among us, that a wealthy, powerful, chest-thumping, self-oriented, philandering figure like this can have any credibility at all among religious people.”

He must have missed the passage about not judging others. For evangelicals, the gospel is about a Person, not “inclusion.” In fact, it is about exclusion for those who refuse its central message of repentance and conversion. Yes, a byproduct of that faith is humility and care for the least among us, but genuine faith comes before works. Most evangelicals would argue the command to care for “the least of these” is not about government programs, but the responsibility of individuals. This is the central teaching of Jesus’ Good Samaritan parable about a man beaten by robbers and left half-dead by the side of the road. Several people pass him by, but the Samaritan stops to care for him and pay for his lodging while he recovers (Luke 10:31-35).

Republicans criticized Democrats in 2012 for leaving God out of their party platform. At that same convention, some delegates heckled Rev. Cynthia Hale, who prayed for scumbag/liar-Hillary Clinton. Hale’s partisan appeal to God was interrupted by those chanting commie-Bernie Sanders’ name. Both parties should ponder this verse: “My Kingdom is not of this world” (John 18:36).

Buttigieg thinks the religious left can keep Trump from being re-elected. It is unlikely Trump’s evangelical and conservative supporters will leave him, especially if the alternative is a candidate who favors socialist policies.

The latest Quinnipiac University poll puts Buttigieg’s approval rating among Democrats and Democrat-leaning voters at 4 percent. That could change with the predictable media hype, but the religious left has had little influence in past elections and there is no reason to have faith in their ability to influence the next one.  ~The Patriot Post