0
TheFrontPageCover
~ Featuring ~
t’s Time for Trump
to Give Mueller a Hard Deadline
by themadpatriots.com

.
Levin – Dems Are Fighting So Hard Because
ALL CORRUPTION LEADS to liar-nOBAMA

by rickwells.us
{ rickwells.us } ~Mark Levin says the reason that scum-Schiff and the rest of the Democrats and their Praetorian Guard media are fighting so hard... they’re not only protecting the liar-Clintons, but more importantly, Hussein liar-nObama. He notes that liar-nObama’s name never comes up so he draws the connections for the audience. Levin says, “Loretta Lynch knew about these FISA warrants, Yates, the Deputy Attorney General, the extensions, Rod Rosenstein, now the Deputy Attorney General, he knew, FBI Director Comey, Deputy Director McCabe, Strzok, the head of counterintelligence, Page, his girlfriend.” He asks, “Who else would have known about these FISA applications and warrants? Well, let me tell you a little secret, these are counterintelligence efforts. You have to assume the National Security Council and the White House knew. Why would the FBI, the Justice Department keep that from the National Security Director in the White House? Why would they keep it from the Deputy Director in the White House?”...  https://rickwells.us/levin-dems-corruption-obama/
VIDEO:  https://www.youtube.com/watch?v=lfbfieFqooA
.
'POLITICAL FIRESTORM': Meet The Man Set To
Ignite D.C. With liar-Clinton Email Investigation

by RYAN SAAVEDRA
{ dailywire.com } ~ An important player in multiple high-level investigations which have dominated national headlines... is about to go from being relatively unknown to becoming a household name – his name is Michael Horowitz. Horowitz is the inspector general at the Department of Justice and is heavily involved in the Russia investigation and the investigation into how the FBI handled the criminal investigation into former Secretary of State liar-Hillary Clinton – a report expected to come out in the next couple months. Bill Hamel, former inspector general for investigations at the Department of Education, heaped praise on Horowitz for his character. "He is really one of the smartest and fairest people I have ever had the pleasure to work with," Hamel said. "He’s a straight shooter and a fair guy. He’s an honest broker."...  https://www.dailywire.com/news/26825/political-firestorm-meet-man-set-ignite-dc-clinton-ryan-saavedra#
.
scum-Adam Schiff Fell For Prank, Had Staffers
Work to Obtain Dirt on Trump from
Foreign Government 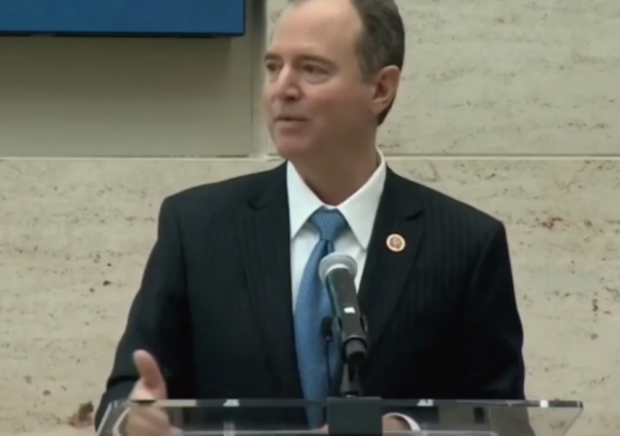 by Kemberlee Kaye
{ legalinsurrection.com } ~ Just when you thought it wasn’t possible, the Trump/Russia collusion story reached an entirely new level of ridiculous... The Democrats leading Trump/Russia/Collusion attack dog, Rep. scum-Adam Schiff, was exposed as having taken well-known Russian pranksters, Vocan and Lexus, seriously. Vocan and Lexus, “offered to give him ‘compromising’ dirt on Donald Trump – including nude photos of the president and a Russian reality show star,” reports the Daily Mail. According to the same report, scum-Schiff’s staff corresponded with someone they believed to be a Ukranian politician in order to obtain the non-existent classified information...  https://legalinsurrection.com/2018/02/report-adam-schiff-fell-for-prank-had-staffers-work-to-obtain-dirt-on-trump-from-foreign-government/?utm_source=feedburner&utm_medium=feed&utm_campaign=Feed%3A+LegalInsurrection+%28Le%C2%B7gal+In%C2%B7sur%C2%B7rec%C2%B7tion%29
.
Judge Nap Wants Trump To Release Dem
Memo To Send Intelligence Community
‘Through The Roof’

by NICK GIVAS
{ dailycaller.com } ~ Fox News legal analyst Judge Andrew Napolitano said he hopes President Donald Trump allows the Schiff FISA memo to be released... and thinks it will drive the intelligence community crazy. “I hope he releases it because it will show who’s spinning, who’s exaggerating,” Napolitano said on Fox & Friends Tuesday. “It will also show … raw intelligence. There’s everything in there. If you like Donald Trump, you are going to find some stuff in there. If you don’t like Donald trump, you’re going to find some stuff in there. So the pressure, once this Democratic memo comes out, the pressure will build for the raw intelligence on which the Republican memo is based and on which the Democratic memo is based to come out.” “That will send the intelligence community through the roof,” he added. “Because this stuff is never ever made public.”...  http://dailycaller.com/2018/02/06/judge-napolitano-democratic-memo/?utm_medium=email
VIDEO:  http://dailycaller.com/2018/02/06/judge-napolitano-democratic-memo/?utm_medium=email
.
Gowdy Blames Rosenstein
For Broad Mueller Investigation

by AMBER ATHEY
{ dailycaller.com } ~ House Oversight Chairman Trey Gowdy blames Deputy Attorney General Rod Rosenstein... for the broad purview of the Russia investigation, he revealed in a Fox News interview on Tuesday. Fox News host Martha MacCallum noted that special counsels often go beyond their initial focus and asked Gowdy if he had fears of that happening with Robert Mueller’s Russia investigation. “You have seen special councils in the past leave their purview and the investigation goes on for a long time, the next thing you know, you are investigating a Monica Lewinsky case when the president didn’t even know her when the special counsel began his work. You don’t have any fear of that here?” MacCallum asked...  http://dailycaller.com/2018/02/06/gowdy-blames-rosenstein-mueller-investigation/?utm_medium=email
VIDEO: http://dailycaller.com/2018/02/06/gowdy-blames-rosenstein-mueller-investigation/?utm_medium=email
.

.
t’s Time for Trump
to Give Mueller a Hard Deadline
by themadpatriots.com
{ themadpatriots.com } ~ Even those who understand the significance of the House Intelligence Committee’s memo have been telling President Trump through the media that he must not fire Deputy Attorney General Rod Rosenstein or Special Counsel Robert Mueller. This, they say, would only make things worse. Democrats would cry foul with more ferocity than they’ve ever cried about anything. You wouldn’t be able to pick up a newspaper or turn on your television without seeing reference to Nixon’s “Saturday Night Massacre.” Republicans would potentially have no choice but to bring impeachment proceedings against the president, throwing this country into even more disarray than we already find ourselves in.

But okay, let’s take it as fact that it would be “bad” for Trump to fire Rosenstein or Mueller at this time. That’s fine. Let the Russia investigation proceed…but not indefinitely. It’s time for the president to reassert his authority over the Justice Department and put an end to what is now – with the release of the memo – undoubtedly a purely political witch hunt. Give Mueller a hard deadline – early summer at the very latest – and tell him that whatever he’s going to conclude, he needs to conclude it by then. That gives him plenty of time to wrap things up, interview who he needs to interview, indict who he wants to indict, and put a pretty bow on top.

Here’s what it prevents: Letting Democrats and Mueller unveil an October Surprise on the Republicans in the runup to November’s midterms.

Because left unimpeded, that’s exactly where this is headed. The idea that Mueller COULD even bring an indictment against a sitting president is quite silly, even if he had the goods to do so. The idea that a Republican-controlled Congress would pursue impeachment is equally unlikely, and the Democrats know this all too well. So what is the point of this investigation? Why are we spending so much money on this nonsense, when if there was ANY proof of collusion it would have come out a year ago? And the answer to those questions is obvious. The Democrats are waiting and biding their time, and when they feel the public is ready for a cough, cough bombshell, they’re going to drop it. Not in federal court, but on the front page of the New York Times.

This “bombshell” won’t be anything that actually proves the narrative – that Trump colluded with Moscow to win the election. As we said, if there was any evidence of that, we would have already known about it. No, it will be something along the lines of a “crime” Trump or his business committed twenty years ago. Or it will be something having to do with the ludicrous charge of obstruction. Or maybe Mueller will try to pinch Trump on perjury. Once a seasoned prosecutor has the full weight of the intel community on his side, there’s really no end to the chicanery that can transpire.

There’s no good reason for Trump to wait around for that to happen. Mueller has had long enough to conduct a thorough investigation. Give him another four or five months and that’s it. After that, it’s over. If you’ve got a political bombshell to drop, you can do it in June just as easily as you can in October. It’s time to bring this fiasco to an end.
http://www.themadpatriots.com/freedom-news/its-time-for-trump-to-give-mueller-a-hard-deadline/
E-mail me when people leave their comments –
Follow