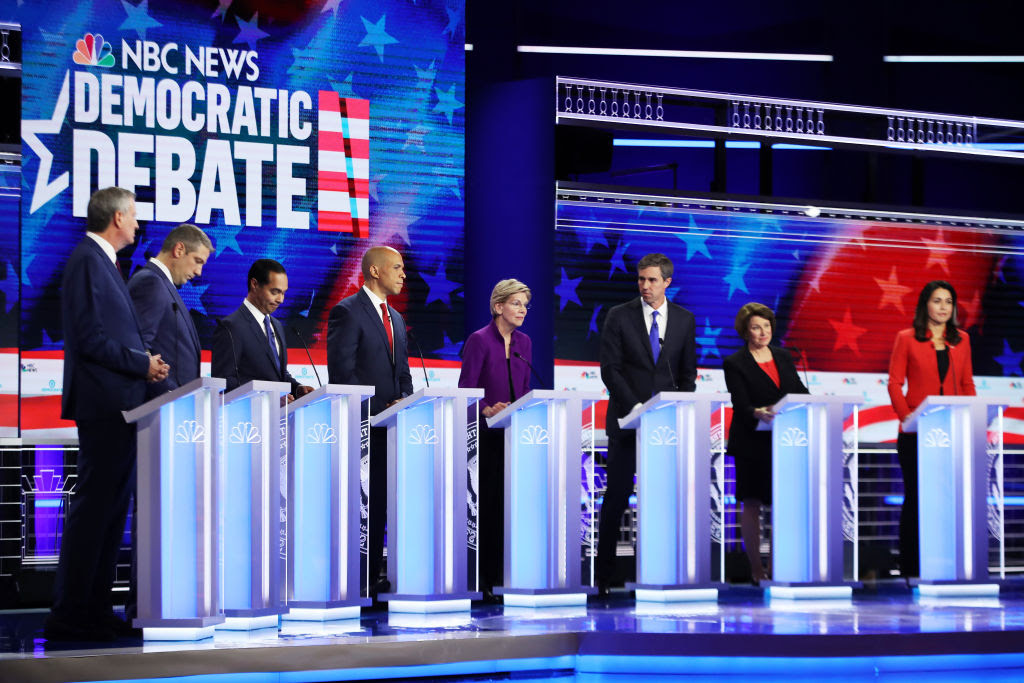 by Majid Rafizadeh
{ gatestoneinstitute.org } ~ The ruling mullahs of Iran, whose undue influence and bullying in the region have been significantly restrained by America in times past, have, as expected... been championing hate and dissent against Washington. They have been  monitoring events in the United States with keen attention; a vivid example is the massive interest the Democratic Party's presidential campaign is receiving from the Islamic Republic of Iran. The mullahs seem to enjoy a cordial relationship with the Democratic Party -- why not? The former administration of President Barack scumbag/liar-nObama was most generous  and sympathetic to their cause: being able to create a nuclear-weapons capability. As of now, nine or ten out of twenty candidates of the Democratic Party have been qualified to participate in the third round of presidential debate and Iran has been closely monitoring the situation examining the willingness and determination of each of the candidates to return to the Joint Comprehensive Plan of Action (JCPOA), commonly known as Iran nuclear deal. Iran's state-controlled newspapers have, in fact, been filled with headlines from statements by the democratic candidates about Iran. Updates on the debate have become the staple everyone is chewing on in Iran as we speak. Etela'at (Intelligence), Iran's leading hardline newspaper, saluted Senator commie-Bernie Sanders: its front page headline read, "commie-Sanders: I'll Return to JCPOA on First Day of Presidency!" The Jomhori Islami  newspaper boasted that "US Representatives Urge Return to JCPOA". Iran's Vice President responded, according to Iran's Ebtekar newspaper, by stating that "Iran's Return to JCPOA is Very Easy". We all know that the Iranians are not friends of democratic norms and principles, so possibly there might be something in it for them to be so interested in America's political scene? First of all, the return to the Iran nuclear deal, cancelled by President Donald J. Trump, would ensure that billions of dollars would be flowing again into the treasury of the theocratic establishment; there is a precedent to it. President scumbag/liar-nObama during his tenure made significant concessions to the Islamic Republic. He transferred  cash and $1.7 billion to Tehran; showered the ruling mullahs with $150 billion in lifted sanctions, and struck secret agreements under the nuclear deal, such as paving the way for Iranian leaders to advance their nuclear capabilities at a higher level and reducing the nuclear break-out timeline from one year to six months before the nuclear agreement was to end...
https://www.gatestoneinstitute.org/14727/iran-democrat-presidential-debates
.
Trump signs executive order cancelling
student loan debt for disabled veterans By Andrew O'Reilly
{ foxnews.com } ~ President Trump signed an executive order on Wednesday that forgives all student loan debt for any permanently disabled U.S. military veterans... The order, which Trump signed following a speech at the American Veterans National Convention in Louisville, Ky., also clears those eligible veterans from having to pay any federal income tax on the loans. Trump added that he is pressuring individual states to follow suit. “The debt of these disabled veterans will be completely erased,” Trump said. “That’s hundreds of millions of dollars of student loans debt for our disabled veterans that will be completely erased.” The memo Trump signed directs the government to develop an "expedited" process so veterans can have their federal student loan debt discharged "with minimal burdens." Currently, just half of the roughly 50,000 disabled veterans who are qualified to have their federal student loan debt forgiven have received the benefit because of a burdensome application process. Under the current process, disabled veterans can have their debt forgiven under a loan forgiveness program, called Total and Permanent Disability Discharge, or TPD, as long as they have a VA service-connected disability rating of 100 percent. As of July, however, only about 20 percent of the eligible pool of veterans had  taken advantage of the program due to the complicated nature of the application and other factors...
https://www.foxnews.com/politics/trump-signs-executive-order-cancelling-student-loan-debt-for-disabled-veterans
VIDEO:  https://video.foxnews.com/v/6015850085001/
.
Fentanyl Trade Is Spreading, Feds Warn 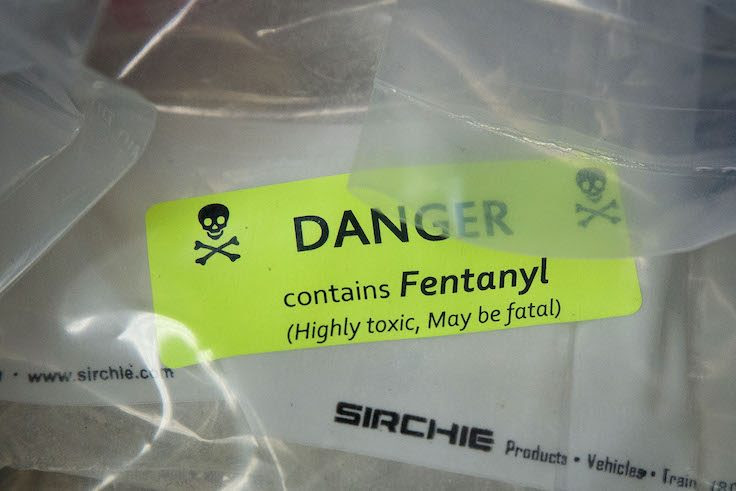 by Charles Fain Lehman
{ freebeacon.com } ~ The market for fentanyl, the deadly synthetic opioid, is growing in rapid and disturbing ways... a series of advisories released Wednesday by the Office of National Drug Control Policy (ONDCP) indicate. The advisories lay out the ways private enterprises—including e-commerce sites, shippers, and pharmaceutical interests—could help to combat what is likely the deadliest drug in U.S. history. In 2018, more than 30,000 drug overdose deaths involved fentanyl or its analogs, meaning that synthetic opioids killed more people than heroin, methamphetamine, or cocaine. Fentanyl is 50 to 100 times more potent than morphine, which means it packs a high potency into a small volume. Much of the U.S. drug supply is now adulterated with the drug, meaning that even users attempting to avoid opioids and control their use may accidentally overdose and die. According to ONDCP, most of the fentanyl in the United States is produced in China, then smuggled in over the northern and southwestern borders or shipped in via shipping containers or the U.S. mail. On Wednesday, the Treasury Department announced that it had designated two Chinese nationals and a Chinese drug trafficking organization as "significant foreign narcotics traffickers" under federal law, adding yet another group to an already long list of Chinese drug smugglers.  The Treasury announcement is just the latest move in the Trump administration’s pressure campaign on the Chinese government to address the fentanyl problem. In April, Chinese officials announced that they would follow up on a promise to schedule fentanyl and its analogs, making it easier for drug enforcement officials to crack down on production...  https://freebeacon.com/issues/fentanyl-trade-is-spreading-feds-warn/?utm_source=Freedom+Mail&utm_campaign=9e4f5c5e6f-EMAIL_CAMPAIGN_2019_08_21_08_13_COPY_229&utm_medium=email&utm_term=0_b5e6e0e9ea-9e4f5c5e6f-45611665
.
Putin Pledges Russian Response
to U.S. Cruise Missile Test 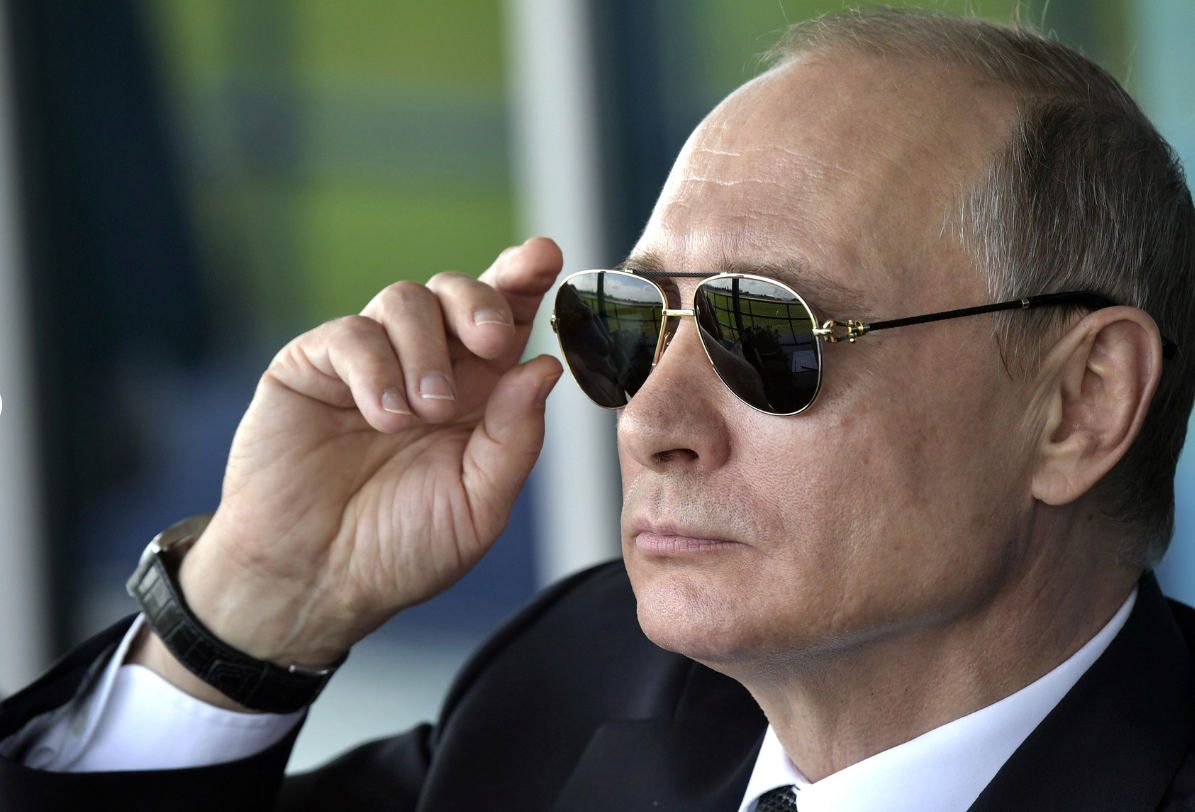 By Sam LaGrone
{ news.usni.org } ~ Russia pledged a response to a Sunday test of a U.S. ground-based cruise missile the Pentagon conducted two weeks after the expiration of the Intermediate-range Nuclear Forces Treaty in early August... Russian President Vladimir Putin said, following a Helsinki meeting with Finnish President Sauli Niinistö, the speed with which the U.S. tested a modified Tomahawk Land Attack Missile indicated the Defense Department had been working on the system long before the U.S. declared it would withdraw from the INF treaty. For Russia it means, “the emergence of new threats,” Putin said, reported The Associated Press. The missile successfully struck a target from a ground station in Hawaii at 310 miles, the minimum range of the INF treaty. The TLAM has a range of about 1,000 miles. While the Pentagon hasn’t released many details on the test of the TLAM, photographs and video released show what appears to be a modified Raytheon TLAM Block IV fired from a jury-rigged Lockheed Martin MK-41 Vertical Launch System cell mounted on a standard-sized trailer. The project was overseen by the Pentagon’s Strategic Capabilities Office. The SCO was created to tweak existing weapon systems to create new warfare capabilities. For example, In 2016 then-Secretary of Defense Ash Carter announced that the SCO and the Navy had modified the anti-air Raytheon Standard Missile 6 to function as a supersonic anti-ship missile. In terms of the TLAM test, the U.S. would already have had several lessons learned from the Navy’s development of the Aegis Ashore. Based on radars and systems found on the Navy’s guided-missile cruisers and destroyers, the ground-based Aegis Ashore installations in Romania and Poland drew criticism from the Kremlin since it employed the MK-41 launcher that could conceivably fire a Tomahawk as well as the ballistic missile defense SM-3s. While the U.S. said the MK-41s were modified to only field the SM-3s, Moscow claimed the installations was a violation of the INF treaty...  https://news.usni.org/2019/08/21/putin-pledges-russian-response-to-u-s-cruise-missile-test?utm_source=USNI+News&utm_campaign=8b5cd8f8d7-USNI_NEWS_DAILY&utm_medium=email&utm_term=0_0dd4a1450b-8b5cd8f8d7-231491269&mc_cid=8b5cd8f8d7&mc_eid=3999f18767
.
U.S. Clears Sale of F-16 Jets to Taiwan 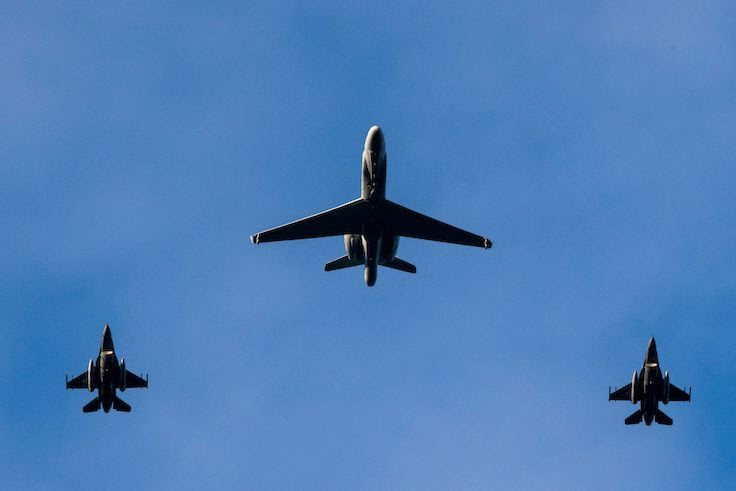 by Bill Gertz
{ freebeacon.com } ~ The Trump administration on Tuesday formally cleared the sale of 66 new F-16 jet fighters to Taiwan... in a bid to bolster the island nation's air power. Randall Schriver, assistant defense secretary for Indo-Pacific security affairs, said the jet sale is partly a response to the growing threat posed by China. "We've tracked the growing threat for a long time," Schriver told the Washington  Free Beacon, noting annual Pentagon reports. "In addition, part of Taiwan's air force is aging and in need of replacements," he said. "This sale is needed in order for Taiwan to keep a viable air defense," Secretary of State Mike Pompeo said Monday: "The president approved the notice that went up to Capitol Hill … last week so that we could move forward with these F-16 sales." "These are deeply consistent with the arrangements, the historical relationship between the United States and China, the three communiques that layer on top of that," he told Fox News. "Our actions are consistent with past U.S. policy. We are simply following through on the commitments we’ve made to all of the parties." The State Department made the formal congressional notification on Wednesday and said the F-16 C/D Block 70 jets, also known as the F-16V, will promote peace and stability across the Taiwan Strait and in the region. In Taiwan, President Tsai Ing-wen said the new aircraft will bolster the country's air power. "The deal means the nation's brand new air force is about to take off," Tsai said on social media. Anticipating opposition to the deal from Beijing, a State Department official said the jets do not represent a shift in U.S. policy of viewing a single China under current policy and is consistent with the 1979 Taiwan Relations Act...  https://freebeacon.com/national-security/u-s-clears-sale-of-f-16-jets-to-taiwan/?utm_source=Freedom+Mail&utm_campaign=9e4f5c5e6f-EMAIL_CAMPAIGN_2019_08_21_08_13_COPY_229&utm_medium=email&utm_term=0_b5e6e0e9ea-9e4f5c5e6f-45611665
.

Thomas Gallatin:  In a move that further exposes the fact that Planned Parenthood sees providing abortions as its primary purpose, the nation’s foremost abortion mill pulled itself from receiving Title X grant money rather than comply with the Trump administration’s new rule. Following the Ninth Circuit Court’s refusal to stay the rule’s implementation, which Planned Parenthood had requested, the abortion provider elected to forgo $60 million in annual federal grant money, roughly 15% of the overall federal funding the group receives each year.

In a statement Monday, Planned Parenthood sought to paint a different picture, claiming that the group was “being forced out” by President Donald Trump. That explanation couldn’t be further from the truth, as the new rule follows seamlessly with the original intent of the Title X program — a program designed to help low-income Americans with family planning and that explicitly notes that “none of the funds appropriated under this title shall be used in programs where abortion is a method of family planning.” The Trump administration’s new rule serves to clarify and maintain Title X’s prohibition against abortion funding by forbidding any clinic that receives Title X funding from referring a patient to an abortion provider.

Additionally, the rule sets a physical separation restriction for Title X funding and abortion facilities. As The Daily Signal explains, “The rule also establishes that program participants must maintain both financial and physical separation between Title X activities and non-Title X activities. In other words, organizations like Planned Parenthood can’t conduct Title X activity in one room while performing non-Title X-related abortions in another room down the hall.”

While Planned Parenthood contends that abortion is only a small percentage of the overall “health” services it offers, this decision to withdraw from Title X belies that claim. The truth is that the poor and minorities have long been the targets of Planned Parenthood with its commitment to population control — consistent with the racist views of its founder and feminist icon, Margaret Sanger.

Trump’s decision is a welcome one because it prioritizes protecting the lives of the unborn and cuts back on some taxpayer funding going to abortion providers.  ~The Patriot Post