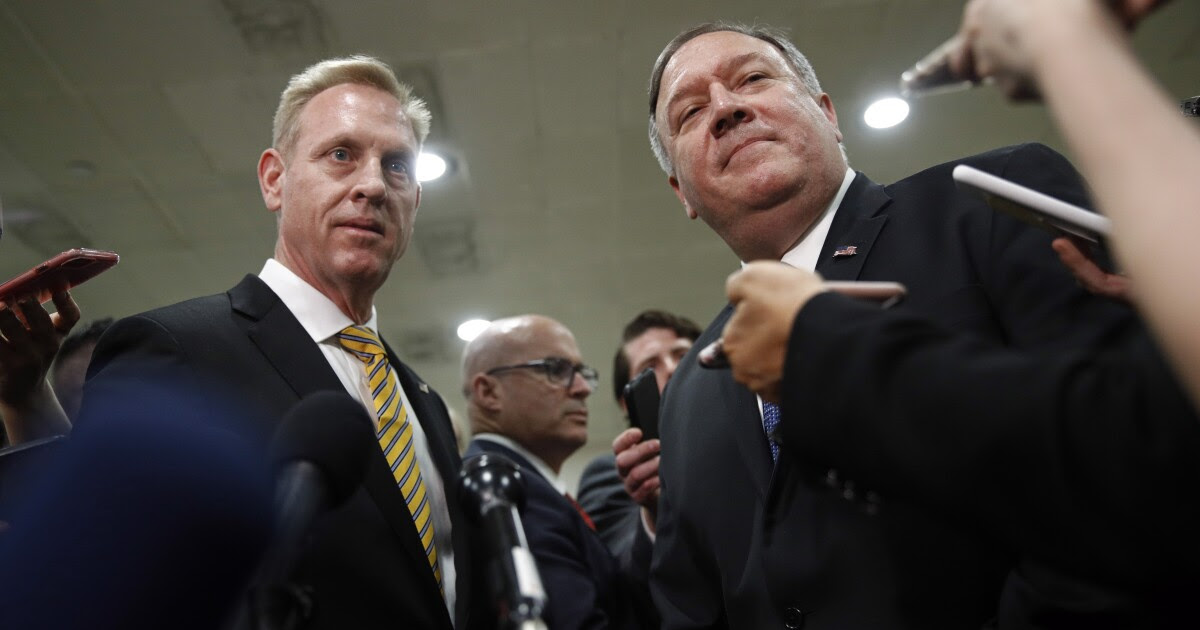 by Joel Gehrke
{ washingtonexaminer.com } ~ A classified Senate briefing on Iranian plots against the United States turned into a tense clash between top U.S. officials and lawmakers frustrated with President Trump’s strategy toward Tehran... “I would say there was a lot of heat in that room,” Sen. Ted Cruz, R-Texas, told the Washington Examiner following the Tuesday afternoon briefing. Key congressional Democrats suggested that President Trump’s administration was preparing for military conflict with the regime based on faulty intelligence or even false pretenses after ambiguous U.S. warnings that Iranian proxies might attack American personnel in Iraq. Secretary of State Mike Pompeo and acting Defense Secretary Patrick Shanahan sought to allay that suspicion in separate meetings, first with House lawmakers and then the Senate Tuesday afternoon. “Today I walked them through what the Department of Defense has been doing since May 3, when we received credible intelligence about threats to our interests in the Middle East and to American forces, and how we acted on that credible intelligence,” Shanahan told reporters after the Senate briefing. "That intelligence has borne out in attacks, and I would say it’s also deterred attacks. We have deterred attacks based on our re-posturing of assets, deterred attacks against American forces.” The controversy shifted in the briefing to complaints that they didn’t communicate with Congress enough in recent weeks and a broader protest against the administration’s withdrawal from the 2015 Iran nuclear deal. Vermont Sen. commie-Bernie Sanders, a top contender for the 2020 Democratic presidential nomination, was among the most aggressive in raising the specter of being misled into a conflict with Iran. “Most Americans know way back when we were lied to about the situation in Vietnam and we went into a war which ended up costing us 59,000 lives, based on a lie,” he said. “In 2003, we were lied to in terms of Iraq supposedly having weapons of mass destruction.”... Get over it commie, we depend on our intelligent not your words.   https://www.washingtonexaminer.com/policy/defense-national-security/classified-iran-briefing-turns-heated-as-trump-team-clashes-with-democrats?utm_source=breaking_push&utm_medium=app&utm_campaign=push_notifications&utm_source=WEX_News%20Brief_05/21/2019&utm_medium=email&utm_campaign=WEX_News%20Brief&rid=5261
.
Trump Endorsed Candidate Wins
Big in Pennsylvania Special Election 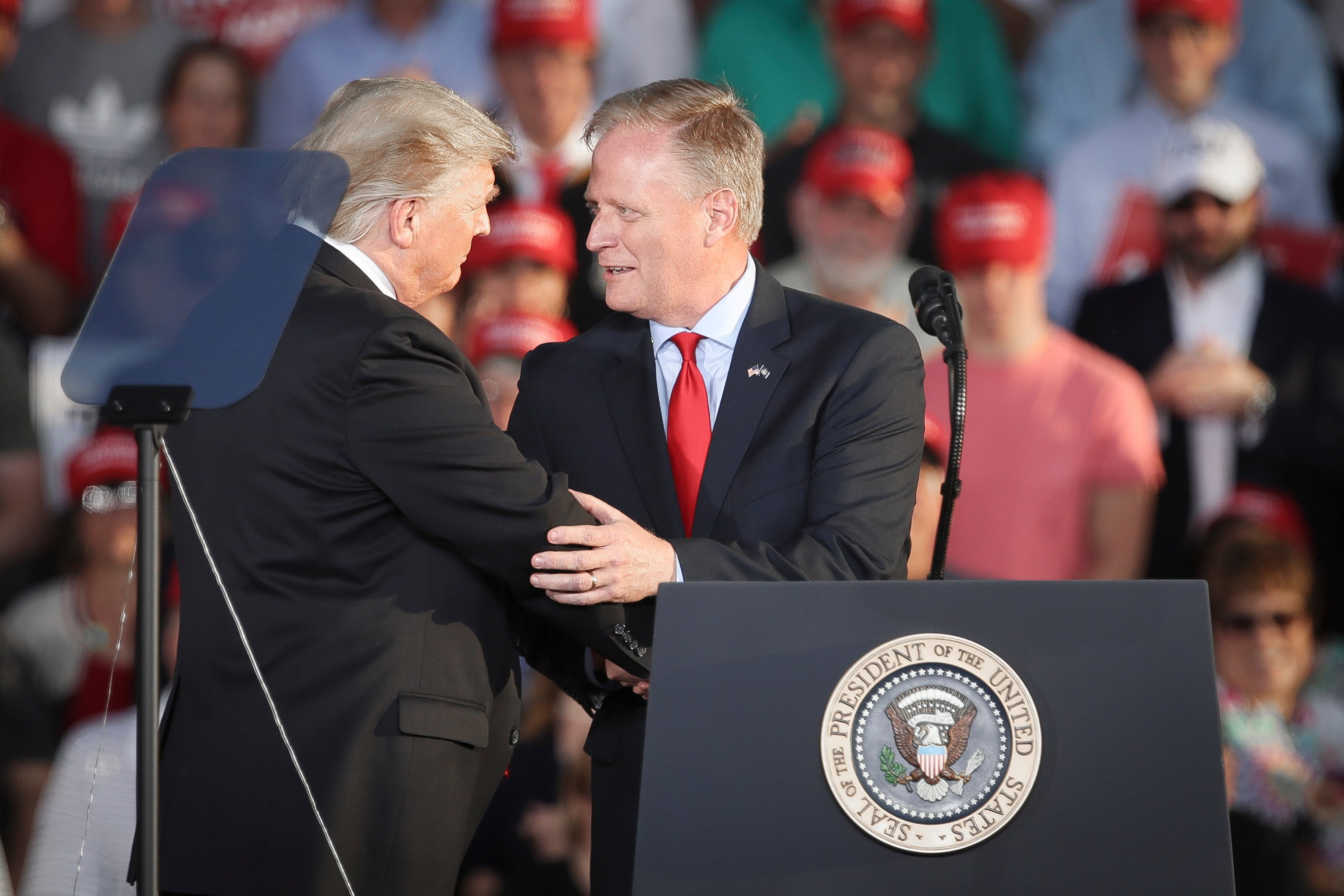 by Evie Fordham
{ dailycaller.com } ~ Republican state Rep. Fred Keller won Pennsylvania’s 12th Congressional District special election Tuesday night... ensuring the district would stay red after Republican Rep. Tom Marino stepped down in January. Keller took 70.3% of the vote with 64% of precincts reporting as of press time, while his Democratic opponent Marc Friedenberg took 29.9%, according to The New York Times. President Donald Trump held a rally for Keller in Montoursville, Pennsylvania, Monday to energize voters the night before the general election. “Fred Keller of the Great State of Pennsylvania has been an outstanding State Representative. Now he is running as the Republican Nominee for Congress, and has my Complete and Total Endorsement. He will do a fantastic job — I look forward to seeing everyone tonight!” Trump wrote on Twitter hours before the rally. Keller has represented voters from central Pennsylvania in the state House of Representatives since 2010, according to Ballotpedia. He will be one of only two members of Congress who never attended college, FiveThirtyEight elections analyst Nathaniel Rakich wrote on Twitter. Keller spoke about his experience with the American dream during an interview with The Daily Caller News Foundation prior to his nomination...
https://dailycaller.com/2019/05/21/pennsylvania-12th-congressional/
.
US House Democrats Subpoena
More Trump Ex-Aides, Including Hicks

by ijr.com:  A U.S. House committee chairman on Tuesday subpoenaed two more former White House aides, including Hope Hicks... just hours after former White House Counsel Donald McGahn was a no-show for testimony before the panel at President Donald Trump’s request. As tensions rose between the Republican president and the Democrats who control the House of Representatives, lawmakers also negotiated for future testimony by Special Counsel dirty cop-Robert Mueller on his Russia investigation and debated whether to launch high-stakes impeachment proceedings against Trump. The showdown between Trump and the Democrats intensified after McGahn, heeding Trump’s instructions, ignored a subpoena from the Democratic-led House Judiciary Committee and did not show up to testify before the panel. Undeterred in a growing conflict with Trump over congressional powers to oversee his administration, committee Chairman scumbag liar-Jerrold Nadler announced he had issued fresh subpoenas to Hicks, the former White House communications director, and to Annie Donaldson, McGahn’s former chief of staff. The subpoenas seek testimony and documents in connection with the committee’s probe of whether the president obstructed dirty cop-Mueller’s inquiry into Russian interference in the 2016 U.S. election and contacts between Trump’s campaign team and Moscow. Despite McGahn’s absence, the committee held a hearing lasting about a half-hour that featured an empty chair at the witness table. scumbag liar-Nadler said at the hearing, “Let me be clear: this committee will hear Mr. McGahn’s testimony, even if we have to go to court to secure it.”...
https://ijr.com/us-house-democrats-subpoena-more-trump-aides/?utm_source=hs_email&utm_medium=email&utm_content=72929221&_hsenc=p2ANqtz-_NJjXjdgKoVJf3zBxg-BqeT65_Z1_7oakBuKx-DDqSo7UmQk3NFTEUXQ_DpwQTSLt_Or2TtF6pEt0TWP2pGNyt3K0axw&_hsmi=72929221
.
Pulosi in a Bind as Calls for Trump’s
Impeachment Grow in the House

by Jennifer Haberkorn
{ .libertyheadlines.com } ~ Numerous House Democrats on Tuesday demanded immediate impeachment proceedings against President Donald Trump amid White House resistance to their investigations... a marked increase in support for launching an effort to remove the president from office. The calls came in response to former White House counsel Donald McGahn’s refusal to attend a congressional hearing, despite a House subpoena. The snub served as a final straw for several Democrats who were already leaning toward starting an impeachment inquiry. There are still many Democrats — chief among them Speaker Nancy Pulosi, D-Calif. — who are reluctant to pursue impeachment, worried about the political risk of appearing too eager to oust Trump and aware that the GOP-controlled Senate is all but certain to refuse to convict Trump and remove him from office. But the move toward impeachment Tuesday puts Pulosi in the middle of a divided House Democratic caucus. She has advocated for a cautious approach, arguing that she would only support impeachment if it is bipartisan and amid overwhelming evidence. She has called a closed-door speaker’s meeting with her members for Wednesday morning to discuss where the House’s many investigations and lawsuits stand. Several Democrats on Tuesday came out publicly in support of an impeachment inquiry for the first time. Among them were prominent Democrats such as Reps. Mark Pocan of Wisconsin and Pramila Jayapal of Washington, co-chairs of the influential Congressional Progressive Caucus; freshman Rep. Mary Gay Scanlon of Pennsylvania, vice chair of the Judiciary Committee; and Rep. Madeleine Dean of Pennsylvania, who is also on the panel. Rep. David Cicilline of Rhode Island, who is chairman of the Democratic Policy and Communications Committee, said Monday night that McGahn’s refusal to testify would push him to call for impeachment...
https://www.libertyheadlines.com/calls-trump-impeachment-grow/
.
Trump, House Democrats Square off in US
Court Over Deutsche Bank Documents

by ijr.com:  Lawyers for U.S. President Donald Trump, three of his children and the Trump Organization will demand in court on Wednesday that a judge stop Deutsche Bank AG and Capital One Financial Corp from providing financial records... to Democratic lawmakers investigating Trump’s businesses. Republican Trump, who is seeking re-election next year, has aggressively sought to defy congressional oversight of his administration since Democrats took control of the U.S. House of Representatives in January. Trump said last month that the administration was “fighting all the subpoenas” issued by the House, hardening his position after the release of a redacted report from Special Counsel dirty cop-Robert Mueller on how Russia interfered in the 2016 U.S. election to help Trump and the president’s attempts to impede the investigation. The contents of the subpoenas have not been made public. Wednesday’s hearing in federal court in Manhattan is scheduled for 2:30 p.m. Deutsche Bank has long been a principal lender for Trump’s real estate business and a 2017 disclosure form showed that Trump had at least $130 million of liabilities to the bank. In March, before issuing a subpoena, Democratic lawmakers asked Capital One for documents concerning potential conflicts of interest tied to Trump’s Washington hotel and other business interests since he became president in January 2017. Deutsche Bank and Capital One said in court filings on May 10 they are not taking a position on whether the subpoenas should be blocked...
https://ijr.com/trump-democrats-square-off-in-court-over-bank-documents/?utm_source=hs_email&utm_medium=email&utm_content=72929221&_hsenc=p2ANqtz-_NJjXjdgKoVJf3zBxg-BqeT65_Z1_7oakBuKx-DDqSo7UmQk3NFTEUXQ_DpwQTSLt_Or2TtF6pEt0TWP2pGNyt3K0axw&_hsmi=72929221
.

Business Review Board:  Patriot Post readers are well-versed in the true history of President Donald Trump’s extraordinary record, particularly when it comes to the economy. One focal point for the president is foreign trade. For two and a half years, Trump has been working to rectify what he argues are major trade imbalances with not only China but also with Canada and Mexico. Recent days brought news that Trump is scrapping tariffs on steel and aluminum from our North American trade partners, to which both nations responded Monday by lifting reciprocal tariffs on not just steel and aluminum but mattresses, boats, and various food items.

Reducing tariffs helps American consumers and farmers, but it was Trump’s primary negotiating chip to secure a better deal. And as we’ve previously noted, the USMCA — the trade agreement Trump negotiated to replace NAFTA — has some good provisions that will benefit Americans and create jobs.

One provision that we find to be particularly Trumpian is that, while Democrats are demanding a $15 minimum wage, a USMCA provision favors workers earning at least $16 an hour. The treaty stipulates that 40%-45% of auto parts sold in North America must be manufactured in factories whose workers earn $16 per hour. That is both “America First” and a bone for labor unions — the very blue-collar workers Trump may rely on to deliver wins in Rust Belt states again in 2020. No wonder union bosses are running to Leftmedia outlets to downplay its benefits.

Meanwhile, Trump worked to close a back door China was using to export cars to the U.S. Various American carmakers produce cars in China — cars then shipped to Canada, modified slightly, and imported into the U.S. sans tariffs. Again aimed at protecting American jobs, this move should please blue-collar workers if they can bypass the misinformation of Democrat Party poobahs who run the unions.

The deal will soon face Congress, so stay tuned.  ~The Patriot Post