.
House Votes to 'Enhance the Border Security'
of Jordan, Lebanon, Egypt and
Tunisia--Not the USA By Terence P. Jeffrey
{ cnsnews.com } ~ The Democrat-controlled House of Representatives has voted to fund efforts to "enhance the border security" of Jordan, Lebanon, Egypt and Tunisia... while moving to deny all funding to build walls, fencing or any other structures to enhance the border security of the United States. Speaker liar-Nancy Pelosi and her lieutenants have their priorities. To them, borders on the other side of the world are more important than our own. On June 19, the House approved a massive spending bill. In an act of legislative polygamy, it "married" the appropriations bill for the Department of Defense to the appropriations bills for the Department of State, the Department of Energy, and the Departments of Labor, Health and Human Services and Education. The Congressional Budget Office estimated this monstrosity would cost taxpayers $984.7 billion in fiscal 2020. Yet there is one thing this bill would forbid the Trump administration from spending one penny to accomplish. On page 304 (of 650), it says: "None of the funds appropriated or otherwise made available by this Act or any prior Department of Defense appropriations Acts may be used to construct a wall, fence, border barriers, or border security infrastructure along the southern land border of the United States." A month later, the House Appropriations Committee sent the full House a bill to fund the Department of Homeland Security. This bill — so far — is unmarried and would cost taxpayers $63.8 billion. President Trump had requested that it include $5 billion to use in constructing barriers at the border. How much did the committee give him? "No funding is provided in the bill for new physical barriers along the southwest border," said the committee report...  Democrat-controlled House of Representatives are sick and stupid and should be removed.  https://www.cnsnews.com/commentary/terence-p-jeffrey/house-votes-enhance-border-security-jordan-lebanon-egypt-and-tunisia
.
President Trump Delivers Remarks
on Federal Judicial Confirmations

by sundance
{ theconservativetreehouse.com } ~ Today President Trump will be delivering remarks from the East room during an event about judicial confirmations.  https://theconservativetreehouse.com/2019/11/06/president-trump-delivers-remarks-on-federal-judicial-confirmations-315pm-et-livestream/
VIDEO:  https://www.youtube.com/watch?v=8ZgqI0j36mA
.
In Politics, everything is Quid Pro Quo

By Brian Joondeph
{ americanthinker.com } ~ “Quid pro quo” is a term being thrown around these days as the latest gambit to “get Trump” after everything else has been tried and failed. It’s a Latin term meaning, "something for something,"... an exchange of acts or things of approximately equal value. As value is in the eye of the beholder, the something being exchanged for another something may not be equal in value, instead skewed based on one’s perspective. Democrats and their media masters are salivating over now having what they believe is a smoking gun to take down President Trump. Notwithstanding that this must be their hundredth smoking gun, and that each previous one misfired, they are hot on impeachment over this Latin term “quid pro quo.” The Washington Post, happy to let democracy die in darkness while they endeavor to overturn the last presidential election, is giddy over quid pro quo. They published this recent headline, “Growing number of GOP senators consider acknowledging Trump’s quid pro quo on Ukraine.” Big deal -- senators are considering something. Many are also considering whether to run for reelection or accept a large campaign contribution from some dodgy donor but “considering” is far from doing. What are they considering? Voting to convict the President if such a vote ever reaches the Senate? No, they are considering whether to acknowledge that the President demanded a quid pro quo. I will make it easy for them. Yes, he did, just as every member of Congress does, each and every day. In politics, quid pro quo is standard operating procedure. Take campaign contributions, for example. I contribute to Senator X because I want Senator X to support legislation favorable to my business interests. My money, something of value, will be exchanged for a tax break or new regulation, which is usually of greater value to me, as a quid pro quo, and perfectly legal and acceptable. A bundler for a presidential candidate raises millions of dollars for said candidate. If that candidate wins the presidency, the bundler may have a choice of any number of ambassadorships around the world. The value of the campaign cash is exchanged for a four-year stint living in the American embassy in London or Paris, attending parties and banquets. Something for something...  https://www.americanthinker.com/articles/2019/11/in_politics_everything_is_quid_pro_quo.html
.
Andy McCarthy: No crime in transcripts

by wnd.com ~ House Democrats who released transcripts of the testimonies of former ambassador to the European Union Gordon Sondland and former Ukraine special envoy Kurt Volker contend... they bolster the case for impeachment of President Trump. But former assistant U.S. attorney Andrew C. McCarthy said Tuesday he doesn't see any crimes or actions worthy of impeachment. "It seems to me like a really botched situation," he said. "And what I'm fearful of, frankly, is we're all going to strain our brains for the next few weeks to get to the bottom of what actually happened here, and what we're going to find is that it's much ado about nothing. He emphasized that "a lot of people had an idea about doing things that they shouldn't have done, but ultimately nothing ever happened." "You know, the Ukrainians got their aid — nothing ended up being pulled back from them. They didn't have to make a commitment to investigate the loose lips liar-Bidens." He believes Ukraine should have been asked to investigate the loose lips liar-Bidens for violations of Ukrainian law, and the aid should not have been delayed after Congress passed it and the president signed the legislation. The best defense, he said, is going to be, "No harm, no foul." In a tweet Monday, McCarthy wrote: "The president's best defense continues to be that any misconduct in his dealings with Ukraine was not impeachable under the circumstances. The sooner he and GOP defenders shift away from 'perfect' and to that, the better off they'll be."...  https://www.wnd.com/2019/11/andy-mccarthy-no-crime-transcripts/?utm_source=Email&utm_medium=wnd-breaking&utm_campaign=breaking&utm_content=breaking
.
DOJ orders House Dems to allow
White House lawyers during testimony 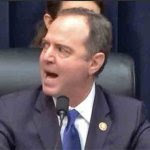 By M. Dowling
{ independentsentinel.com } ~ The DOJ had to publish a memo to House Democrats explaining that committees investigating Trump’s impeachment must allow White House attorneys present or the testimonies will be legally invalid... CNN reported that the Justice Department explained attempts by impeachment investigators to compel testimony from executive branch witnesses about President Donald Trump’s dealings with Ukraine are “legally invalid” unless they allow for the witnesses to bring a government lawyer. CNN said it will anger Democrats as it will further the “non-cooperation from the White House.” They are concerned the White House and other agencies will “use it to stymie House depositions.” The Democrats don’t seem to understand the separation of powers. Subpoenaed witnesses are not showing up just like scumbag/liar-nObama staffers didn’t show up during IRS targeting and scumbag/liar-Hillary email investigations. The DOJ says there must be a White House lawyer present to protect privileged information. The House Intel committee has only allowed personal lawyers. The five-page memo is limited in scope but there will be future fights over executive privilege. As we said, the Democrats don’t understand the separation of powers. OLC attorneys cite a DC Circuit court opinion comparing an impeachment inquiry with a grand jury investigation in a criminal probe, setting up the need to meet a high threshold to overcome the protections of the privilege, CNN stated further. scumbag-Schiff calls everything “obstruction of justice” and affords no civil rights to the President. He knows he must allow White House attorneys. He simply doesn’t care.   https://www.independentsentinel.com/doj-orders-house-dems-to-allow-white-house-lawyers-during-testimony/
.
Bevin campaign requests Kentucky recanvass
after election results deemed 'too close to call' 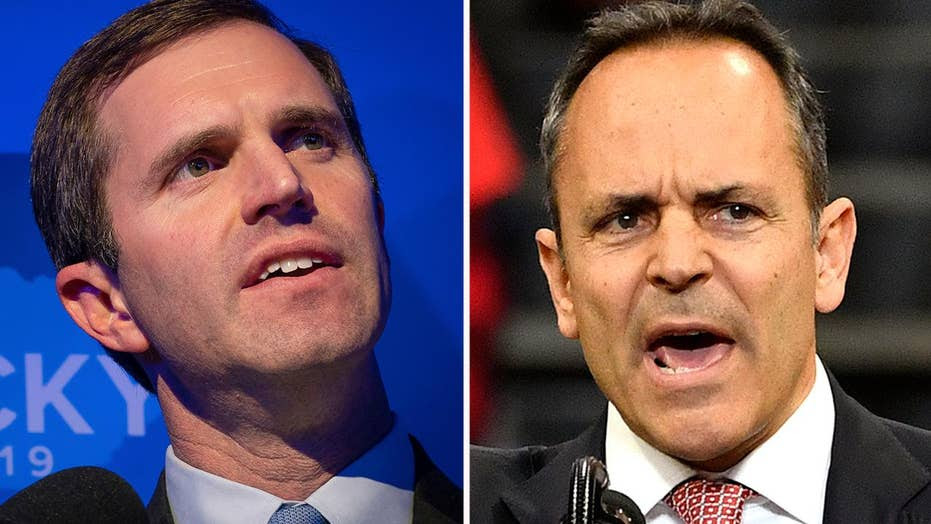 By Vandana Rambaran
{ foxnews.com } ~ Republican incumbent Gov. Matt Bevin is requesting a recanvass in Kentucky's gubernatorial race after initial results from Tuesday night showed he trailed by about 5,000 votes... “The people of Kentucky deserve a fair and honest election. With reports of irregularities, we are exercising the right to ensure that every lawful vote was counted,” Bevin's campaign said in a statement on Wednesday, ahead of a planned news conference. Kentucky Secretary of State Alison Grimes later announced the recanvass will be conducted on Nov. 14 at 9 a.m. A recanvassing requires the county election boards to recheck each machine and report the figures back to the county clerk. Members of both parties are allowed to be present during the recanvassing process. The Associated Press said it could not declare a winner of the closely watched race, owing to the tight margin. The Democratic National Committee and Democrat Andy Beshear's campaign, however, claimed victory. The race has national implications for President Trump, who campaigned in Bevin's home state on Monday to drum up support for the candidate who was neck and neck with Beshear, the state's attorney general. Trump dominated Kentucky in the 2016 presidential elections, winning the state by 30 points and Bevin leaned on the president's popularity to carry him to the finish line. The Republican governor has alienated some supporters by pushing to cut state pension programs and hammering public school teachers for striking -- including his suggestion that the striking teachers indirectly bore responsibility for the  shooting of a 7-year-old girl who remained at home because of school closures. Still, when the race showed signs of teetering towards a win for Beshear, Trump appeared to distance himself from the potential defeat, saying that if Bevin lost, it wouldn't be because of Trump...
https://www.foxnews.com/politics/kentucky-matt-bevin-recanvass-request-beshear
VIDEO:  https://video.foxnews.com/v/6101065976001/#sp=show-clips
.

Political Editors:  Now that House Speaker liar-Nancy Pelosi has held her party-line vote on proceeding with the Democrats’ impeachment “inquiry” over a “whistleblower” complaint charging that President Donald Trump pressured Ukrainian President Volodymyr Zelensky to dig up dirt on loose lips liar-Joe Biden, it may behoove our readers to note why Trump is so interested in Ukraine. Here’s one piece of that puzzle.

Recall back in 2016 Trump’s campaign was hit with a New York Times story alleging that Paul Manafort, his campaign manager at the time, had nefarious ties to the Kremlin via his former client Viktor Yanukovych, the ousted pro-Russian Ukrainian president. Manafort resigned days later after a Times follow-up story revealed more details of a “black ledger” in which handwritten off-the-book payments made to Manafort by Yanukovych’s political party.

scumbag/liar-Hillary Clinton’s campaign quickly took advantage of the embarrassing story and used it as fodder to push the narrative that Trump was in cahoots with the Russians. It can certainly be argued that Trump should have done a better job in screening Manafort, as he clearly became a dangerous liability.

The question is, however, is this: How did the Times come upon its bombshell report? The simple answer is Ukraine. Two weeks after Manafort’s resignation, the Financial Times reported that a Ukrainian member of parliament, Sehei Leshchenko, along with the National Anti-Corruption Bureau of Ukraine, was worried at “the prospect of Mr. Trump, who praised Ukraine’s arch-enemy Vladimir Putin, becoming leader of the country’s biggest ally.” That worry “spurred not just Mr. Leshchenko but Kiev’s wider political leadership to do something they would never have attempted before: intervene, however indirectly, in a U.S. election.”

But the bigger question that remains unanswered — the one on which Trump may have had Rudy Giuliani digging for answers — was, who was responsible for alerting the Ukrainians to the mysterious “black ledger?”   ~The Patriot Post