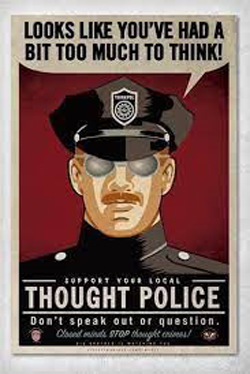 Think about this....if you dare! The concept of self-identification is an evil man-made concept by the Marxist Dimms to maximize the opportunity to divide Americans and create friction between these self-identified groups.

America finds itself in an evil world where anyone can self-identify as anything they feel like identifying as. The reality of science, history, and God fearing civilized society can and is being totally ignored. A certain evil portion of elitist Americans have become so arrogant that they believe they don’t have to acknowledge the reality of science, history, or the heretofore standards of civilized behavior. It would seem that Satan is having a field day of evil perpetrated by his surrogates, the progressive, socialist, Democrat elitists, and their minions in the media and big money. This group is collectively and appropriately known as the Dimms.

In the beginning, people self-identifying were looked upon by our society as dishonest and fraudulent. The most prominent example was the stolen honor crowd that was fraudulently claiming “heroic military service,” when in fact they were something else in the military or never even in the military. Our society agreed this was absolutely wrong. Then there was the case of white American Rachel Dolezal in Spokane, Washington, who represented herself as a black American until she was called out for stolen heritage. And, of course, we can’t forget Senator Elizabeth Warren, who fraudulently claimed to be Cherokee Indian, more stolen heritage. In each of these examples, American society recognized these people were wrong and simply did not have an acceptable level of honor. Just five or ten years ago, self-identification was a bad thing. What in the world happened?

The root of self-identification actions began when the Dimms of the Obama-Biden Administration deemed it acceptable for men to self-identify as women and use whatever bathroom they wished. Although that did garner a certain level of acceptance, American culture generally determined that move was wrongheaded, and it never gained full traction.

As best I can determine,” the old days” ended when Donald Trump became President. Was it because President Trump called out “Pocahontas Warren” for her stealing of Cherokee heritage? Because Trump recognized her self-identification as wrong, did the Trump Derangement Syndrome of the Dimms cause them to start accepting heretofore bad behavior as good behavior? To me, it appears so. The hate demonstrated by the Dimms for Donald Trump rose to unheard of levels, and judging by the fact they still can’t get past Trump, maybe it is a diagnosable mental illness. In other words "How dare you think thoughts not approved by the Marxist Dimms!"

In 2021 America, it would seem anyone can self-identify as anything they want. Government forms have all kinds of options for gender where it used to be only male or female. Institutions of higher education now have a smorgasbord of pronouns one might desire to be addressed as. Really, our universities don’t know there are only two sexes? God and our ancestors are looking down upon us from heaven and shaking their heads. The sexual orientation train has left the tracks!

A small minority of sexually confused individuals and the “woke movement” have abandoned common sense, and driven biological reality out of our culture, and the Dimms in government are supporting this craziness. How can they expect to be taken seriously?

Sometimes I wonder if there is a University of Self Identification somewhere in the universe? If so, this is the place where Bill Gates graduated from to become a COVID 19 medical expert, so he could confidently tell everyone how they should deal with the virus. This is the same place where professional athletes, actors, musicians, become self-identified medical experts, political experts, or experts in any field they self-identify except the field they are actually expert in. And let’s not forget the expert bozos in Washington, D.C. (Sorry Bozo the Clown.) To paraphrase Ronald Reagan, they know so much that just ain’t so!

I think I could even be a graduate of this school and self-identify as an expert in maskology. Then I could give expert advice and tell you masks don’t work. Oh, wait a minute; actual medical experts have already done that.

The concept of self-identification is an evil man-made concept by the Marxist Dimms to maximize the opportunity to divide Americans and create friction between these self-identified groups.

IMHO, their primary goal is creating more hate of thinking patriotic Christian Americans that cling to their guns, Bibles, and traditional moral values.

Remember, someday thinking will be outlawed and obedience will be mandated.