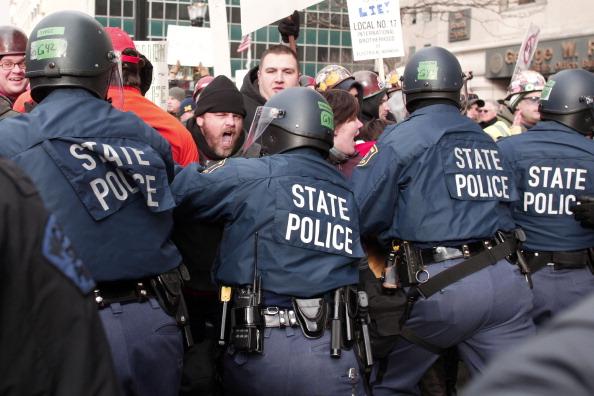 from assaults from organized union protesters

“There will be blood,” angrily threatened State Representative Douglas Geiss openly from the floor of the Michigan House of Representatives on Tuesday, according to Fox News. His frustration in the chamber was shouted out by thousands of organized labor supporters who rallied outdoors in the state capitol in opposition to Michigan’s 'Right to Work’ law. The legislation was signed into law by Republican Gov. Rick Snyder late Tuesday afternoon. Is union tyranny over?

Over the past several weeks, union unrest over right to work legislation had surfaced into slowly burning embers waiting to be ignited. On Monday, the igniter-in-chief arrived. So on Monday when, President Obama visited the Detroit area; he had been scheduled to discuss the fiscal cliff and its impact on Michigan families.

Instead he moved to shove Michigan elected Republican lawmakers off the legislative cliff. He eagerly chided legislators for supporting Right to Work legislation coming to a vote the next day in Lansing, the state capitol.

His invasion into the privacy and sovereignty of the state of Michigan was unnecessary, unwanted, unneeded and served to ignite hot language in an already combustible atmosphere. Instead of sticking to his script or teleprompter, Obama forgot his place and scolded Michigan’s governor and state house and senate leaders by sarcastically stating:

“These so-called 'right-to-work' laws, they don't have anything to do with economics. They have everything to do with politics," He then went on to add, "What they're really talking about is they're giving you the right to work for less money." President Obama

It is abundantly clear that Obama never took an economics course, if he believes that out-of-whack union wages and benefit packages have not placed a stranglehold on state, and local government budgets as well as private sector job creation. In fact, according to Fox News, seven of the states that have the most improved job creation numbers have Right to Work legislation on the books.

If you are a resident of Michigan or any other state and are or have been a member of a union, you know what it feels like to be threatened by union goons. They openly tell you when you can work, and when you cannot, and who you have to support for political office and who you should not. This is not union protection of wages, this is union thuggish behavior, used to harass, threaten and intimidate you!

To add insult to injury all of this is done courtesy of union dues paid by workers!

Yet, the Right to Work drive for Michigan workers arrived this year, past due on the desk of state capitol legislators. Just how could this happen in the cradle of organized unionism? To workers who have long supported this effort, it seems crystal clear. They want the right to jobs and the right to work!