The Reality of Long Term Unemployment Despite the fact that more than 12 million people in the U.S. are still out of work.

Obama’s allies will point out that when the jobs council began two years ago, unemployment was above 9 percent and has since improved to 7.8 percent.  What they conveniently overlook is that the unemployment number has shifted downwards in large part due to people who have exceeded their unemployment benefits are no longer being counted.

So, if you are a middle aged worker who has experienced long term unemployment, you have forever lost what for most people were the peak earning years of life.  A time when under normal circumstances, the opportunity to save for retirement was most feasible financially.

Instead you were drawing unemployment benefits worth less than half what you used to make.  As the result, instead of saving for retirement, you reduced your expenditures (read: standard of living) by half.

Not to mention the loss of medical, vacation, 401k and other employer provided benefits.

Then to add insult to injury, the self-imagined, self-appointed “progressive” intellectual elite ruling class decide that the expiration of the unemployment benefits that sustained your Spartan existence means that for the purposes of their statistics, you are no longer out of work.

Even if you have honestly sought work for years and have been unsuccessful thanks to an economy crippled by their “progressive” economic policies, have used up all your personal savings and are a month or two away from living on the street.

The reality of long term unemployment is not being accurately portrayed by the Obama administration, their 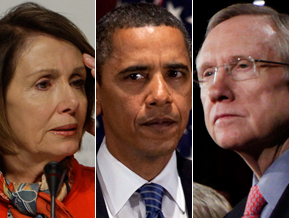 The economy is not growing.  Jobs are not being created.  If you are unemployed, prospects for future employment look bleak.

Their big government “stimulus” spending was devoted primarily to helping their “progressive” allies in blue states that needed the money to balance their own indebted balance sheets.

Every dollar spent on “stimulus” was obtained through a tax on the private sector.  Instead of the private sector having the money they earned to invest in growing business and creating jobs, it was sent to Washington DC, where the cost of an ever growing, bloated bureaucracy was first removed, then redistributed to those deemed fit by the same self-imagined, self-appointed “progressive” intellectual elite ruling class that has shown through their handling of the nation’s unemployment statistics that they are far more concerned with retaining their own grip on power than truly helping the little guy.

If you have a job, thank God and pray to keep it.

The numbers ?  15%  There are in round figures about 225 million working aged Americans

We are entering the final phase of a planned hyper-inflationary depression designed to make us all modern serfs for ever.

Better yet  a QUESTION

Why the push for gun control?

Well  SHEEPLE  you got the guns now but do you have the guts?

No guts no freedom

Comment by Mary Gomez on February 1, 2013 at 8:12pm
I AM ALONG TERM UNEMPLOYED INDIVIDUAL . I LIVE OFF A LITTLE BIT OF SAVINGS . THAT IS ALL .
I LIVE FOR THE DAY THST ALL THESE PEOPLE IN POWER NOW , AND MEMBERS OF THE MSM
ALL FIND THEMSELVES IN THE UNEMPLOYMENT LINES FOR THE REST OF THEIR SLEAZY LIVES .

The "reality" of long term unemployment IS you will have a much more difficult time trying to find anyone who will "want" to hire you because you "have" been out of work, for more than a year, or two!  So much for a "jobs council; if you've been out of work, very long, you would be better off trying to start your own business, whatever it might be.  And that could be "anything" you set your mind to; something you know the "most" about!  Think about it; there is such a long list!

I am just starting my 15th month as one of the unemployed. I have had a few interviews, but when they see the gray hair, they just happen to find someone who is more qualified. I have a Business degree that I got about 4 years ago and graduated with a 4.0 GPA, but it has not done any good in finding a job. I'm in my early 60's and am unemployed for the first time since I graduated from high school. Maybe I can get a job as a Walmart Greeter. God has been good and I am still able to keep a roof over my head and food in the fridge. I had just become eligible for Social Seceurity when I lost my job. Perhaps things will improve starting in 2016.

Those crooks must be thrown out of office!!!!  There needs to be serious discussion about how We The People can accomplish just that.

THANK YOU TEA PARTY FOR SUMMING UP WHY MY FAMILY HAS SUFFERED TOTAL HARDSHIP AND ENDED UP MY FAMILY LITTRALLY IN THE STREET WITH A YOUNG STROKE SURVIVOR/CHRONIC HYPOTENSION, MY YOUNG SON & A DOG, THE LAST 2 YEARS AND OUR FUTURE IS STILL BLEAK AND ADMITTING HOW, WHY & WHO CAUSED IT!!! GREAT ARTICLE, PRAYING FOR ALL THE LONG TERM UNEMPLOYED! THANKS OBAMA AND LEFT LIBERALS FOR DESTROYING MY FAMILY AND MANY MILLION MORE FAMILIES~ I WILL PRAY FOR YOUR SALVATION!!

Every day i read things like this and wonder "How long can Obama keep lying to people and they refuse to see the truth?" I not longer believe the 7.8% figure than i did the incredible drop in unemployment just before the election, it's right there with crying statues!  Obama reminds me of the street drug dealer that socialistic look at and admire his organizational skills. Had he used them to form a legit business she could have done very well.
I have to give Obama credit for doing and outstanding job, of sub-averting our government. Unopposed, effective and even with the blessing of the people. He has done things no other president would even conciser doing, appointing czars? Really what is a czar? what do they do? how much do they get paid? who do they report to? Over throwing the Justice Department with Holder's appointment. Who has shown a blatant  disregard for our Judaical system and ignored our congress, yet is staying for another four years. Even with a contempt of congress charge hanging over his head.

stim-u-less led to further drain on the economy.

that's what happens when you have a community dis-organizer at the helm.

the welfare-slaves are so proud - and like the fools they are, they will soon find themselves without any means of support when the nation crumbles.

Van you are so right. Look at gas prices. In 2008 we were paying $1.79 per gal. It is now almost double and the brainwashed ones get all excited when it comes down .05 cents

Reality ? Long term unemployment will be the new norm. People will work jobs in 6 month shifts. No one will save for anything, much less have health insurance. They will not even be able to pay the penalties. In some states the healthcare system will colapse.