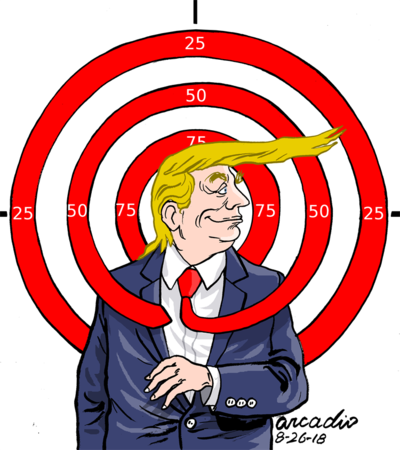 Today, the war on our streets are nothing less than a training exercise. The big war is coming!

They’ll say it didn’t happen, and if anyone does, they’ll be suppressed by mainstream and social media, not only silenced but totally ignored. Don’t worry, you don’t have to vote the Biden-Harris ticket, because the Democrats will do it for you.

The campaign? An outlandish new Trump scandal every day, each one more salacious than the last. Even before ballots of both the mail-in and in-person kind can be counted, the Democrats are convinced that they have already won the Election.

The Democrats and their media surrogates retain tight control of two forces keeping the masses diverted—the Coronavirus, of which a second surge can be expected any day and the looting, rioting and bloodshed in Blue cities like Portland, now in in its 100th day.

The campaign? An outlandish new Trump scandal every day, each one more salacious than the last, and presidential debates, best described as Cable Television Theatre.

Last time out it was DNC Chair Donna Brazile who gave presidential debate questions to Hillary Clinton before debate night. The same Brazile is now a Fox News ever on-the-rant ‘contributor. This time, it will be Chris Wallace lobbing softball questions at Biden in trying to lay the Trump corpse on public view.

The latest made-to-order scandal accuses the troop-loving Trump of calling soldiers who gave their lives in defense of their country, “suckers” and “losers”.

The latest Atlantic magazine scandal, was promoted by Fox News correspondent Jennifer Griffin, and backed by multiple Fox News personnel none of whom mentioned that Atlantic majority stakeholder Laurene Powell Jobs paid $610,600 to the Biden campaign in the second quarter.

“In an appearance on Cavuto Live Saturday, Griffin defended her reporting: “My sources are not anonymous to me and I doubt they are anonymous to the president,” Griffin told Neil Cavuto. “I can tell you that my sources are unimpeachable.” (Forbes, Sept. 5, 2020)

According to most media Trump—and not the Democrats—is trying to undermine the public’s confidence in the election
“Cavuto noted that “you are a very good reporter—and then some. Jennifer Griffin following the story here. She’s pretty scrupulous when it comes to making sure all the i’s are dotted and all the t’s are crossed.”

“Fox News’ Bret Baier said Griffin “is a great reporter and a total class act,” and FNC’s Trey Yingst said of Griffin, “she embodies what the industry is built upon. Truth and accountability.”

Polls—some of them conducted by Fox News—claim that is a given that Trump trails Biden nationally.

According to most media Trump—and not the Democrats—is trying to undermine the public’s confidence in the election.

“The top election officials in many of the key states that could decide the election are Democrats. (Bloomberg, Sept. 5, 2020)

“He (Trump) falsely claims that mail-in ballots are rife with fraud and that the election will be rigged against him.

“This has led Democrats to worry about a scenario where Trump is ahead in the election-night count from in-person voters and declares himself the winner before all outstanding mail-in ballots are tallied.”

Should Trump declare himself the winner, the Democrats hope to send in the military to remove him.

Lost in the madness of counting the votes is that there will be no in-person votes if polling booths are shut down.

Scandals will be streaming down the pike, day by day. “…It will be up to the secretaries of state to preside over the counting of mail-in votes and certify the final outcomes, a process that could take days or weeks. These relatively anonymous state officials could prove a bulwark for Biden as they cope with what is expected to be an unprecedented surge in mail-in ballots because of the coronavirus pandemic. (Bloomberg)

“They will also be on the front lines in countering any claims by Trump or his allies that the election is somehow rigged.

“It will be all hands on deck, but defending election results will definitely start with secretaries of state as the chief election officer,” said Alex Padilla, a Democrat who was elected to serve as California’s secretary of state.

“Karen Brinson Bell, the executive director of the North Carolina State Board of Elections tangled with Trump just this week. Brinson, who was appointed by a Democratic-controlled board, on Thursday warned voters that “it is illegal to vote twice in an election” after Trump encouraged people who mail in their ballots for the November election to also go to the polls on Election Day.

“These mail-in ballots are a disgrace and they know it,” Trump told supporters at a campaign rally in Pennsylvania on Thursday evening, speaking about Democrats and suggesting they could manipulate mail-in voting. “The only way they’re going to beat us is by doing that kind of stuff.”

Meanwhile, the fix is in, and in the scandal mix, the same people who kill babies will accuse Trump of eating them.

It and other scandals will be streaming down the pike, day by day. So, brace yourself, it's going to be a bumpy ride!