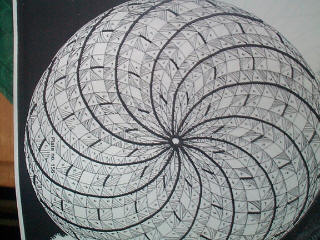 Its founder, Bahá'u'lláh (1817-1892), is regarded by Bahá'ís as the most recent in the line of Messengers of God that stretches back beyond recorded time and that includes Abraham, Moses, Buddha, Krishna, Zoroaster, Christ and Muhammad.

The central theme of Bahá'u'lláh's message is that humanity is one single race and that the day has come for its unification in one global society. God, Bahá'u'lláh said, has set in motion historical forces that are breaking down traditional barriers of race, class, creed, and nation and that will, in time, give birth to a universal civilization. Say I, universal civilization goes beyond this planet. We are inextricably involved in the workings of the universe, each with a unique purpose in life.

Under The Bahá'í Faith, the principal challenge facing the peoples of the earth is to accept the fact of their oneness and to assist the processes of unification, in which I’ve gone into great detail to explain in my book, In Earth as It Is in Heaven 2012. (It will be available at Amazon in June.)

The Basic Teachings of Bahá'u'lláh

The theme of my book is that true religion is in harmony with reason and the pursuit of scientific knowledge. I didn’t know that I was on the Bahá'í faith’s wavelength until this writing.  Astonishingly, the teachings of Baha’u’llah, of all places, sprang up in Iran. Bahá'u'lláh was far ahead of his time. Astrology says this Aquarian is far ahead of his time.  Another thing about the Bahá'í faith that impresses me, the rhythms and routines, including music, being as I’m a musician, I concur that music draws us together.

As for the pursuit of scientific knowledge, Marcos Rodin of Ysidro, California, a nuclear physicist, one of the Bahá'í faith, knowing I was far ahead of my time, sent me a book that included many logarithmic graphics reducing the universe to numbers. The picture I’ve included is one of Rodin’s drawings.  Follow the lines in the drawing. They form a figure eight. There is no beginning and no end.

Einstein reduced the universe to vibrations. Vibrations are represented by numbers. “We owe much of our spiritual and scientific understanding of numbers to Pythagoras, the father of mathematics,” I read in Numerology and the Divine Triangle.  Pythagoras, a Greek, but an ordained Egyptian priest, learned in numbers that one can determine the fundamentals of matter and humans. By the way, Pythagoras was a musician.  He spoke of the music of the spheres.  Harmony breaks down to numbers, and the doubling process from which we are created. Middle C on the keyboard has 256 vibrations per second, the next C up 512, and the next up 1024.

In The Physics of Consciousness, under “A God for Tomorrow,” brain doctor and quantum physicist Evan Harris Walker wrote, “Beginning with the myths and superstitions of antiquity, we have followed a path of discovery into the modern age…. We still believe and we are afraid…. We still hunger to find some god that we can know…. And it follows that the God we find must be a personal God. It is here that we first see that the observer—that we ourselves—must feature in this picture of reality. It is in Einstein’s relativity and in his space-time that matter begins to lose its sharp edge. It no longer cuts antithetical views quite so deeply nor quite so well. Now we see that the independent existence of matter and the absoluteness of space were false dogma…. The observer interacts with matter. Consciousness, the substance of this newfound reality that defines the observer, has fundamental existence. It is the quantum mind that is the basic reality.”  We are approaching the unapproachable “Most Great Name of God.”  A great change is building energy.  Rather suddenly, the turmoil we are currently witnessing will usher in the Age of Aquarius, an age of brotherhood and fraternity.  Prepare, for the kingdom of God is at hand.

Socialism can never work. It goes against human nature.  We are not of hive mentality.  The cutting edge of science and the teachings of Bahá'u'lláh are the wave of the future. Says Walker,  “We have found ways to take the measure of consciousness, to study its contact with the functions of the brain, and to discover how the mind, through the agency of the will, affects matter and transcends the limits of space and time. We have seen how our individual wills, each of which can intervene in the material events of the world, can and must be constrained at some common source…. We have seen matter and space as the natural consequence of nothing more than the fact that consciousness exists…. There is a structure that I as a Christian find justification of the central features of the Judeo-Christian conception of nature. But I also see, as one and the same, a Buddhist conception, even in its most solemn expression—a unity in nature, all things being aspects of the mind.”

Aspects of the mind, consciousness, the definition of God, from the universe to the invidividual, “in earth as it is in heaven,” said Jesus. “But seek ye first the kingdom of God” (Matthew 6:33).