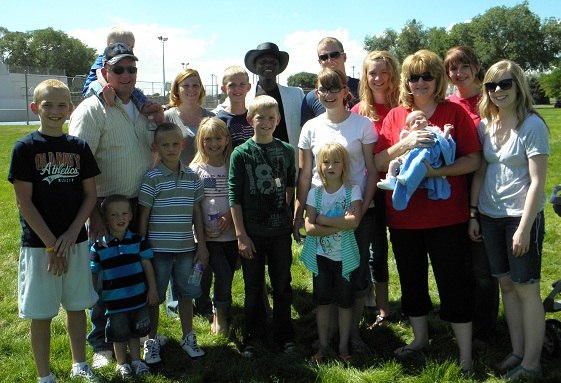 Last year when Tea Party Express rolled into Elko, NV, Mr. and Mrs. Thayne Church had 15 children. Yesterday, the Church family showed up at our tea party rally with mom holding number 16. I really like these people folks. Their kids are well behaved, upbeat and bright.

I asked momma Church the secret to having such an obviously happy family. Mrs. Church said, “We teach our kids they are a blessing to each other”.

The Church family is the kind of salt of the earth good people I have met on all of my five Tea Party Express tours around America. They are not the angry white racist mobs reported in the Obama media.

We did a rally in Salt Lake City, UT and spent the night.

This morning at 5:45am, CNN sent a car to bring me to a studio for a 6:30am TV interview. Yesterday, a producer called me for a “pre-interview interview”. I wanted to take this opportunity of being on CNN to defend the tea party against the left's despicable false charges of racism.

The program producer said they would prefer to discuss my thoughts regarding the Republican presidential field; which candidates are not tea party enough for me. I sensed the producer was baiting me to beat up on Republicans and stay away from the topic of race.

On the TV program, the CNN host had an agenda to trash, minimize the effect and demoralize the Tea Party. I refused to allow her to get away with it.

To the CNN host's displeasure, I even defended the tea party against the false accusations of racism. Arrogantly, the left are relentless in their efforts to portray the tea party as racist and get extremely annoyed when we counter their accusations with the truth.

After my CNN interview, I was back on the Tea Party Express bus for a six hour ride to our next rally in Cheyenne, WY.

As we crossed great plains canopied by spacious skies, Debbie asked if I had ever seen a jac-ca-lope which looks like a cross between a jack rabbit and an antelope. I am a city boy originally from Baltimore. So, I was excited about seeing this animal indigenous to the plains.

I parked myself at the front of the bus along side our bus driver hoping to see a jac-ca-lope. After about an hour, my wife Mary joined me. I told her why I was filled with anticipation visually scanning the massive countryside.

Mary said, “There is no such thing as a jac-ca-lope”.

Then, I heard Debbie Lee laughing. I know the Bible speaks against revenge. But, I am planning my perfect opportunity to pay back Debbie Lee.