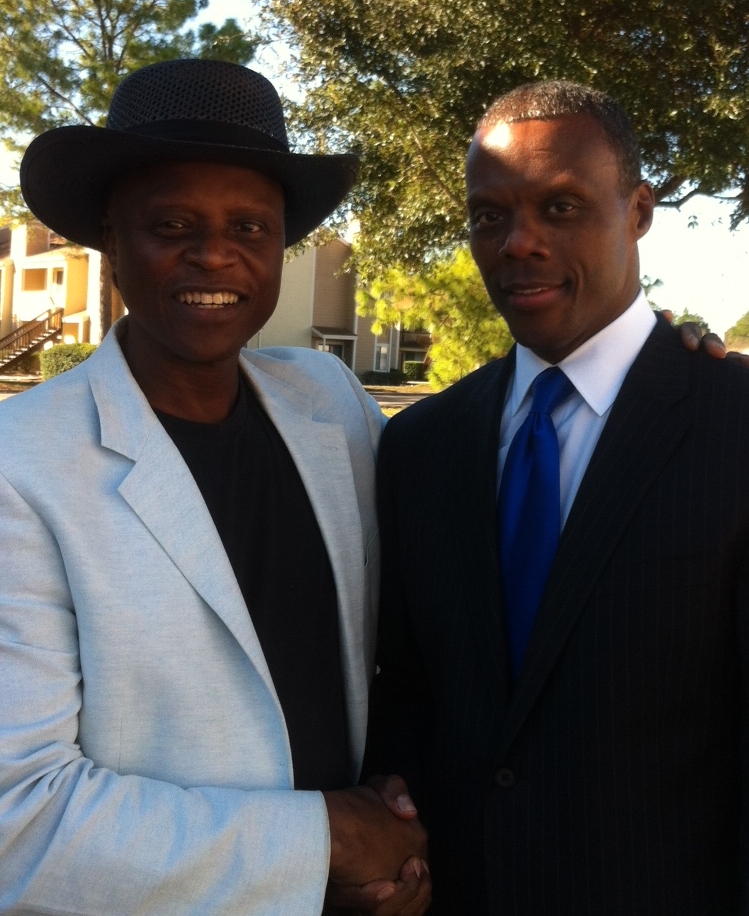 Well, here we go again. Tea Party Express called me 10pm Thursday to hit the road Friday at 2:30pm to begin a four day tour of Florida. Fellow team member and patriot, conservative radio talk show host, Andrea Shea King picked me up at a gas station off of I-95 to rendezvous with the Tea Party Express tour bus in Jacksonville. This life is too glamorous for words.

Our Jacksonville rally hosted by First Coast Party featured former Congressman, J.C. Watts. I did not know he was a Baptist minister until I heard his wonderful compelling speech today. Before he spoke, I met and chatted with Congressman Watts on the Tea Party Express bus. I complemented him for standing firm when he was attacked for being a black republican on the Chris Rock TV show. Congressman Watts said he refuses to fit into a suit someone else has prepared for him, nor will he succumb to group think. I was impressed. J.C. Watts is a great man of character.

Team members were moved by the passion of the Sciolaro family who drove from Kansas to attend our rally. They traveled to primaries volunteering for Rick Perry and were heartbroken when Perry dropped out. As per Perry's instructions, they have rallied around Newt.

The eldest daughter of the Sciolaro family was so frustrated with her college professors, she changed her major to Political Science. Mom, Vicki Sciolaro said she woke up this morning so discouraged about our country that she cried. But, she prayed and God gave her courage to push forward. Folks, the Sciolaro family are great patriots – passionate in their love for America and their commitment to save her. They ARE the tea party.

So, that is it for now. I am on the bus headed to Winter Park, FL for our second of three rallies today. No time to stop for lunch – guess I will microwave a hot pocket; not a big fan of hot pockets. 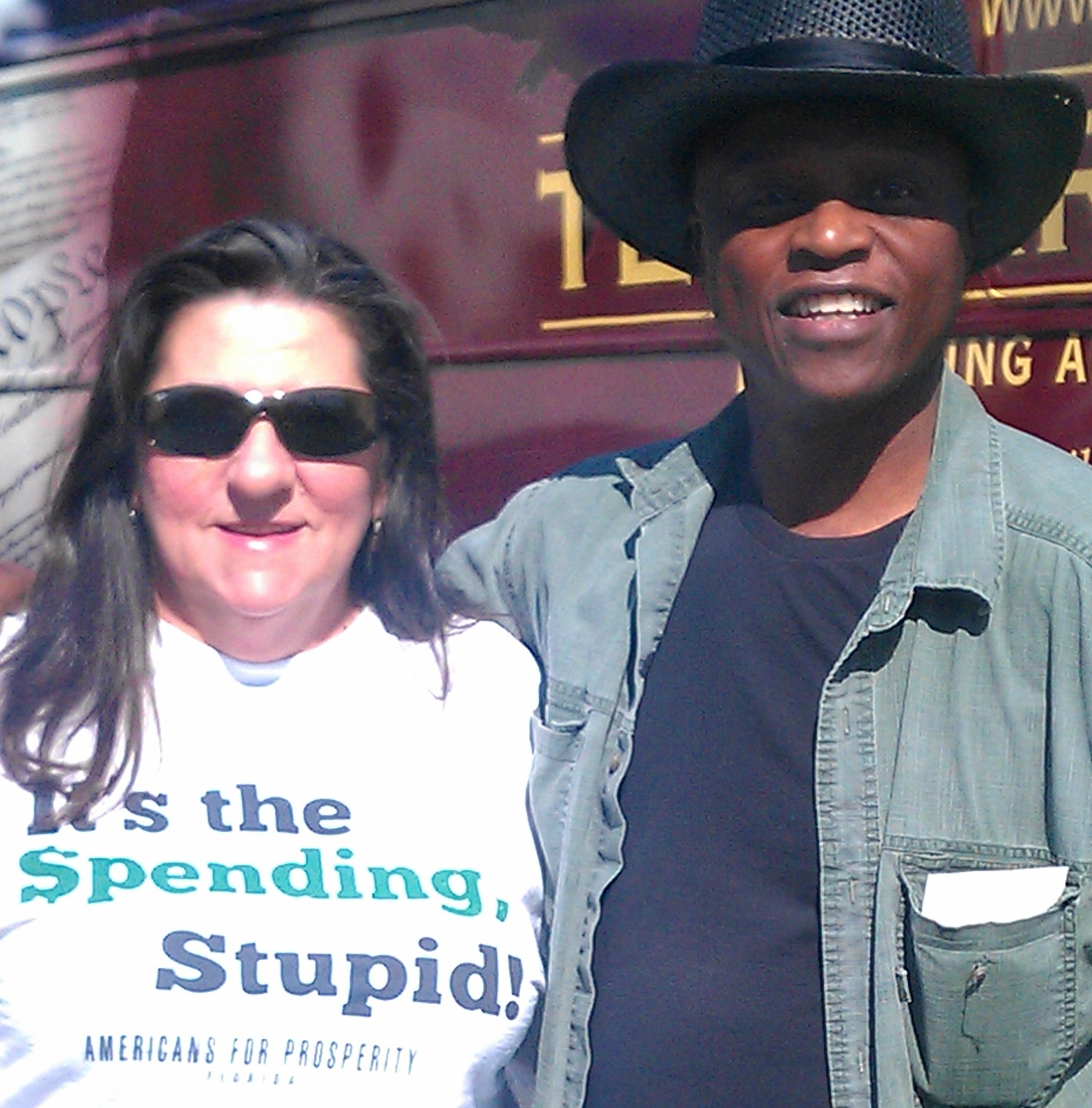 Hi Folks. Lloyd Marcus reporting in from the road with Tea Party Express. At our Winter Park, FL Tea Party Express bus tour rally, I met patriot Peggy Spencer. Peggy volunteers for Americans For Prosperity. She told me that our rally was her third tea party event this week. Peggy said the media would love to say the tea party is over, but it is not. She and her fellow patriots are very busy working for change behind the scenes.

My observation of the state of the Tea Party aligns with Peggy. As a movement, we have matured beyond being the naïve fearful-for-our-country babes we were two years ago. Tea partiers are first time candidates, authors, strategists, educators, film makers and more – each following their gifts, talents and passion to take back America.

While our Jacksonville rally was dominated by Gingrich signs, Santorum signs ruled this rally.

Liberty Counsel founder, Matt Staver gave the welcoming address at the Winter Park rally. Staver stressed the importance of making a “change” in the White House in November.

Attorney, teacher, author and speaker KrisAnne Hall joined the tour as a speaker at our Winter Park rally. KrisAnne was fired from her position as Florida Assistant State Attorney for speaking at a local Tea Party rally. KrisAnne is fired up and committed more than ever to the tea party. Our movement is alive and well.

This just in. This is a first. Attempting to leave Winter Park headed to our rally in West Palm Beach, the driver rear tires of our bus succumbed to a small Florida sink hole. We're stuck! We are waiting for a tow truck.

This was the first day of our four day Tea Party Express tour of Florida. We begin with a rally in Jacksonville, then Winter Park; Gingrich spoke at our third rally of the day in West Palm beach. On every tour, I enjoy meeting new patriots and hugging old brother and sister patriots at the rallies.

We have TV and WiFi on the tour bus. Today, while traveling on the bus, I responded to a hand full of negative emails. These doom and gloom people basically said both political parties are corrupt and I am an idiot for thinking the efforts of our Tea Party team will make a difference.

To them, I say, so what should we do? Should we park the Tea Party Express tour bus and go home? Do we simply surrender the country to Obama?

Well, I say NOT on my watch. Yes, both parties have negative issues. But, what part of four more years of Barack Hussein Obama will end America as we know it do you not understand? The stakes are far too high to stay home election day because both parties suck or because your candidate did not win the Republican nomination.

If my favorite candidate does not win the Republican nomination, I love my country far too much to have a temper tandem, stopping working to defeat Obama and stay home election day. Obama MUST be stopped. Obamacare MUST be repealed. If not, it is checkmate – the socialism, Marxist and Progressives will have won. Freedom, for which many have made the ultimate sacrifice, will be over. Government will have complete control of our lives. Good Lord people, THIS IS NOT JUST ANOTHER ELECTION!

How could anyone who claims to love this country allow it to be destroyed simply because they did not “get their way” or they felt uncomfortable voting for an imperfect candidate?

This is MY country. I love her, warts and all. I will NOT stand by and allow her to be overrun by this evil administration. As God continues to give me grace, I will fight to defend and save her against all enemies foreign and domestic.