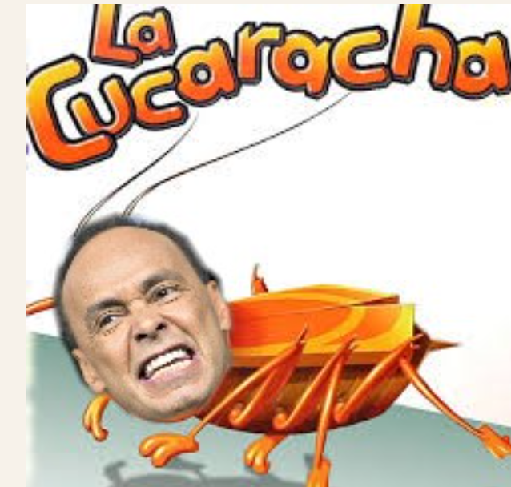 Illinois Rep. Luis Gutierrez, who represents the 4th Congressional district a gerrymandered snake-shaped district designed to protect his vitriolic incumbency, has doubled down on his criticism o  DHS head Gen. John Kelly as being unfit to wear his uniform for opposing the illegal and unconstitutional DACA program rejected by a Congress in which Gutierrez sat:

Gutierrez said Kelly, a retired four-star Marine general, is "a politician, OK, not a general."

"What could be more mean and more vicious than to say 'you've got six months to pack up...and leave the United States'?" Gutierrez asked of Kelly.

"I don't see [him wearing] a uniform," Gutierrez told the Washington Post.

Ann we don’t see Rep. Gutierrez ever wearing a uniform, unlike Gen’ Kelly’s son Robert who gave his life for his country in Afghanistan fighting to protect America and the freedom of Muslims seeking liberation from the depraved tyranny of the Taliban:

Robert Kelly, 29, was killed in a roadside bomb blast in 2010 during a foot patrol in Afghanistan's Helmand province.

Like his son, who gave his life for others who did not look like him or shared many of his beliefs, Gen. Kelly served with and commanded and witnessed the sacrifice of soldiers of all races, ethnicities and genders. He is nor a bigot, but a patriot who deserved better for seeking enforcement of the nation’s laws and Constitution than what Rep. Gutierrez gave him:

The Washington Examiner reported that U.S. Rep. Luis Gutierrez, a Democrat, took personal aim at Kelly because Kelly once reportedly spoke favorably about the program. House members reported in July that Kelly told Latino lawmakers in a closed-door meeting that he was supportive of the program, but pointed out that it was probably illegal….

“General Kelly is a hypocrite who is a disgrace to the uniform he used to wear,” the congressman said in a statement.

"General Kelly, when he was the head of Homeland Security, lied straight to the faces of the Congressional Hispanic Caucus about preventing the mass deportation of DREAMers," Gutierrez also said. "He has no honor and should be drummed out of the White House along with the white supremacists and those enabling the president's actions by ‘just following orders.'"

It is Rep. Gutierrez who has no honor as well as no respect fo American citizenship,  the nation’s laws and the Constitution he was sworn to uphold. Gutierrez has long supported open borders and even supported expanding the Deferred Action for Childhood Arrivals program to illegal parents:

For Democrats such as Grijalva and Rep. Luis Gutierrez, D-Ill., amnesty and the political benefits stemming from it are inevitable. They are quite willing to use children to exploit the inherent compassion of the American people if it means ensuring the political future of the Democratic Party through the gratitude of millions of illegal aliens allowed to come here and stay.

Gutierrez recently told a La Raza conference that it was only a "down payment" that President Obama gave the Latino community with his Deferred Action for Children Arrivals (DACA) program that halted the deportation of 600,000 of "our people":

"Now it is time for the president in the United States ... (to) free the mom and dads of the DREAMers and to go further — be broad and expansive and generous."

Unlike Rep. Luis Gutierrez, Gen. John Kelly has long  his country honorably: Gutierrez is a career politician living on the taxpayer’s dime while, like Bill and Hillary Clinton, using his office to personally enrich himself:

In Chicago, where a decade long building boom has reshaped neighborhoods, politicians have come to rely on real estate interests to donate to their campaigns. But the Democratic congressman's financial relationship with some contributors goes beyond campaign cash, according to records and interviews.

In half a dozen deals with campaign supporters since 2002, Gutierrez has made about $421,000 by investing his money in real estate deals and exiting a short time later. The congressman says he made a profit in five of those deals but lost a small amount of money on the sixth. …

The demise of DACA wouldl be a deserved end to a magnet for illegal immigration based on an unconstitutional executive order by President Barack Hussein Obama who was frustrated that Congress failed to pass it as legislation named the DREAM Act. As syndicated columnist Charles Krauthammer observed on Fox News’ Special Report at the time:

You can have executive orders that implement already existing laws. What Obama has done in the DREAM Act, which is exactly what you've talked about. Essentially he passed a law by executive order that the Congress had rejected, wouldn't pass, that is unbelievably unconstitutional. It's as if a Republican ran and said I don't like the capital gains tax, Congress rejects an abolition of that tax and then he orders the IRS not to collect it. People would be up in arms and would be impeaching. He's doing that over and over again on immigration

Even President Obama said he didn’t have the authority to do what he eventually did – enact the Congressionally rejected DREAM Act through executive order:

With respect to the notion that I can just suspend deportations through executive order, that’s just not the case, because there are laws on the books that Congress has passed — and I know that everybody here at Bell is studying hard so you know that we’ve got three branches of government. Congress passes the law. The executive branch’s job is to enforce and implement those laws. And then the judiciary has to interpret the laws.

There are enough laws on the books by Congress that are very clear in terms of how we have to enforce our immigration system that for me to simply through executive order ignore those congressional mandates would not conform with my appropriate role as President.

Was President Obama also a dishonorable hypocrite for saying the executive order on DACA had no legitimacy in the law or Constitution? Thankfully, unlike Gutierrez, we still have Americans like John Kelly and his son Robert willing to serve their country honorably even to the point of making the ultimate sacrifice.

Daniel John Sobieski is a free lance writer whose pieces have appeared in Investor’s Business Daily, Human Events, Reason Magazine and the Chicago Sun-Times among other publications