1. “The future must not belong to those who slander the prophet of Islam”

2. “The sweetest sound I know is the Muslim call to prayer”

3. “We will convey our deep appreciation for the Islamic faith, which has done so much over the centuries to shape the world — including in my own country.”

4. “As a student of history, I also know civilization’s debt to Islam.”

5. “Islam has a proud tradition of tolerance.”

6. “Islam has always been part of America”

7. “we will encourage more Americans to study in Muslim communities”

8. “These rituals remind us of the principles that we hold in common, and Islam’s role in advancing justice, progress, tolerance, and the dignity of all human beings.”

9. “America and Islam are not exclusive and need not be in competition. Instead, they overlap, and share common principles of justice and progress, tolerance and the dignity of all human beings.”

11. “Islam is not part of the problem in combating violent extremism – it is an important part of promoting peace.”

12. “So I have known Islam on three continents before coming to the region where it was first revealed”

13. “In ancient times and in our times, Muslim communities have been at the forefront of innovation and education.”

14. “Throughout history, Islam has demonstrated through words and deeds the possibilities of religious tolerance and racial equality.”

15. “Ramadan is a celebration of a faith known for great diversity and racial equality”

16. “The Holy Koran tells us, ‘O mankind! We have created you male and a female; and we have made you into nations and tribes so that you may know one another.’”

17. “I look forward to hosting an Iftar dinner celebrating Ramadan here at the White House later this week, and wish you a blessed month.”

18. “We’ve seen those results in generations of Muslim immigrants – farmers and factory workers, helping to lay the railroads and build our cities, the Muslim innovators who helped build some of our highest skyscrapers and who helped unlock the secrets of our universe.”

19. “That experience guides my conviction that partnership between America and Islam must be based on what Islam is, not what it isn’t. And I consider it part of my responsibility as president of the United States to fight against negative stereotypes of Islam wherever they appear.”

20. “I also know that Islam has always been a part of America’s story.” Now a short list of the actions of the tolerant peace loving religion of Islam.

Now a short list of the actions of the tolerant peace loving religion of Islam. 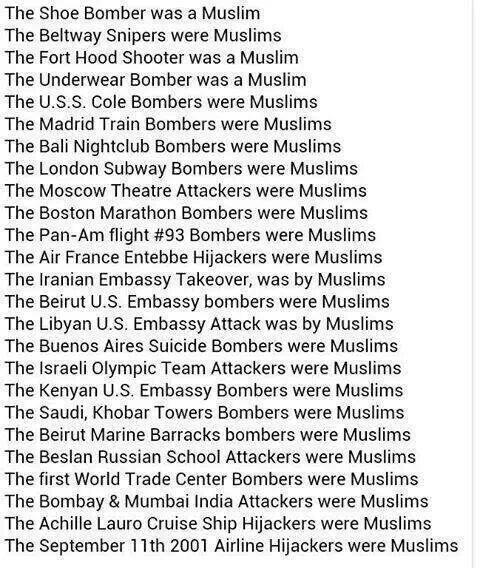