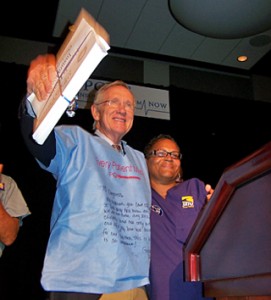 Did you know that the SEIU represents the voting machine technicians in Clark County (Las Vegas), Nevada? Is it any surprise, as we noted earlier today, that there was a voting glitch in Clark County, Nevada? The glitchcaused Harry Reid’s name to be automatically checked on the ballotbefore voters had indicated who were they were supporting.

According to Joyce Ferrara who was an eyewitness to this strange ballot ordeal, the problem waswidespread, “One person that’s a fluke. Two, that’s strange. Butseveral within a five minute period of time — that’s wrong.”

It is particularly troubling that Clark County has put the uber left-wing SEIU Local 1107 in charge of their voting machines.

The agreement between the SEIU and Clark County specifically puts all voting machines under the control of the SEIU. See the collective bargaining agreement:

The County hereby recognizes the Union as the sole and exclusive collective bargaining representative of the County employeesassigned to the classifications listed in Appendix A who are eligible tobe represented by the Union except as limited by Section 2 of thisArticle. The Union shall be notified of additions to the list
of classifications (Appendix A), within seven (7) days of posting forthe position classification and shall receive 30 days advance notice ofany deletions. Upon written request by the Union, the parties shall meetand confer regarding deletions within the 30 day notification periodreferenced herein. Both parties recognize that the Union retains itsright to appeal under the provisions of NRS 288.170.

On page 75 of the agreement, in Appendix A, Voting Machine Technician is listed as a classifiedposition that the SEIU represents. Even though the CBA expired on June30, 2010, the CBA continues until this day because of language inArticle 43 which says that the County and SEIU can continue the CBA yearto year until one party deems it unfit.

What a coincidence that the voting machines in Clark County just happen to be automatically set to support the candidate that the union that represents the “voting machine technicians” supports… You vote, we decide.

UPDATE: The President of Americans for Limited Government (the parent organization of this website), Bill Wilson, has issued a statement on this important matter developing in Nevada:

“It is positively outrageous that in Clark County, Nevada, the SEIU Local 1107, which supports Harry Reid,controls the ballot boxes by contract through their representation ofthe voting machine technicians. It is not surprising that SenatorHarry Reid’s name was automatically checked off on the ballot whenindividuals went to vote.

“The U.S. Attorney’s Office, the Nevada State Attorney General, and the U.S Marshalls need to act now to ensure that the SEIU does notcontinue to compromise the integrity of ballots in Nevada, and anywhereelse in the country. The democratic process is too precious to betampered with and abused.”

Read more at NetRightDaily.com: http://netrightdaily.com/2010/10/the-seiu-harry-reid-and-voting-problems/#ixzz13sLb3NKh
E-mail me when people leave their comments –
Follow