I confess. With 5 minutes left in the championship game, Russell Wilson's third interception and Seattle two touchdowns behind, I turned the channel assuming Green Bay won. Upon turning back to the game, I was shocked to see Seattle ahead by one point. Seattle ultimately won the game in overtime and is going to the Superbowl. During his post game interview, Wilson said despite 3 interceptions and the score, they simply kept fighting. 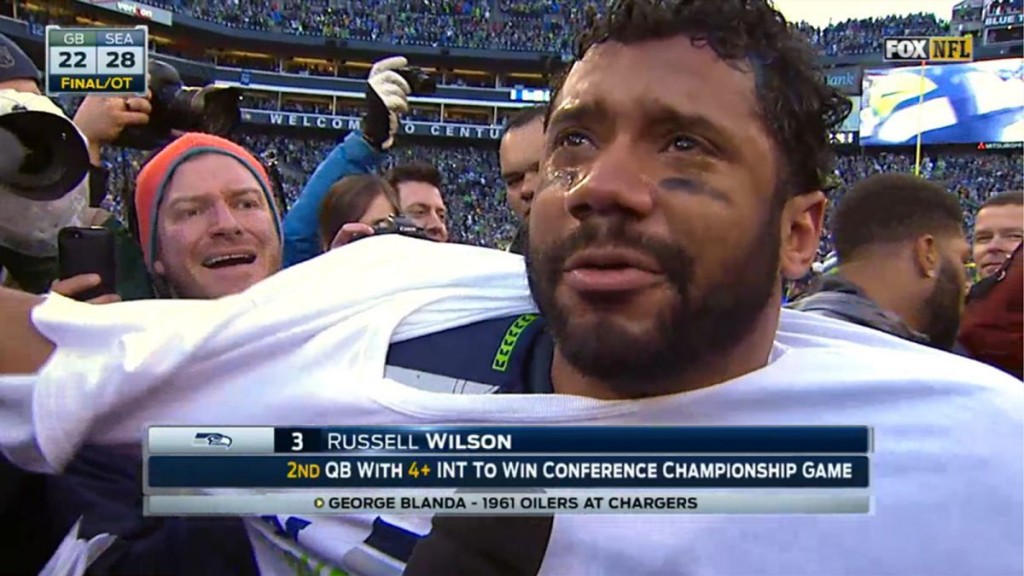 Watching the game, I watched Seattle blow numerous opportunities and make mistakes leading to turning the ball over to their opponent five times. Wilson admitted that he did not play his best game. Still, he kept encouraging his teammates to keep fighting and believing that they would win the game.

Please note that Wilson did not waste energy verbally beating up receivers for dropping balls, nor did the linemen stop blocking for their quarterback Wilson after he threw three interceptions. They stuck together laser focused on defeating their nemesis the Green Bay Packers rather than each other.

Brother and sister patriots, I hate it that we are so quick to kick a courageous patriot to the curb who fumbles the ball during an interview or is targeted by the dems and MSM for standing up for conservatism.

Shame on you folks who ran to the tall grass away from Sen Ted Cruz and Sarah Palin claiming they are simply too toxic. These two patriots are among a hand full displaying the character and guts to fight for us at their peril. Is this how you treat your friends? And then, you whine about Obama acting like our king with no one out there attempting to stop him. Well, you can not have it both ways. Whoever takes on Obama is going to be trashed by the dems and MSM.

Have you noticed the pattern? Anyone on our side who strongly pushes back against the left or does not let the racist stupid inmates run the asylum, we are told are toxic and must be kicked to the curb; less we suffer sure defeat. We have seen it happen with Cruz, Palin and others.

The latest is district attorney Daniel Donovan selected by the GOP to run for the congressional seat in NY vacated by Grimm. For crying out loud, what did Donovan do that was so horrible. He stood up for the law and did not unfairly indict in the Garner case.

It is time that we view the selection of Donovan as our candidate as an opportunity to push back against the dem's lies; make them accountable for rhetoric leading to the assassination of two police officers and painting a target on the backs of all police. It is one thing being on the defensive for doing the wrong things. It is cowardice and morally wrong to allow ourselves to be put on the defensive for standing up for what is right. http://bit.ly/1CcqfXp

During the post game interview after Seattle's extraordinary come from behind victory, I loved Wilson tearfully giving thanks to God. It was also very cool that the TV camera gave the international audience a glimpse of the Seattle team holding hands while kneeling in a prayer of thanks.

Russell Wilson encouraged his teammates to ignore their failures, shortcomings and the odds appearing against them and keep fighting which led to them emerging victorious. This is what I have been relentlessly preaching to the tea party. Evil (Democrats and the MSM) has a way of appearing all powerful. If we keep fighting with God on our side, we win!