.
McMaster: Evidence is 'Incontrovertible'
that Russia Meddled in 2016 Election 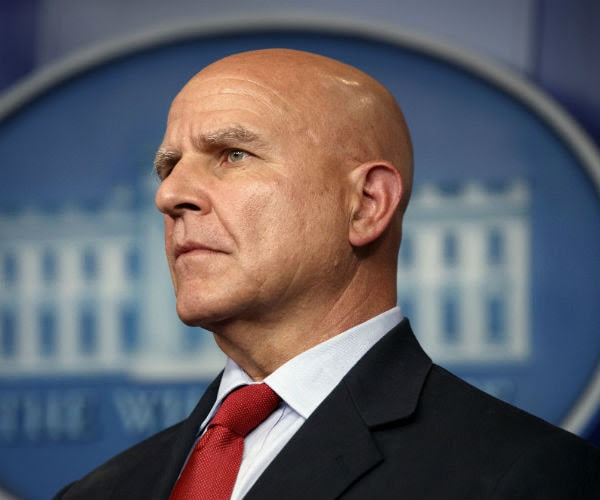 by newsmax.com
{ newsmax.com } ~ Top Russian and American officials exchanged barbs Saturday in Germany over the U.S. indictment of 13 Russians accused of an elaborate plot to disrupt the 2016 presidential election... H.R. McMaster, U.S. President Donald Trump's national security adviser, said at the Munich Security Conference that the federal indictments showed the U.S. was becoming "more and more adept at tracing the origins of this espionage and subversion."  Just minutes before, Russian Foreign Minister Sergey Lavrov had dismissed the indictments as "just blabber," according to remarks through an interpreter. In Russia, news of the indictments was met with more scorn. "There are no official claims, there are no proofs for this. That's why they are just children's statements," Andrei Kutskikh, the presidential envoy for international information security, told Russian state news agency RIA Novosti... https://www.newsmax.com/politics/mcmcaster-national-security-2016-election-meddled/2018/02/17/id/843946/?ns_mail_uid=29878495&ns_mail_job=1779578_02172018&s=al&dkt_nbr=010102cf25it
.
Sen. Nelson STOP LYING
About Watch List-Gun Legislation 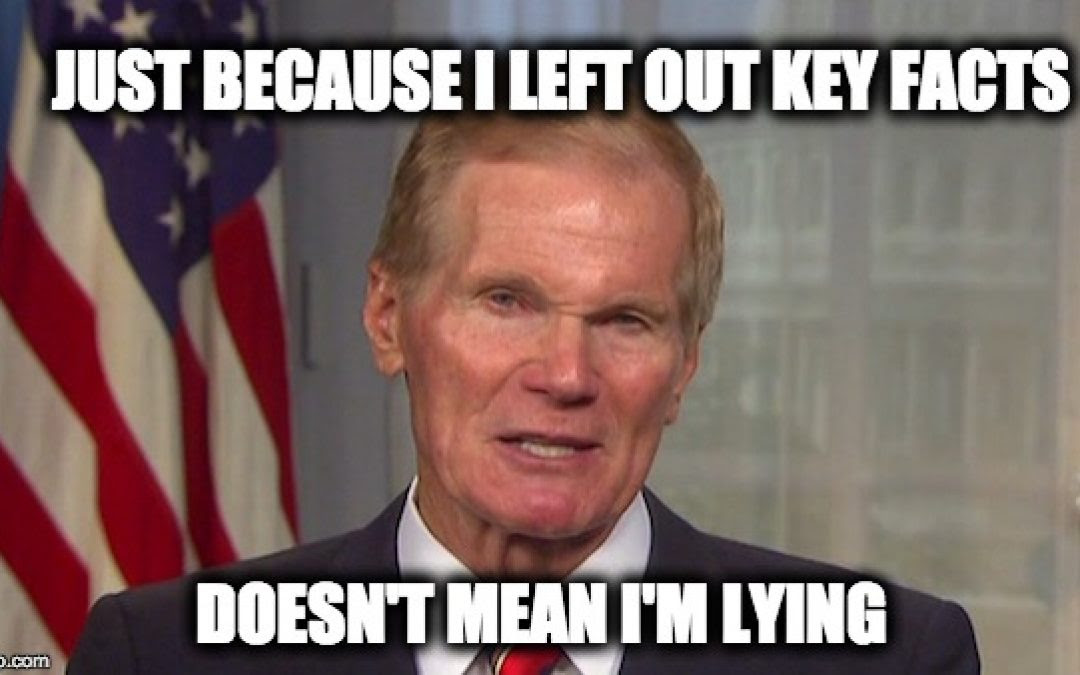 by Jeff Dunetz
Wednesday before we even found out the scope of the massacre at a Parkland Florida High School... Senator Bill Nelson (D-Fl) was ripping his colleagues for the lack of gun legislation. Nelson was technically correct… but he was being totally dishonest at the same time. Nelson spoke about the Senate’s inability to pass legislation preventing people on the terror watch list from owning guns but left out pertinent facts.  Yes, it’s true a Democratic Party legislation to ban anyone on the watch list to own a gun was rejected by the Senate, but not because of the idea behind the legislation but because not everyone on the list deserves to be on the list. But when a version of the same bill was presented by  Sen. John Cornyn (R-Tx)  that added a provision for people to receive due process, that would give the government 72 hours to prove that the person deserved to be on the list was rejected by the Democrats and only received 53 of the necessary 60 votes By the way, the NRA was a supporter of the Cornyn bill but Senator Nelson voted no!...  https://lidblog.com/lying-about-watch-list-gun-legislation/
.
LNG episode exposes
feeble Jones Act argument

by Keli'i Akina, Ph.D
{ grassrootinstitute.org } ~ A hard winter in the northeast United States has led to greater demand for liquid natural gas (LNG)... a product that is produced abundantly in the U.S. So why did LNG that arrived in Boston at the end of January come from Russia — and in violation of liar-nObama-era sanctions against Russia? As The New York Times  explained, some fancy footwork in the transfer of the gas between international terminals helped it sidestep the law that would block Russian gas from being imported. But why did Boston bring in LNG from Russia instead of Louisiana? Because of the Jones Act, that’s why. This outmoded federal law forces goods traveling between U.S. ports to do so on ships constructed and flagged in America, with primarily U.S. crews. This certainly would add to the cost of shipping LNG from one U.S. port to another — except that there aren’t any Jones Act-compliant U.S. vessels that can carry LNG to begin with! In fact, an American shipyard hasn’t constructed an LNG carrier in nearly four decades...   http://www.grassrootinstitute.org/2018/02/jones-act-national-security-threat/?utm_source=heritagefoundation&utm_medium=email&utm_campaign=theinsider&mkt_tok=eyJpIjoiWldVNVlUTTJaak5pWVRZeSIsInQiOiJJT0ZlSVQ5SURRS0RoekM1R2dtcUtRY1BnWk5iUlBYZ3VyclV5akRtMGlJbWp5TDZnT0d4VG12c2czVzBKa1liWThcL0hnYURkbVpSUmcybUt3akpLZ24rcEpPUUlsbytFUEtuS3BjOThCZGN1aVRIbEdQUjk1VWlLdWZ5TlhCbksifQ%3D%3D
.
While Everybody Slept, Congress did
Something Extraordinary for
Vulnerable Children by Aída Chávez and Ryan Grim
TUCKED QUIETLY INTO the most recent congressional measure to keep the government open... was the most sweeping and ambitious piece of child welfare legislation passed in at least a decade. It’s an attempt to reshape the entrenched foster care system as a raging opioid epidemic swells the population of children in need. The measure overcame the opposition of group homes, which  pocket thousands of dollars per month for each child warehoused in their custody. The Family First Prevention Services Act upends the funding structure for the child welfare system by allowing states to use federal matching funds for programs addressing mental health, substance abuse, family counseling, and parent skills training — to keep at-risk children from entering the foster care system in the first place. It’s meant to help families stay together. Most new programs are funded by specific amounts of money, which makes them vulnerable to cuts or expiration in the future, but the new law amends the Social Security Act to open up funding for families at risk of entering the foster care system. That means major funding will be available in states willing to take advantage of the new federal money...  https://theintercept.com/2018/02/11/foster-care-congress-did-something-extraordinary-for-vulnerable-children/?utm_source=The+Intercept+Newsletter&utm_campaign=e6f1998e62-EMAIL_CAMPAIGN_2018_02_09&utm_medium=email&utm_term=0_e00a5122d3-e6f1998e62-131896129
.
‘Disappointing’ That American Social Media
Companies Succumbed to Kremlin’s Pressure 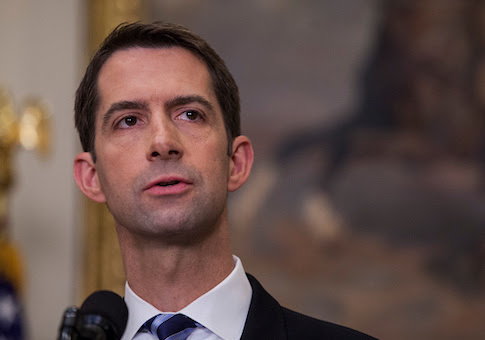 by David Rutz
{ freebeacon.com } ~ Sen. Tom Cotton (R., Ark.) said Friday it is "disappointing" that social media companies would assist in the Russian government's censorship... of opposition leader Alexei Navalny. "It’s disappointing that these social-media companies, supposedly dedicated to freedom of expression, would shut down one of the few voices of opposition to Vladimir Putin just a month before Russia’s elections," Cotton said in a statement. "Putin’s henchmen don’t need any help rigging the results, and it’s not asking too much to expect American companies to defend American values in all corners of the globe." Instagram reportedly bowed to a court order to block access to a post that embarrassed an oligarch and top government official, according to the Washington Post. Navalny's team discovered Instagram posts of metals magnate Oleg Deripaska and Deputy Prime Minister Sergei Prikhodko on a yacht in Norway... http://freebeacon.com/national-security/cotton-disappointing-that-american-social-media-companies-succumbed-to-putin-pressure/?utm_source=Freedom+Mail&utm_campaign=ef347fa910-EMAIL_CAMPAIGN_2018_02_16&utm_medium=email&utm_term=0_b5e6e0e9ea-ef347fa910-45611665
.

.
The Left's Loathsome Indifference Toward MS-13

by Jordan Candler:  According to MSNBC’s Joy Reid, the transnational crime syndicate MS-13 is a nothing burger. “[Trump] makes it sound like the biggest issue in the United States … is MS-13, a gang nobody that doesn’t watch Fox News has ever heard of,” she recently crowed. And according to author Stephen King, MS-13 is the name of a gun. After reading a tweet from Rick Wilson, who said, “You’re … a lot more likely to be killed in [Florida] by an opioid overdose than MS-13,” King responded: “Don’t tell that to the parents of the kids who got shot in Broward County today, sport.”

Here we have a perfect example of the ignorance that permeates every leftist from political talking heads to esteemed authors. Joy Reid could be right — most Americans may not know who or what MS-13 is. And that’s the problem. Stephen King certainly doesn’t. As The Daily Wire notes, “King, apparently unaware that MS-13 is a violent street gang comprised of mostly illegal aliens, attacked Wilson for his tweet because he thought that Wilson was speaking about Wednesday’s tragic shooting and he somehow thought MS-13 was a firearm.” No doubt he conflated the two because MS-13 mimics the acronym AR-15, an actual firearm that was used in Wednesday’s despicable shooting in Florida.
It’s a sad commentary on the state of our society that it can recognize what an AR-15 is (with the important caveat that most people have no idea how it works) but has absolutely no clue what MS-13 is nor about the criminals who constitute it. The AR-15 is a tool that people who represent the worst in our culture use to take innocent life — people like those inside MS-13. These are perpetrators who lethally utilize tools in their crusade against dignity. They, not the methods, should be our focus. Here’s a little background on this ruthless group called MS-13:
According to the Department of Justice, most MS-13 members originate from El Salvador. In the 1980s, the gang was implanted in the U.S. by way of Los Angeles, where it took off like wildfire. It has a particularly sizable pool of members in New York, Virginia and Washington, DC, but it’s active in 40-some states. Globally, it’s only 30,000 members strong, but one-third of them (10,000) reside here in the U.S. If there’s one word that describes this group, it’s a pursuit of unbridled “control.” And while much of its machinations might occur clandestinely, its impacts can’t be ignored. Nor can its occasional rampages.
Donald Trump was proactive about singling out MS-13 and its brutality during his State of the Union Address. He relayed a September 2016 incident on Long Island in which friends Kayla Cuevas and Nisa Mickens “were brutally murdered by the savage MS-13 gang while walking together in their hometown.” There are other instances of these gangsters ruthlessly killing innocent Americans. One example: In January 2017, Damaris Alexandra Reyes Rivas, also a teenager, was impaled 13 times by an MS-13 member.
MS-13 operates in much the same way Muslim terrorist groups do in the Middle East. The FBI reports that “MS-13 is expanding its membership at a ‘moderate’ rate through recruitment and migration. Some MS-13 members move to get jobs or to be near family members — currently, the southeast and the northeast are seeing the largest increases in membership. MS-13 often recruits new members by glorifying the gang lifestyle (often on the Internet, complete with pictures and videos) and by absorbing smaller gangs.” Interestingly, and quite tellingly, the media treats MS-13 gang members the same way it does Muslim terrorists — by ignoring them.
One reason the Left feels obligated to ignore MS-13’s atrocities could be because to do otherwise also puts an unwanted spotlight on inner-city gangs, whose continual development in cities like Chicago are the direct result of leftist-instilled policies that promote urban poverty plantations. More broadly, the Left also sees the spotlight on MS-13 as a symptom of the Trump administration’s supposedly bigoted attitude toward immigration. But its silent response to both only emboldens more reckless behavior.
Attorney General Jeff Sessions has moved to ensure this his Justice Department is prioritizing the complete eradication of MS-13. And for that he was roundly mocked by the Left. As was Trump for mentioning MS-13 in his State of the Union Address. But make no mistake: Those who ignore or refuse to recognize this bona fide criminal syndicate do so at the expense of innocent American lives.   ~The Patriot Post
https://patriotpost.us/articles/54169-the-lefts-loathsome-indifference-toward-ms-13