.
ICE Director Homan Sets dummucrats-Dems
Straight on His Last Day on The Job

by rickwells.us
{ rickwells.us } ~ In an interview on his last day on the job as Acting ICE Director, Tom Homan was vocal in his defense of the agency... and the men and women who defend our borders. He’s asked for his reaction to the threats by politicians, actors and other leftist propagandists against his agency. Homan says, “They need to educate themselves,” citing as a glaring example the fact that ICE doesn’t work on the border and isn’t “separating families” there, that it is the Border Patrol, so they’re obviously don’t even understand the basics of what is going on. He says the Border Patrol is doing the right thing, pointing out that the same thing happens to US citizens every day all across this country. “When you arrest a parent, and you put them in jail, many times that child has to go to child protective services because there’s no one there to protect them. So what these open borders people want, they want better rules for illegal alien families than we have for US citizen families.”...   https://rickwells.us/ice-director-democrats-job/
VIDEO:  https://www.youtube.com/watch?v=NR-awvwIMls
.
John Brennan, the Revolutionary Who Never Grew Up

by GEORGE NEUMAYR
{ spectator.org } ~ The media talks endlessly about “norms,” then lionizes leftists who shatter them. John Brennan is a beneficiary of this gross hypocrisy... The more he engages in monstrously abnormal and irresponsible behavior for a former CIA director, the more the media builds him up. Imagine a former CIA director under a dummycrats-Democratic president calling for members of the executive branch to defy his lawful directives, blithely spreading grave charges against him without evidence, and calling on the “country” to “defeat” him. The media would treat that figure as a dangerous weirdo. But Brennan has done all of that and more, and it has only enhanced his appeal in the eyes of the media. “A Spymaster Steps Out of the Shadows”—that’s the New York Times’s idea of a hard-hitting take on a former CIA director who is calling in effect for insurrection. In the first paragraph of this essentially friendly, punch-pulling profile, we learn that Brennan refuses to recognize Trump as a duly elected president...
https://spectator.org/john-brennan-the-revolutionary-who-never-grew-up/?utm_source=American+Spectator+Emails&utm_campaign=a623a4e910-EMAIL_CAMPAIGN_2018_06_29_06_09&utm_medium=email&utm_term=0_797a38d487-a623a4e910-104608113
.
Rosenstein Gets 7 Days To Come Clean to House;
Faces Impeachment, Contempt if He Fails 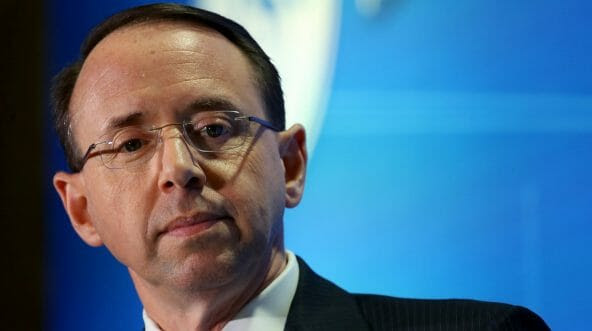 by BEN MARQUIS
{ westernjournal.com } ~ Various committees of the House of Representatives have gone round and round with the leadership of the FBI and Department of Justice... specifically Deputy Attorney General Rod Rosenstein, over a perceived deliberate lack of compliance with repeated requests for the production of certain documents related to particular investigations. Many  conservative lawmakers have accused Rosenstein of being a “deep state” swamp creature hack that is purposefully hiding or withholding those documents in order to cover up criminal misdeeds or embarrassing examples of political bias or incompetence at the DOJ and FBI. Of course, Rosenstein has denied that he is hiding or withholding anything without valid reason — such as the need to keep sensitive information relevant to ongoing investigations, sealed indictments, subpoenas and warrants under wraps for the time being — and has vowed to cooperate with all Congressional requests to the best of his ability...
https://www.westernjournal.com/ct/rosenstein-7-days-clean-house-faces-impeachment-contempt-fails/?utm_source=Email&utm_medium=conservativebyte&utm_campaign=dailyam&utm_content=libertyalliance
.
California dummycrats-Democrat Arrested For Death
Threats Toward FCC Chairman Ajit Pai and His Family

by sundance
{ theconservativetreehouse.com } ~ A California man was arrested today in Los Angeles on charges of threatening to kill the family of Ajit Pai... Chairman of the Federal Communications Commission, for Pai’s role in repealing regulations relating to net neutrality. According to court documents, on or about Dec. 19 and 20, 2017, Markara Man, 33, of Norwalk, allegedly sent three emails to Chairman Pai’s email accounts. The first email accused Chairman Pai of being responsible for a child who allegedly had committed suicide because of the repeal of net neutrality regulations. The second email listed three locations in or around Arlington, and threatened to kill the Chairman’s family members. The third email had no message in its body, but included an image depicting Chairman Pai and, in the foreground and slightly out of focus, a framed photograph of Chairman Pai and his family. The FBI traced the emails to Man’s residence in Norwalk, California, and when initially confronted in May 2018, Man admitted to the FBI that he sent the email threatening Chairman Pai’s family because he was “angry” about the repeal of the net neutrality regulations and wanted to “scare” Chairman Pai...
https://theconservativetreehouse.com/2018/06/29/california-democrat-arrested-for-death-threats-toward-fcc-chairman-ajit-pai-and-his-family/
.
The Left's Overreaction to Justice Kennedy's Retirement | LevinTV
by crtv.com
{ crtv.com } ~ The Left hates the Constitution and demands that the President nominate a new Supreme Court justice who hates it too.
VIDEO:  https://www.crtv.com/video/ep472--the-lefts-overreaction-to-justice-kennedys-retirement
.

by Jordan Candler:  In a piece devoted to Justice Anthony Kennedy’s departure, National Review’s David French lays out the case for why the “the consequences of Kennedy’s retirement — both legal and political — are immense.” Justice Kennedy is universally regarded as a swing jurist. French observes that “he wrote or joined a number of solid opinions that protected and reaffirmed core constitutional liberties, including liberties protected by the First and Second Amendments.” But Kennedy also “served as the primary judicial guardian of abortion rights and was more responsible than any other justice for the relentless legal march of the sexual revolution.” Therefore, the addition of another originalist will be unquestionably influential.

The Washington Examiner editorial board highlights six pivotal cases that could be overturned without Justice Kennedy: Roe v. Wade, which “struck down all state abortion restrictions in 1973” (Kennedy himself voted in support of Planned Parenthood v. Casey in 1992 — a case that would have overturned Roe v. Wade); Kelo v. New London, which in 2005 “re-established that private property can be taken from owners through eminent domain for nonpublic uses”; Obergefell v. Hodges, which “established in 2015 that all states are constitutionally mandated to recognize marriages between two people of any sex”; Massachusetts v. EPA (2007), which mandates that “the Environmental Protection Agency must regulate carbon dioxide”; U.S. Term Limits, Inc. v. Thornton (1995), which stipulates that “individual states … may not set rules for would-be members of Congress that are more restrictive than what’s outlined in the U.S. Constitution”; and Kennedy v. Louisiana (2008), which “blocked the expansion of the death penalty for violent crimes where the victim did not die and was not intended to be killed.”
Kennedy’s departure doesn’t mean all of these will be overturned in the near future. Some (most?) may not be overturned at all. However, another originalist at least denotes that all of these cases face the possibility of being reversed. French ends his op-ed with a cautionary tone: “We’ve been here before. We’ve had opportunities to remake the Court. President Reagan and the first President Bush together appointed a majority of the Supreme Court. Yet Roe endured, and the Court even moved left on key issues.” True enough. However, many of the people on Trump’s Supreme Court list are exceptional, bona fide conservative candidates. It’s certainly not unrealistic to envision an A-team-caliber Supreme Court majority whose decisions will result in a defense of life (literally), Liberty and justice unforeseen in our modern day.
~The Patriot Post
https://patriotpost.us/articles/56846?mailing_id=3589&utm_medium=email&utm_source=pp.email.3589&utm_campaign=snapshot&utm_content=body