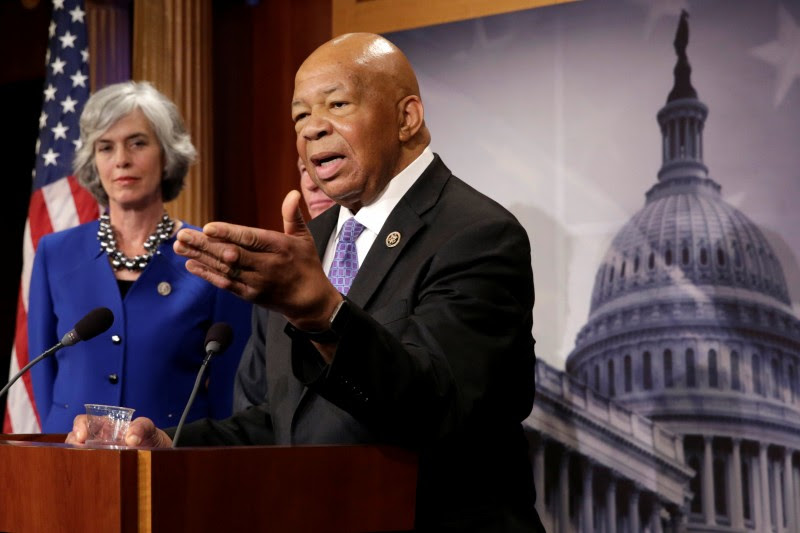 by David Rutz
{ freebeacon.com } ~ President Donald Trump tweeted Friday that his administration was giving "strong considerations" to release detained illegal immigrants into sanctuary cities... saying such a maneuver would make liberals who support open borders "very happy." His announcement followed a Thursday Washington Post report that the White House had considered such a proposal, which included statements given to the Post by the White House and Department of Homeland Security that such an idea had been considered and quickly rejected. "Due to the fact that Democrats are unwilling to change our very dangerous immigration laws, we are indeed, as reported, giving strong considerations to placing Illegal Immigrants in Sanctuary Cities only," Trump wrote. "The Radical Left always seems to have an Open Borders, Open Arms policy – so this should make them very happy!" The Post reported Trump's White House had suggested moving detained illegal immigrants to the small- and mid-sized cities at least twice in the past six months, with Speaker Nancy Pulosi's (D., Calif.) San Francisco congressional district among the possible locations. According to the report, acting Immigrations and Custom Enforcement (ICE) Director Matthew Albence opposed the idea when deputy director in November after senior Trump adviser Stephen Miller spoke to ICE about it. Trump has been a strong critic of so-called "catch-and-release" laws; under the current system, detainees can go where they please after being processed and released but have to tell the government their address. With migrants crossing the border in increasing numbers, the U.S. asylum system is at risk of being overwhelmed...
https://freebeacon.com/issues/trump-were-giving-strong-considerations-to-placing-illegal-immigrants-in-sanctuary-cities/?utm_source=Freedom+Mail&utm_campaign=fbad430745-EMAIL_CAMPAIGN_2018_03_19_COPY_03&utm_medium=email&utm_term=0_b5e6e0e9ea-fbad430745-45611665
.
ThinkProgress Attacks commie-Sanders for Changing Rhetoric on Millionaires
After He Became One 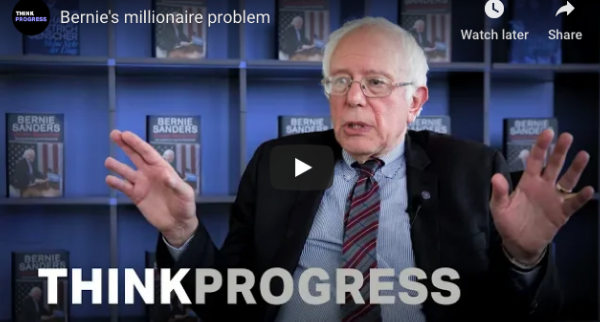 by Cameron Cawthorne
{ freebeacon.com } ~  released a video on Thursday attacking Sen. commie-Bernie Sanders (I., Vt.) for his recent admission that he was a "millionaire."... commie-Sanders, who is running for president again,   acknowledged earlier this week in an interview with the New York Times that he was a millionaire and said, "If you write a best-selling book, you can be a millionaire, too." ThinkProgress, a liberal news site and  editorially independent project of the Center for American Progress Action Fund, released a video on their Youtube page called, "commie-Bernie's millionaire problem." The video said that commie-Sanders has been railing against "millionaires and billionaires" for several years and then showed multiple clips of commie-Sanders referencing them. The video referenced how commie-Sanders "slightly tweaked" his rhetoric following his 2016 presidential run when his book royalties made him a millionaire. ThinkProgress proceeded to show a line graph of commie-Sanders's income based on his financial disclosure forms and how he stopped attacking millionaires after his book, Our Revolution, was released in November 2016, making him a millionaire. Instead of attacking millionaires and billionaires, the video shows him only going after billionaires and multi-millionaires in one case. Waleed Shahid, the spokesperson of Justice Democrats and a former commie-Sanders staffer, slammed the video as "embarrassing," adding that he was "very confused."...
https://freebeacon.com/politics/thinkprogress-attacks-sanders-for-changing-rhetoric-on-millionaires-after-he-becomes-one/?utm_source=Freedom+Mail&utm_campaign=fbad430745-EMAIL_CAMPAIGN_2018_03_19_COPY_03&utm_medium=email&utm_term=0_b5e6e0e9ea-fbad430745-45611665
VIDEO:  https://www.youtube.com/watch?v=ee8GedvPmBU
.
Seeking Israel From the Left

by Joseph Bottum
{ freebeacon.com } ~ Israel has always been a Rorschach test for the left, Susie Linfield argues in her new book about intellectuals' writings on the first decades of the Jewish home state. And she's right... if not quite in the way she may have intended the metaphor. Yes, Israel is like a Rorschach test, in the sense that many people over the 60 years of the country's existence have seen in its abstract representation some strange specificity wrought by their own fervid imagination. But Israel is like a Rorschach test in another and more important way. Something disturbing is revealed when the symmetrical inkblots of a Rorschach test provoke descriptions of violence and hatred. And something just as disturbing is revealed when the image of Israel provokes ferocious anger and unrelenting hostility. Which it does, for a large percentage of the left these days. In her introduction and conclusion, Linfield points out that Israel was created by people who were often socialists, and it enjoyed considerable support among leftists in the West into the 1960s. But somehow, these days, Israel faces a violent antipathy from the left. An important task for historians lies in exploring how that reversal came about. Linfield, a journalism professor at NYU, is a self-proclaimed leftist worried about the ways in which anti-Zionism has led to a surge of anti-Semitism. And yet, despite her interest in the question of why the left has rejected Israel, she attempts something different in The Lions' Den. In essence, she attacks the premise. Examining the work of prior generations of prominent intellectuals and journalists, The Lions' Den suggests that Israel has always provoked strange notions in intellectuals...  https://freebeacon.com/culture/seeking-israel-from-the-left/?utm_source=Freedom+Mail&utm_campaign=791d1ad16e-EMAIL_CAMPAIGN_2019_04_12_07_18_COPY_01&utm_medium=email&utm_term=0_b5e6e0e9ea-791d1ad16e-45611665
.
Enough: Democrats Need
to Do Something About Ilhan Omar
by restoreamericanglory.com:  Since arriving in Congress, Muslim Democratic congresswoman Ilhan Omar has done little else but make anti-Semitic remarks, accuse other lawmakers of being paid off to support Israel, and generally make a bigoted ass out of herself... But with her latest remarks, Omar has gone too far. When you are a sitting congresswoman who thinks it is fine to downplay and dismiss the worst terrorist attack to ever land on American soil, sorry, but you’ve gotta go. If Democrats remain silent on this latest outrage, they will demonstrate to the country that it is that they are every bit as un-American as their most strident critics have said.At a Council on American-Islamic Relations fundraiser in March, Omar waxed fondly about the founding of CAIR – an organization which has, by the way, been identified as a major funding source for the Palestinian terrorist group Hamas. That she was even at such a fundraiser would be enough to raise questions about her own “dual loyalty,” if we were inclined to play Omar’s game. But it was what she said, and how she said it, that has sparked outrage among Republicans, military veterans, and anyone who remembers the fateful day of September 11, 2001. “CAIR was founded after 9/11 because they recognized that some people did something, and that all of us were starting to lose access to our civil liberties,” Omar said. Really? “Some people did something?” That’s how you choose to describe the event that destroyed two of our most enduring buildings, took down four commercial jets, put a gaping hole in the side of the Pentagon, and killed 2,996 people? What kind of monster are you?... She got to go along with her Muslim friends and commie-AOC.
http://www.restoreamericanglory.com/breaking-news/enough-democrats-need-to-do-something-about-ilhan-omar/
.

.
Jordan Peterson on Why Socialism Is Attractive

Political Editors:  Excerpts of Jordan Peterson’s remarks in a discussion he had with The Daily Signal’s Genevieve Wood:

It’s easy to understand why people are emotionally drawn to the ideals of socialism, let’s say the left, because it draws its fundamental motivational source from a primary compassion that is always there in human beings, and so that proclivity for sensitivity to that political message will never go away. It’s important to understand that. You have to give the devil his due, unfortunately.

The problem with the radical left is that it assumes that all hierarchies are tyrannical, and it makes no distinction between them. And that’s an absolute catastrophe because there’s plenty of sins on the conscience of the West as a civilization. But we can’t throw the baby out with the bathwater, and there are far worse places. … People also don’t understand that, and they also don’t understand this is something that’s of particular importance.

They also don’t understand … the knowledge of how rapidly we’re making economic improvements around the world, in the developing world, for example, how fast that’s happening. That is not well distributed knowledge, that between the year 2000 and the year 2012, the rate of absolute poverty in the world fell by 50%.

I am not a fan of the radical left. And I understand the motivations on the radical left, both on the postmodernist end and on the more Marxist end. Because of that, I’m a relatively effective critic, and that makes me very unpopular. And that’s fine because … because what people are being taught, that’s emerged from that brand of absurd and surreal philosophy, is of no utility as a guiding light to anyone.

It’s a catastrophe to take young people in their formative years, when they’re trying to catalyze their adult identity, and to tear the substructure out from underneath them and leave them bereaved. I do believe that that’s what the universities—on the humanities end, and to some degree on the social science end—fundamentally manage to achieve.